Navigation
Hi friends! How are ya? I truthfully wasn’t sure if I’d get a blog post up today because I was having some major issues uploading photos to the blog this morning. I’m not sure what was up but eventually the pictures uploaded with no error message, so here we are. Woop! Now about our weekend…

Our weekend was filled with family fun since my father-in-law came in town. Ryan’s dad is a very go-with-the-flow kind of guy so our visits with Greg are typically similar to our usual family weekends at home which is so nice. Greg shares a lot of our interests and is always up for our random family adventures. He also really enjoys working out with Ryan so we kicked off our weekend with a big family trip to the YMCA!

You better believe I used our trip to the gym as an excuse to blast The Greatest Showman Pandora station again. Can’t stop with that one! We settled the boys in childcare while the adults hit the weight room floor and I peeled away to do the following upper body burner: 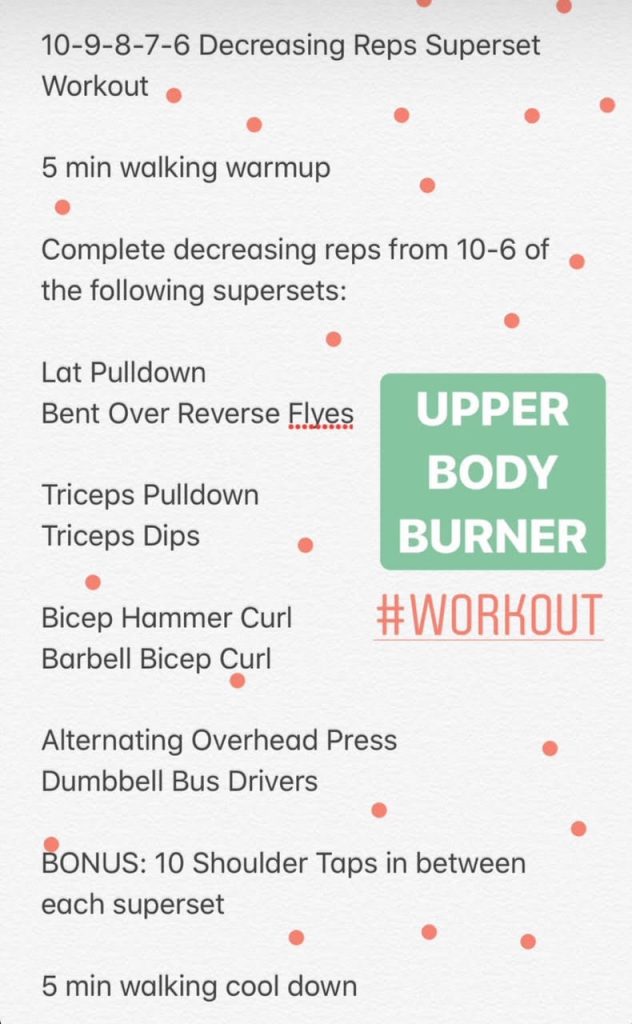 It was a good one and a great way to start the weekend on an active note. Since weekend workouts aren’t a given around here, I find myself really loving and appreciating Saturday mornings that incorporate some kind of movement, whether it be a gym workout, boot camp class or a long family walk. It just seems to set the tone for a fun and active day ahead! 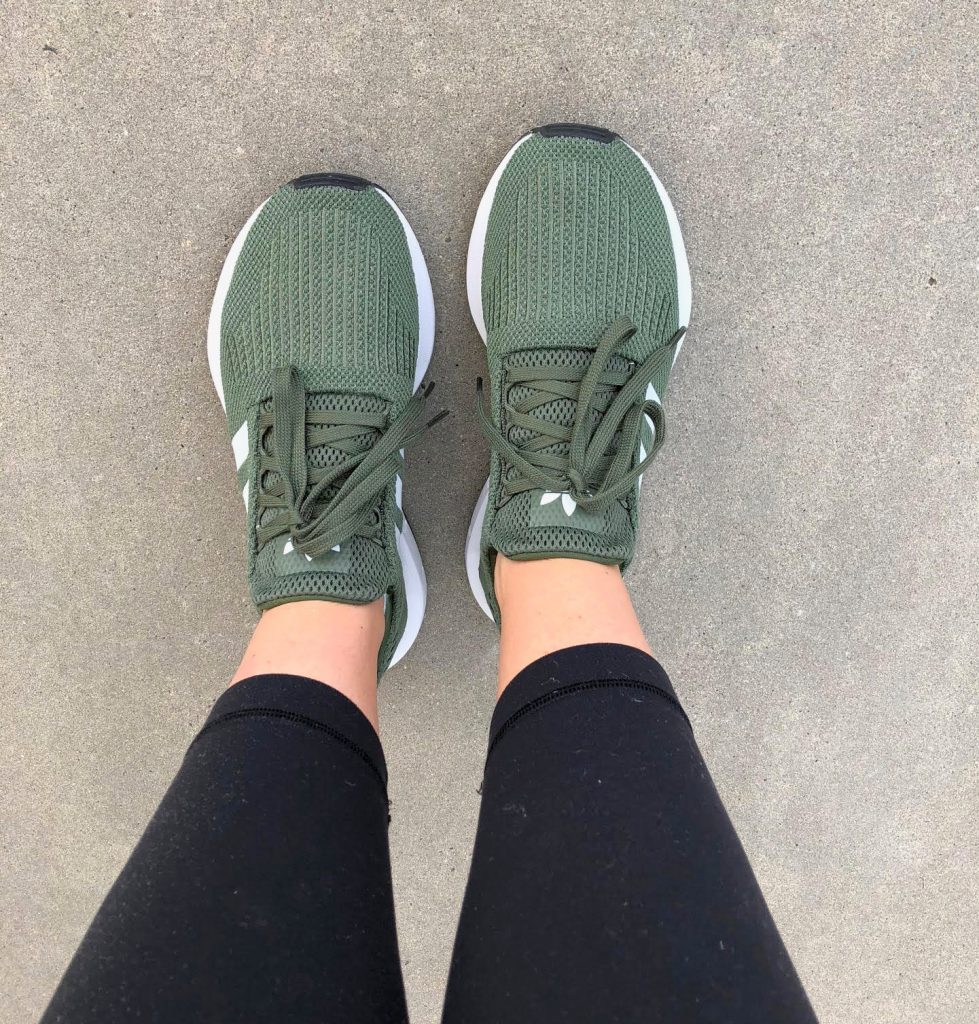 (Quick shout out to my new Adidas sneakers! They were a total impulse buy when I saw them on Zappos. I’m a huge sucker for olive green anything and they called to me! If you like them, definitely order at least a half size or maybe even a full size down because they run BIG.)

After our time at the gym, we drove over to our friend Ben’s neighborhood pool for some swimming, splashing and sunshine! Ben’s pool is the BEST because it has a shallow area for kids that has water slides. Chase LOVES them… as long as Dad goes with him to help him be brave. 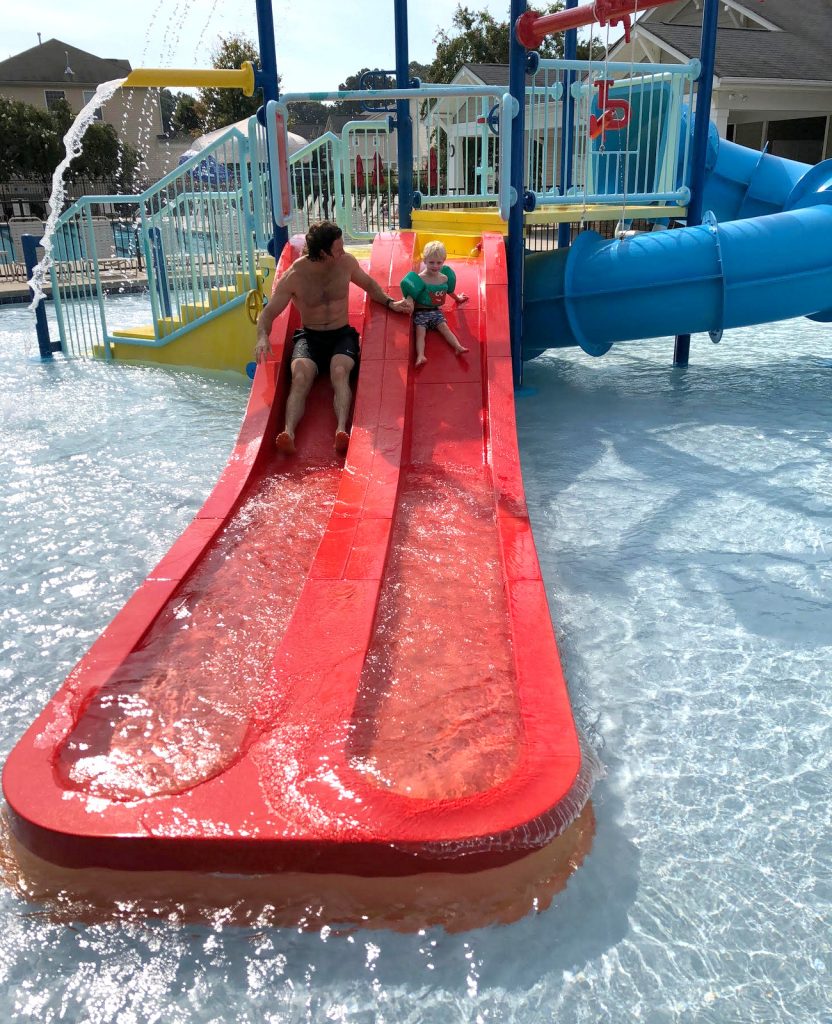 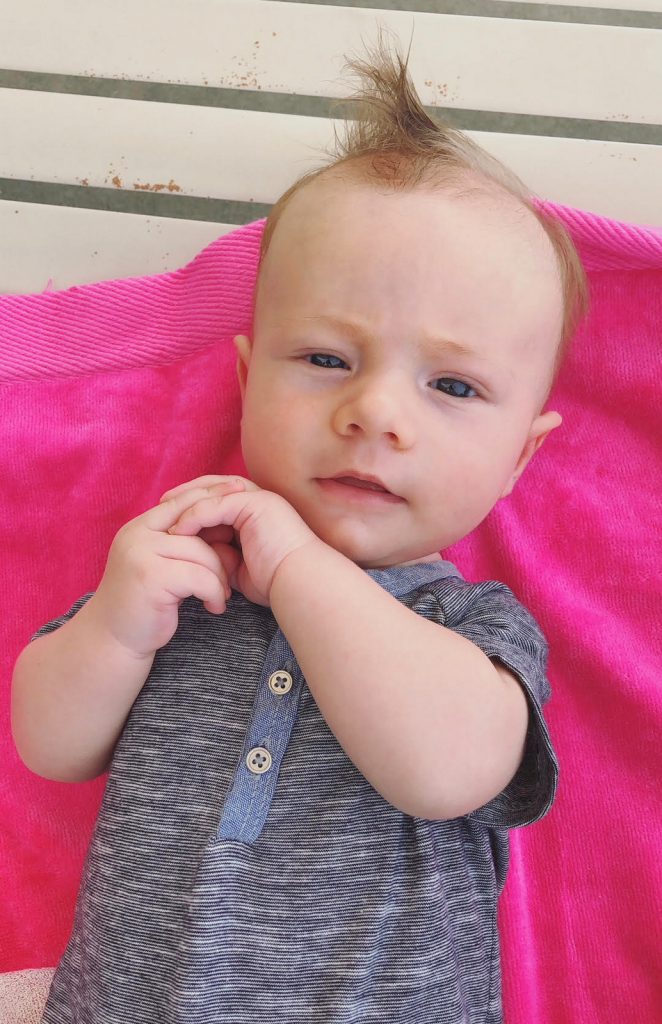 We made our way back home around lunchtime and dug into chicken adobo that I prepped earlier in the morning with Chase’s help. Chase went down for his nap a little after 1 p.m. and every other man in our house — Ryan, Greg and Ryder — followed suit. A quiet house!? On a Saturday!? I took full advantage of the four sleeping boys and worked away on my computer before wrapping two gifts for upcoming birthday parties, scanning some documents for our accountant and cleaning up around the kitchen. Fun stuff, I’m tellin’ ya.

Once everyone was back up, we hung out at home, ate a snack and then headed off on our evening adventure. Ryan randomly drove by the Iredell County Fair on his way home from a work event last week and said he thought it might be something the whole family would enjoy. It’s been a hot minute since I’ve been to a county fair so I was pumped! 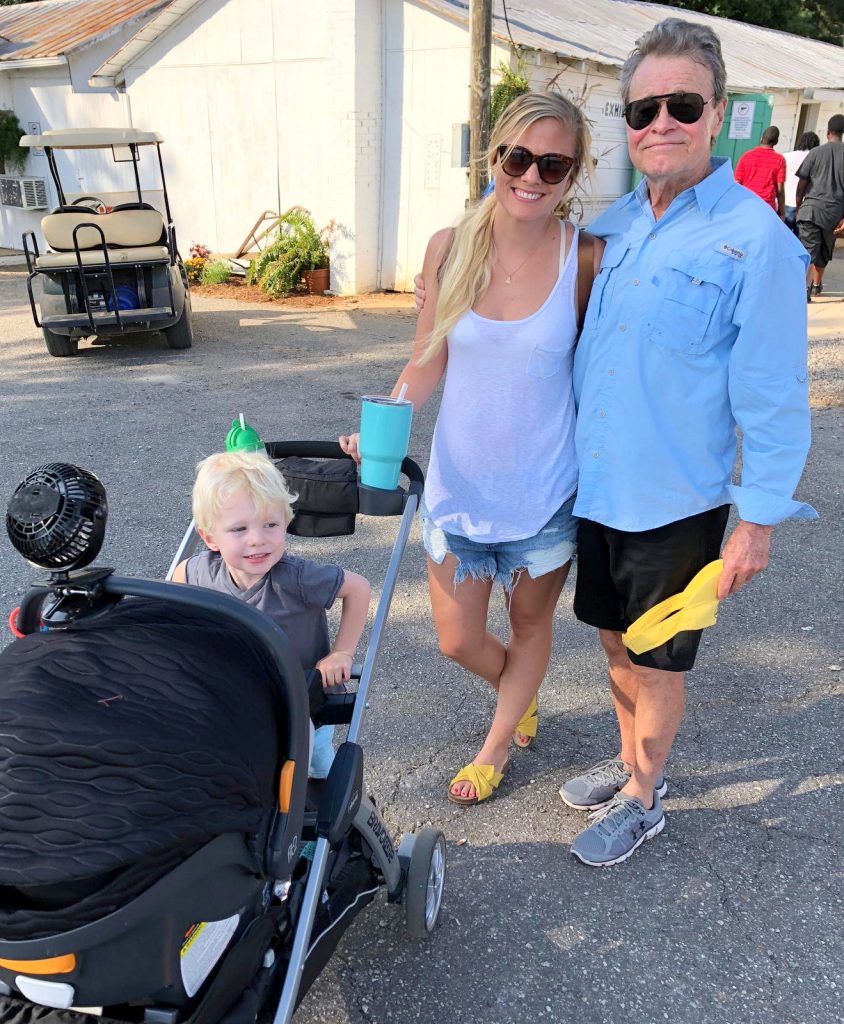 It was rather toasty outside but we made the most of the time we spent at the fair and had a ball watching Chase ride a bunch of the kid-friendly rides. Ryder was such a champ and chilled in his stroller with his portable fan. Angel baby, I’m tellin’ ya! 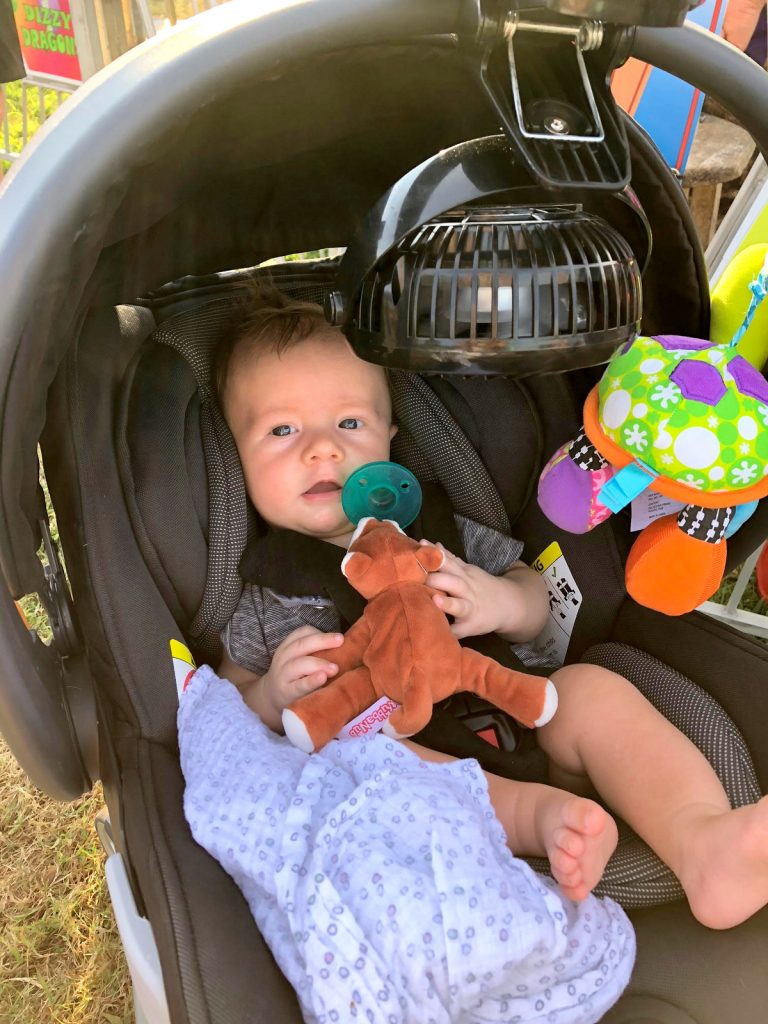 Chase’s favorite rides at the fair were the merry-go-round and the rides that let him drive a tractor and a firetruck. He was in his element! 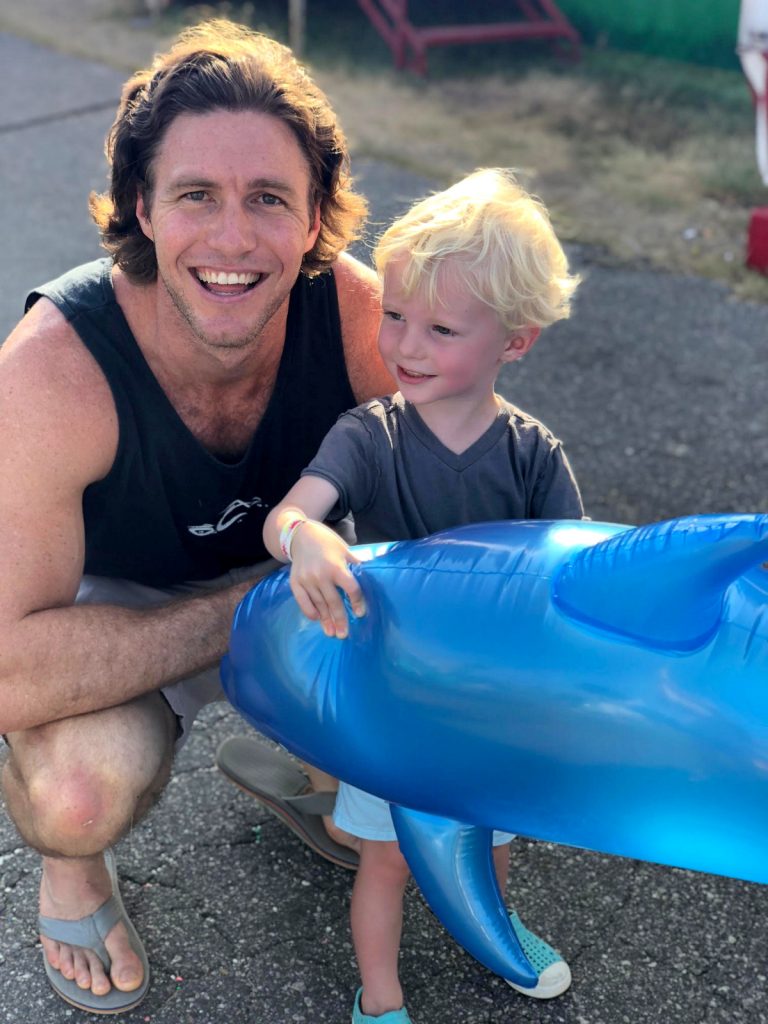 We also let Chase play a fishing game that won him a prize of his choice. It’s no surprise our marine-loving child picked the giant inflatable dolphin but I maaay have steered him in that direction since every toy that inflates can be deflated at home. Parenting pro tip right there! 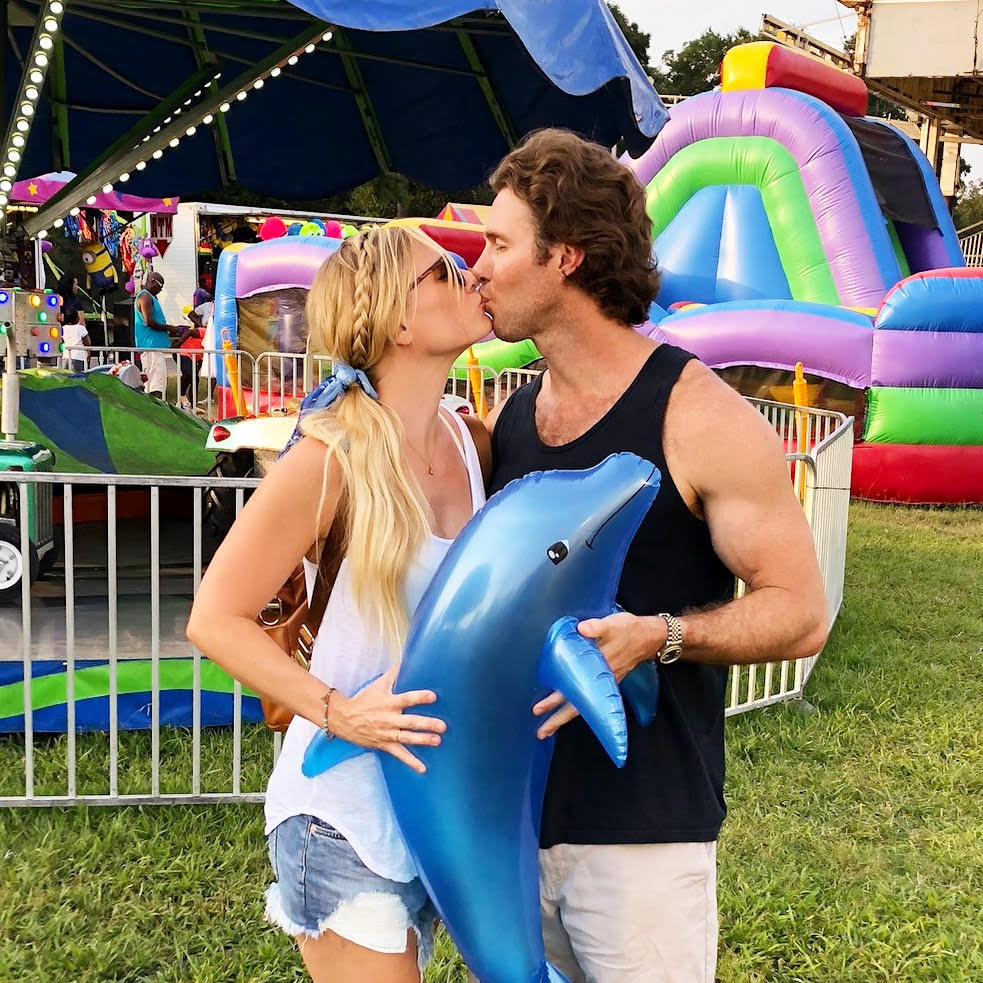 As we made our way around the fair, we saw a giant slide that immediately piqued Ryan’s interest and he got Chase all hyped up about it, too. I was shocked at how Chase immediately headed up the stairs with no hesitation and had a blast as he flew down the slide with Ryan. I wanted in on the fun and took Chase for round two. Let’s just say between me and Chase one of us was significantly braver on the giant slide than the other.

By the time we made it home, we had just enough time for later-than-usual baths and everyone crashed hard. Such a fun Saturday!

We eased into our Sunday morning and hung out around the house for the first few hours of the day. Eventually we made it to Carrigan Farms for some late morning apple picking and a hayride! The apples were rather spotty and mushy this year but we found a few “jackpot trees” filled with some yummy looking apples and managed to fill our bags. 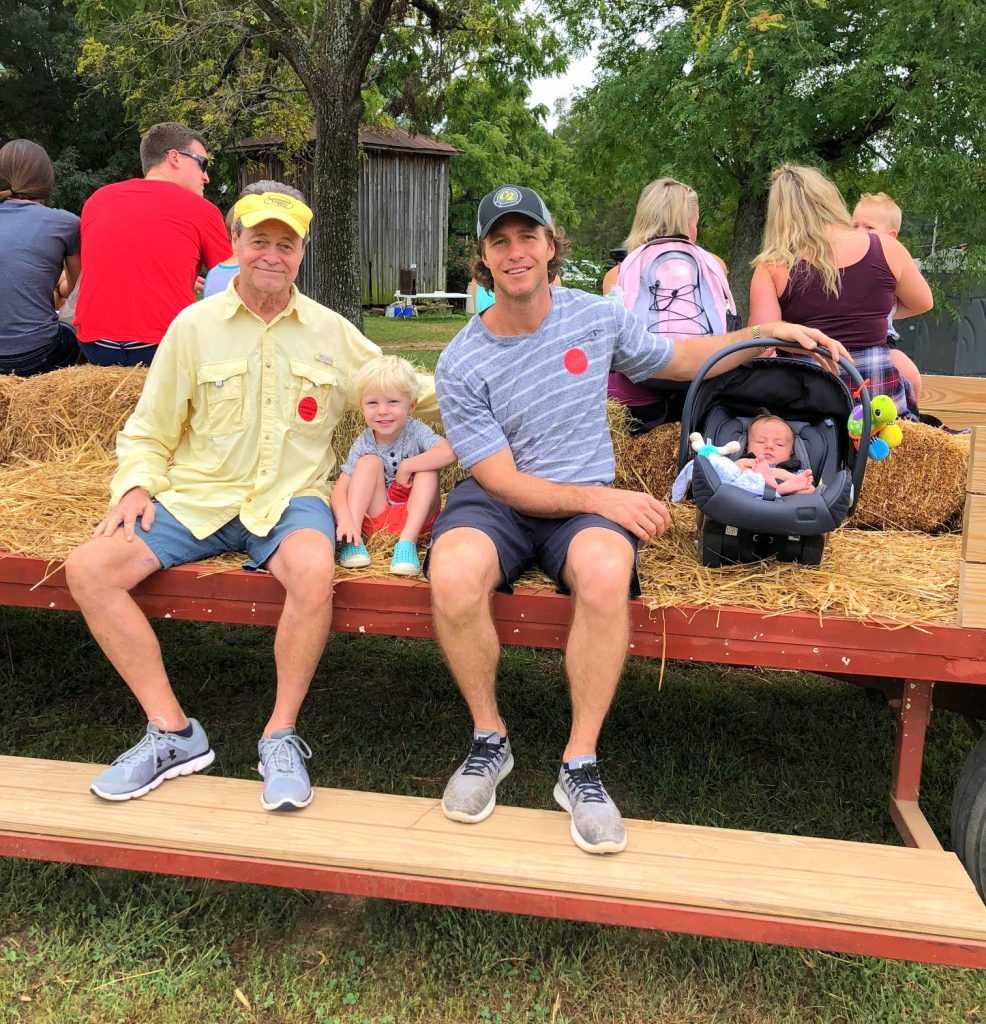 The hayride was the highlight for Chase and I have a feeling we’ll be doing our best to make it on as many hayrides as possible this fall! (We brought our jogging stroller for Ryder which worked well since he ended up snoozing in his car seat most of the time.) 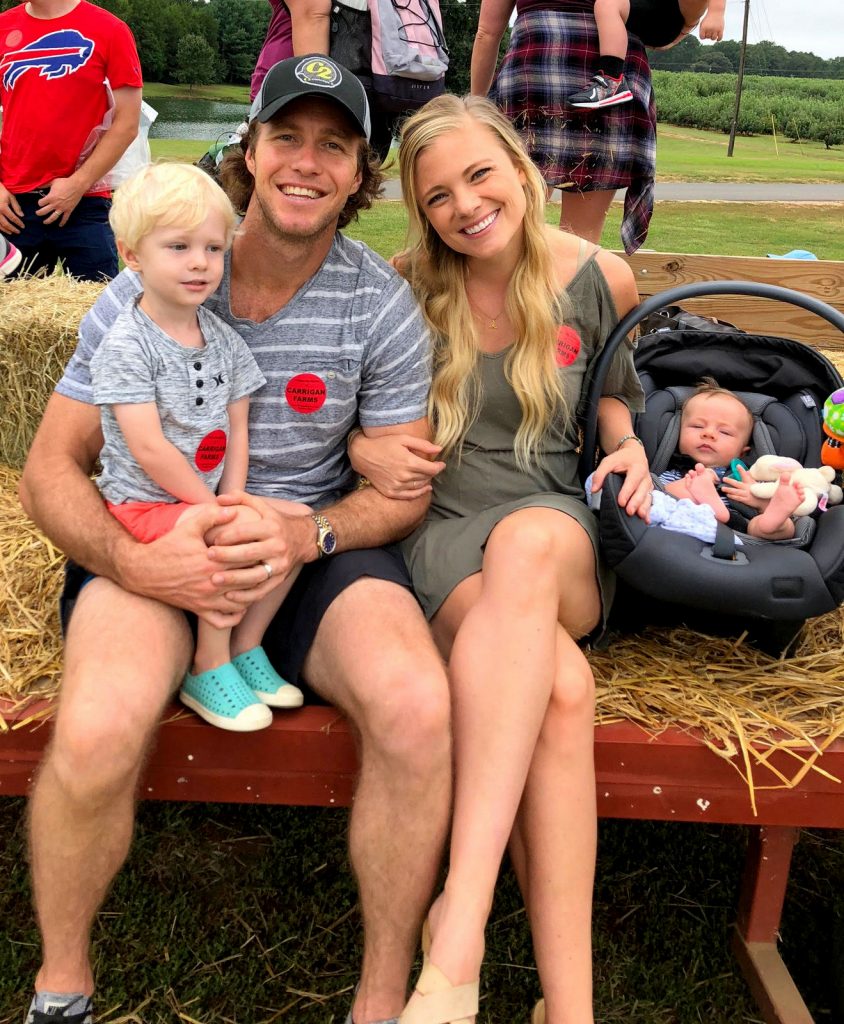 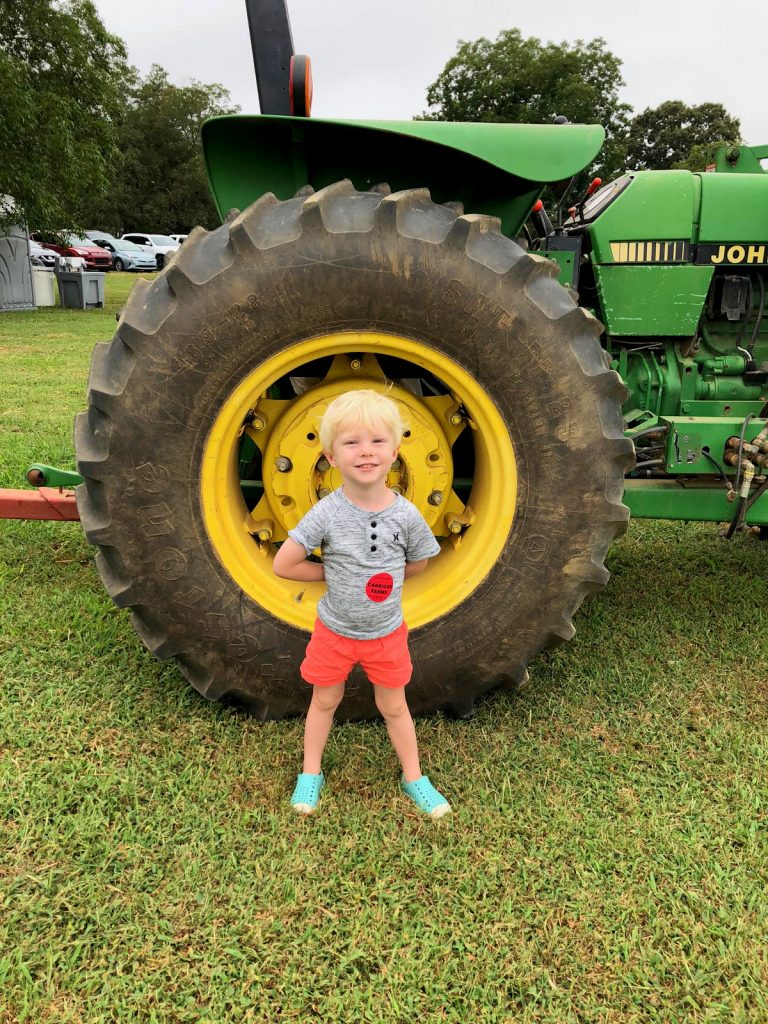 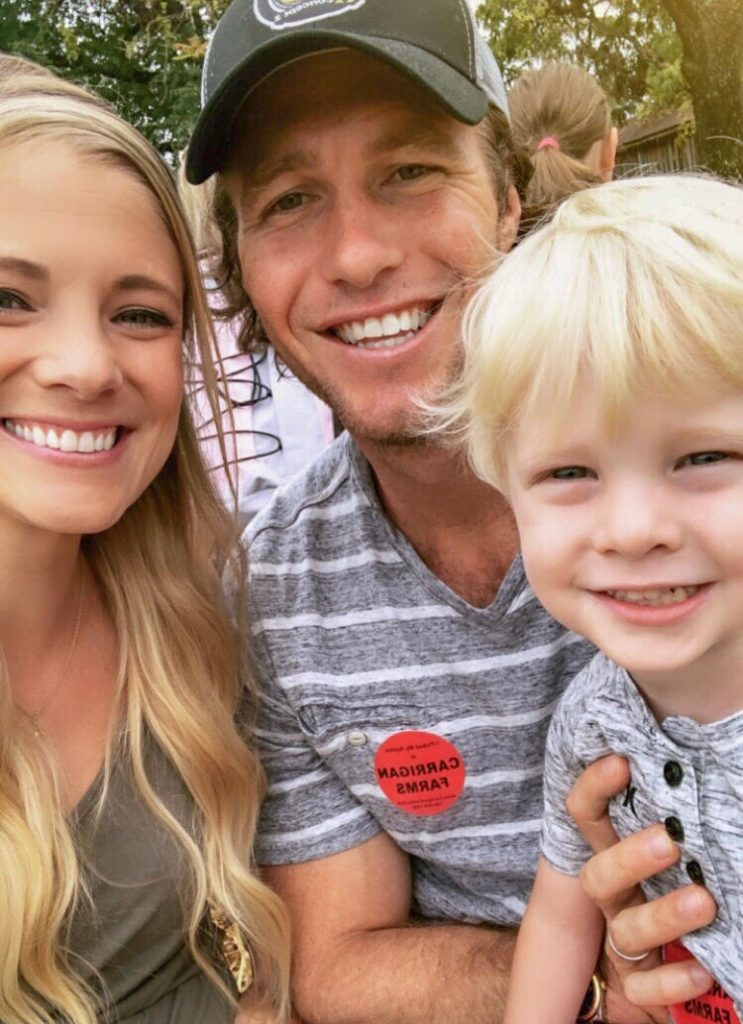 With so many apples on hand, I knew I wanted to make a few apple treats for our crew and whipped up a batch of whole wheat apple muffins and apple crisp when we arrived home. I placed the apple crisp in the fridge so we could easily pop it in the oven for dessert later that evening. 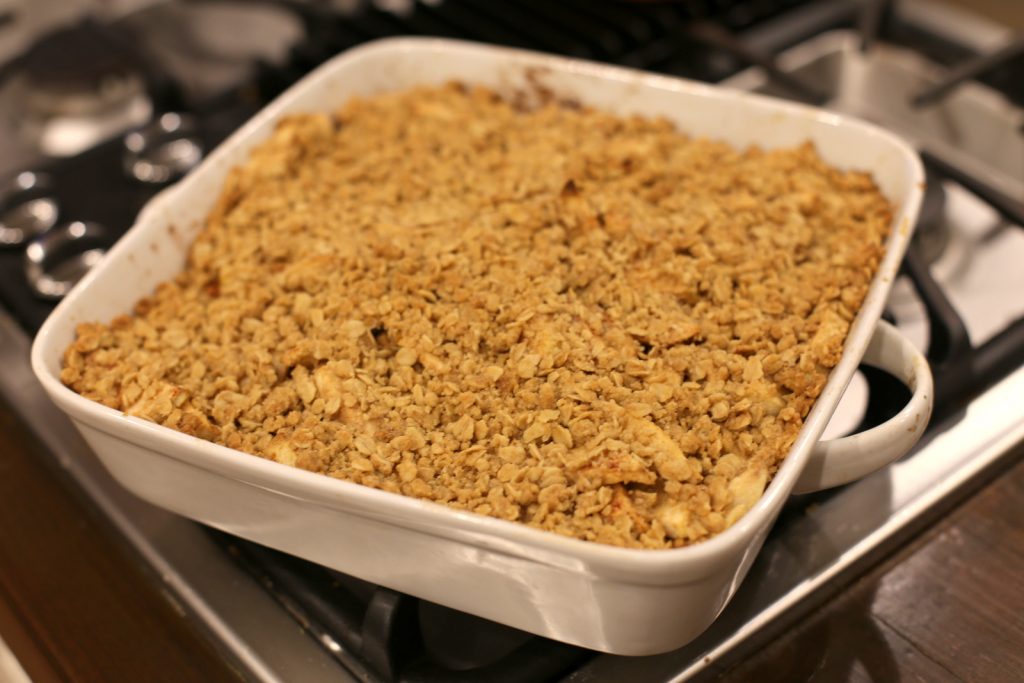 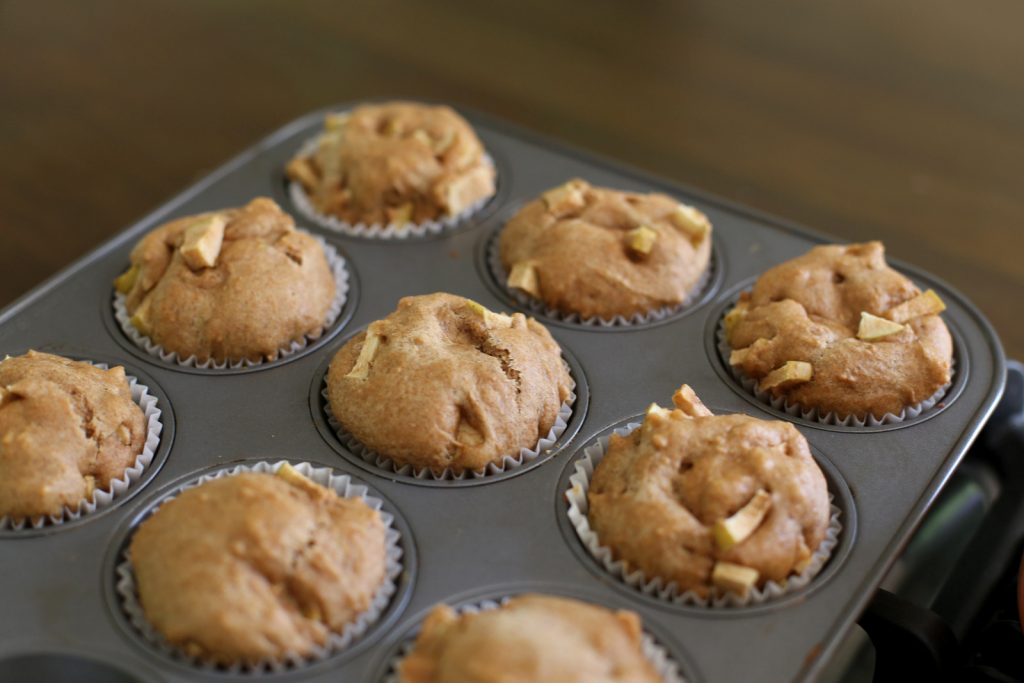 The rest of our Sunday was a good one! Ryan and his dad headed into the city for the Panthers game and I took Ryder and Chase over to a friend’s house to celebrate a birthday after nap time. The party was a lot of fun but it was the kind of party that left me feeling like I talked to everyone and no one at the same time because the minute Ryder would start fussing, Chase would need something and vice versa. Let’s just say I was more than ready for an early bed time when we made it home!

I think the week ahead should be a good one! My father-in-law is in town through tomorrow morning so we’ll be soaking up the last of our time with Greg before getting back into the normal swing of things around here. I hope you all had a great weekend!