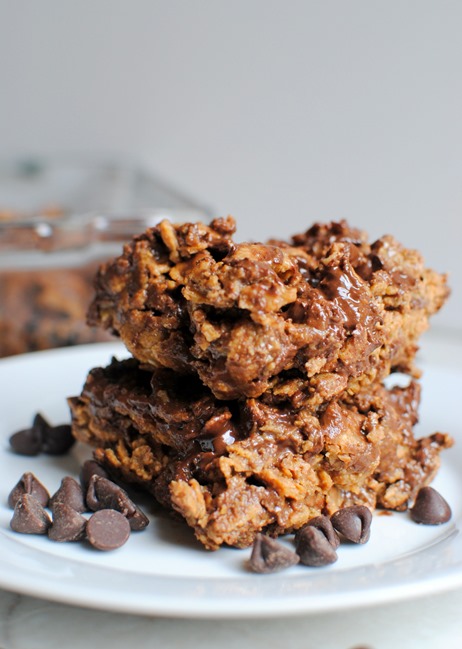 Let me begin this blog post by saying I absolutely love our baby more than anything in the entire world. He brings me so much happiness and joy every single day and is, without a doubt, the light of my life. 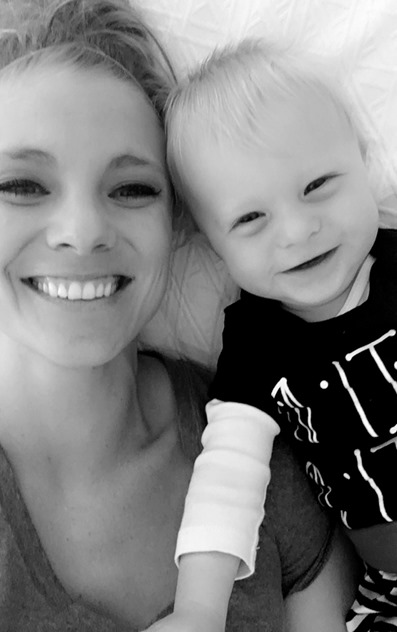 But, just to be real, I must admit that even though Chase constantly turns my heart to mush, he sure can kick my butt, too! Though our weekend included a lot of fun activities, it also included a lot of fussy baby moments that left me feeling a little exasperated at the end of every day.

I think a lot of it stems from the fact that Chase wants to crawl but just can’t master it yet. He whines to be held but when I hold him he twists and wiggles and wants to be put down. Once he’s on the floor, he immediately pops up on his hands and knees only to inchworm his way toward whatever catches his eye at the moment, which completely exhausts him and causes him to whine and fuss and want to be held again. And so, for the past week or so, we’ve repeated this cycle over and over again, all day every day.

Chase isn’t waking up as happy and playful as usual but seems to wake up from his naps feeling antsy and determined. He’s grunting a lot, rolling around like crazy and so darn active but his normally cheery demeanor isn’t lasting as long as usual and it can be a bit exhausting. According to my Wonder Weeks app, Chase is right in the middle of a leap marked by a lot of fussiness which makes me feel a little better about all of this since I don’t really know what to do to keep our little man happy other than distract him with a lot of fun activities outside of the house. So that’s exactly what we did this weekend!

Like most of last week, Saturday morning was a bit dreary around here but when the rain finally subsided around 8:30 a.m., we were all itching to get outside!

In Florida, it rained almost every day in the summer but the rain would last for an hour and sunshine quickly followed. In North Carolina, it doesn’t rain much, but when it does, rain seems to last all day which can make me a little stir crazy. Three rainy days in a row were absolutely killin’ Sadie and gave me some serious cabin fever. I was ready for some time outside and while Ryan went to the gym, my sister and I took Sadie and Chase for a morning walk around the neighborhood. Chase entertained us with lots of tongue clicks while we covered two miles. By the time we made it home, Chase was ready for a nap and while he napped, Leslie packed for her afternoon travels home and we got ready for the day ahead.

Once Chase woke up, we all headed off to Discovery Place KIDS which seemed to be on everyone’s list of things to do on a cloudy Saturday morning because the place was slammed! 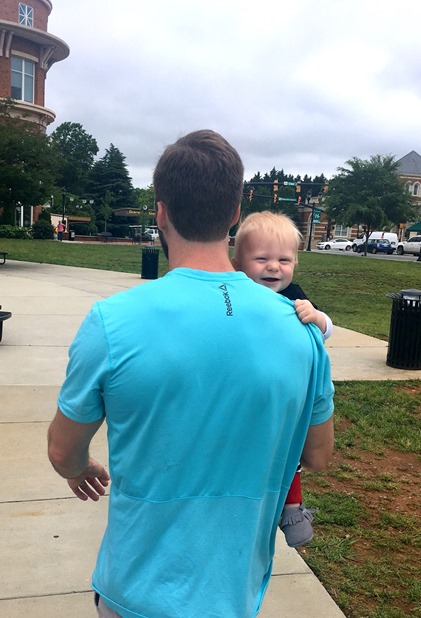 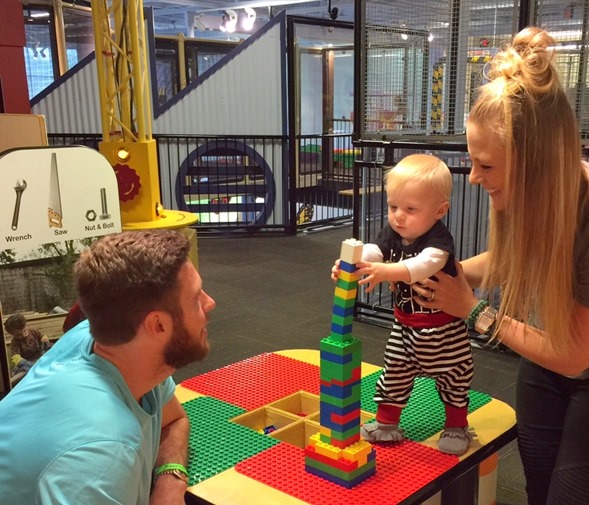 I’ve never seen the place so busy, but we still had fun at the water table, Lego station and other random exhibits. I loved watching Leslie and Chase have a ball together and seeing Chase look to his Aunt Leslie for fun, games and silly faces warmed my heart! 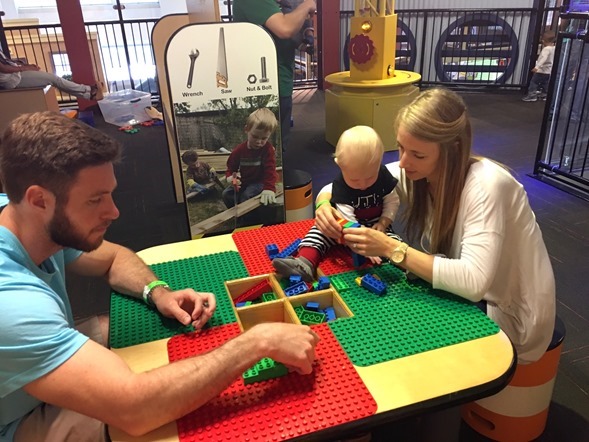 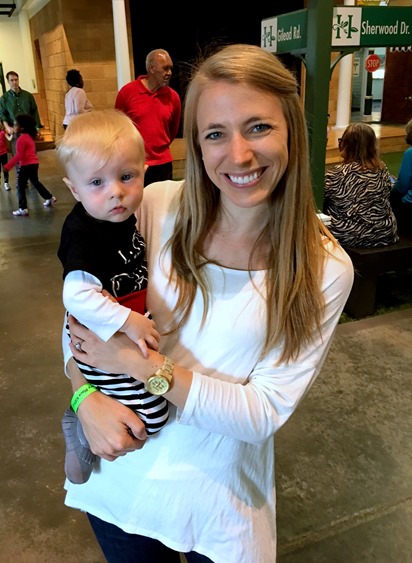 Our time at Discovery Place KIDS was cut a little short because we had to take Leslie to the airport to catch an early afternoon flight back home to Florida. I absolutely hate saying goodbye to my sister but she’s hoping to make it back to Charlotte for Chase’s first birthday at the end of July so at least we have something on the calendar to look forward to in the coming months.

After our goodbyes, I felt a little sad and decided to drown my sorrows in peanut butter and chocolate. 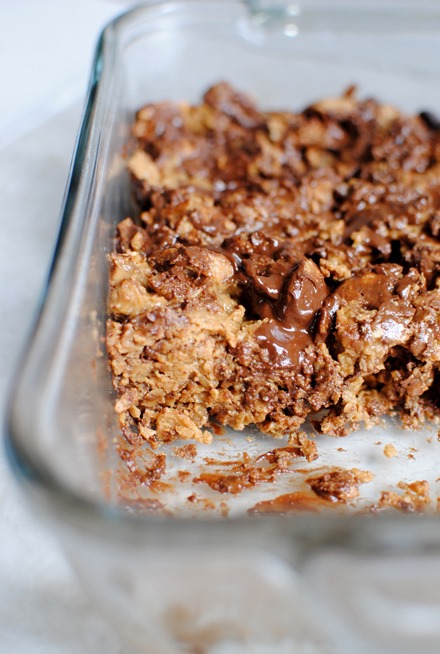 As you may have seen if you follow me on Instagram, I made a batch of chocolate peanut butter cereal bars on Saturday afternoon and they were a little too good. The recipe is an easy one and if you share my intense love for anything made with chocolate and peanut butter, add this one to your “must make” list! 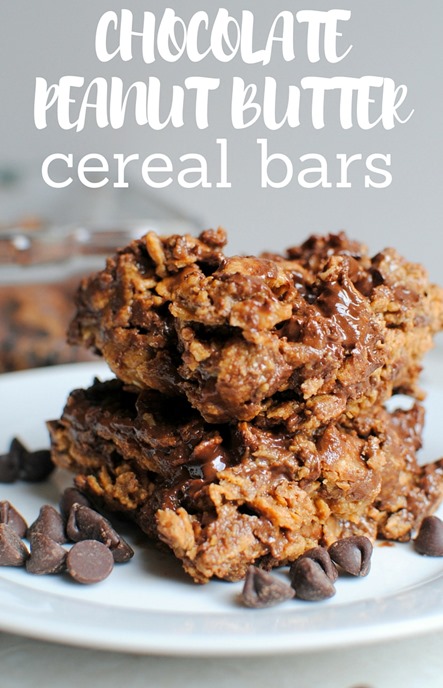 Made with only five ingredients, these chocolate peanut butter cereal bars are easy to whip up when you are craving a sweet treat that tastes like a crunchy peanut butter cup! 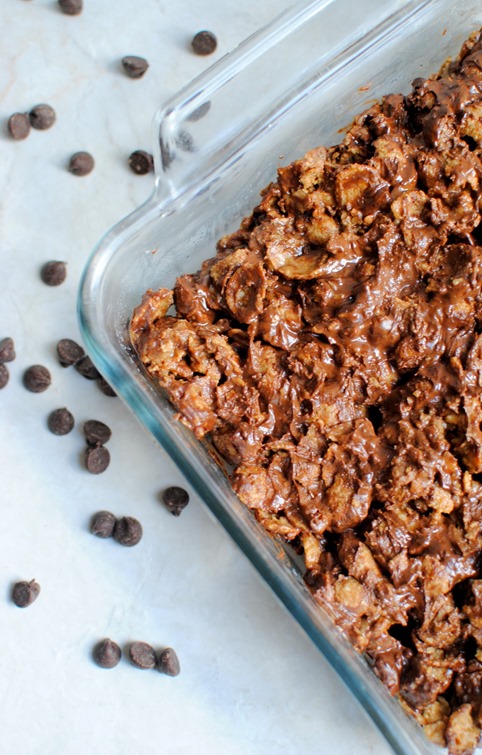 Though I was craving peanut butter and chocolate (because I’m pretty sure I crave that particular flavor combination all day every day), I made the bars in part because I wanted to practice taking pictures of them since I’m making my way through the food photography e-book I recently purchased from Pinch Of Yum. I took a bunch of notes and am actually *shockingly* enjoying food photography a little more these days. Hallelujah!

I fortunately had some help in eating these bars because Ryan’s friend Eric arrived in town to visit soon after Leslie left! Eric has work to do in Charlotte next week but flew in from Chicago a few days early to hang out.(Ryan and Eric met in Ocala when they both worked for the same company and quickly became very good friends.)

The rest of our Saturday passed by in a bit of a blur of trying to entertain a needy baby while trapped inside since the rain picked up again in the early evening. By the time I nursed Chase and put him to bed around 7 p.m., it felt like 11 p.m. and I was exhausted. Ryan and Eric went out for a bit and I was 100 percent content to climb into bed early!

The highlight of our Sunday was, without a doubt, taking our boat out for the first time this year! We’ve been itching to get on the water and finally made it out on the lake for a few hours after Chase’s morning nap. 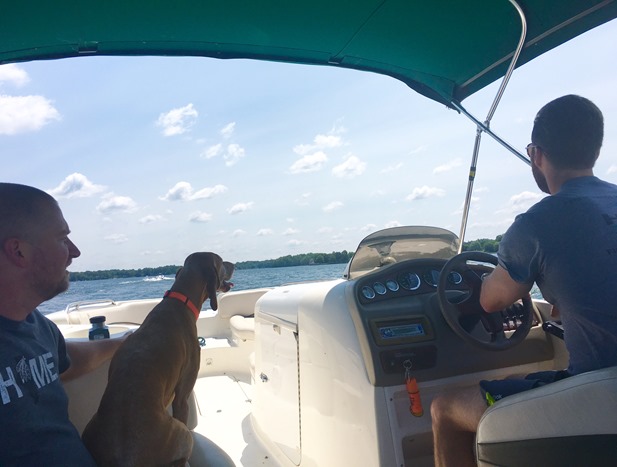 The weather was gorgeous (though still too chilly to swim) and it felt incredible to be back on the water. I see a LOT more weekend boat adventures in our future! 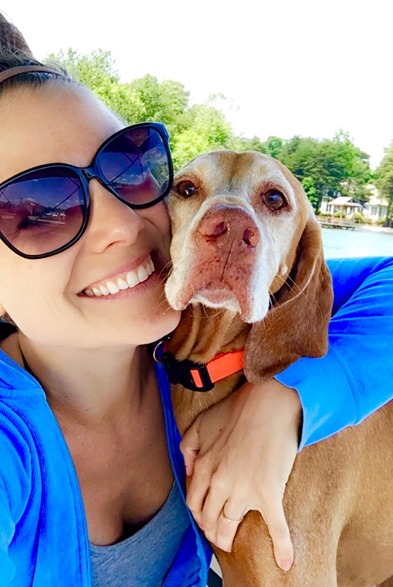 Even though we had not been on the water in months, Sadie didn’t miss a beat and had the best time running all over the boat, watching the ducks and enjoying the lake breeze. She’s definitely water dog, through and through!

The end of our time on the boat coincided with Chase’s need for his afternoon nap which I spent working on this blog post and making a grocery list for the week ahead. And now I’m off to do a little grocery shopping before we grill out tonight and relax a bit before bed time.

I hope you guys had a great weekend!