Navigation
Chase is nine months old! (Well, he technically turned nine months old on April 29 but here we are, 11 days late. Oops.) One of the first thoughts I had as we approached nine months with our baby boy is that Chase has now been out in the world for as long as he was in my belly. It’s a crazy thought and while I felt like everything changed so much from week to week during pregnancy, it seems like every single day with Chase brings about something new. 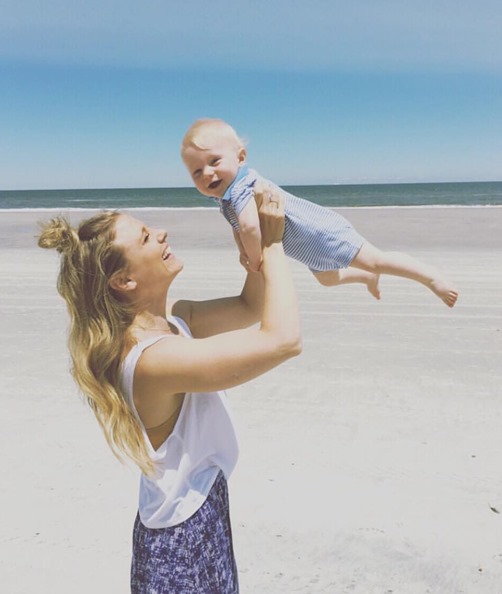 One day Chase can’t roll from his back to his belly and the next day rolling officially becomes his favorite mode of transportation. One day Chase is all gums and no teeth and then the next week he has three teeth peeking through. 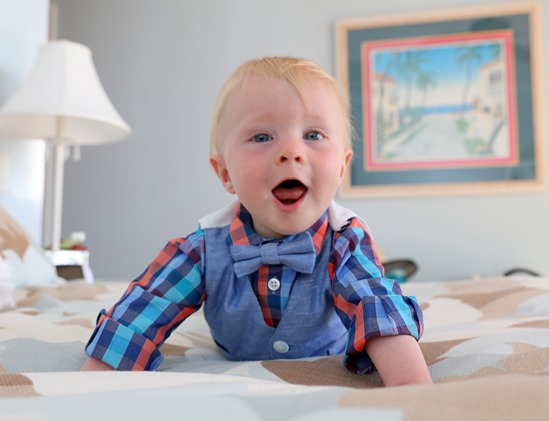 It’s crazy to watch a baby slowly grow into a little person right before your eyes and every time something new happens, I am reminded that my baby boy won’t be a baby forever. I absolutely love watching Chase grow and explore but sometimes I just want time to SLOW DOWN. I make an effort to remain present and enjoy small moments every day but I realize Chase’s first birthday is only a few months away and one day I’ll look back on pictures of Chase at nine months and say, “I can’t believe how little he was,” just like I find myself already doing at his three month baby photos! 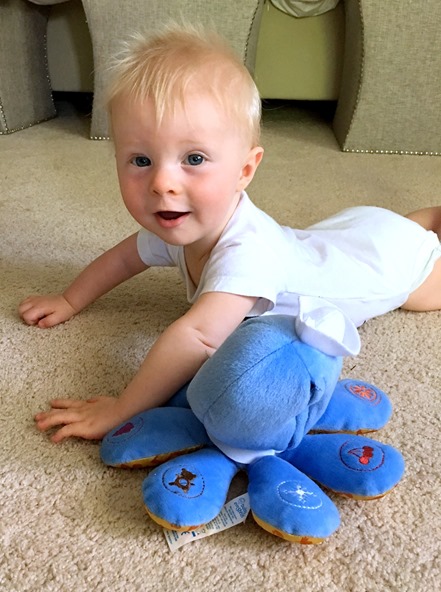 Seeing the world through Chase’s eyes is such a joy. He laughs when I put on my sunglasses or twirl my ponytail around. He giggles when I pretend to eat his fingers. He kicks and squeals and smiles his biggest smile of the day when Ryan arrives home from work. Chase is so full of energy and his exuberance is contagious. 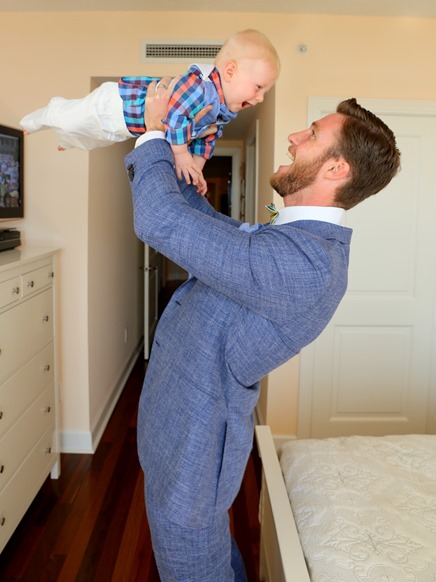 While Chase has always been a curious and observant baby, he is now becoming a rather impatient, too! He doesn’t like to be in one place for too long these days which means we are all over the place every day.

The toys we have in our house buy us 30 minutes or so of playtime until Chase starts to get a little fussy and needs something new. That’s when play dates, Gymboree, swim lessons and walks outside with Sadie are key. Chase thrives on stimulation outside of our house and seems to do best when we are out and about and he has new things to look at, touch and taste. (Always taste. Everything goes in his mouth these days!) 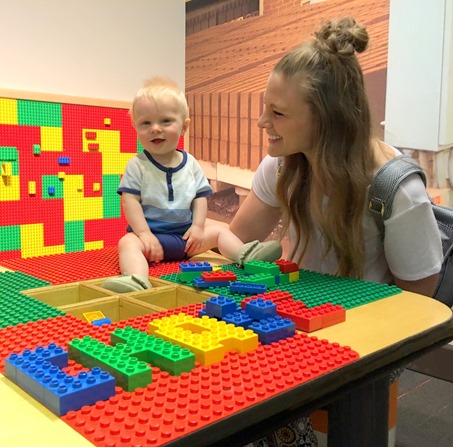 Chase does pretty well with solo play but seems to be entering a phase where he really wants a playmate… And if you start to walk away in the middle of playtime, he will let you know that is unacceptable. Playtime is becoming more and more hands on and interactive!

Oh sleep, you are a beast. We made such wonderful sleep progress with Chase when he was six months old but regressed quite a bit over the past month.

It started when we dropped the Magic Sleepsuit. The transition went okay (we transitioned him into a swaddle that let his arms free and gradually loosened the swaddle around his chest until we dropped it completely) and the struggle with this transition centered around the fact that Chase would roll onto his belly and didn’t know how to purposefully roll back onto his back. (He’s been rolling from his belly to his back since he was only several weeks old, but not intentionally.) Chase would get stuck (basically like a reverse-turtle!) and cry out until we’d flip him. This struggle went on for about a week as he learned to master rolling both ways and I thought we were finally in the clear until Chase’s first earache happened. This completely changed everything and I truly had no idea how much an earache could impact a baby. 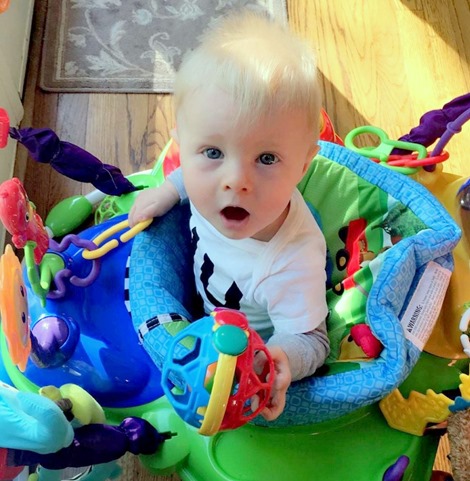 I felt absolutely horrible for Chase and did my best to meet his needs and offer him all the comfort and love he clearly needed when he wasn’t feeling well. Chase is normally such a sturdy little string bean and whenever anyone holds him they comment on how he feels so strong, so holding a baby who felt limp and looked extremely fatigued all the time pulled at my heartstrings. He would wake up absolutely screaming in the night and I nursed him on demand and did my best to give him as much comfort and love as possible. 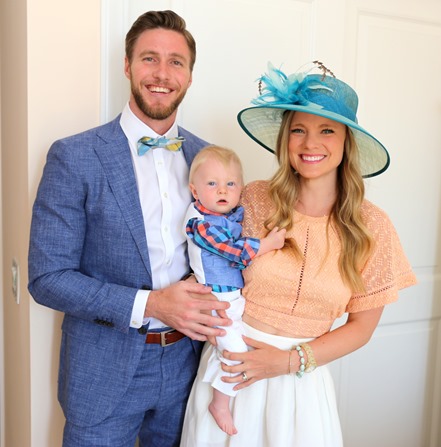 And then, right as he started to feel better, Chase began teething which also impacted his sleep. So here we are at nine months and I’m back to nursing at night again. I am hoping to attempt sleep training again (similar to what we did at six months) this week, so cross your fingers that all goes well and we’ll be back to better sleep in our house soon. If there’s one thing I’ve learned as a new mom it’s that everything changes ALL the time. There’s always a new challenge to conquer, right!?

We are continuing to do a mix of real food and purees over here and feeding Chase is one thing I am hoping to learn to love a little more than I do at the moment. It’s definitely a messy experience that can be frustrating at times when Chase closes his mouth and absolutely refuses to eat but I’m rolling with it and doing a few things to make meal time more enjoyable. Eating together helps and dinnertime is Chase’s best feeding time. I will generally give Chase bits and pieces of whatever we are having for dinner and his favorite foods are always the proteins! He is ALL about chicken, fish, shrimp, steak… basically any protein is always the first thing he reaches for when we give him a few options on his tray.

As for the purees, I am currently trying to give him purees once a day because I feel like he actually consumes food better in puree form than real food form at this point. (He will absolutely eat and swallow real food, but it’s also a lot of gumming around and sucking on food at this point, too.) Sometimes Chase does well with the purees and other times eating is the last thing he wants to do. Food is not his priority and he’d almost always rather be playing which is why I’m trying to do things to make food feel like playtime and a little more fun (like the floor mat idea)! His favorite purees continue to be any combinations that include sweet potatoes, butternut squash and pears. 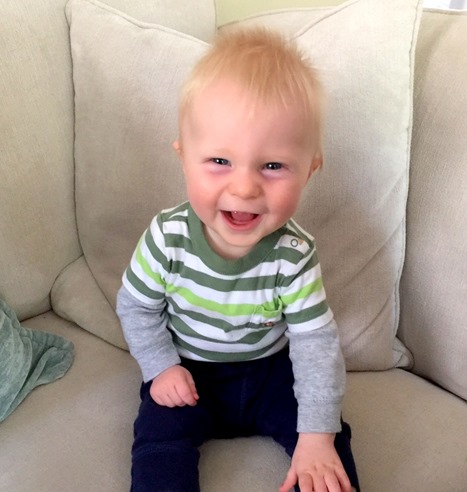 Breastfeeding is still Chase’s primary source of food (I think I repeat the “under one just for fun” mantra regarding food every day to make myself feel better when Chase’s eating isn’t exactly on point) and it is going well! When Chase isn’t distracted during a feeding (<— always a battle!), I find myself truly enjoying nursing. Nursing Chase feels like a reminder for me to slow down. It’s during our nursing sessions when I feel like my heart doubles in size as I look at Chase, stroke his hair or cheeks and dodge his grabby little hands as they reach for my face. When he’s done feeding during the day, he’ll often come off my breast and babble up a storm. He’s always so chatty and smiley after a feeding and it’s just the best!

One nursing-related issue that surfaced this month was Chase’s clear preference for my breast over a bottle. I dislike pumping and since I feel fortunate to be home with Chase every day with the ability to nurse him, I’ve let pumping fall to the wayside. I think this may not have been the smartest thing to do because now Chase definitely prefers eating from my breast to a bottle. He will eat from a bottle, but not particularly well and that can feel a little stressful to me at times (even though I do feel like it is my fault). I think I need to get back to pumping and bottle feeding a little more regularly since I want to feel like we can have a babysitter feed Chase from a bottle in the future without me feeling stressed that it won’t go well. Something to work on! 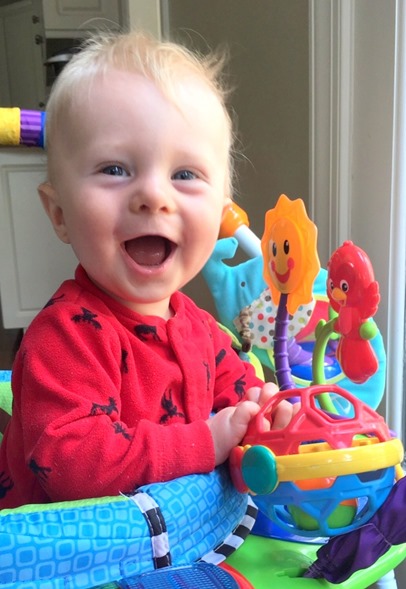 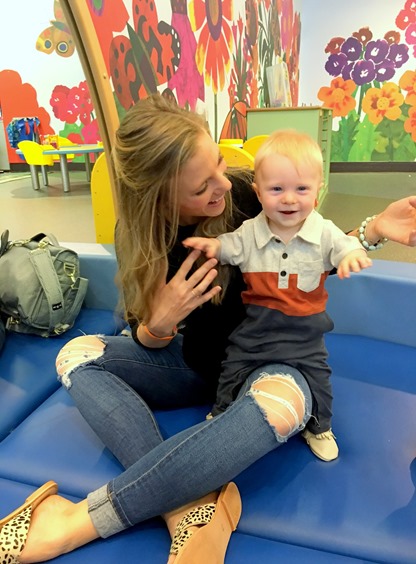 We’ve had some new discoveries this month that Chase seems to love and I’ve added them to this list that also includes some of our tried and true favorites that continue to be go-to items for Chase at nine months old. 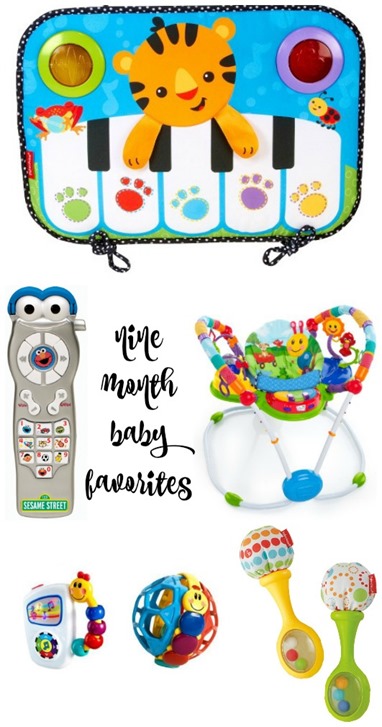