I think that blog post title sums up our weekend pretty well, but just in case you were hoping for a wee bit o’ detail, I’ll try my best to oblige! Let’s back things up and start from Friday night…

On Friday night, I made reservations for an impromptu early evening date night for me and Ryan at Kindred, our favorite restaurant located in the nearby college town of Davidson. 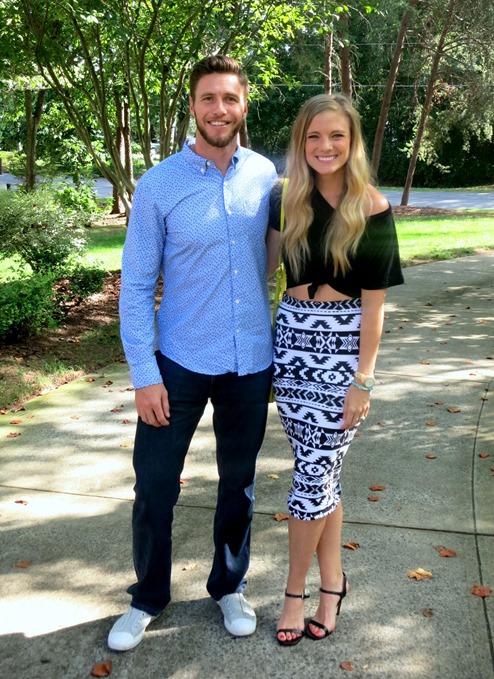 Top: Abound via Nordstrom Rack // Midi Skirt: Express (I bought it last year but this Express skirt is very similar) // Shoes: Charles David via RueLaLa // Purse: Marc Jacobs via thredUP (I am so in love with this purse!)

With no international data plan and limited access to wifi during my travels to Canada last week, I felt rather disconnected from Ryan and a quality date night without interruptions (and wine!) was just what we needed. 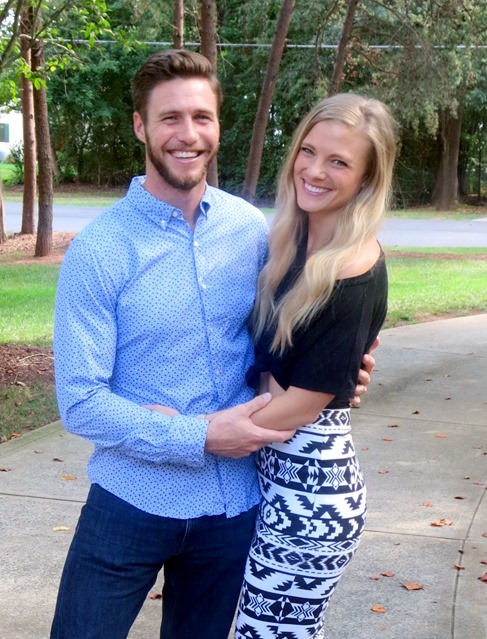 Thankfully my mom was still in town (she left early yesterday) and offered to watch Chase which allowed us to relax and dine distraction-free. We had so much fun and began our meal with drinks and Kindred’s milk bread, also known as the best bread in the entire universe. (<— Not an exaggeration.) 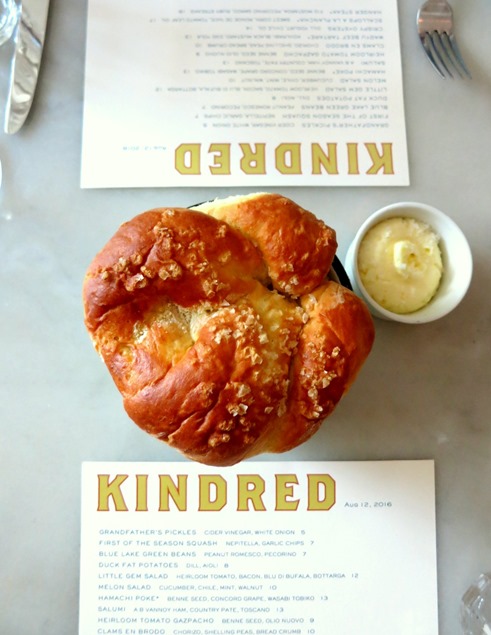 Ryan and I tend to want to try a billion different dishes on Kindred’s ever-changing menu, so we decided to order a bunch of small plates to share. This worked perfectly and we chatted away as ate our way through plates of clams, buttery summer squash, skirt steak, scallops and poke. 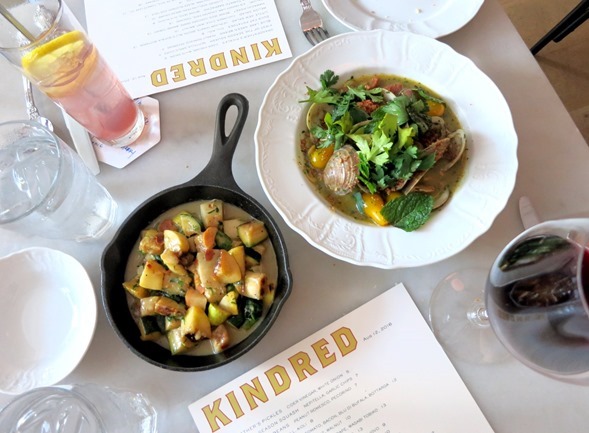 Everything was fantastic but the standout dishes for me were the scallops and poke. Always the seafood. Always. 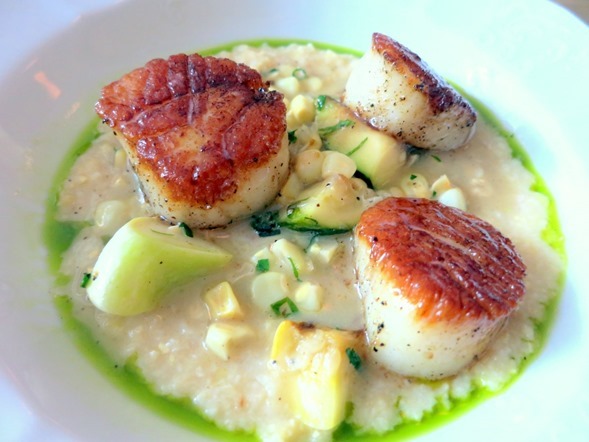 We were full but not stuffed by the time our check was delivered to our table and after ordering a milk bread cinnamon roll to go for a late-night treat, we popped into Whit’s, our favorite frozen custard shop for his and hers custards. 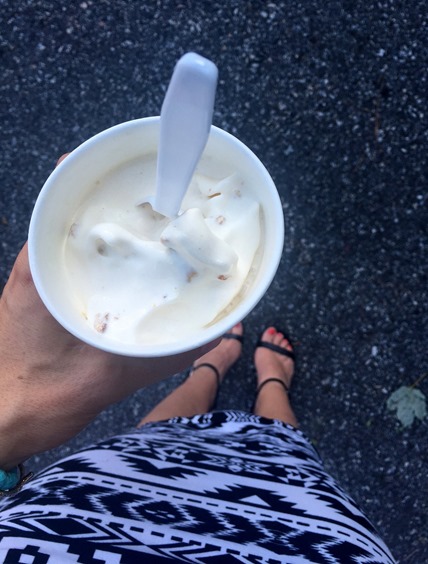 My custard combination included graham crackers and caramel and it totally hit the spot on a hot summer night. Sweet tooth = Satisfied!

By the time we arrived home, Chase was ready for bed, so we said hi to my mom and our favorite little guy before I put him down for the night.

Saturday morning began with a much-needed workout! I missed the gym a lot last week and it felt good to sweat it out and get my heart pumping again. Once I made it back home, I spent the morning eating baked steel cut oatmeal for breakfast, unpacking from our trip to Canada and hanging out around the house with my mom, Chase, Ryan and Sadie.

The weather was gorgeous on Saturday but still quite hot, so a day on the boat sounded more than appealing. My mom encouraged us to take advantage of her last day in North Carolina and spend a few baby-free hours on the boat with Sadie while she soaked up some last-minute quality one-on-one time with her grandson. 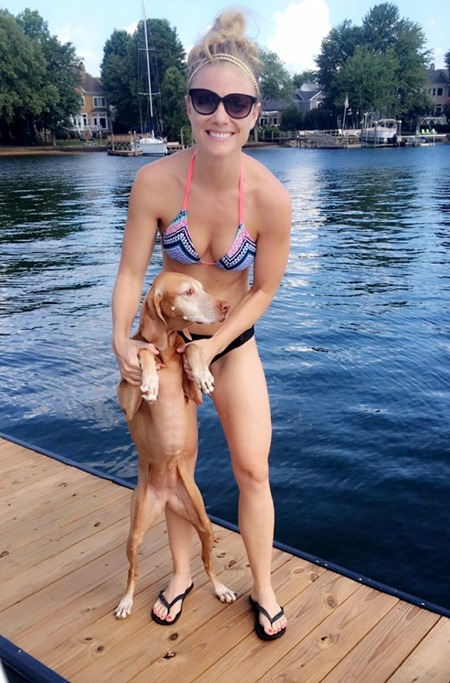 Since our boat time is typically limited to 90 minutes or less when we have Chase on board, we were happy to take my mom up on her offer and spent the next three hours on the water. 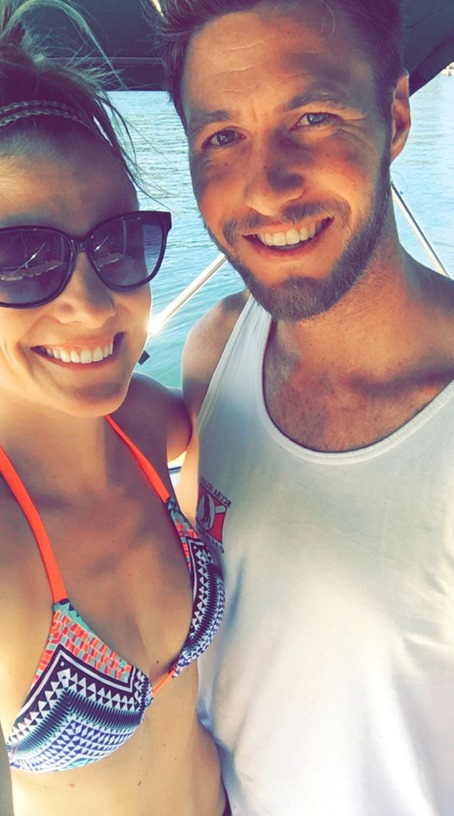 (Pic from my Snapchat –> juliepbfingers)

I had the best time swimming in the lake, splashing around with Ryan and Sadie and reading magazines on the boat. Lake days = Summertime at its finest! 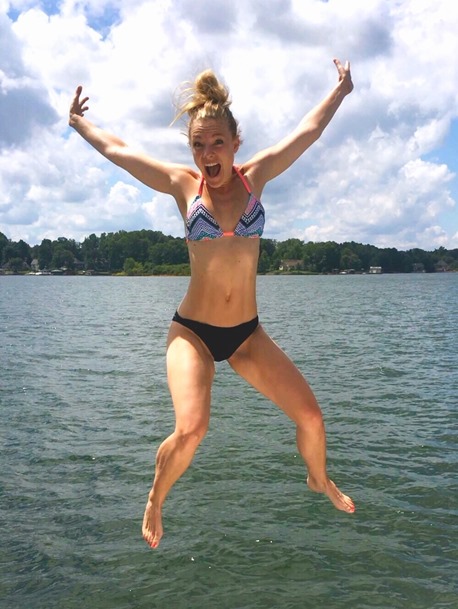 By the time we made it back, Chase was just waking up from a nap, so our timing was perfect for baby playtime! 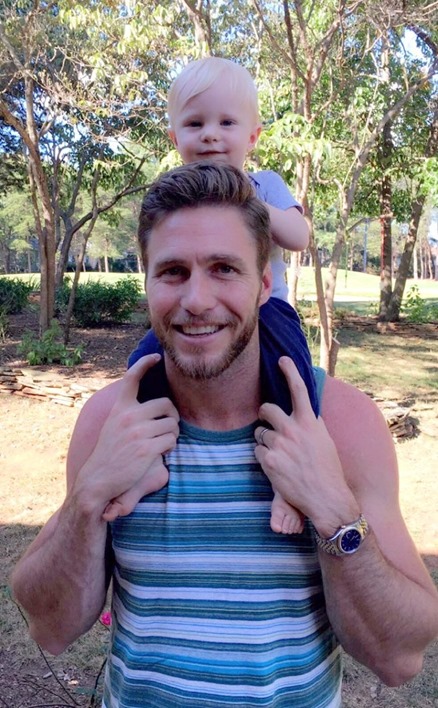 Lots of book reading and toy train noises ensued before our stomachs eventually told us to take a break because dinner time was approaching. We headed out to pick up some food for an evening cookout and grabbed a hodgepodge of kebabs and burgers from The Fresh Market to throw on the grill. 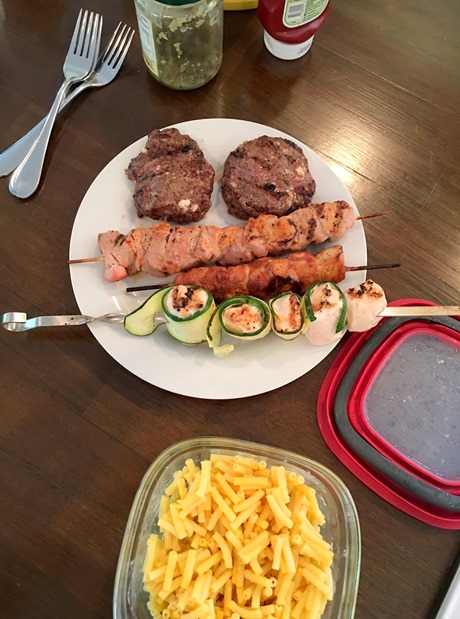 We clearly weren’t thinking clearly because we completely forgot side dishes, so reheated leftover macaroni and cheese filled that void, along with a couple of pints of ice cream because ice cream on the weekend is a necessity in our house. 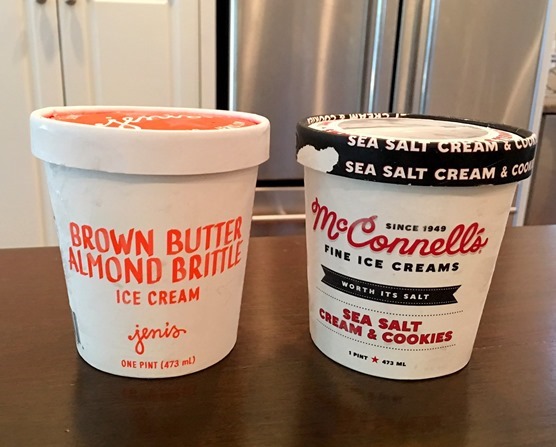 I selected Jeni’s brown butter almond brittle ice cream and it was out of this world! A cold and creamy slam dunk of a flavor! Ryan was awfully jealous because his pint of McConnell’s sea salt cream and cookies ice cream was freezer burnt. Womp, womp. Even though it took some convincing, I shared because I am a nice wife.

My mom wasn’t in the mood for ice cream but since we ate early, by the time 8 p.m. rolled around, I was feeling snacky and coerced her into eating some homemade Chex Mix with me. 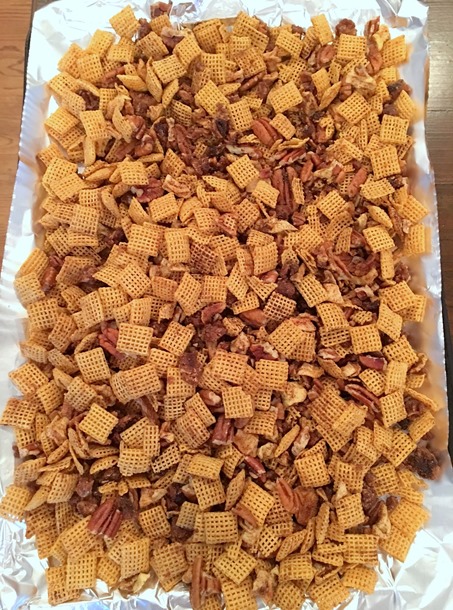 That stuff is WAY too addicting. We ate our way through almost half a batch of Chex Mix while watching the Olympics. Maybe I’d have a chance at competing in the Olympics if Chex Mix Eating became a sport?

Ryan and I said our goodbyes (and about a billion “thank yous”) to my mom before bed on Saturday night because she had plans to wake up early on Sunday to get a jump start on her drive back home to Florida. It was sad not to have her joining us for breakfast on Sunday morning but I’m so thankful for the time we had together. 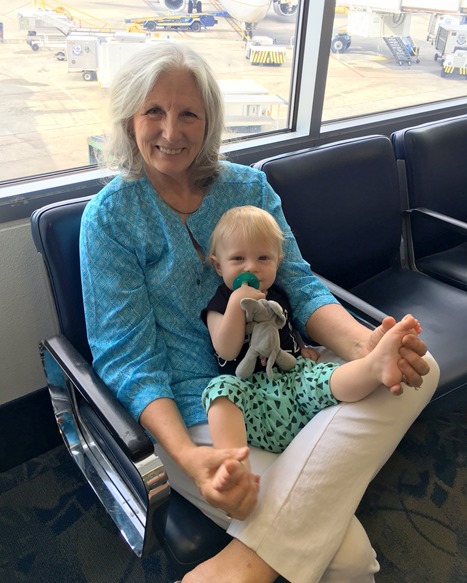 Moms and grandmas are some seriously special people and I’m so grateful for the two weeks I had with my mom over Chase’s birthday and my blog trip to Winnipeg. She’s the best and watching Chase light up around his grandma and fall asleep in her arms on the plane (something I previously would’ve thought would be an impossible feat for our active little guy) is something I will cherish forever.

I began my Sunday morning with waffles, eggs, some work on the computer and meal planning while Ryan hopped on his rowing machine in our mini home gym. Eventually Chase woke up and play time began!

Ryan and I piled our little family into his car and headed out to a local greenway for a hot and sweaty walk. 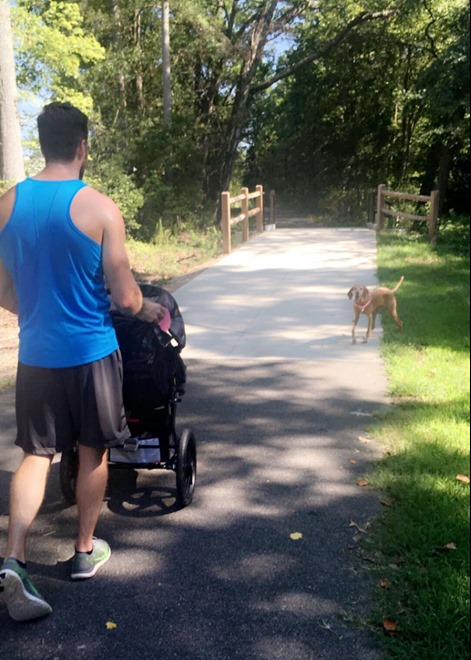 The greenway used to be our favorite walking trail when we lived in temp housing when we first moved to North Carolina, so it was fun to return to one of our favorite walking spots! We walked for right around an hour, stopping for a few water and snack breaks for Chase, and made it home right as Chase began to get fussy. He clearly needed a nap (I’m still trying to figure out whether he’s ready to drop down to one nap a day – some days I think YES, DEFINITELY and other days it’s like no, no, no…) and while Chase slept, I began working on this blog post.

His nap lasted right around two hours and once he was up, we were off again, this time heading to Birkdale Village for acai smoothie bowls from Clean Juice and some splash pad fun. 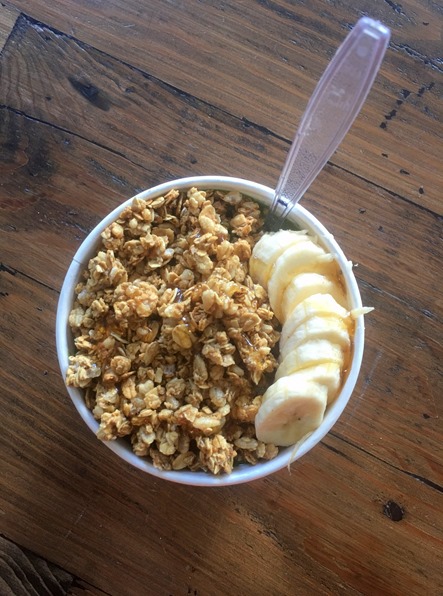 As you may remember, previously the splash pad wasn’t exactly a hit with Chase and though he was still skeptical and definitely wanted to be held the whole time, he was noticeably braver around the shooting water during our second visit. Baby steps! 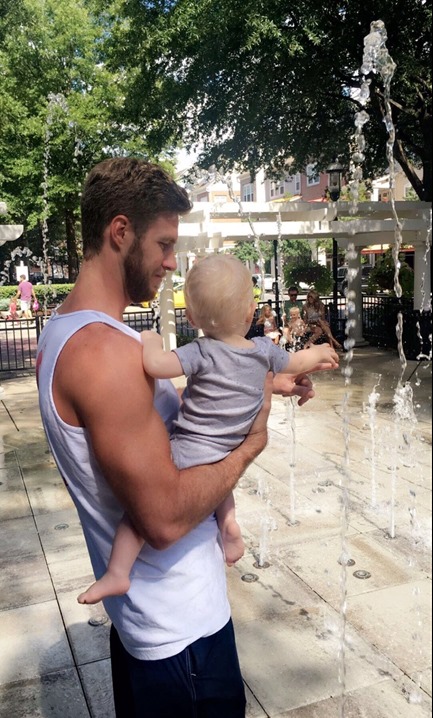 On our way home from the splash pad, we popped into the grocery store for food for the week before driving home for dinner followed by bath time for Chase. Once Chase was settled in his crib, Ryan, Sadie and I curled up on the couch to watch the Olympics and Big Brother (aka Bamboozled – we love this hot mess of a show way too much right now) before calling it a night.

I hope you all had a lovely weekend and that your Monday is off to a good start! See ya tomorrow!