Good morning! How are you guys doing? I am feeling rejuvenated after a weekend with family and friends and a few hours of baby-free boating. Aside from the day I spent away from Chase in New York back in May, I haven’t been away from our little guy for more than a couple of hours at a time, so four hours of boating on the lake while Chase hung out at home with my mom left me feeling more rejuvenated than I thought possible. But I’m getting a little ahead of myself… Let’s back it up a bit and begin with Saturday!

Saturday began with a Burn Boot Camp workout that included a bursts of cardio and some kettlebell strength exercises. It was tough but not a total killer and I arrived back home feeling energized. By the time I arrived home, Chase was getting a little fussy, so I nursed him and put him down for his morning nap. My mom offered to stay at home on baby monitor duty so Ryan and I could take Sadie on a walk before the heat of the day set in, so the three of us headed out on a three mile walk around the neighborhood.

Ryan and I had to laugh because Sadie found a stick almost immediately and started jumping all over the place as we walked down our driveway. I think she noticed the lack of a stroller on the walk and couldn’t repress her joy and enthusiasm.

By the time we made it home, Chase was just beginning to stir, so I grabbed a quick shower and got ready for the day. We spent the rest of the morning playing, snacking and entertaining Chase before it was time for us to drive over to my friend Megan’s house for her son’s first birthday party! 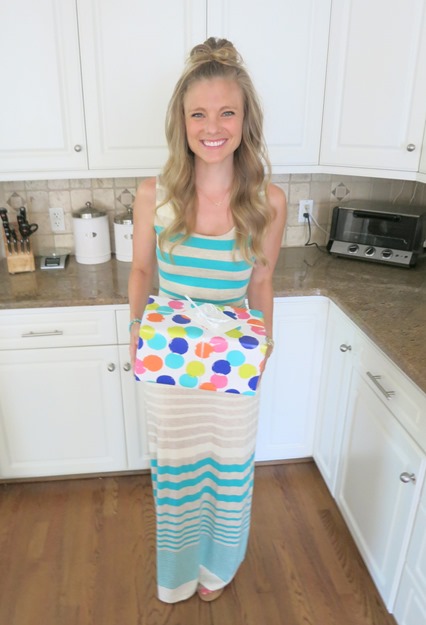 (FYI for those who order regular Stitch Fix deliveries, my maxi dress came in a recent delivery and I love it! The back has a crisscross open design that I adore.) 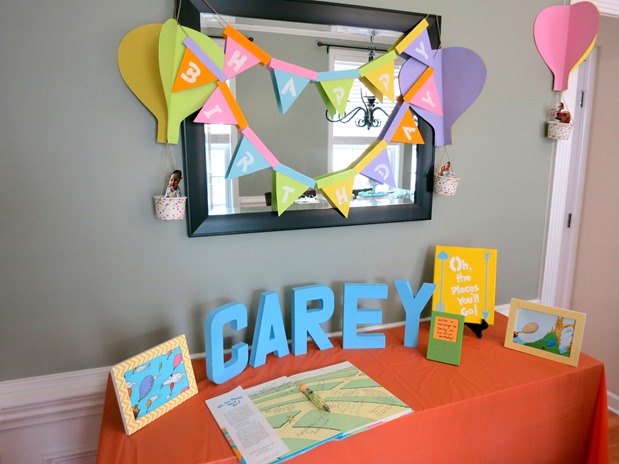 Chase’s friend Carey turned one last week and we had so much fun celebrating his special day with some of Chase’s baby BFFs. 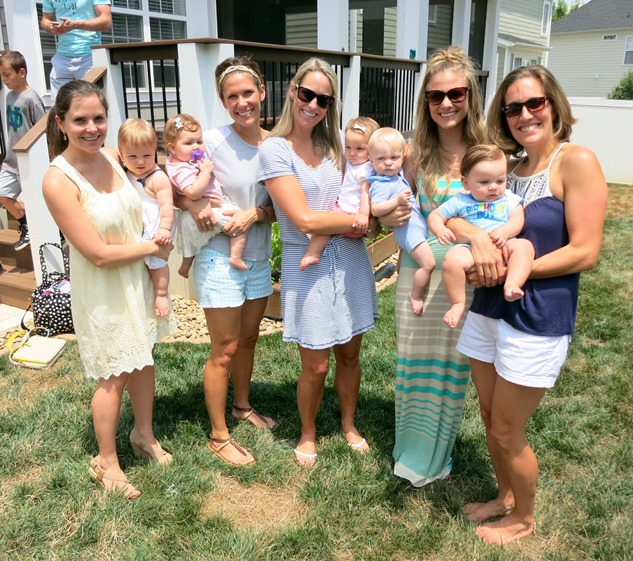 We first met Megan and Carey at Gymboree when Carey and Chase were the only two boy babies in a sea of girls. Carey is such a sweet little boy and Megan had him looking extra special for his party with his hair parted with gel.

The party was a lot of fun Megan did such a great job decorating her house to fit the party’s Dr. Seuss theme. 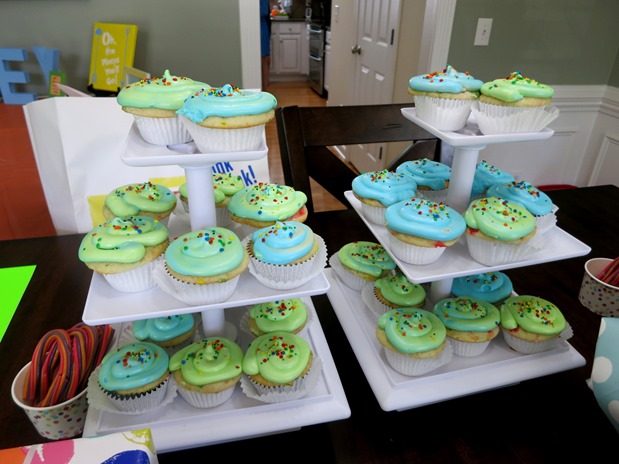 All the little ones crawled around and played in the backyard and living room until afternoon naptime rolled around and we all had to say goodbye to the birthday boy around the same time. 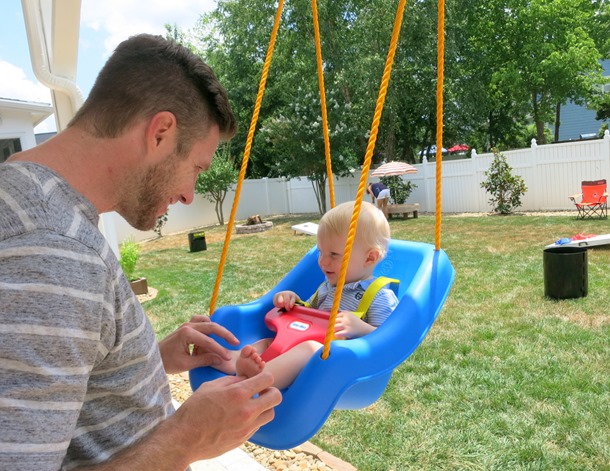 Chase fell asleep in the car on the way home but thankfully transferred to his crib for a long afternoon nap after a brief nursing session. Ryan and I hung out with my mom and I made a batch of baby banana oatmeal muffins for Chase while he rested. (I’m planning to share the recipe on the blog soon because they were ridiculously simple and Chase loved them!) Eventually Chase woke up and we all headed out for some oh so exciting Saturday night errands to Lowe’s and the grocery store. Woop woop!

Chase ended up sleeping past 7:30 a.m. on Sunday (after waking up to nurse at 4 a.m.) so we got to ease into the morning a bit which was really nice! Ryan headed off to the gym while my mom and I hung out and ate breakfast. Eventually Chase woke up, so we played for a while before my friend (and former blogger!) Caitlin came over with her two adorable kids to spend a few hours with us on the boat! 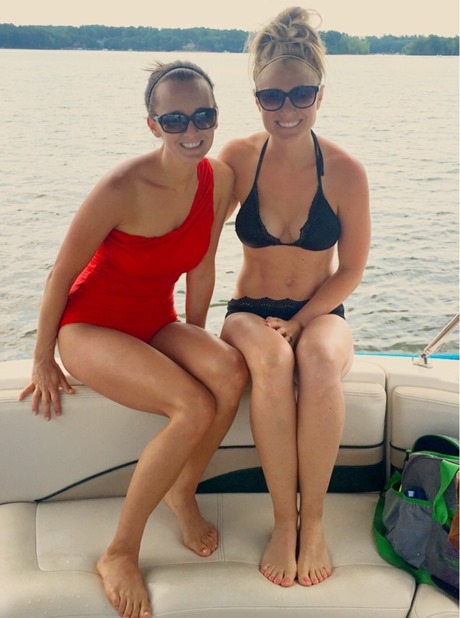 For all the former Healthy Tipping Point readers out there, Caitlin says hi!! She’s doing so well and we had a blast catching up and spending time together in the summer sun.

Initially my mom and Chase were going to join us on the boat, but my mom said she wouldn’t mind some time alone with her grandson and kindly offered to watch Chase and give us some baby-free time which was so nice. 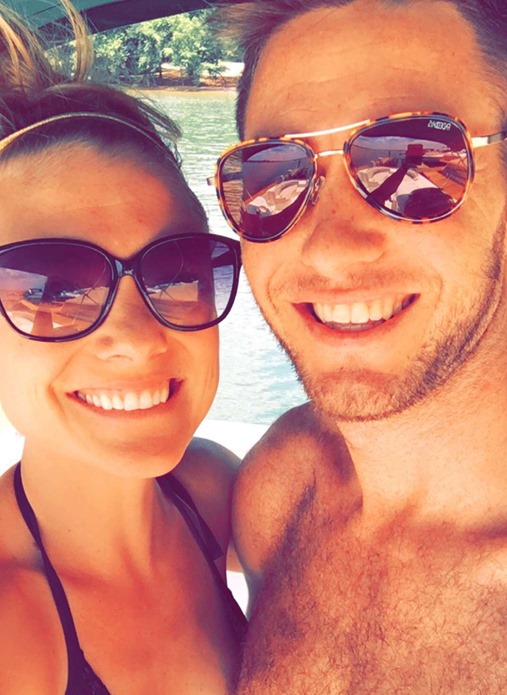 Last summer, Ryan and I would often pack a cooler, take the boat out at 11 a.m. and not return home until after 6 p.m., but now that we have Chase in the mix, our boating time is typically limited to 90 minutes or two hours at the very most so it felt special to be about to be out on the water for almost four hours on Sunday.

We made it back home right before Chase was ready for his late afternoon nap, so the timing of everything worked out pretty well! While Chase was sleeping, I worked on the blog a bit before dinner and more baby playtime. This weekend passed by in a flash and sort of felt like the official kickoff to summer to me. I’m hoping for a lot more weekends filled with family, friends and fun in the sun in the coming weeks!