Navigation
Aside from a post about sleep training (which is coming soon!), a post detailing Chase and Sadie’s ever-changing relationship probably the most-requested baby-related post from you guys! Since we all know I am rather wordy when it comes to writing about both Sadie and Chase, this post is sure to be a long one, so buckle up! 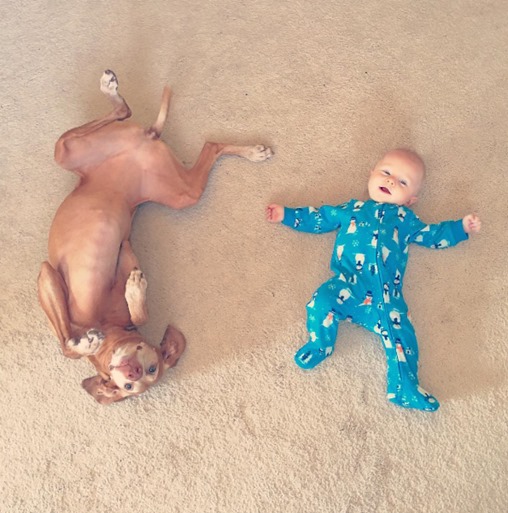 Now for the long version…

First, let’s talk about how Chase is responding to Sadie. In the beginning, Chase was rather indifferent when it came to the presence of our crazy dog. This was to be expected because I didn’t think a newborn would have a reaction to a dog (or pretty much anything, really), but I was surprised at how much Sadie’s barking did not bother him. In Chase’s newborn days, he could nap in his Rock ‘n’ Play and Sadie could bark at the UPS delivery man five feet away and he wouldn’t even stir. High fives all around for that one, right!?

As Chase grew and became more alert to the world around him, he discovered his furry sister and quickly became infatuated. Sadie is honestly the only thing in our house that seems to be able to truly captivate Chase and hold his attention for a long period of time. 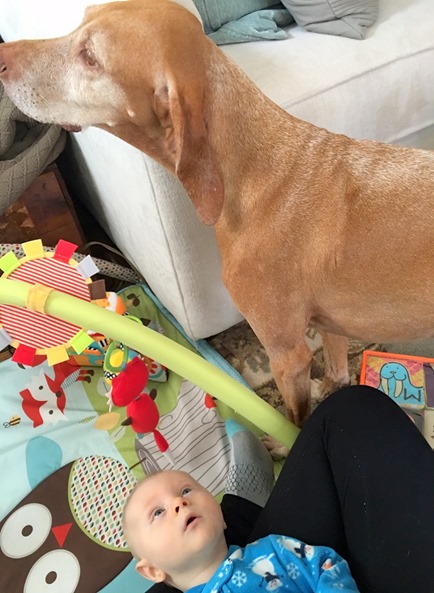 He loves watching her, squealing at her,  reaching out to touch her and jumping up and down in his activity jumper as I play indoor fetch with Sadie beside him. She is, without a doubt, the coolest thing in the world to Chase right now.

Chase looks at her with wide-eyed concentration. We laugh because it really looks like Chase is deep in thought whenever he is watching Sadie. He is totally enamored with her and it’s fun to see his curiosity surrounding Sadie continue to grow. 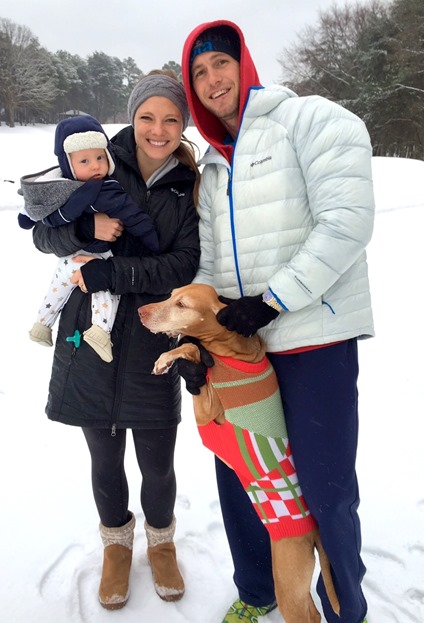 Oh Sadie, you are such a character. Whenever people would ask me or Ryan how we thought Sadie was going to handle a baby in the house, we talked about it with reservations.

Sadie is SO needy and is very, very used to being the baby of the house. We are the biggest suckers when it comes to Sadie and have always let her lounge on the couch, sleep in our bed, curl up all over our bodies (I’m sure my fellow vizsla owners out there know that last one isn’t really an option and more of a requirement for owning a “velcro dog”), so we had a feeling she might not love a new addition taking away some of her attention.

And we were right. 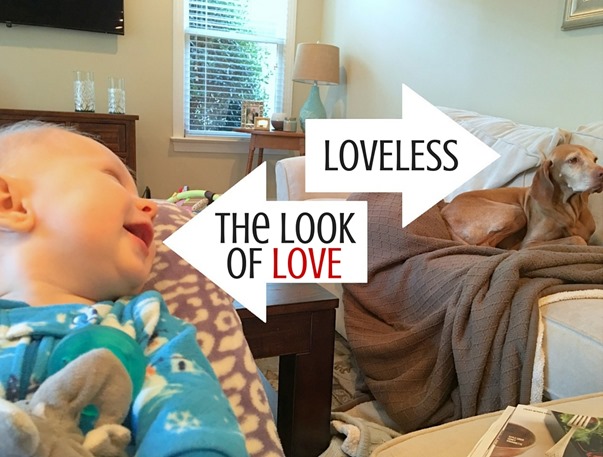 At first, Sadie ignored Chase. She’d sniff him on occasion and whine when he would cry sometimes, but for the most part she just pretended he wasn’t there and would proceed to try to climb in our laps even when we were holding Chase. She didn’t understand that holding a baby meant holding her at the same time wasn’t really an option. 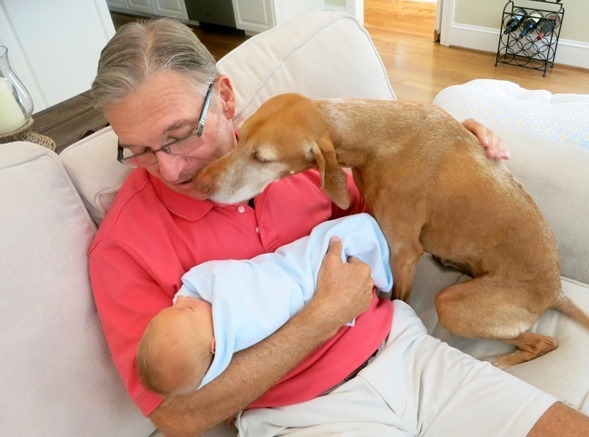 There were a few things that I think made the addition of Chase into our lives a particularly tough pill for Sadie to swallow that I didn’t really think about ahead of time.

First, we talk to Chase in high-pitched sing-song voices a lot because they make him smile more than anything else. Well, guess who else we talk to in high-pitched voices? Yep, Sadie. Now “her voice” is being used to communicate with another being in our house which I am sure is incredibly confusing. 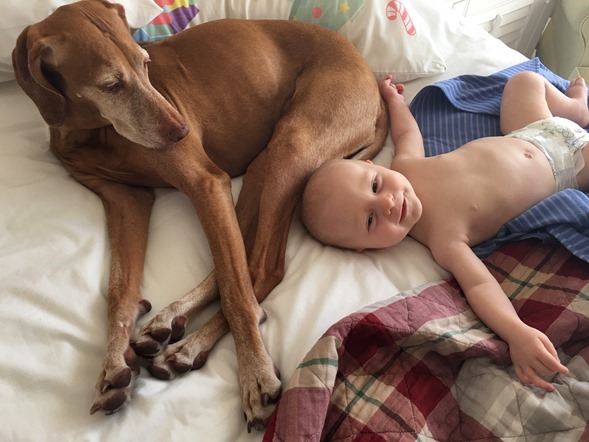 Second, a lot of our playtime with Chase takes place on the floor. Sitting on the floor in Sadie’s world always meant “go time” before and lots of playtime for her. 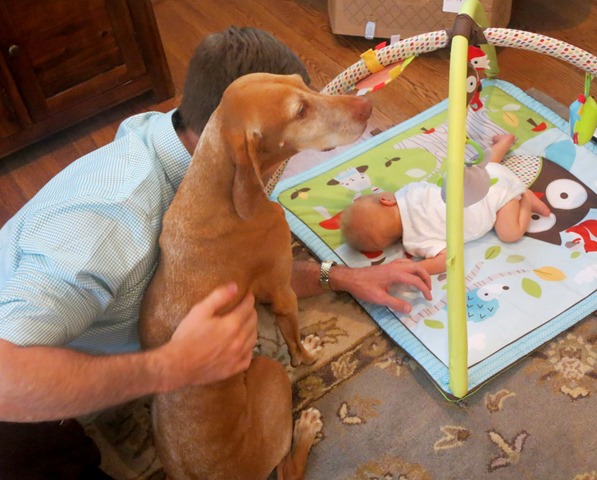 And third, we love making noises for Chase. Whether it be whistles, blowing on his belly or other silly mouth noises, Chase loves engaging noises… But so does Sadie. They drive her absolutely crazy to the point that I honestly try not to make these types of noises unless I’m in a room away from Sadie or I have Chase high up on his changing table where Sadie cannot jump all over the place around us.

The good news is that Sadie is such a sweetheart and has never shown even the slightest signs of aggression toward Chase (we weren’t concerned about this, but it’s still worth mentioning). She has definitely shown signs of jealousy, but Sadie has always been a jealous creature and loves being the center of attention at all times. Clearly this isn’t always in the cards for her these days, especially when I’m home alone with Sadie and Chase during the day, but we are doing our best to make her feel very loved through walks, evening cuddles after Chase is in bed, lots of praise when she behaves well (especially around Chase) and more rounds of indoor fetch during the day than I’ve ever played in my life.

So, in far too many words, you have your Sadie and Chase update. 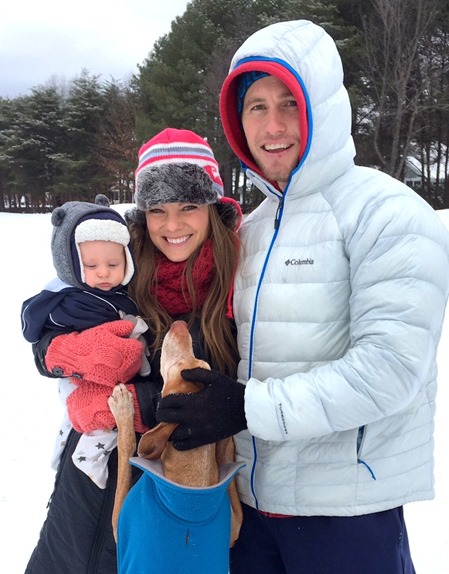 I wish I could say they’re on their way to becoming fast BFFs, but right now their love is a little one-sided. I’ve been told Sadie may come around when Chase starts dropping food on the ground for her, so there is still hope, right!?