Hello from sunny Florida!! It feels so nice to be back in the sunshine state, inhaling the salty air from the warm sea breeze. Part of me feels like I will always identify with being a “Florida girl” and even though I absolutely love living in North Carolina (<— and even that feels like an understatement!), there’s something about hearing the crash of waves and feeling the sand between my toes that relaxes me in a way I miss when I’m away from the ocean for too long. I’m so happy Chase and I were able to coordinate a week-long visit to Jacksonville to spend some quality time with my family! 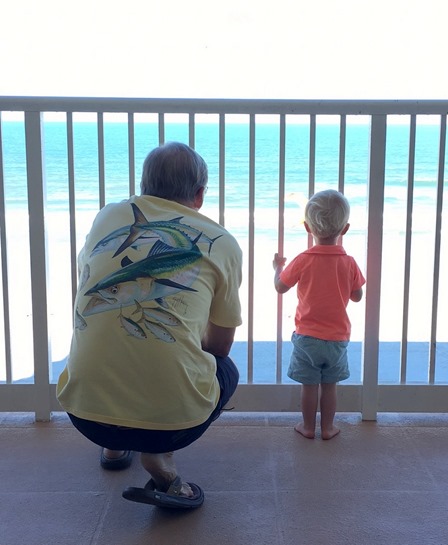 Ryan dropped us off at the airport late Friday morning and after we said our goodbyes and wished him well on his hiking trip with Sadie, we were off to Florida! 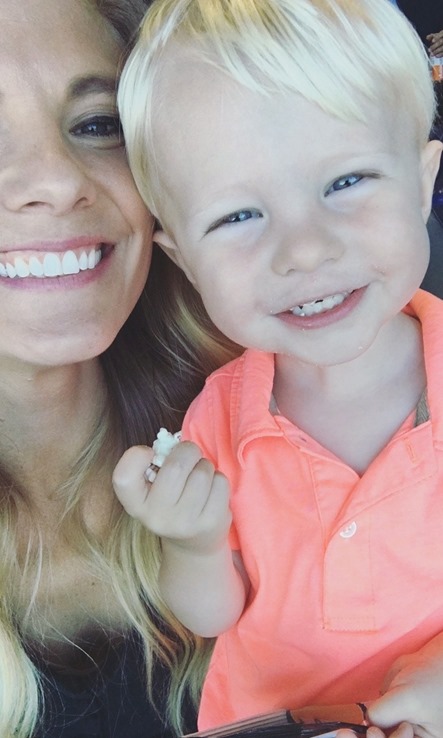 Chase and I arrived a little after 1 p.m. and he was absolutely amped when he saw my mom and sister waiting for us at baggage claim! His face broke out into the biggest smile as he squealed “Mamie!” (his version of Grammie) and “Roth!” (his version of Ross – he apparently thinks Leslie and her husband are one human). He was beyond thrilled to see Pop (my dad) and Ross when he saw the guys back at my parents’ place and was on cloud nine for the rest of the day with so many playmates around!

Our first full day in Florida was a fun one! Chase was up for the day at 7 a.m. and joined  us for breakfast before my mom offered to take him on a Grammie-Chase adventure while my dad went on a ride (he’s big into biking these days!) and I joined my sister and brother-in-law at their gym for a workout. We made our way to Jax Sports Fitness for a workout that left all of us completely drenched in sweat. 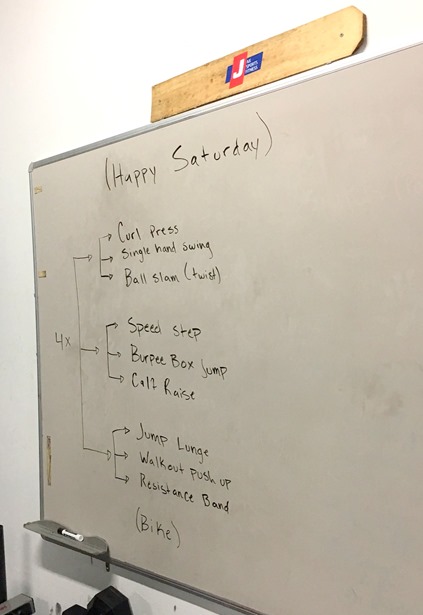 We left ready for some food and popped into Fla. Juice & Bowl for their opening day! You guys know I love a good smoothie and Fla. Juice & Bowl delivered! Ross, Leslie and I shared a sample of their smoothies and tried their on-tap kombucha (the ginger was amaaaazing) and left saying we’d all happily return in the future. 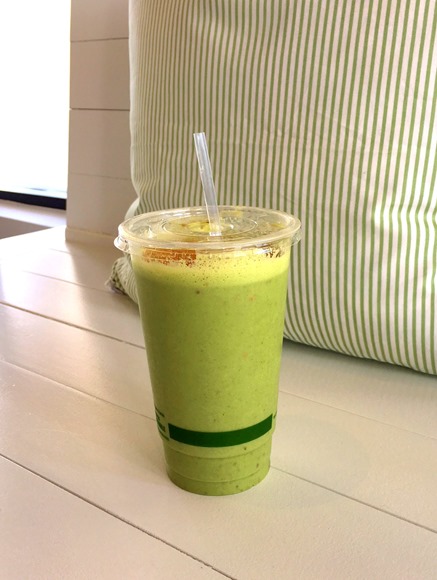 FYI, for the locals, the V-Land smoothie was my favorite and included a delicious blend of almond milk, raw coconut water, kale, dates, banana, walnuts. As we sipped our smoothies, Leslie, Ross and I drove back to my parents’ place where I quickly changed into my bathing suit and scooped Chase up for some pool and beach playtime. 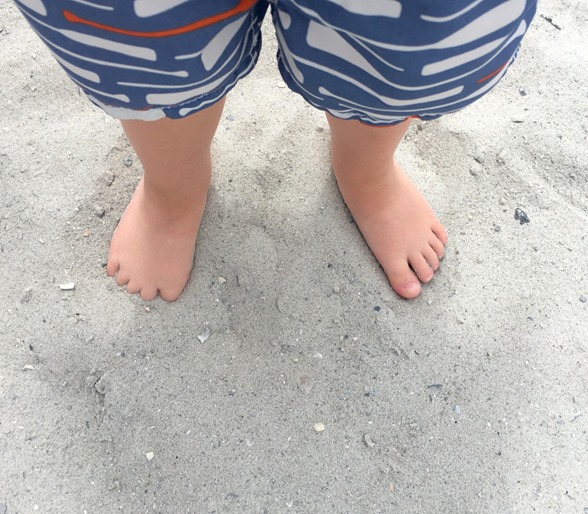 My parents, sister and brother-in-law joined us shortly after and we had a blast in the sun before it was time for Chase to go down for a nap.

While he slept, my mom and dad offered to stay with the monitor and since I knew my mom was anxious to get back to reading The Kind Worth Killing (I told you guys it’s a must-read!) I decided to head out and join Leslie and Ross at Bold Bean, a beautiful local coffee shop. We ordered drinks and set up our computers because all three of us had work to do over the weekend and it was 1,000 times more fun working alongside two of my favorite people than by myself like I usually do every day! We got a solid two hours of work in (I had a deadline for a brand partnership due) before heading out to meet back up with my parents and Chase.

We spent the time before dinner at a local park where Chase could run around and burn off some energy and my brother-in-law could practice skateboarding. 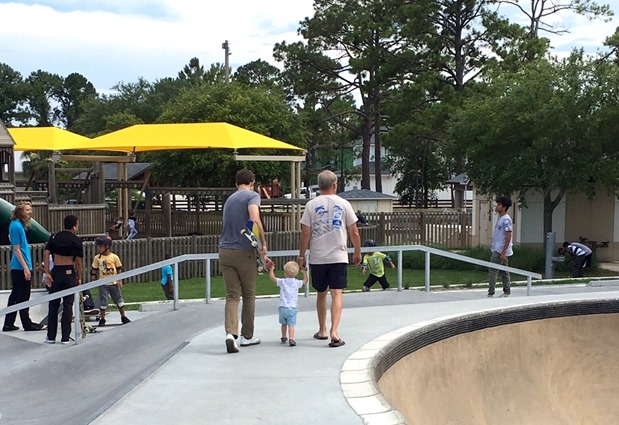 Ross used to be really into skateboarding when he was younger and my sister gave him a longboard a while back that he had been itching to try out the new local skate park. Watching everyone do tricks and flip their skateboards all over the place was really cool and especially entertaining to Chase who watched with wide-eyed wonder!

The skate park is located right next to the Jacksonville Beach fire station and since they had a fire truck parked outside, we couldn’t resist walking Chase over to see the big red truck. He was in absolute awe and an incredibly nice fireman greeted us and even offered to let Chase sit in the truck which absolutely made his day! 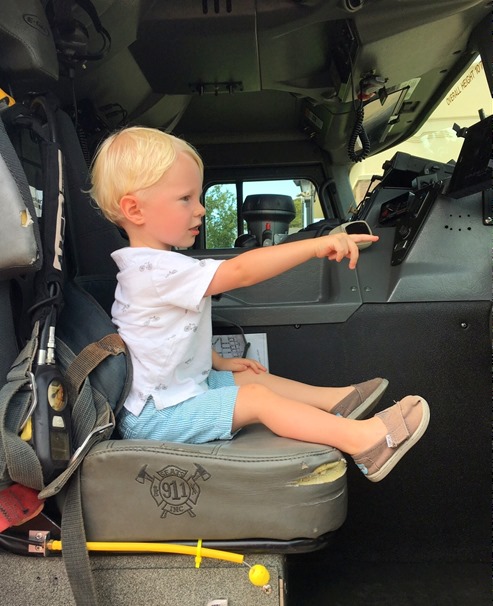 He beamed the whole time and said “Fire truck! Wee-ooo-wee-ooo!” over and over. Talk about toddler heaven!

We thanked the fireman for his kindness and the brave work he does day in and day out and eventually made our way back to my parents’ place around 5 p.m. We spent the rest of the evening catching up with some of my parents’ friends who came over for cocktails on the porch before digging into a big spaghetti dinner!

Sunday morning began with breakfast and church! We attended a 10 a.m. service so we didn’t make it back home until lunchtime. Chase was ready for a nap not long after we were done eating our ham sandwiches and once he went down, my sister was kind enough to help me take some pics for the blog!

We snapped photos for four different workouts (a variety of strength workouts as well as a core workout and a bodyweight workout) before joining my family for some downtime before Chase was up and ready for action. 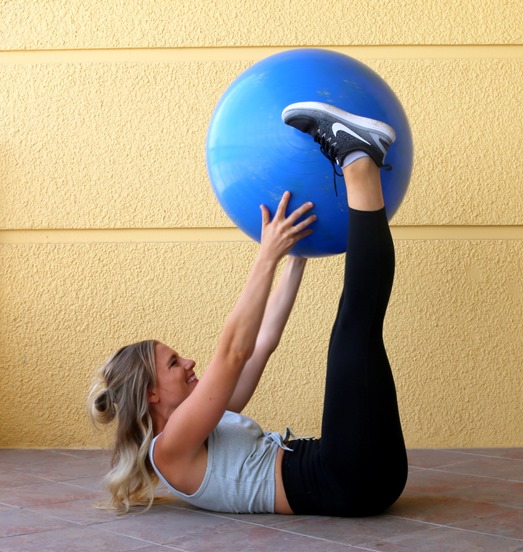 The rest of our Sunday looked a lot like the end of our Saturday and included another trip to the park, a big family dinner and plenty of quality time together. 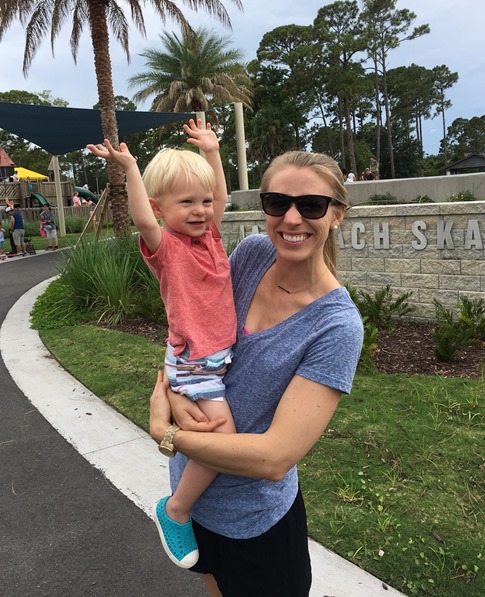 Our week in Jacksonville should be a fun one! We have some activities on the agenda and I even have an appointment to get my hair done which I desperately need (I think the last time I had anyone touch it was in the beginning of November) so I’m really looking forward to the next few days!

Hope you guys have a great week!