It has been another active Saturday for our little family!

After breakfast, we knew Sadie needed some exercise and took her out to a nearby state park for a two-hour hike through the woods.

We arrived at the park just as a whole bunch of Mini Coopers were pulling in. 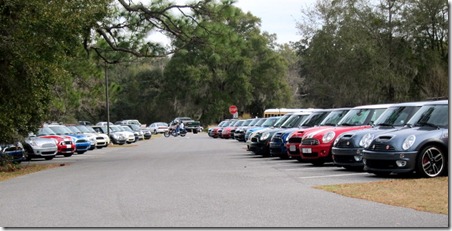 Apparently there was some kind of a Mini Cooper meet up held around noon today at the park for a cook out. 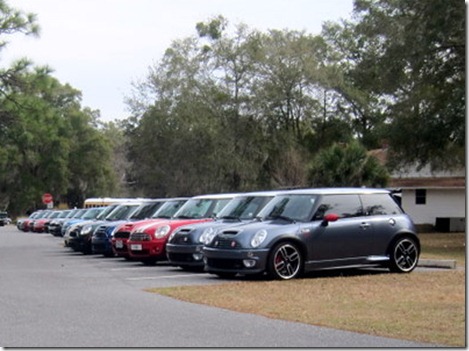 As we drove in behind the group of Coops, we noticed a bumper sticker on the one in front of us that said, “Your SUV is a POS.”

We just happened to be riding in Ryan’s SUV and I asked him if he had a piece of scrap paper that we could use to quickly make a make-shift bumper sticker that said, “Your Mini Cooper is a POS,” and then park right in front of that guy.

I’m pretty sure our car would’ve been keyed by all of the angry, retaliating Minis, but at least it would’ve made me laugh.

Our hike was less adventurous than our previous hike… but in a good way!

We did see some wildlife though, but it was much less life threatening, so that’s always good. 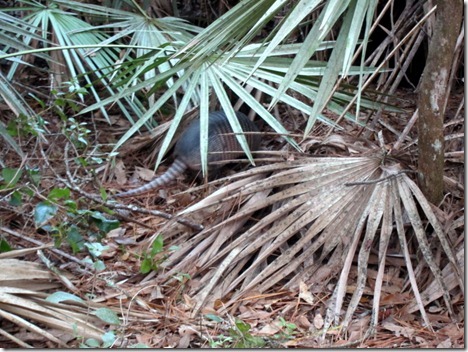 We also saw a very curious deer. We stood on the path looking at the deer for quite a while as it simply stared back at us. Sadie was a good girl and didn’t even try to stalk it! 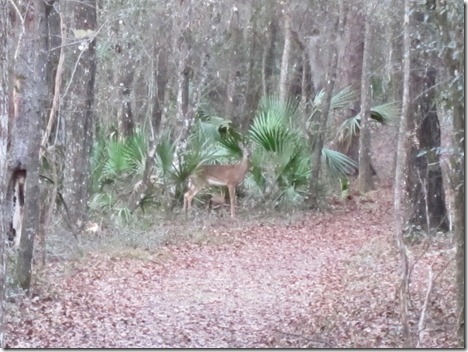 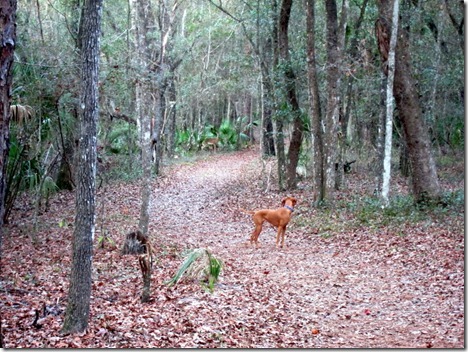 Can you see it? It’s in front of Sadie to the left in the above picture.

After our hike, we came home to shower and eat a quick lunch.

While I was preparing lunch, I popped up some Orville Redenbacher’s smart pop popcorn to help satisfy my hunger as I cooked. I think my craving for the popcorn was sparked earlier in the day when I emailed the company the questions you guys submitted for Bernie as part of my partnership with them this month.

I wanted the saltiness and was too hungry to wait for lunch! 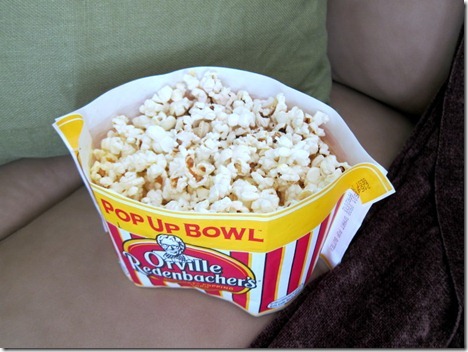 I ate about half of the bowl before rolling it up and clipping it to save the rest for another snacky time.

Today’s lunch included pork chops that I made by frying them in a pan after dipping them in a beaten egg and Italian breadcrumbs. 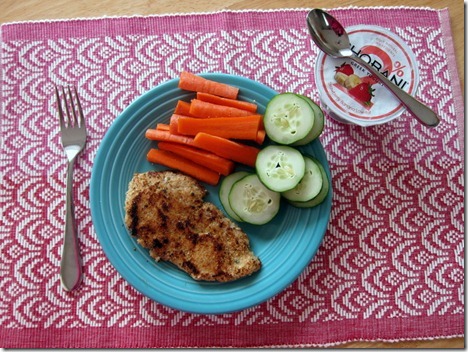 Carrots, cucumber slices and a cup of Greek yogurt rounded out the meal. 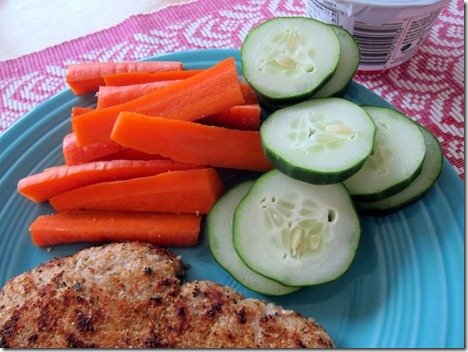 Then it was time for a mid-day date!

As I previously mentioned, Ryan gave me a “Tour of Ocala” for Christmas, with tickets to a bunch of different area attractions to get a feel for our new hometown.

Our first activity was zip lining and today we headed out for activity number two! 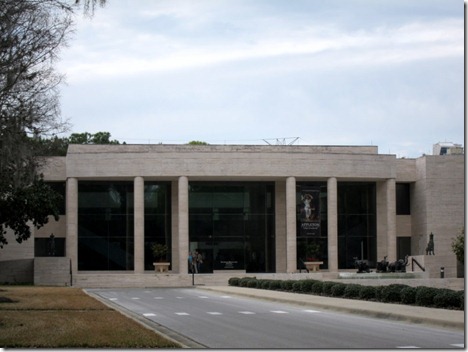 The Appleton Museum of Art! 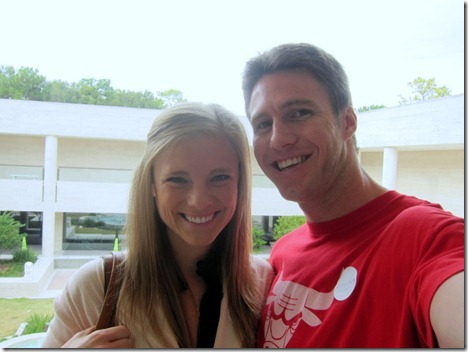 I have a soft spot in my heart for art museums since I used to work at the Orlando Museum of Art and enjoyed exploring.

Though we had a good time checking out the artwork, Ryan and I decided to make things interesting and made up fake stories to go along with some of the paintings and sculptures to tell each other. 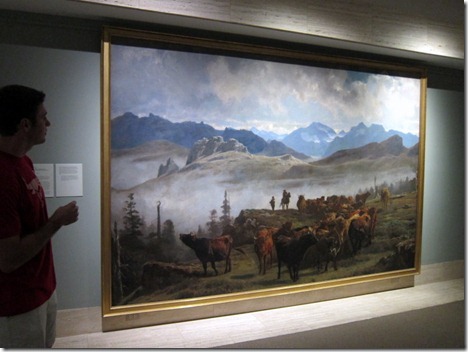 Ryan explained that the above painting was miraculously inspired by the movie City Slickers. Clearly it was way ahead of its time, as it was painted in the 1800s. Not sure how exactly you can be inspired by a movie that doesn’t exist yet, but it is quite amazing.

Ryan went on to explain that the artist intentionally made the painting the size of a huge wall as a big “screw you” to his family, forcing them to hang the ginormous painting in their house after they made him move from the city to the country. Fascinating, huh?

My favorite part of the museum was the Katharine Hepburn exhibition. 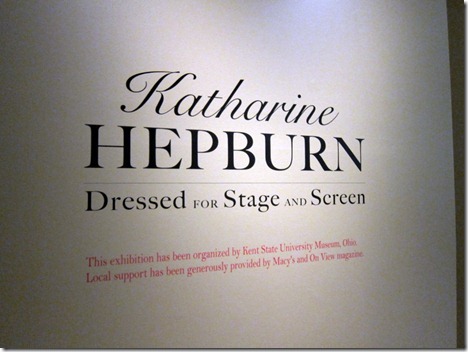 The traveling exhibition featured a large collection of the dresses and costumes Katharine Hepburn wore throughout her life. Unfortunately no pictures were allowed in the exhibition, but the dresses on display were gorgeous!

On our way home from the art museum we ran a couple of errands before hitting up Dairy Queen to share a large Oreo brownie blizzard. 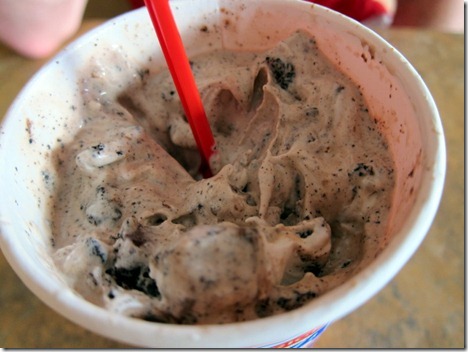 The fudge they added to the vanilla soft serve absolutely made the Blizzard for me. So delicious.