Yesterday was a big day in our house! Chase had his very first day of preschool and while it was only a half-day (he’s going for two half-days a week), it still felt like a big milestone for us and served as yet another reminder for just how fast time is flying by with our little boy. 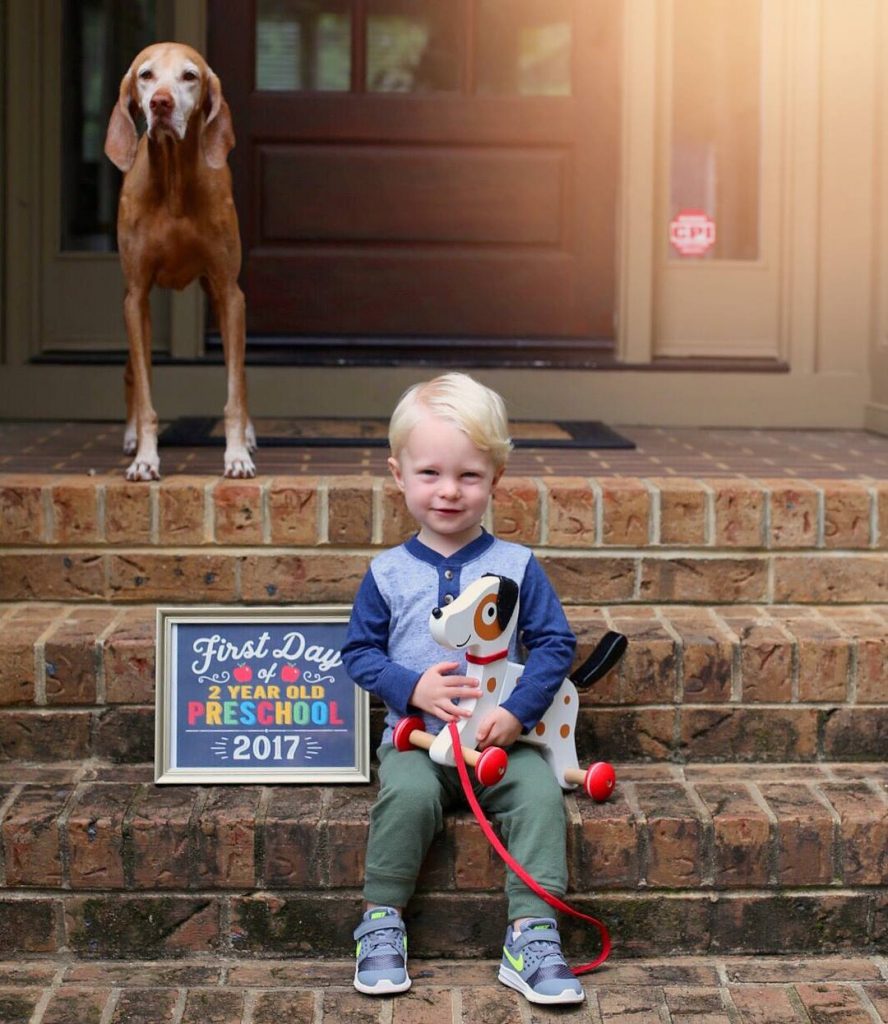 (Sadie kills me in the above picture. It’s almost like she’s saying, “Go learn, little boy. The kingdom is mine again. Muhaha!”)

We’ve been talking up school like crazy in our house and trying to get Chase excited for time with his teacher and classmates (and time away from mom and dad). Yesterday morning, when he was up and ready for the day, I told him it was his first day of school and we talked about his teachers and the fun things he might do over breakfast.

With about 15 minutes to spare, I took Chase (and his wooden dog, of course) onto our front porch for the obligatory first day of school pictures and I’m 100 percent convinced the only reason the pictures turned out well is because Chase was busy “teaching” his dog and telling him all about the apples on his sign and spoiling him with pets, cuddles and scratches. 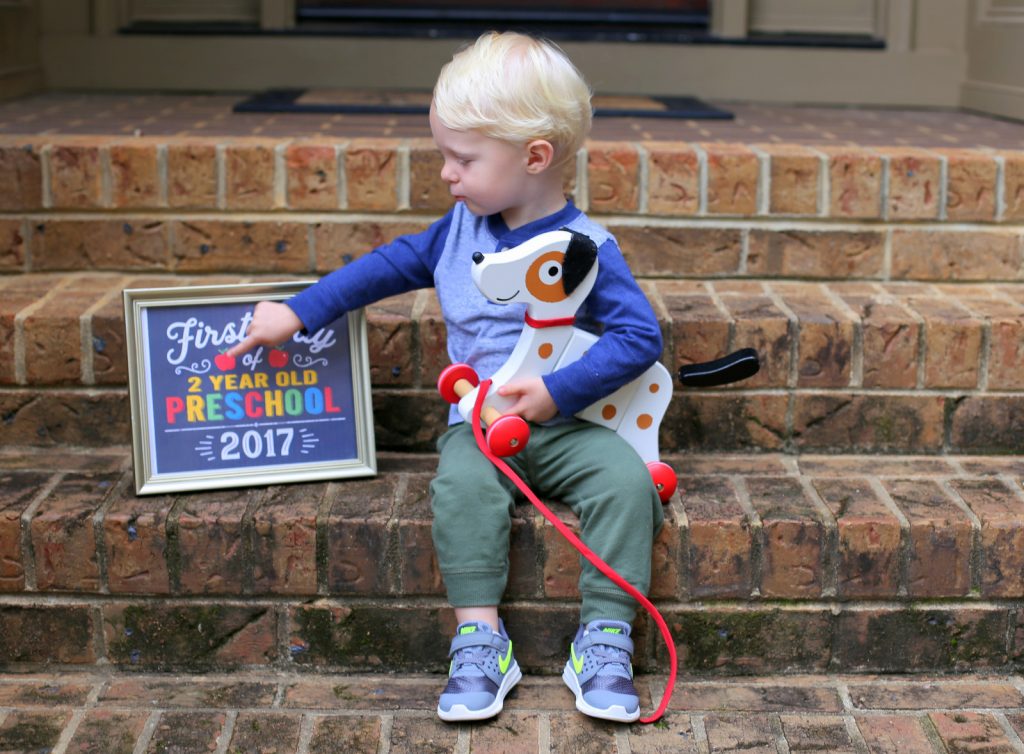 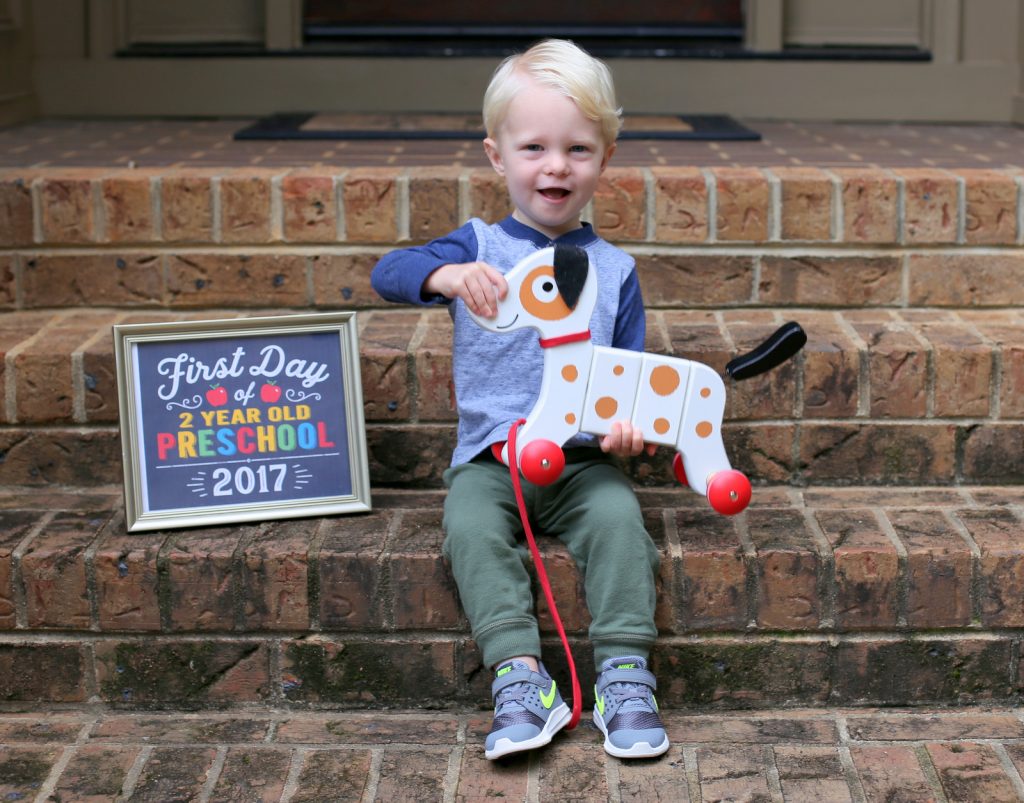 As we began loading everything into the car, it started to pour so we drove off to school in the rain and sang “Ducks Like Rain” until Chase was over it and requested “The Lion Sleeps Tonight,” his current go-to song. When we arrived, Chase seemed excited as we dashed inside but I quickly felt his little hands dig into me when we entered the bustling halls of his school. I could feel his apprehension and barely had time to give him a quick hug and kiss goodbye before he was ushered into his classroom. The drop off happened SO fast! (They don’t let the parents in the classroom during drop off at Chase’s school to try to avoid complete meltdowns and prolonged goodbyes.)

Of course I immediately darted to to window that allows parents to look in and observe their children and saw him spot his friend Claire, wave an enthusiastic hello and join her at a table to play with toys. Phew! Instant sigh of relief. Apparently he forgot all about mom when new toys were available!

I feel so, so fortunate when I think about all of the time I’ve had with Chase so far. I know I’m incredibly lucky and I’ve treasured our time together so much. To be able to spend my days with him means so much to me and it’s not something I take for granted for one second. When I think about the emotions I felt after leaving him at preschool, I think my sadness was less tied to the physical act of leaving him at school (I truly think it will be a wonderful thing for him) and more tied to the fact that preschool signifies growing up in my eyes.

Even if Chase is still years away from “real” school, beginning preschool is just one of those milestones that reminds me I cannot go back in time and relive the baby days with my toddler who still very much feels like my baby. Experienced moms: Do your kids ever stop feeling like your babies!? Sometimes I find myself wanting to press pause on this phase when Chase is still my number one little buddy and we are the center of each other’s worlds. But then I see him do something new, something more independent and realize that watching him grow and change and become his own little person is so amazing.

After I dropped off Chase, I headed to boot camp for my morning workout and was joined by my friend Lauren whose daughter is also in Chase’s preschool class. Of course we chatted a mile a minute about the drop off and our kids but eventually focused on the workout and ended up looking nice and sweaty 45 minutes later thanks to a killer cardio session.

Once the workout was over, I caught up with some friends before heading home to shower, grab a snack and tackle my inbox for an hour before swinging by the grocery store on my way to pick up Chase. (When people told me the small amount of time kids are in half-day preschool flies by, they weren’t kidding!)

When I arrived at Chase’s preschool, I joined in the pickup line and waited for my turn to pick up Chase. At Chase’s school, one of the preschool teachers brings the kids out into the hall one-by-one and chats with each parent for a minute or two to give them the rundown on how the day went for their child. I couldn’t wait to see Chase and scooped him up into a big hug when he came out. He had a big smile on his face but looked completely pooped! His teacher said he did really well and acted like he’d been at school for ages. Another big sigh of relief! (Also, it sounds like the children who cried and resisted drop off at the beginning of the day did SO well, too. Yay! I just wanted to share that here in case any parents out there are worried about a tearful drop off going into the school year. I certainly was and the teachers said it’s to be expected as kids adjust to a new environment and being away from their parents.) 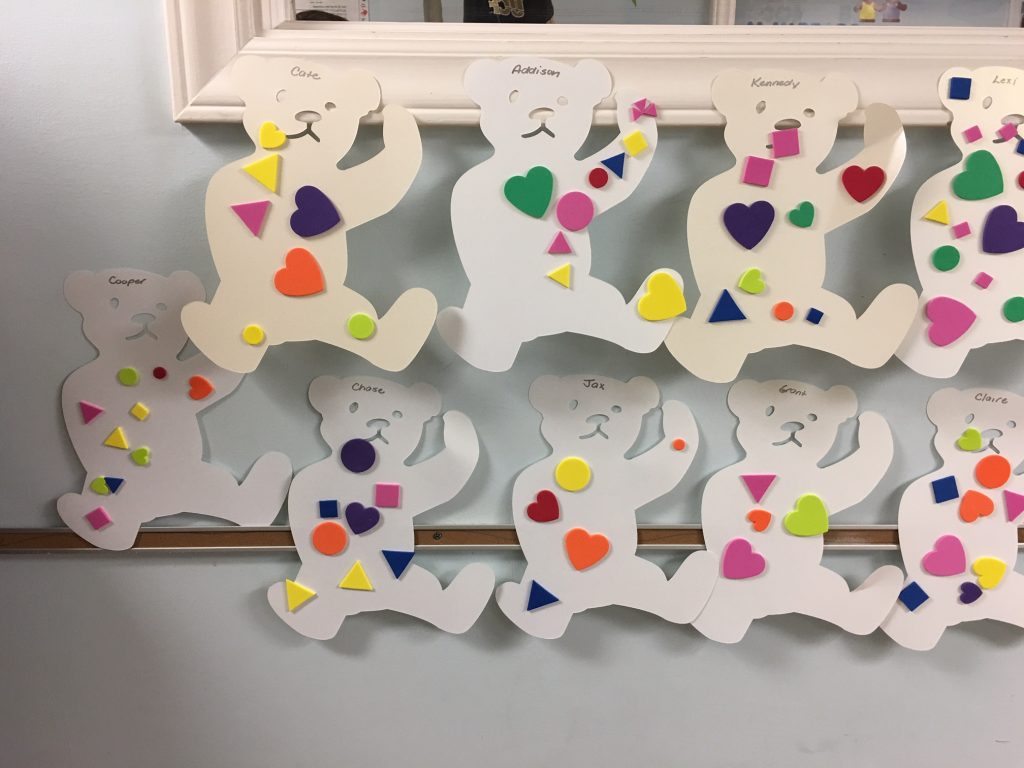 As I loaded Chase into the car, I asked him about his day and he told me (in toddler-speak, of course – we’re not getting full soliloquies from him yet) that he played with a soccer ball, rode on a bike, listened to a story about bears and played with Claire and Cooper. He also cried when I told him we were going home and wanted to go back to school, so I drove home feeling quite happy with his experience, even if mom was old news and school was way cooler to him after his first day.

Once we arrived back home, I gave Chase a snack (they have lunch at school) and unloaded groceries before he went down for a much-needed nap. Once he was sleeping, I did a little dinner prep and threw together an avocado-massaged kale salad topped with chopped chicken thighs, roasted butternut squash, hemp seeds and nutritional yeast for lunch. (Check out my Instagram for a more detailed rundown of this salad if you’re interested.) 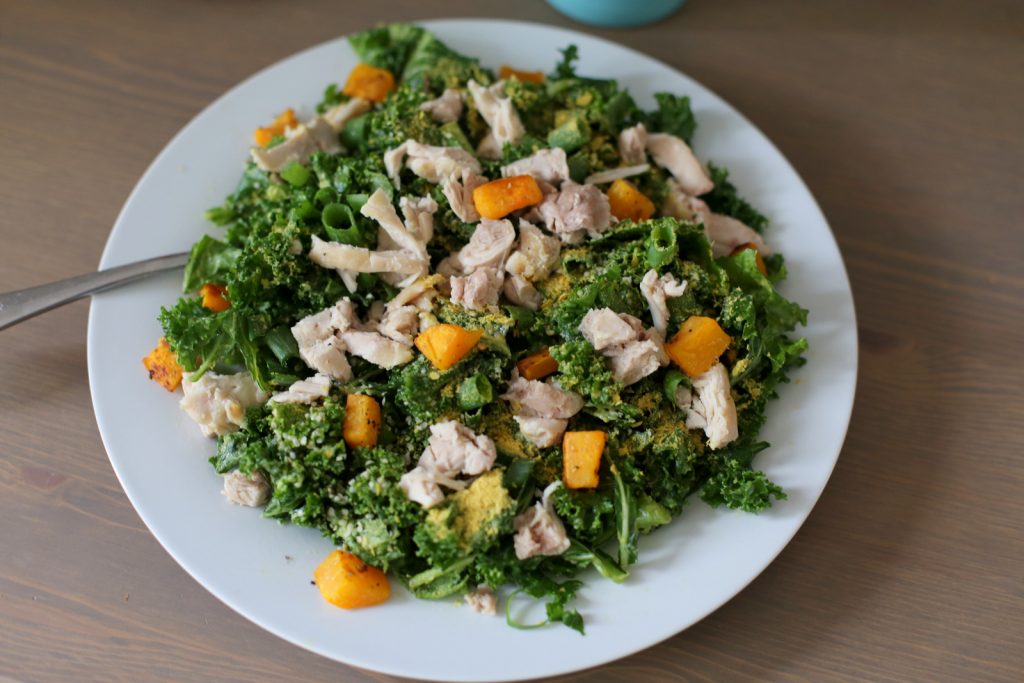 I ate my salad as I began typing up this blog post and tackling a few things on my blog to-do list.  I was convinced Chase would nap like a total champ after such a busy morning at preschool, but he was up a little more than an hour later, ready for more playtime.

I figured some quiet time at home would be good after his busy morning, so we hung out around the house, read books, drew pictures on his easel and colored before it was quite clear Chase was ready to get out! Since it was pouring outside, I texted a few friends to see if anyone wanted to meet up at Gymboree’s open gym for an afternoon play date. My friend Laura replied that her baby was sleeping but her toddler was ready for friends and invited a couple of us over to her place instead. We spent the next hour and a half or so at Laura’s before driving home and pulling into the driveway a few minutes before Ryan arrived home from work.

Ryan and Chase played with toy airplanes for a bit while I got dinner ready and we sat down for a family dinner a little before 7 p.m. Chase talked a bit more about his school day when Ryan asked him questions and then it was time for his bed time routine.

Once Chase was settled in his crib, Ryan and I watched an episode of Big Brother before turning the lights out and trying our best to go to sleep nice and early.

I hope you all have a great Thursday and that your week is going well so far. Thanks so much for stopping by the blog today! See ya tomorrow for Things I’m Loving Friday!!