Navigation
Hello! I am checking in a day later than I anticipated this week because yesterday threw me for a bit of a loop. Chase threw up in the middle of the night on Sunday night and somehow didn’t call out for us and went back to sleep. Needless to say, in the morning everything was a bit of a disaster so we kicked off the day with an early morning bath and lots of couch time. He seemed totally fine on Monday with the exception of a lower-than-average appetite but I figured a cozy day at home would be the best idea. We laid low in our pajamas and blogging took a backseat since I was in mom mode all day long and naps didn’t overlap for the boys.

By the end of the day yesterday, Chase was eating normally and told me his tummy felt “a lot a bit better”  so my hopes are high he’ll wake up this morning feeling great. Poor dude!

A Weekend with Nona and Papa

Backing up a bit, I wanted to share a glimpse into our weekend with you guys! My mother-in-law and Les came to visit for the weekend and we loved having them here! They arrived on Friday and we spent Friday night catching up and headed off to bed at a decent time so we’d all have energy for Saturday’s activities.

When Diane and Les initially planned to come to Charlotte, I had the idea to schedule Chase’s birthday party during their visit so they could be a part of the fun. When I reached out to Diane with the idea, she was all about it so our Saturday centered around Chase’s special day!

We spent the morning at the house digging into French toast casserole and assembling goody bags as Ryan and Les put a special surprise together for Chase in the garage. 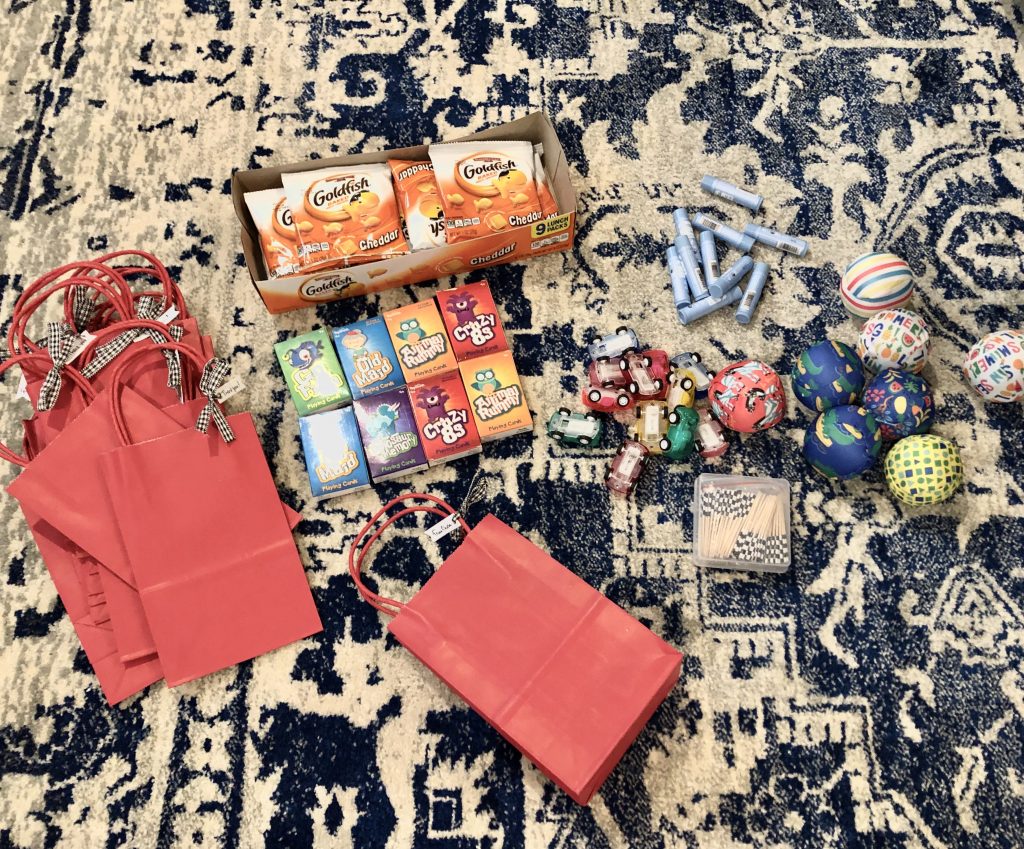 Diane and Les knocked the ball out of the park with an incredibly generous birthday gift — A Power Wheels Jeep! 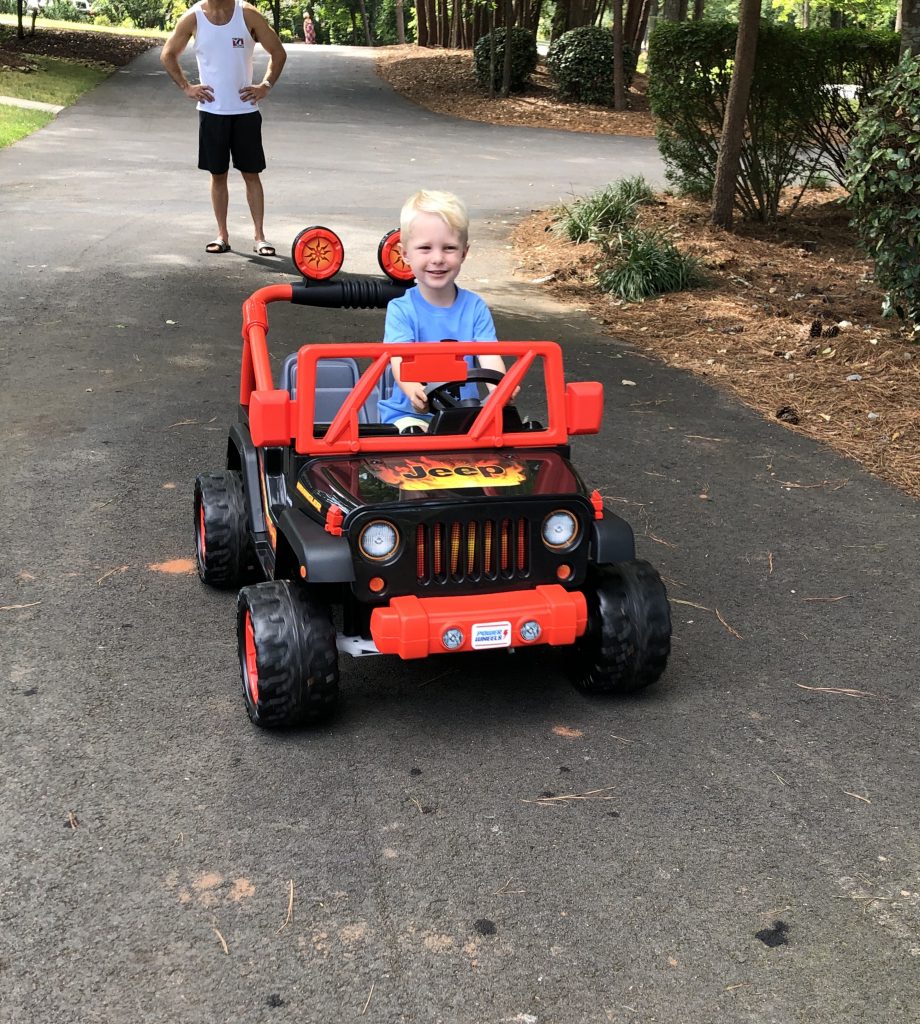 Chase was in heaven as he drove his new Jeep and we had to coerce him off that thing in order to make it to his party in time!

We planned Chase’s party at The Pit in Mooresville after he had the best experience driving go karts on the Peanut Track for kids back in April. We figured he’d have even more fun driving the mini go karts with his friends and planned a party with pizza, cupcakes, go karts, bumper cars and arcade fun for his fourth birthday celebration. (His actual birthday is at the end of the month.) 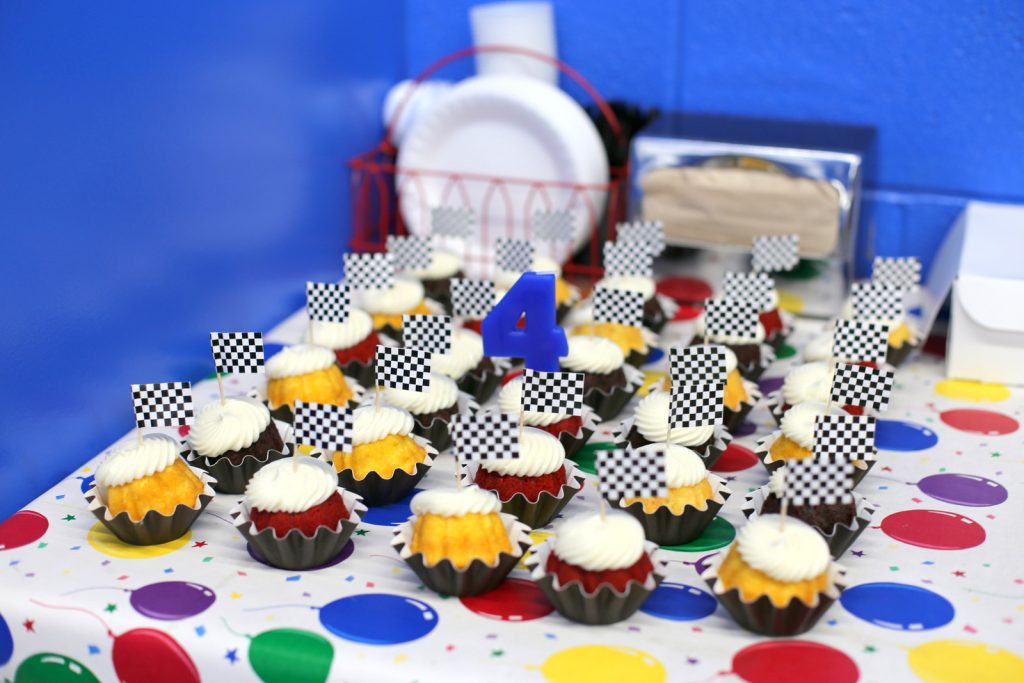 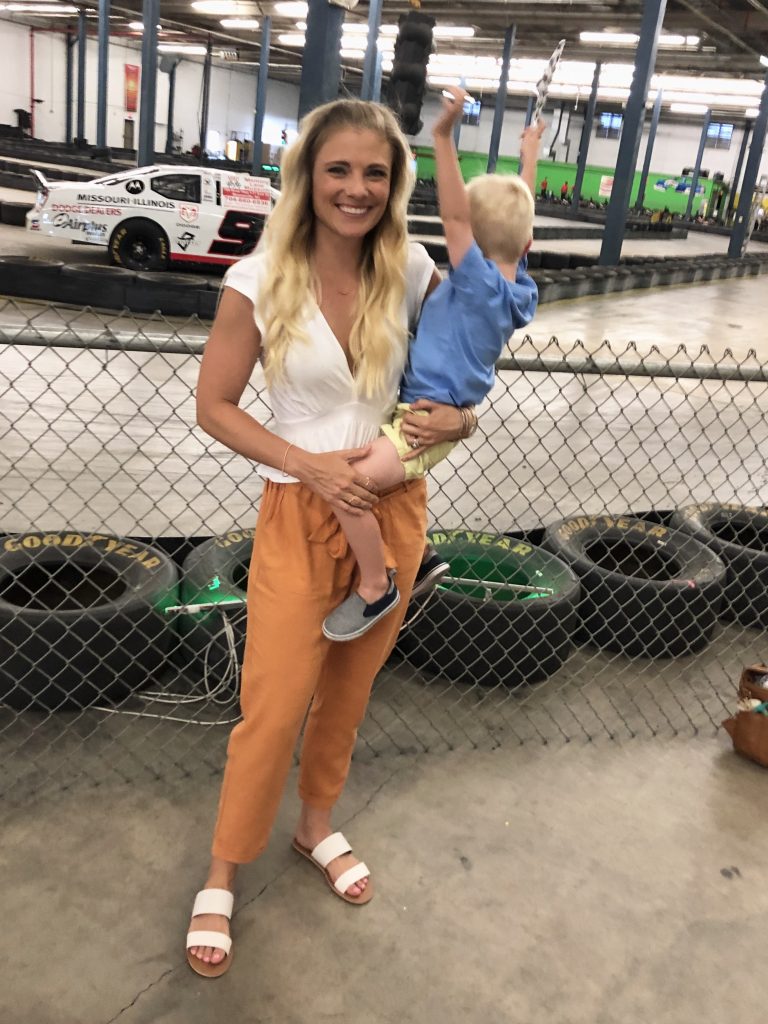 (Chase was clearly too distracted by the adult go karts to take a good pic!)

The Pit took care of everything other than goody bags and cupcakes which made the whole ordeal a breeze! I just ordered bundtini cupcakes from Nothing Bundt Cakes, topped them with some race car flag cupcake toppers and we were good to go! 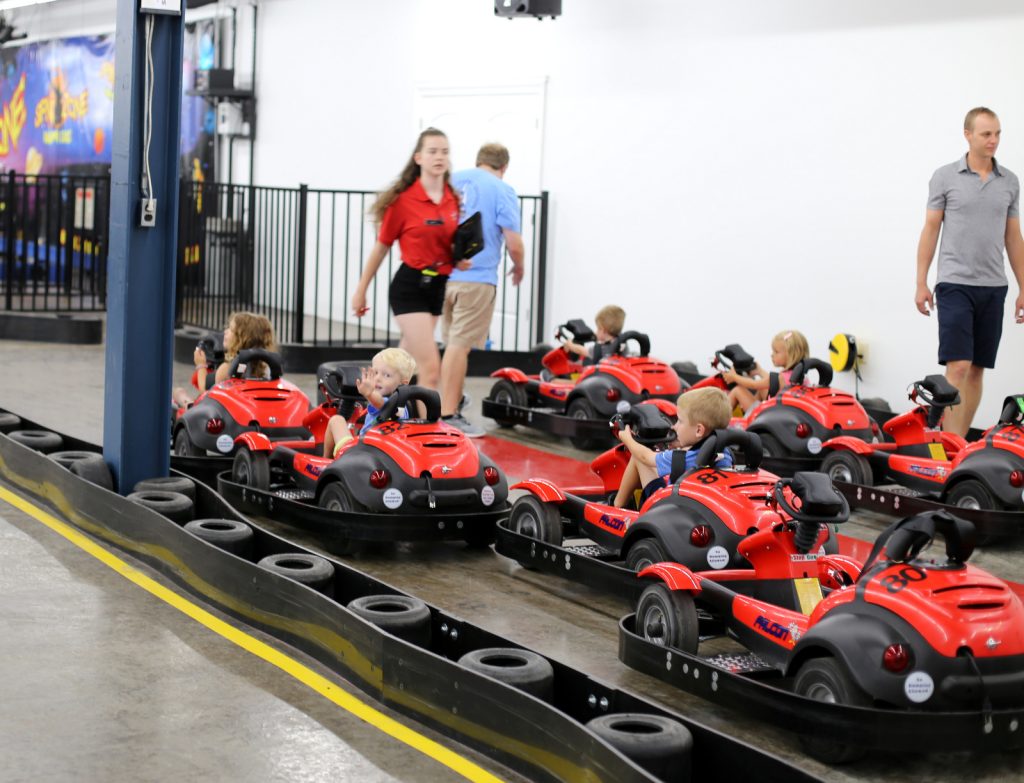 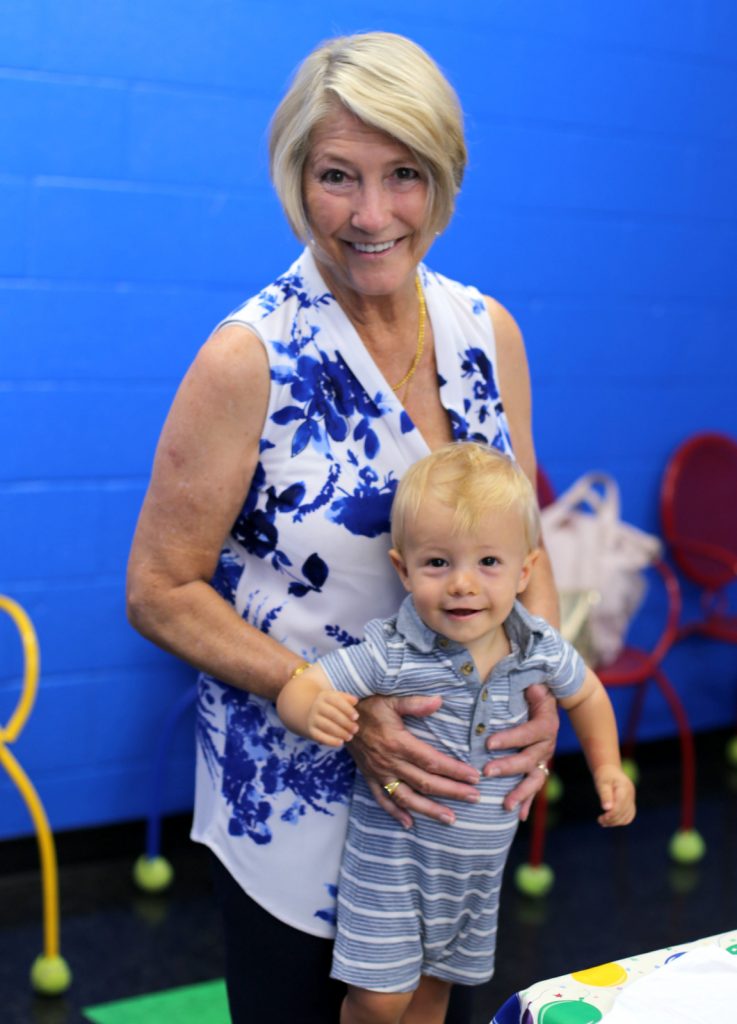 The party kicked off with the go karts on the peanut track and watching a bunch of three- and four-year-olds race was too darn cute! 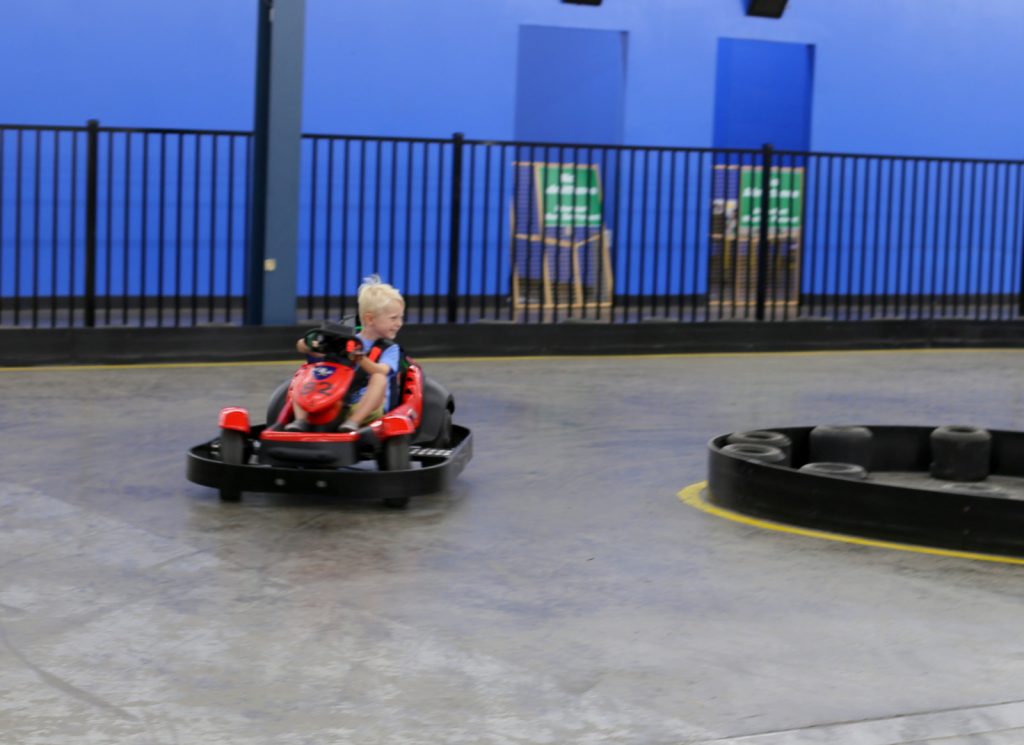 Chase was in his element and driving like a champ until a bumping incident occurred that totally thew him for a loop. Chase is a very cautious kid, especially when it comes to driving and trying new things (the first question he asked when he got his new Jeep was, “Where is my seat belt?”) and, to be honest, we were all a little surprised by just how hard the kid-friendly karts could bump! I’m not sure if any of the other parents out there can relate, but all it seems to take is one little incident to occur to upset Chase and then he’s off his game for a while and that’s how things stayed until close to the end of his party.

Chase managed to have fun during the bumper cars with Ryan and ran around smiling with his friends but I could tell he just wasn’t himself and seemed a little more sensitive than usual throughout the afternoon. 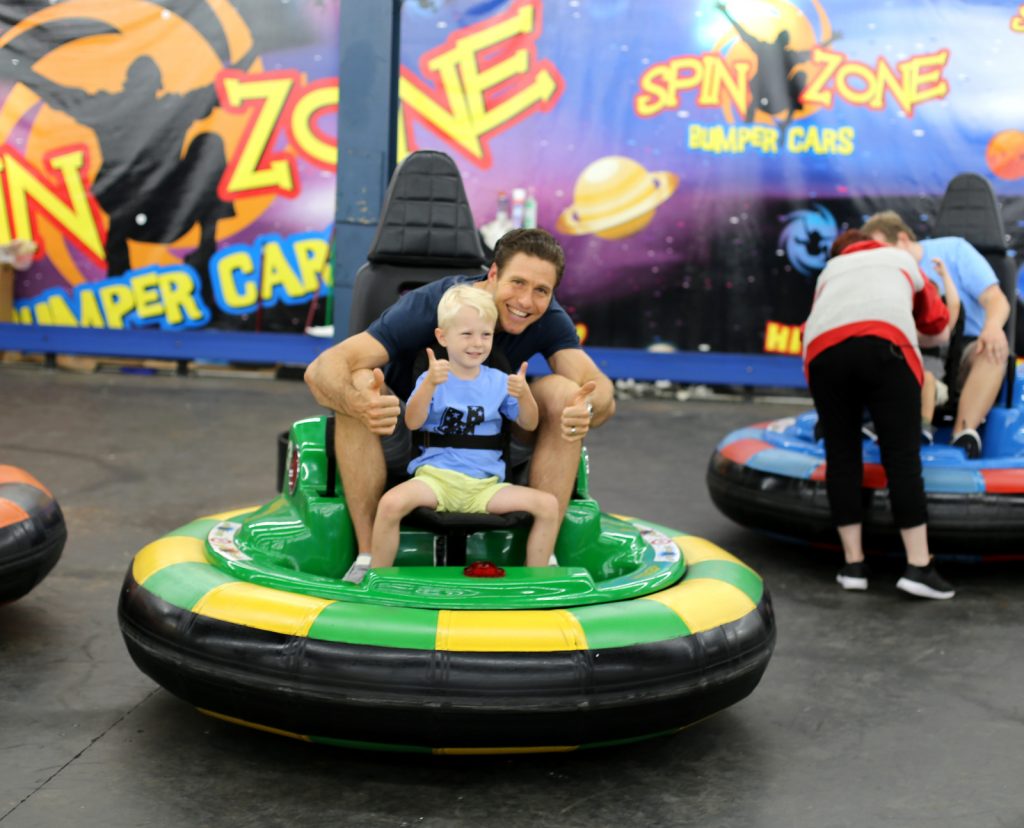 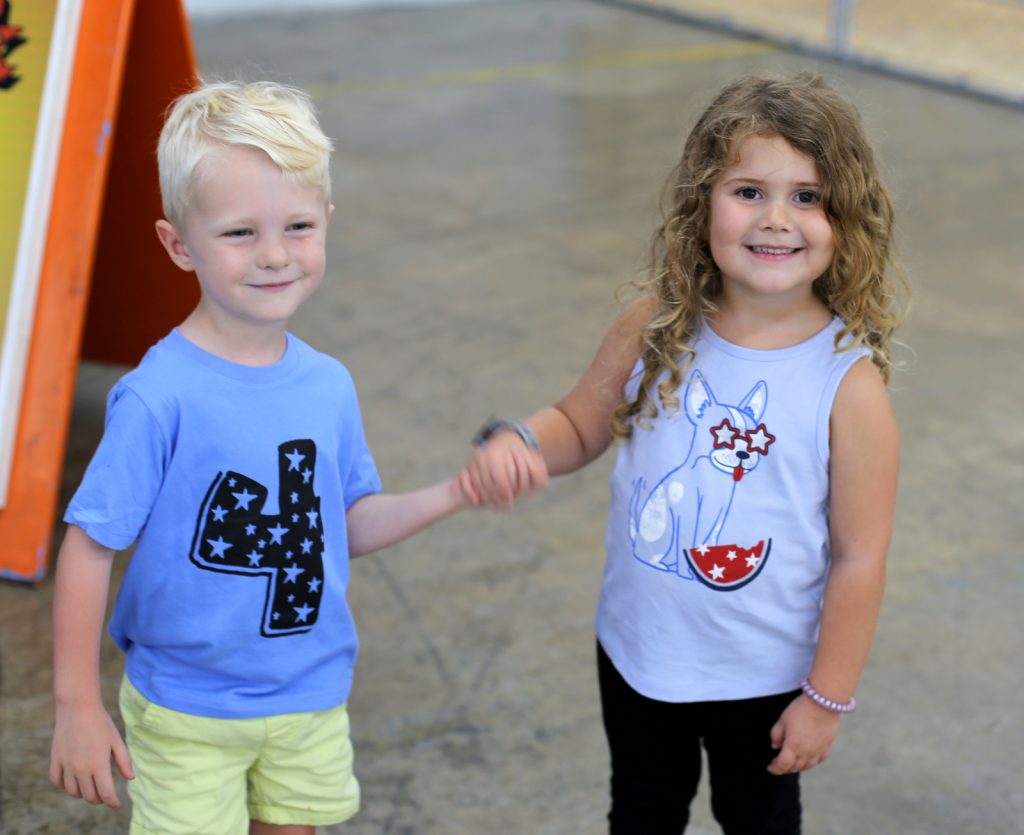 On the bright side, he loved his cupcakes and the arcade was a mega hit with him and all of the kids! 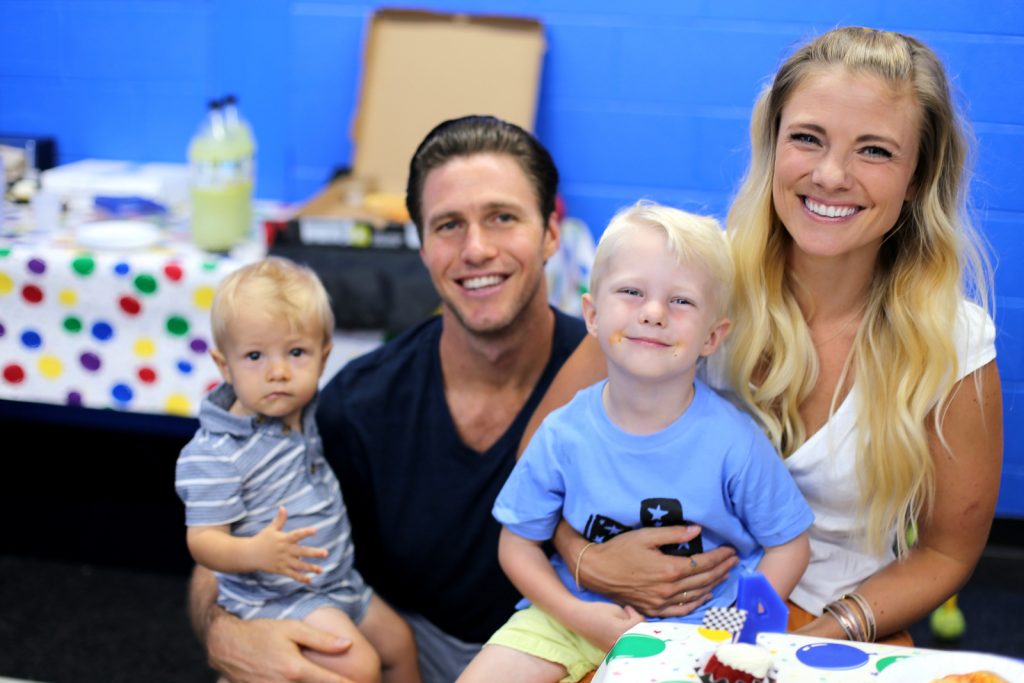 We gave out arcade tokens to all of the families at the end of his party, expecting most families would save them for another time and want to head home but we were pleasantly surprised when all but one family stayed to play arcade games! 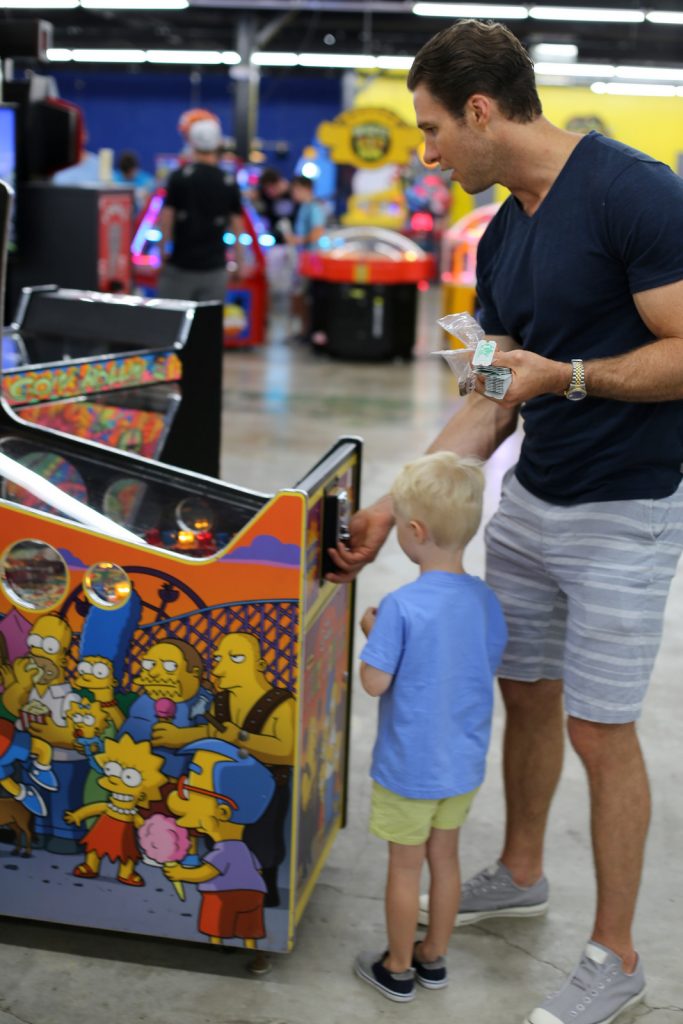 Chase was psyched that he had enough tickets at the end of our time in the arcade to get a growing dinosaur and two race flags for him and Ryder to wave at the big go karts and I was just happy to see him acting more like his usual joyful little self!

We made it back home to our house around 2 p.m. and both boys promptly went down for a nap. We ended up spending the rest of our Saturday at home and enjoyed a cookout with my in-laws before putting Ryder to bed. I then offered to head to the grocery store to pick up ice cream for everyone for dessert and what was supposed to be a quick trip ended up being a bit of an ordeal. I drove Ryan’s car to the grocery store and somehow lost his keys. Ugh! I looked everywhere for nearly an hour and came up with nothing. Eventually Ryan picked me up and since Ryan couldn’t find his spare key anywhere, we ended up calling an auto locksmith to come make a new key. All is well again but it wasn’t exactly the rockin’ Saturday night I had planned.

Sunday was less eventful than Saturday but that’s what we were all in the mood for after Saturday’s birthday adventures! We kicked things off with a walk/ Jeep cruise around the neighborhood before we made our way to the siblings class at My Gym. 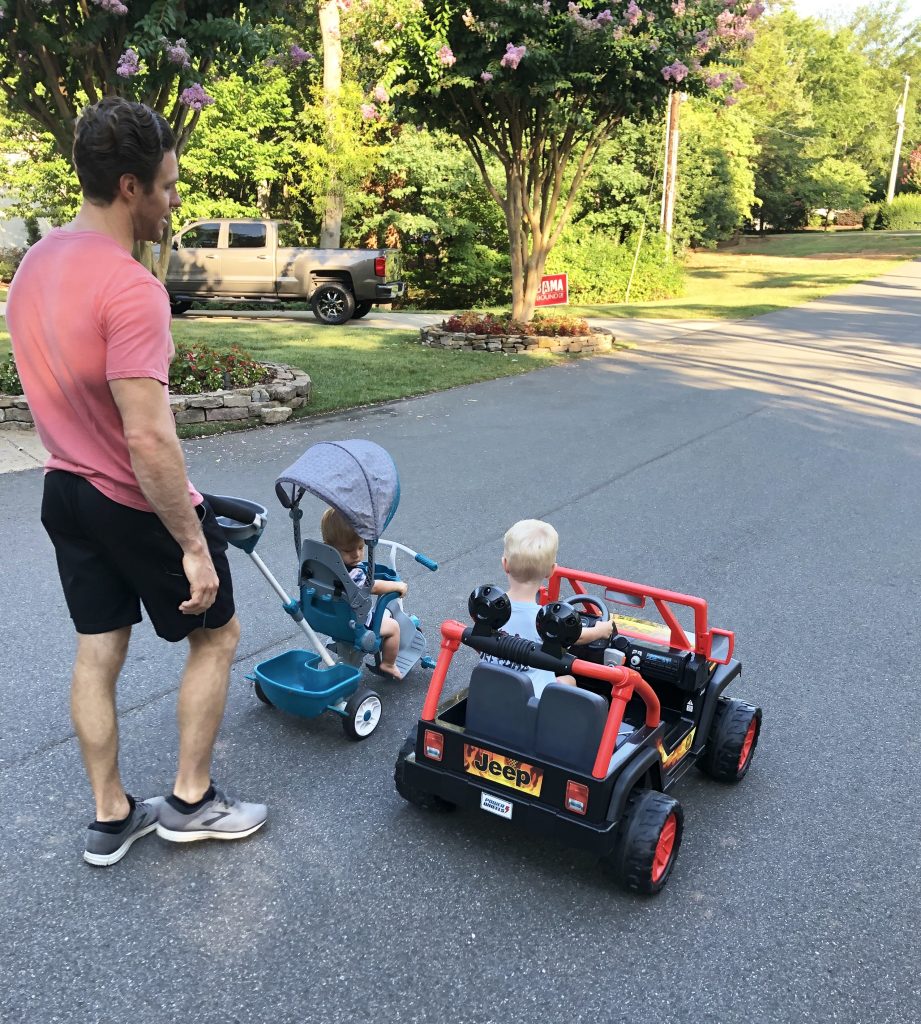 The My Gym class was just under an hour and the boys had a blast practicing their gymnastics skills and running/crawling/toddling around. 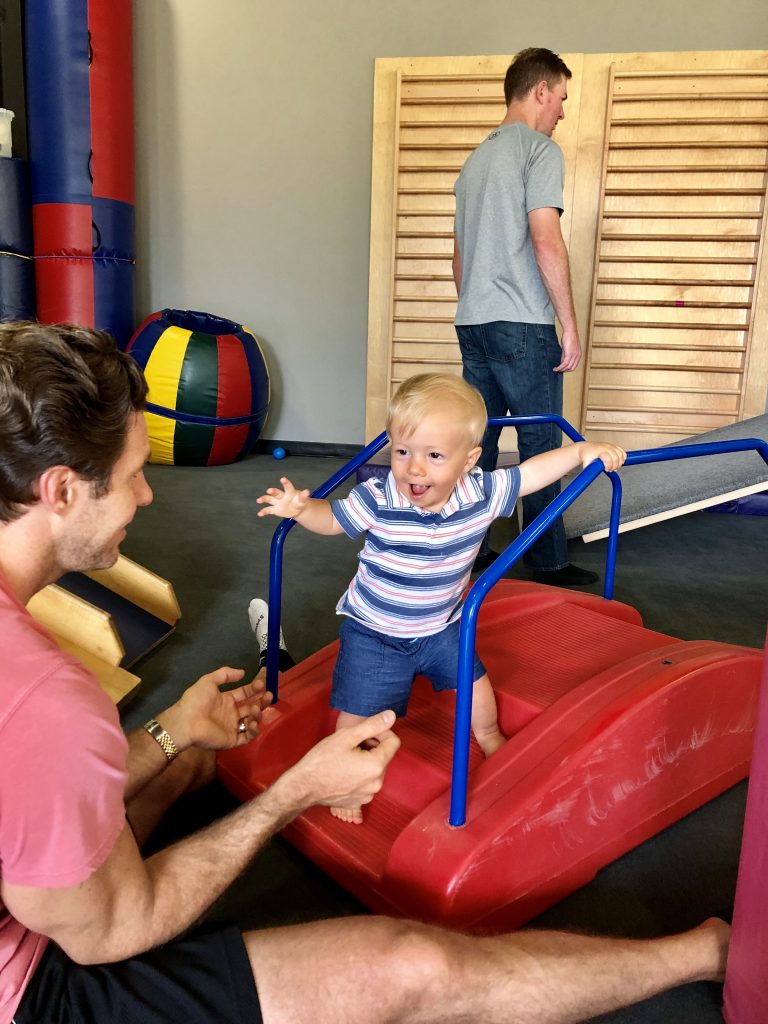 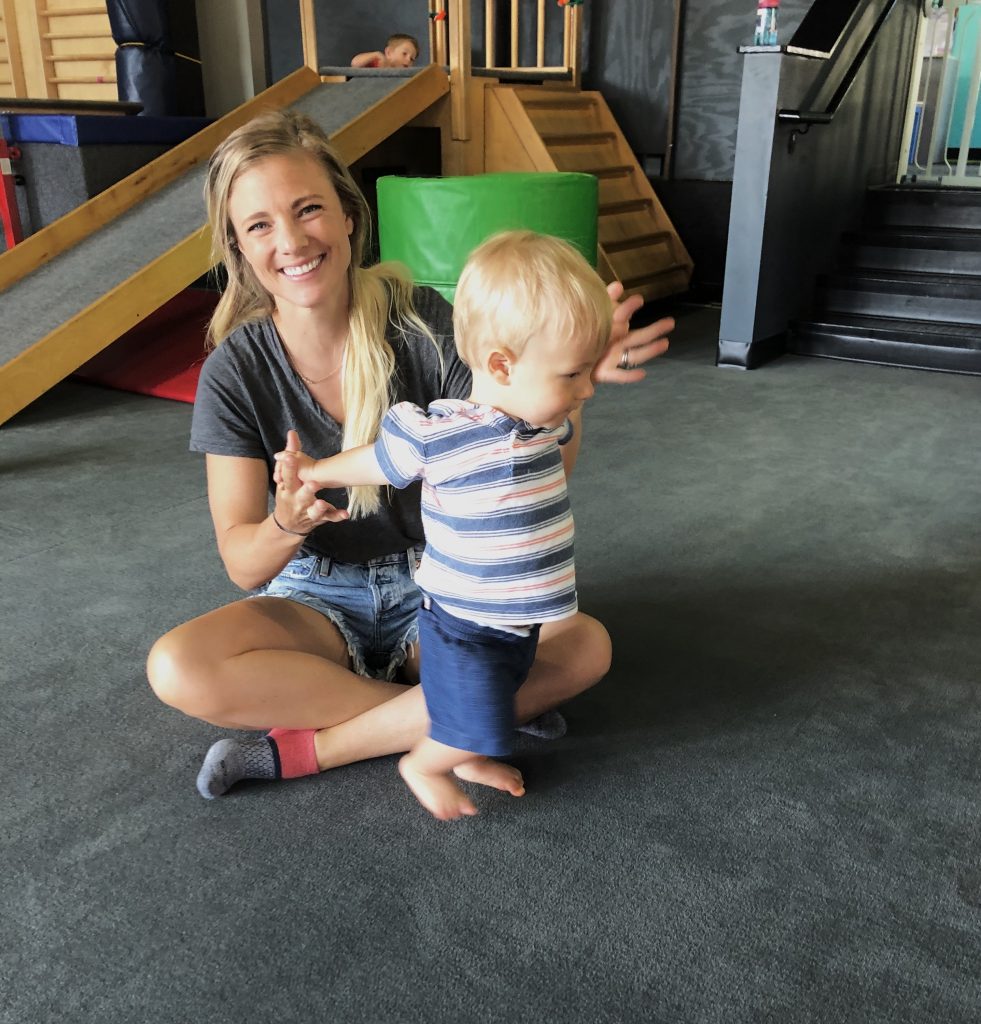 When we got home, we put both boys down for a nap and while they slept, Diane and Les taught us how to play Mexican Train Dominoes and it was unbelievably fun! 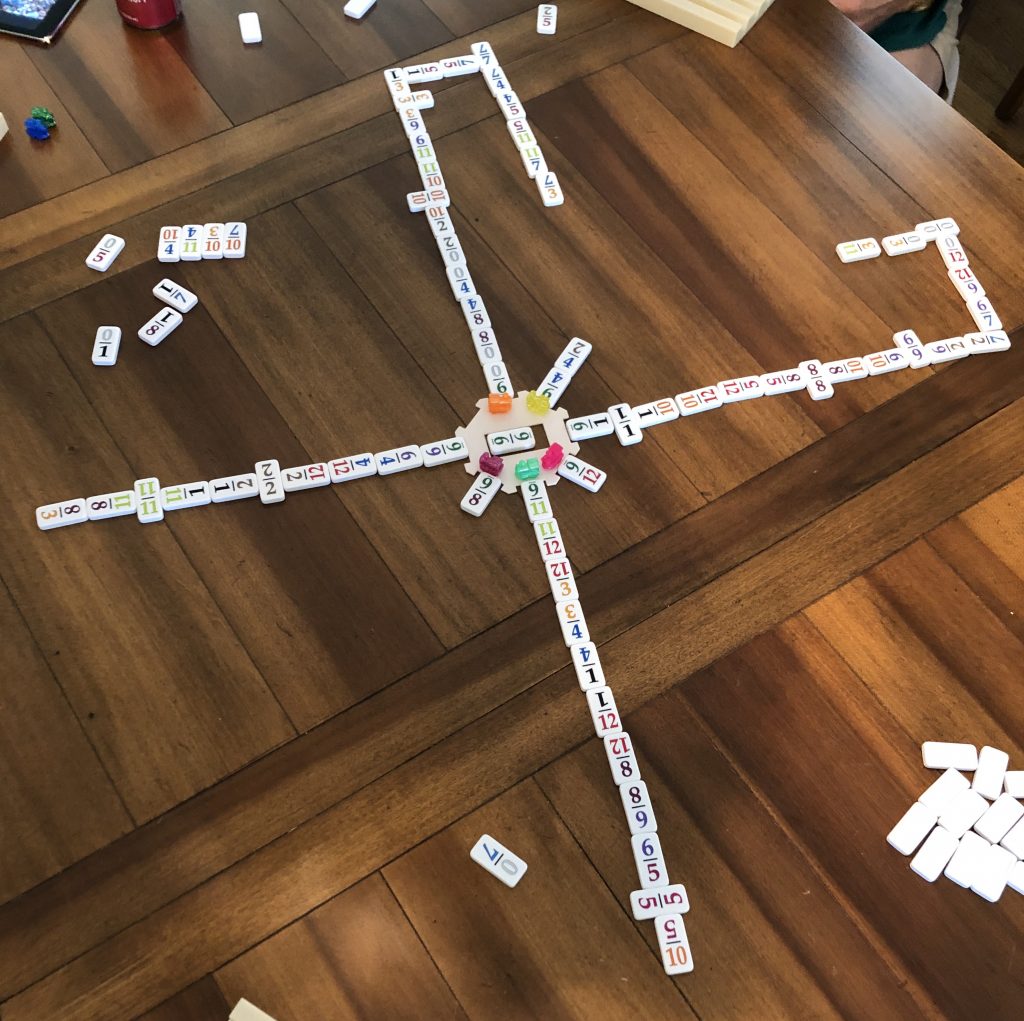 Ryan and I both enjoy playing games and this one was new to both of us. It didn’t take long to catch on and we all got a little too into it! We played right up until the boys were awake and then we changed into our swimsuits and headed out for an afternoon on the lake. 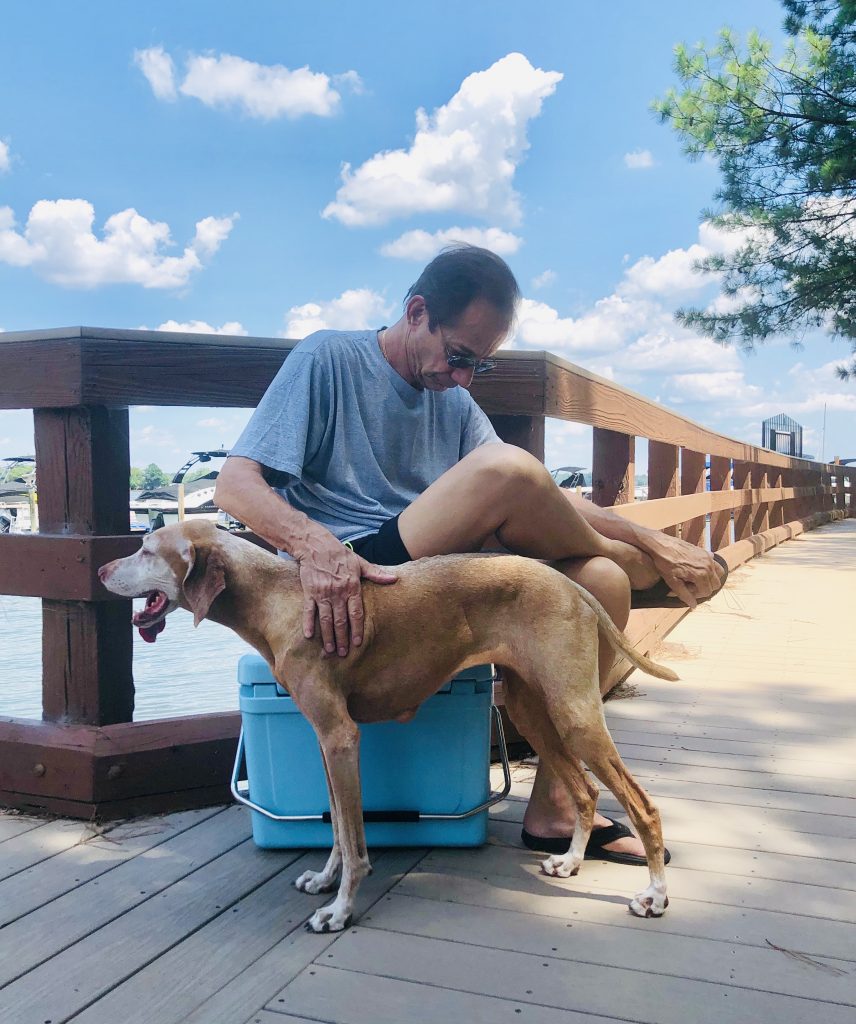 We threw down our anchor at a little beach and floated around for a while before digging into the sandwiches and snacks we packed. 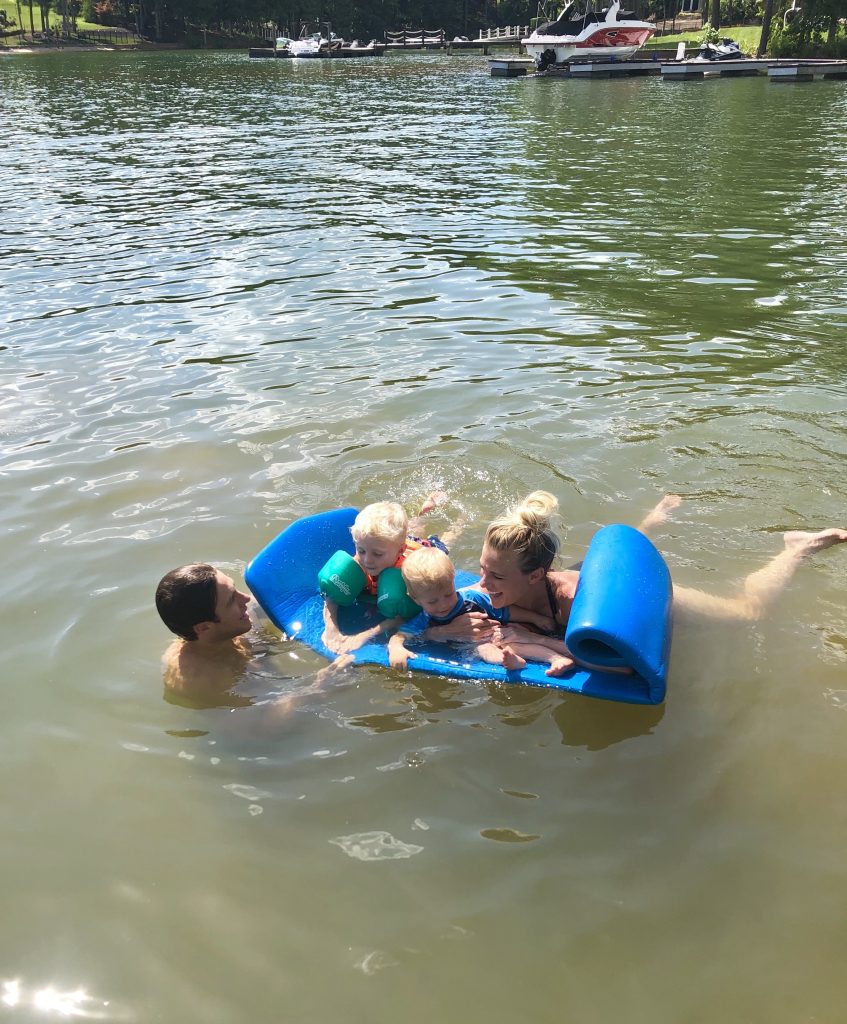 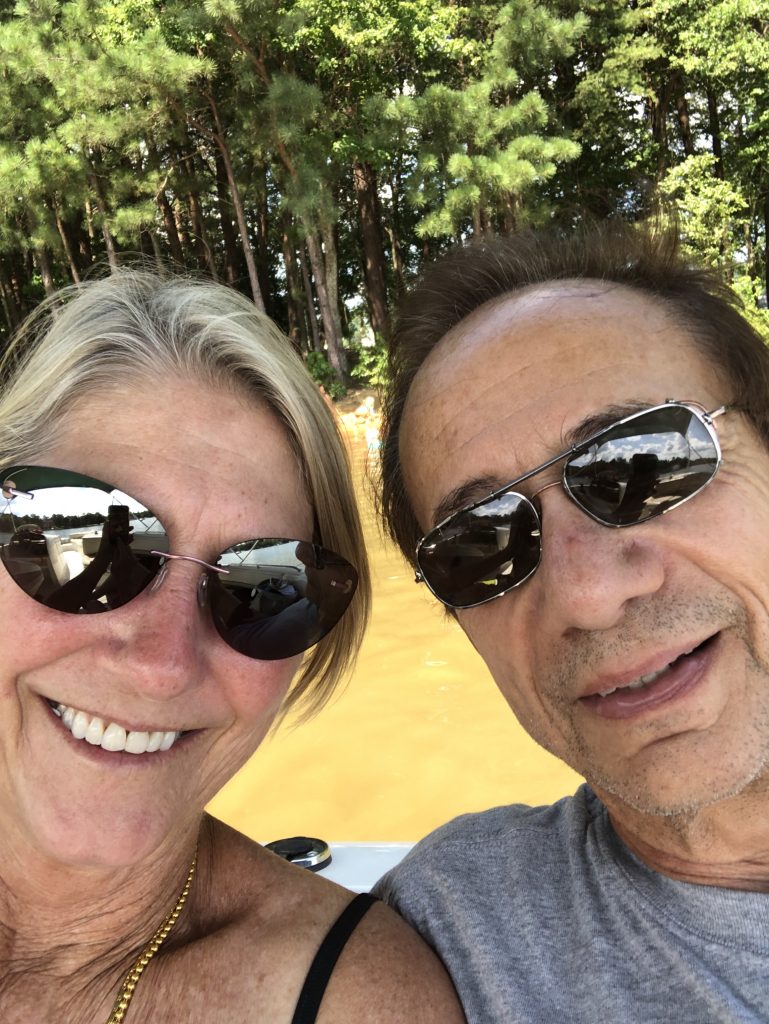 By the time we made it home, it was nearly 6 p.m., so we quickly bathed the boys, fed them dinner and managed to get them to bed around 7:30. This opened up our evening for some distraction-free dining with Diane and Les and we grilled up some shrimp and scallops for our crew to enjoy before we spent a few more hours playing Mexican Train Dominoes before bed. That game is addicting, I’m telling you!

Diane and Les headed home in the late morning on Monday and we are so glad they made the trip up to see us!

As for the week ahead, it looks like it is going to be a H-O-T one in Charlotte! I’m hoping to fill our days with summer fun including pool play dates, park playtime and more. I hope to check in with you guys again soon! Have a great Tuesday!