The highlight of my weekend was, without a doubt, the Donna 26.2 Breast Cancer Marathon relay. 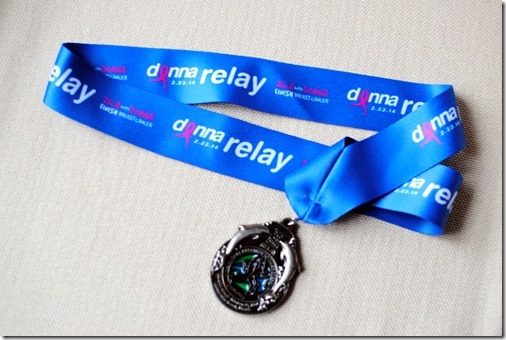 Participating in this relay was my dad’s idea. He watched runners pass by my parents’ place during the race last year and felt incredibly emotional and inspired since my family has been directly touched by breast cancer. When he asked whether Ryan, Leslie, Ross and I would be interested in running in the relay with him in honor of my mom, we were all 100 percent in from the beginning.

We named our team the “Salt Water Cure” because, for as long as I can remember, my dad has believed that salt water (the ocean) can cure anything.

Ryan and I hoped to arrive in Jacksonville early enough on Saturday to attend the race expo and relax a little before bedtime, but we ended up arriving at 10 p.m. because Ryan had to work all day. It was a big bummer, and we ended up staying up past midnight chatting with my family, but fortunately the energy of race day helped me feel awake and excited when my alarm went off at 6 a.m.

Thanks to my dad for attending the expo and grabbing race bibs, t-shirts and goodie bags for all of us! 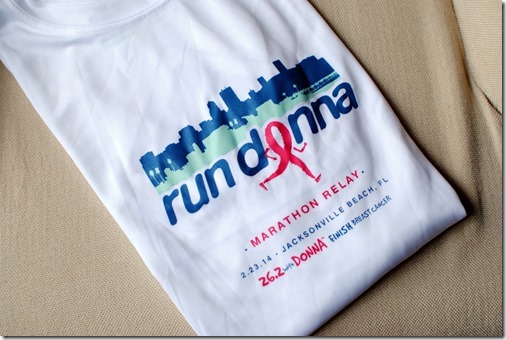 I love the look of the backpack. 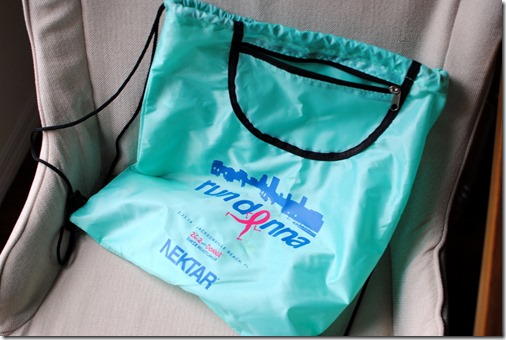 When we looked at the layout of the relay ahead of time, we divided up each leg and I ended up with the first six-mile stretch. (My portion of the race covered the purple and light pink boxes on the map below.) 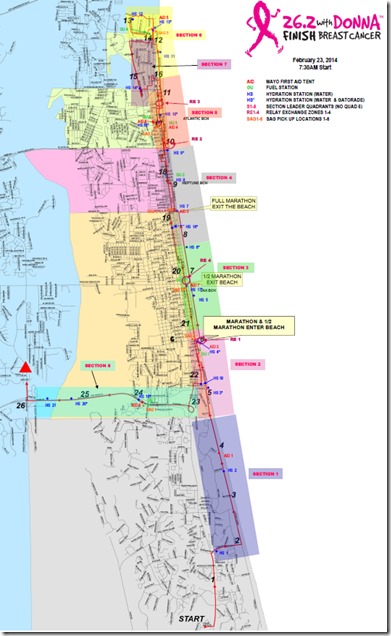 I was really excited to kick off the race and had a feeling it would be energizing and inspiring to be surrounded by so many runners.

Every race participant is given a race bib but they are also provided with an “I’m finishing for…” bib to attach to their back to give a shout out to the person or people who inspired them to run the race. 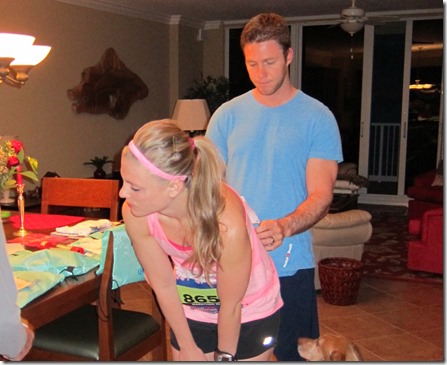 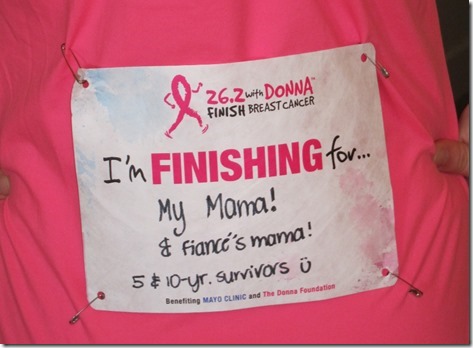 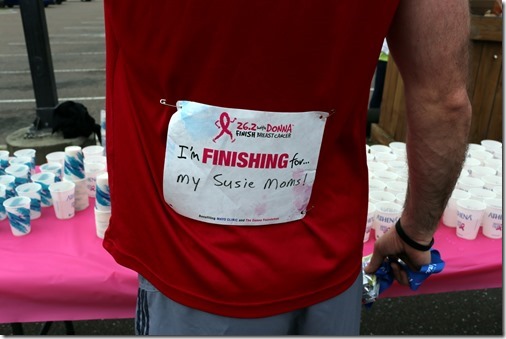 (Ross’ mom and my mom are both named Susan, so I absolutely loved this!)

Seeing the finishing bibs on the backs of runners throughout the course was a constant reminder of the reason why we were all out there running. And I loved seeing the “SURVIVOR” bibs on runners who have personally fought or are currently fighting breast cancer. They are truly incredible.

It seemed like so many of the runners on the course had personal ties to breast cancer and were running this race with a lot of heart and love and a strong hope that a cure for this cancer will one day be found.

The race kicked off a little after 7:30 a.m. and I took off with my baton in hand! 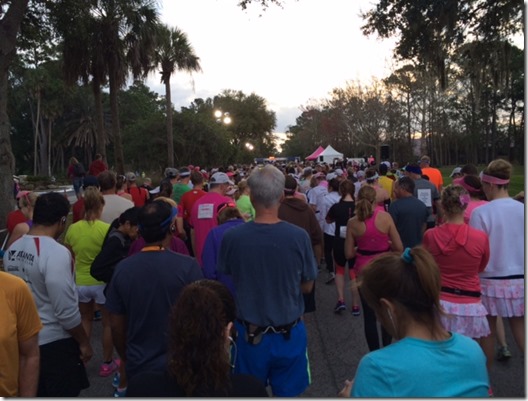 My portion of the race took me through Ponte Vedra and I could not have been more impressed with the crowd support. So many people decorated their houses, set up aid stations with oranges, bananas, water and towels and blasted music or even played their own! 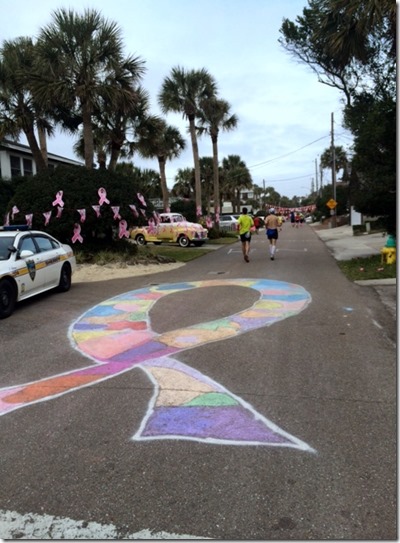 I have never participated in a race with this kind of crowd support and it was incredible! On more than one occasion I thought a person’s front yard was an aid station because they had so much stuff set up for runners. 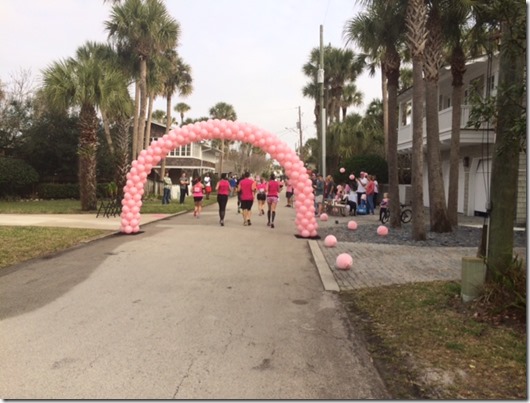 My six miles flew by and before I knew it, I was at the first exchange zone, ready to pass the baton to my sister. 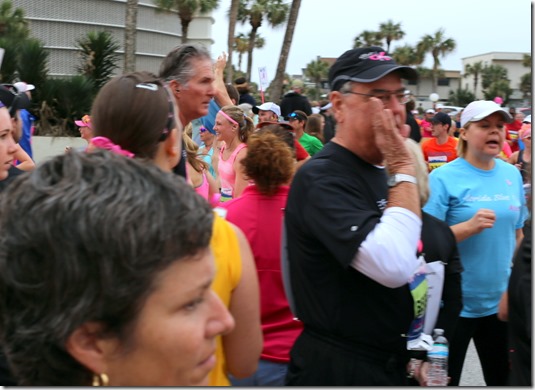 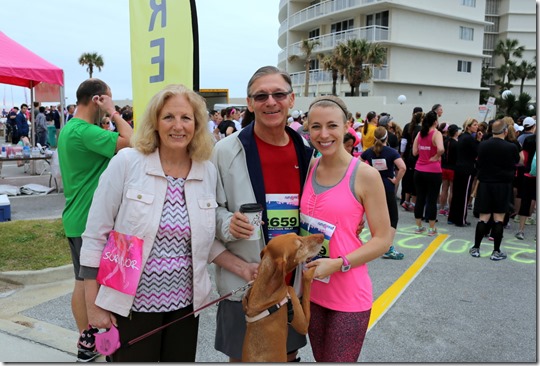 Sadie was such a good little cheerleader!

After I handed Leslie the baton, she took off and I headed over to my family to say hi. Within 20 seconds, I looked around and realized some of the other relay participants I had just been running with continued running with their teammate when they passed the baton to them. When I asked someone working at the race if I could join my sister for her portion of the relay, they said sure, so I took off after her and ended up running her 3.75 mile portion, too! Her portion ended up being a little long (3.9 miles), so my total mileage for the day was 9.9 miles. My hips and quads are sore today, but it was so much fun and I’m already looking for future races to run…

Our third runner of the day was Ryan who had the longest portion of the run to tackle at 6.75 miles. He killed it and increased our average pace by a good bit! 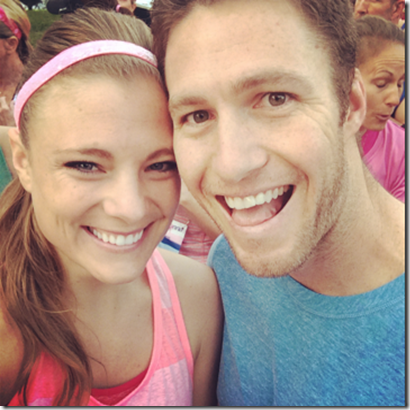 After Ryan, it was Ross’ turn to carry the baton and he ran 3.5 miles and didn’t even seem to break a sweat. Go Ross! 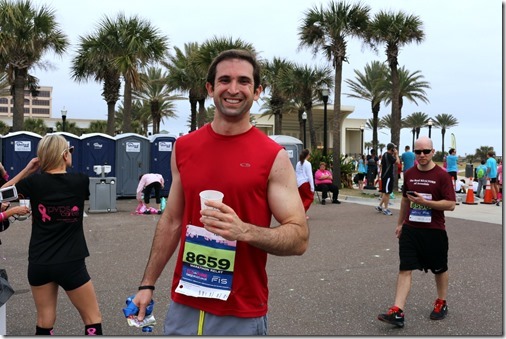 Ross passed the baton off to my dad, our final runner, who had 6.2 miles to conquer. 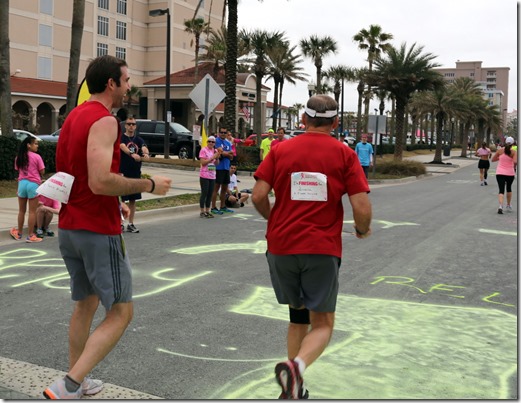 Though Ryan’s leg of the race was the longest, we heard from many people that my dad’s was the hardest since he had to run over a huge bridge before the finish. It also sounds like his portion didn’t include as much crowd support since he was running on a highway that was shut down, but he did incredible and our relay team finished with a time of 4:11:11.

We finished in 39th place (out of 178 relay teams) and were quite pleased with our time! 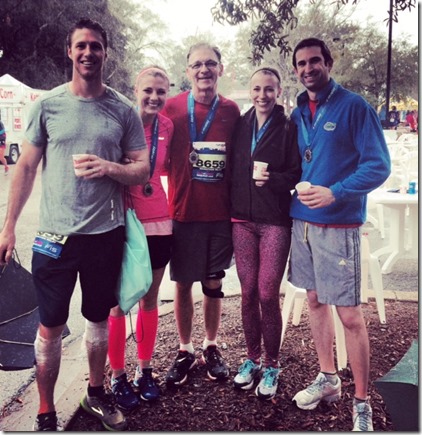 As my dad finished, the weather took a turn for the worse and it started raining. We spent about 40 minutes in the runner’s village and took advantage of the free hot soup, hot dogs and hamburgers, but it was quite chilly and wet and we eventually headed home where we learned that the course had just been shut down due to thunderstorms.

I am so glad we were able to finish but feel awful for the people who trained and were not able to cross the finish line due to weather concerns. I hope they still got a medal!

Yesterday was such a special day and I’m so grateful my dad wanted to do this race because it was a blast. I’d love to do another relay in the future!