Navigation
Hello and Happy Monday to you! I hope you’re stopping by today after a great weekend filled with holiday fun and quality time with loved ones. Our weekend was the perfect combination of active and relaxing.

On Friday night, Ryan attended his first Pure Barre class! My local studio hosted a “Bring On The Men” night and a few of my girlfriends and I brought our husbands. It was unbelievably hilarious and such a great time. I could not stop laughing on more than one occasion, especially because Pure Barre involves a lot of pointing and flexing of the feet and Ryan has flat feet that simply cannot point. We’ve joked about it before, but the class environment made it even more amusing!

Ryan was a great sport and said he has a brand new respect for the workout. He also mentioned that the 60-minute class flew by, which is probably what I love most about the workout. It always passes by in a flash!

Aside from the Friday night barre class, the other big highlight from our weekend was the Girls On The Run 5K!

Girls On The Run 5K 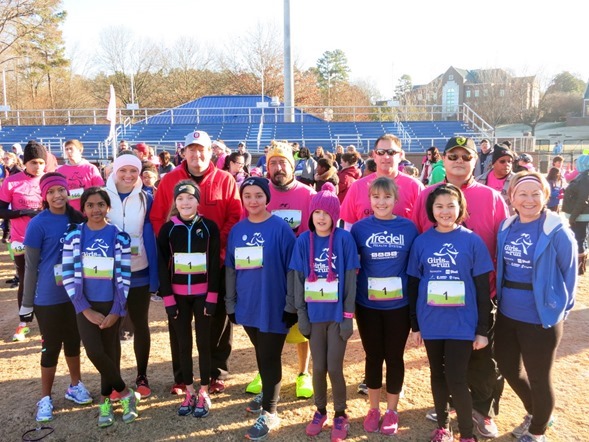 I have so many great things to share from this fun event, so buckle up. It’s time for the official race recap!

I am planning to do a comprehensive post about Girls On The Run (GOTR) and my experience as a coach in a future post, but here’s a quick overview of the program from the GOTR website:

I, along with two awesome co-coaches, coach a team of 6th – 8th grade girls through the Girls On The Run Iredell chapter. 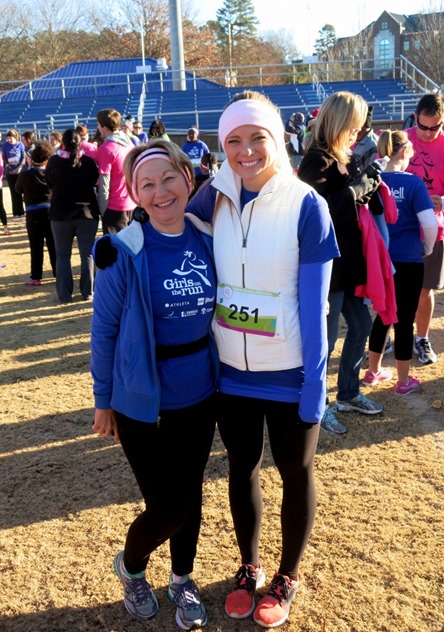 (Me and Coach Rita!)

When I was first assigned to a middle school, I was rather apprehensive and worried the girls wouldn’t get into the program and think parts of it were silly, but I could not have been more wrong. Our girls were open-minded, enthusiastic and all about participating. Thank goodness!! Of course some lessons resonated more than others, but on the whole, we almost always had lively discussions and talkative girls.

After each lesson, we would head outside to the track for the running portion of practice where we slowly built up to a 5K distance. Saturday was the culmination of the girls’ hard work!

The official Girls On The Run 5K! 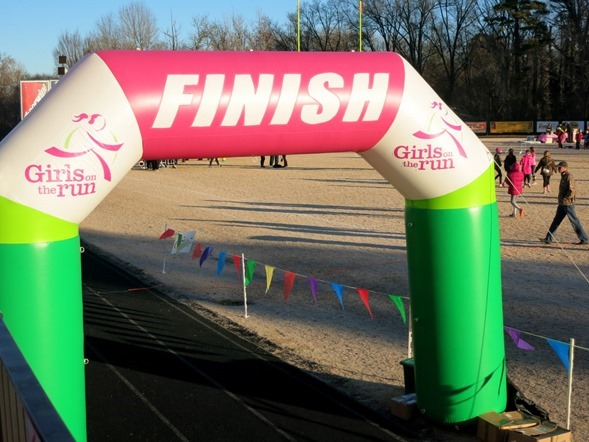 Unfortunately a good portion of our 17 girls couldn’t make it to the 5K (there was a school-related conflict for the 8th graders in band and a few of the girls who play basketball), but the girls who were able to come arrived bubbling over with nervous energy and excitement. 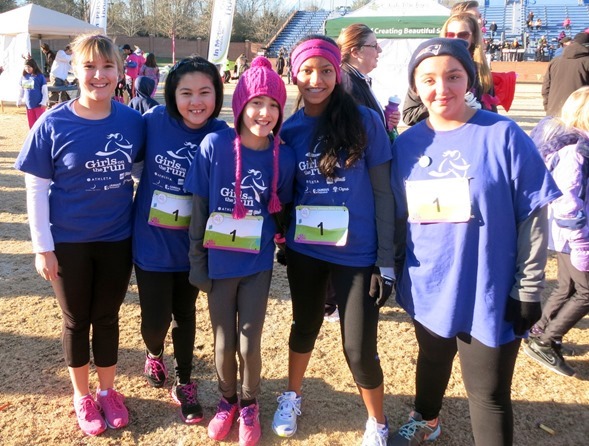 The 5K took place on Saturday morning at Catawba College in Salisbury. It was a chilly 30 degrees when Ryan and I arrived and we spent the 60 minutes or so we had before the start of the race chatting, visiting vendors and meeting the girls’ parents. 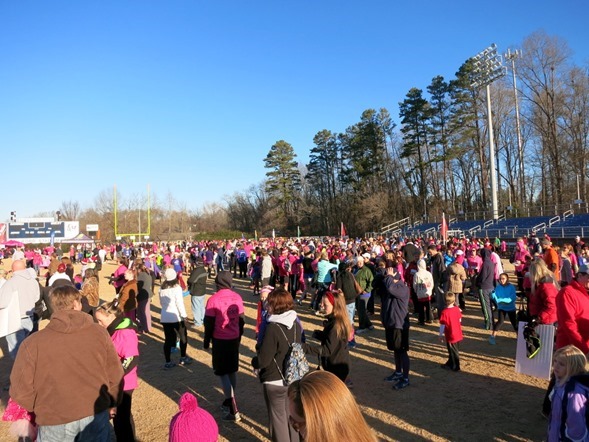 Eventually 9 a.m. rolled around and the kids fun run kicked off after we sang the National Anthem. Then it was time for us to line up! As a coach, you don’t have to run, but you definitely can! You can run on your own or as a “running buddy” for one of the girls on your team or a girl on another team who may need a running buddy. (Every GOTR girl is required to have a running buddy run with them on race day.)

I ended up running with one of our girls, V. 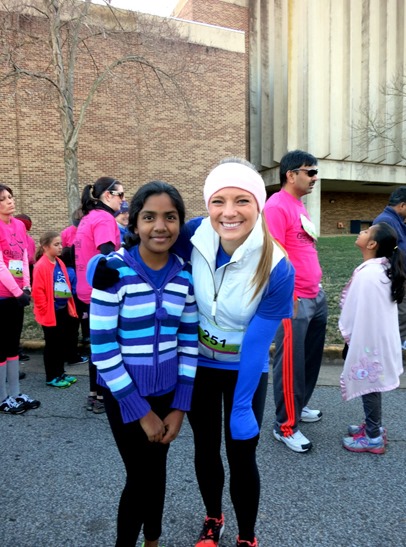 V and I lined up with all of the other girls from our team and their respective running buddies and waited for the horn to signal that it was time to start running! 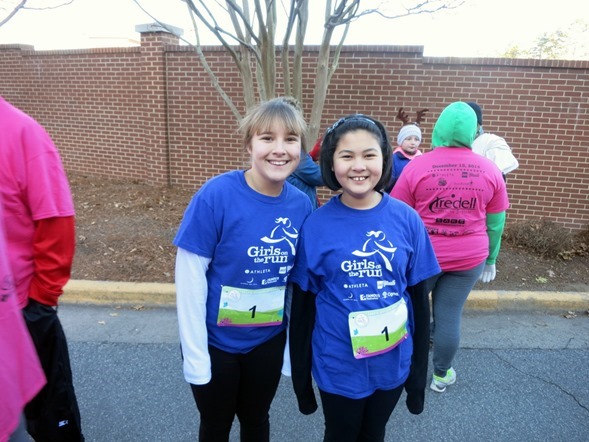 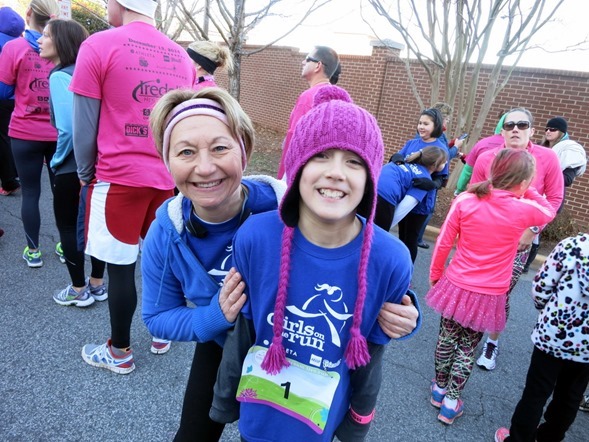 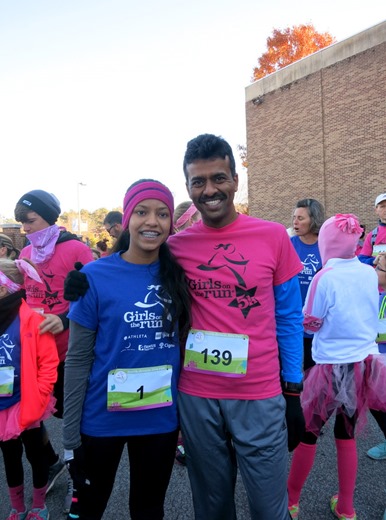 After some excited chatter and a few jumping jacks to keep warm, it was time to go! I told V to tell me if/when she wanted to walk and assured her I was only there to keep her company and run at her pace. She ran a 47:00 practice 5K and wanted to beat her previous time, so that was her main goal.

We talked for most of the race and paused a few times for photos with the mile marker signs (and for a few untied shoelace incidents). 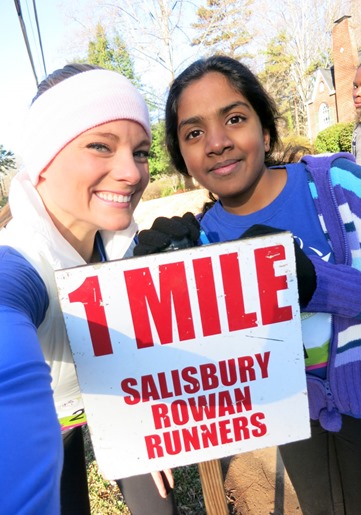 V did a great job and ran most of the first 1.5 miles. We started taking a few walking breaks after that, and her attitude was still very positive! 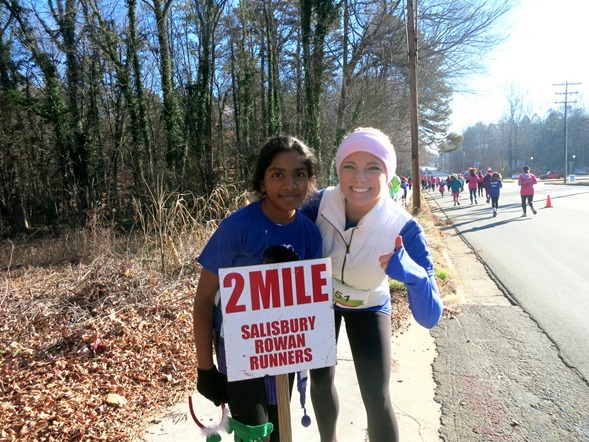 We later found out that as we were running, one of the girls from our team, M, crossed the finish line first out of all the girls running! GOTR is not about how fast you can run (every girl is given a bib with the number “1” on it and there’s no chip timing or awards), but we were still incredibly proud of M for her super-fast time! She came in second last year and really, really wanted to be first this year, so I was thrilled for her and her amazing accomplishment. 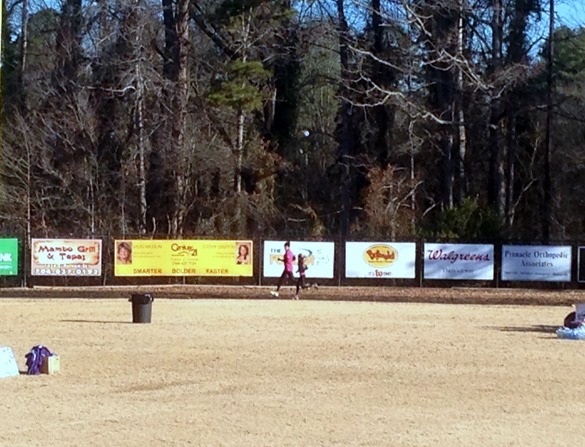 She is seriously crazy fast and Ryan said she finished around 20 minutes. Insane, right!?

One of the coolest things about M and her amazing running ability is hearing her teammates boast for her. They are all so, so proud of her talent and after we were done running, about half of our team came running up to me to tell me that M hit her goal. Such awesome support!

As V and I realized we were almost at the end of the race, I told her we were really close to beating 40 minutes and she said she wanted to run to the end. We ran around the track and through the finish line as the clock hit 40:02! 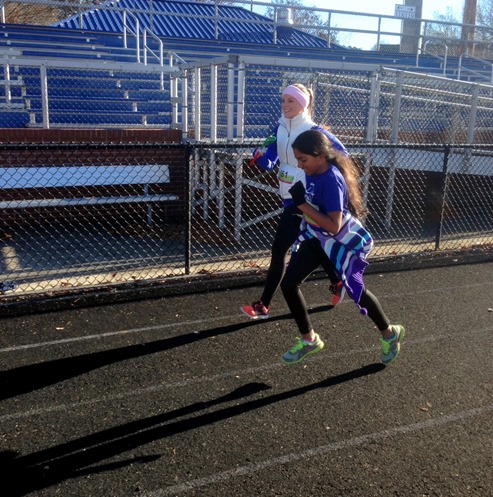 V was ecstatic that she beat her previous 5K time by almost 7 minutes and I loved hearing her chat with her teammates and share her excitement. 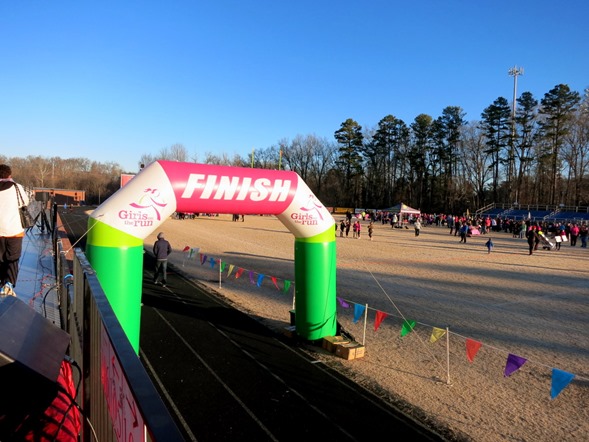 I was so proud of every single girl on our team for finishing the 5K and putting forth such a great effort on race day! It was the perfect ending to my first GOTR season and I truly, truly loved every minute.

And a big congratulations to all of the GOTR girls around the nation who ran in their 5K this weekend! You guys are rockstars!

For those who may be interested in participating in Girls On The Run in some capacity, you may click here to find a chapter near you. I cannot recommend getting involved with this program enough. It’s the best!

Disclaimer: Photo releases are signed by all GOTR girls’ parents and coaches are encouraged by GOTR to share photos to help spread the word about such an amazing organization.