Navigation
The book we selected to read for the PBF Book Club for the month of August was Gone Girl by Gillian Flynn. 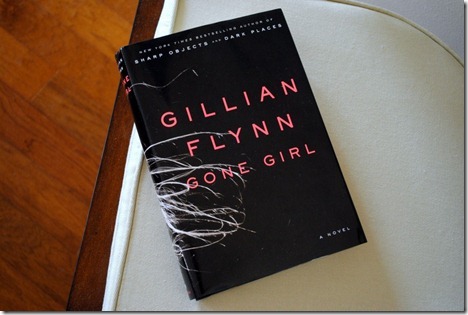 If you’d like to see past book reviews that have popped up on PBF, please check out my Books page. The PBF Amazon Store also features every book that we’ve read through the PBF Book Club for easy browsing!

Alright, now it’s time to discuss this crazy book! Just in case any of you out there are on the fence about reading Gone Girl and don’t want to read my review because it includes major spoilers, let’s just say I couldn’t put it down and think it’s definitely worth a read.

Gone Girl begins on the day Amy Dunne goes missing, which just so happens to coincide with the five year anniversary of her marriage to her husband, Nick. As Amy’s disappearance surfaces, Nick’s reactions are odd and confusing, though he insists he’s innocent.

The book follows Nick and Amy (through past entries in her diary), as police seek to find an answer to the missing person mystery.

It didn’t take me long to get sucked into this book. I was almost immediately captivated and invested in the story.

Who is this Nick guy? Why is he acting so aloof and indifferent about the disappearance of his wife?

That’s not to say I wasn’t completely blindsided by the turning point in the middle of the book. Diary Amy? Real Amy? Two totally different people!? I honestly said, “Oh my gosh!” aloud in bed as I read next to Ryan.

Naturally I then started to hate whack-job Amy, and yet I never really began to like Nick. I think that is a testament to Gillian Flynn’s writing skills. She wrote Gone Girl in a way that made me enjoy reading a book where I wasn’t really rooting for any of the main characters. I was rooting for the truth!

I love a book that sucks you in and makes you want to hop in bed when the sun is still up so you can dive into the pages and Gone Girl definitely had the affect on me.

As for the ending, after talking about this book with some of my girlfriends who read it this month, I know opinions about how this book concluded fall all across the board.

At first, I felt upset. How could Amy get away with murder? And now she’s back with Nick!? I went to bed feeling uneasy about the ending and yet awoke in the morning feeling satisfied with the way the book wrapped up. Two crazies living together forever and ever? Sure! Why not?

While I obviously wanted justice for the man Amy killed, in the end, I could picture Amy and Nick living together in their crazy world for the rest of their lives and somehow making it work.

I just hope they don’t have a bunch of children.

Disclaimer: I edited the last sentence of this post to say “I just hope they don’t have a bunch of children” rather than my initial comment that read “I just hope they don’t have children.” I realize my initial comment confused a bunch of you who read the book who saw that Amy was clearly pregnant at the end and I can absolutely understand why. I honestly meant I hope they didn’t have a bunch of kids and raise them to be crazies like they were. It was supposed to be a quippy little remark, not cause doubt in your minds as to whether or not I read the book we selected for my own blog’s book club. I apologize for any confusion and assure you I read the book.

You can find additional reviews of Gone Girl on the following blogs:

« Cut Out Dress
House Without A Key »