Navigation
I spent the morning researching and writing away and by the time lunch rolled around, I had one thing on my mind. 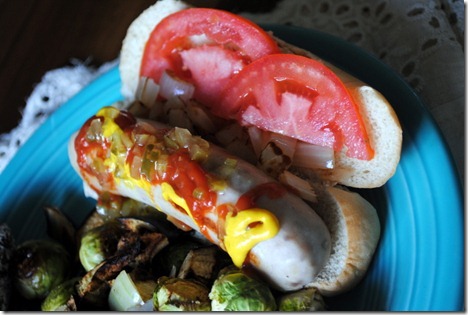 I cooked up an all natural al fresco apple chicken sausage while sautéing an onion and roasting Brussels sprouts and eggplant. 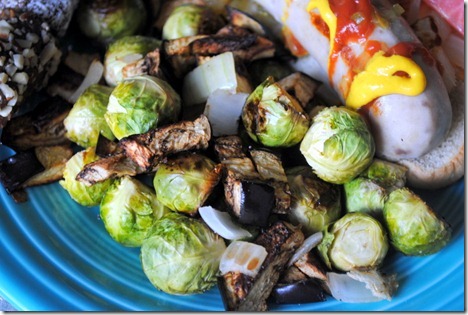 I prepped the Brussels sprouts and eggplant by tossing them in a bit of olive oil and garlic salt before placing them in a 375-degree oven for about 30 minutes. 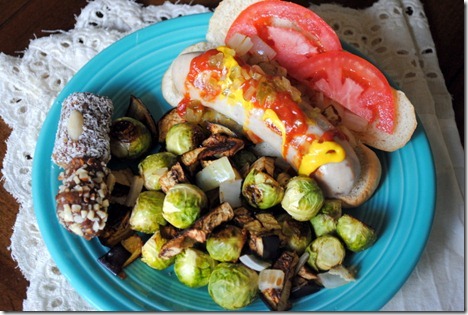 Two Caramel Naturel dates (one rolled in almonds, one in coconut) that I snagged from Saturday’s conference satisfied my sweet tooth!

Now that March is here and we’ve finished discussing February’s book, it’s time to select the book of the month for the March Book Club!

As always, the following books were taken from your recommendations on the PBF Facebook page.

Please vote on the book you would most like to read below. On April 3, I’ll post my review of the book along with discussion questions for us to talk about in the comments section of the post.

Also, if you post a review of the selected book on your blog before April 3, please email me at pbfingers@gmail.com and let me know so I can be sure to include your review in the link up of book reviews that will be included in that post as well.

Your March contenders include… 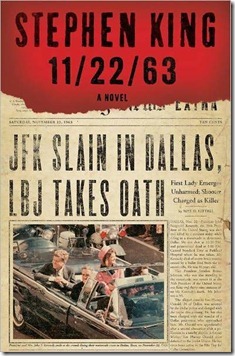 On November 22, 1963, three shots rang out in Dallas, President Kennedy died, and the world changed. What if you could change it back? Stephen King’s heart-stoppingly dramatic new novel is about a man who travels back in time to prevent the JFK assassination—a thousand page tour de force.

Jake Epping is a thirty-five-year-old high school English teacher in Lisbon Falls, Maine, who makes extra money teaching adults in the GED program. He receives an essay from one of the students—a gruesome, harrowing first person story about the night 50 years ago when Harry Dunning’s father came home and killed his mother, his sister, and his brother with a hammer. Harry escaped with a smashed leg, as evidenced by his crooked walk.

Not much later, Jake’s friend Al, who runs the local diner, divulges a secret: his storeroom is a portal to 1958. He enlists Jake on an insane—and insanely possible—mission to try to prevent the Kennedy assassination. So begins Jake’s new life as George Amberson and his new world of Elvis and JFK, of big American cars and sock hops, of a troubled loner named Lee Harvey Oswald and a beautiful high school librarian named Sadie Dunhill, who becomes the love of Jake’s life—a life that transgresses all the normal rules of time. 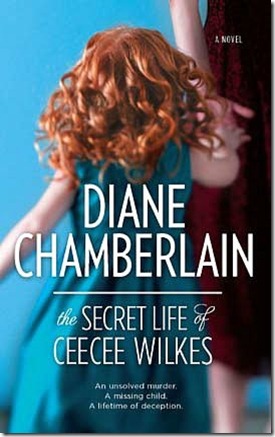 A lifetime of deception.

In 1977, pregnant Genevieve Russell disappeared. Twenty years later, her remains are discovered and Timothy Gleason is charged with murder. But there is no sign of the unborn child.

CeeCee Wilkes knows how Genevieve Russell died, because she was there. And she also knows what happened to the missing infant, because two decades ago she made the devastating choice to raise the baby as her own. Now Timothy Gleason is facing the death penalty, and she has another choice to make. Tell the truth, and destroy her family. Or let an innocent man die in order to protect a lifetime of lies… 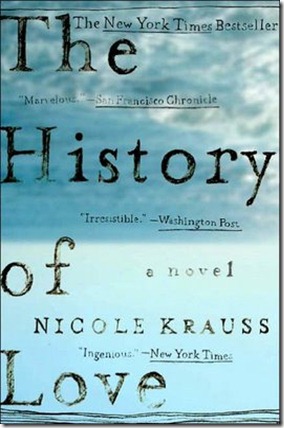 A long-lost book reappears, mysteriously connecting an old man searching for his son and a girl seeking a cure for her widowed mother’s loneliness.

Leo Gursky is just about surviving, tapping his radiator each evening to let his upstairs neighbor know he’s still alive. But life wasn’t always like this: sixty years ago, in the Polish village where he was born, Leo fell in love and wrote a book. And though Leo doesn’t know it, that book survived, inspiring fabulous circumstances, even love.

Fourteen-year-old Alma was named after a character in that very book. And although she has her hands full—keeping track of her brother, Bird (who thinks he might be the Messiah), and taking copious notes on How to Survive in the Wild—she undertakes an adventure to find her namesake and save her family. With consummate, spellbinding skill, Nicole Krauss gradually draws together their stories.

This extraordinary book was inspired by the author’s four grandparents and by a pantheon of authors whose work is haunted by loss—Bruno Schulz, Franz Kafka, Isaac Babel, and more. It is truly a history of love: a tale brimming with laughter, irony, passion, and soaring imaginative power.