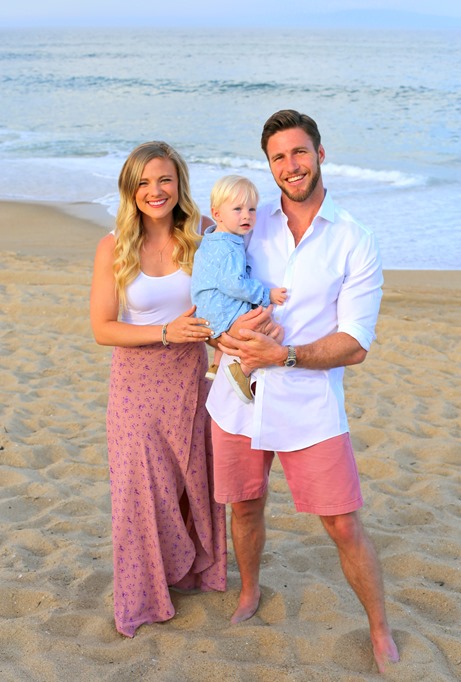 The second day of our family vacation to the Outer Banks of North Carolina kicked off in a very active way! Our family created a private Facebook group to help with the planning of our big weekend getaway and when someone proposed running in the First Flight 5K race (part of the Flying Pirate Half Marathon Weekend that coincided with our trip), a bunch of us (17 in total) jumped at the chance to sneak in a little activity on Saturday morning and registered to participate in the run. 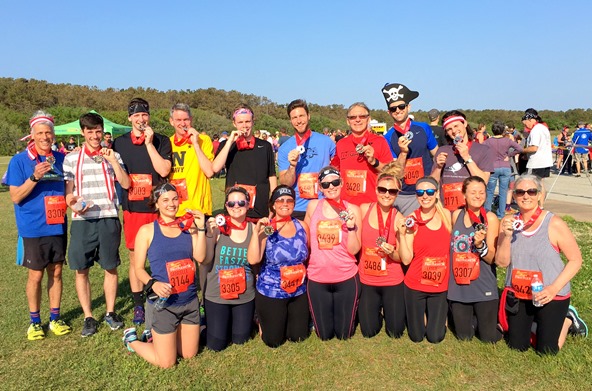 We set our alarms for an hour before the race, downed coffee and toasted bagels and walked about half of a mile from our rental house to the race start at the Wright Brothers National Memorial. 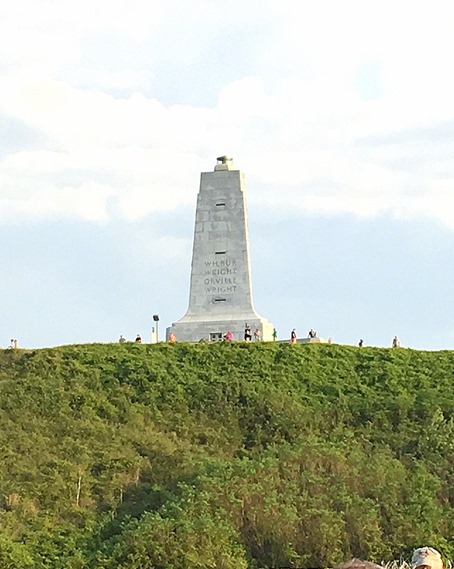 The race began promptly at 7:30 a.m. and our group split up into various corrals depending on our predicted finish times. Ryan and I initially registered to be part of the final corral since we planned to walk the 5K with Chase in our hiking backpack. When my Aunt Laurie enthusiastically offered to hang with Chase at home since she wasn’t planning to participate, we took her up on her kind offer and were excited to be able to run in our first race since Chase was born!

Right before the gun went off to begin the race, the coffee I drank first thing in the morning hit me and I was actually in a portapotty as everyone began running! Thankfully I was able to connect with my mom, dad and sister in the final corral and cross through the start line about 10 minutes after the gun went off. 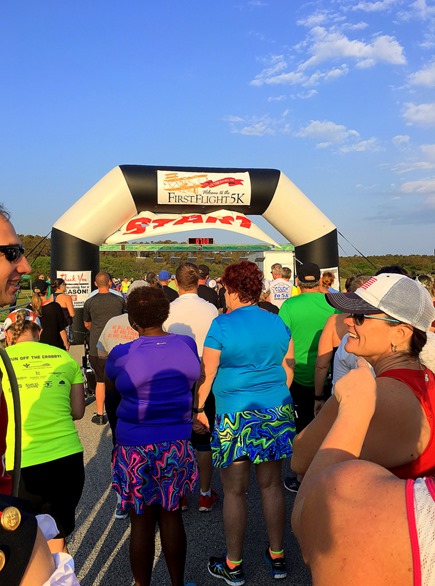 Since I didn’t plan on running, I didn’t bring my earphones or a running watch with me to the Outer Banks, so I ended up running the race technology-free which was actually really, really nice!

Since I haven’t done a 5K in years and most of my running is interval-based rather than a steady state run, I had no idea what to anticipate for my time. The course also didn’t have clocks with mile times at the various mile markers which made me focus more on running at a pace that felt good to me and my body. The course took us around the Wright Brothers National Memorial two times which was great since it allowed me to wave and high five various members of my family as we passed each other along the course. Looking for the 16 other runners from our group as I ran made the race so much fun!!! 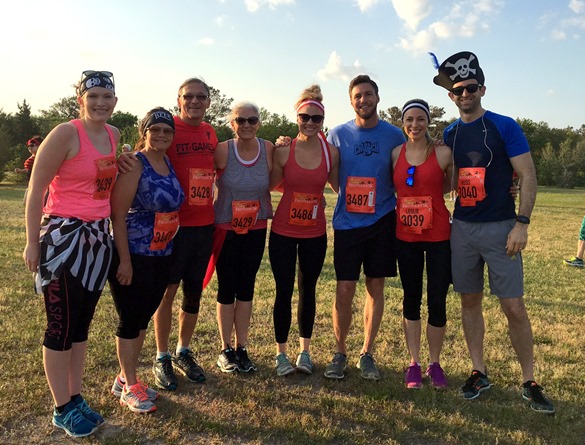 I crossed the finish line with an unofficial time of around 27 minutes and felt great! Finishing the 5K made me remember just how much I used to love running in races and made me feel a little bit of that running itch again. I love my current workouts so much but I’ve always said there’s nothing quite as satisfying as the way I feel after a great run. It’s a different kind of feeling than the feeling I get from other workouts and I think it stems from the fact that I have never felt like I am a naturally good runner. No matter how slow I run or jog, I still feel like running is challenging for me but it’s also the workout that feels the most like an escape for me both mentally and physically.

Once I was done running, I collected my medal, downed a bottle of water and hooked back up with the group of our family members who finished before me. Since a few members from my family were walking the race, a handful of us were able to loop back up with them and walk the last mile together which was really fun! We peeled off before the finish so they could walk through the finish together and collect their medals! 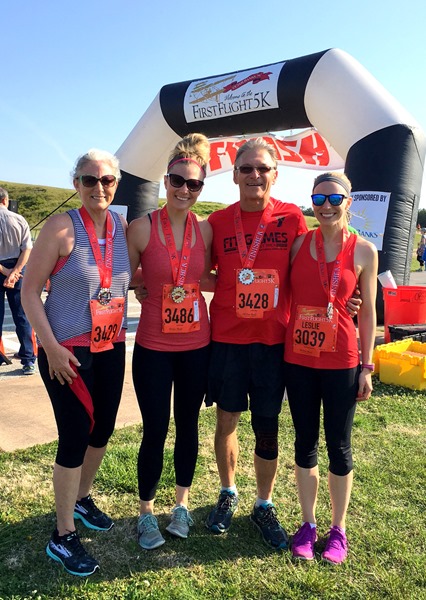 We hung out at the race for a bit so Bob (my mom’s cousin’s husband) could collect a medal for placing third in his age group and walked over to the results tent to check our official times as we waited. Three of us had issues with our times (apparently our chips didn’t register as we crossed the finish and mine was never scanned) so we didn’t get an official race time which was a bummer but none of us cared enough to wait in the long line of people who also seemed to have time-related issues. We decided to stretch in the grass and play airplane instead. Priorities! 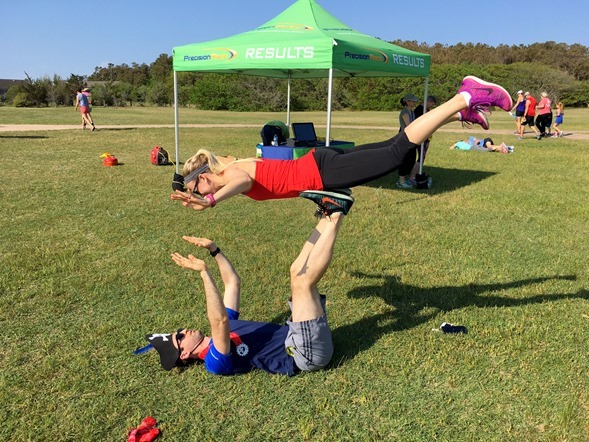 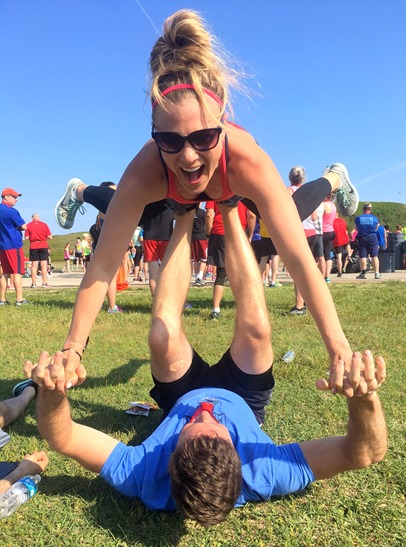 We cheered for Bob as he received his medal before walking back to the house to eat a big breakfast! I made a frittata for the group and we all filled our plates with homemade granola (I NEED to get Jennie’s recipe to share with you guys!), yogurt, scrambled eggs, frittata and fruit. 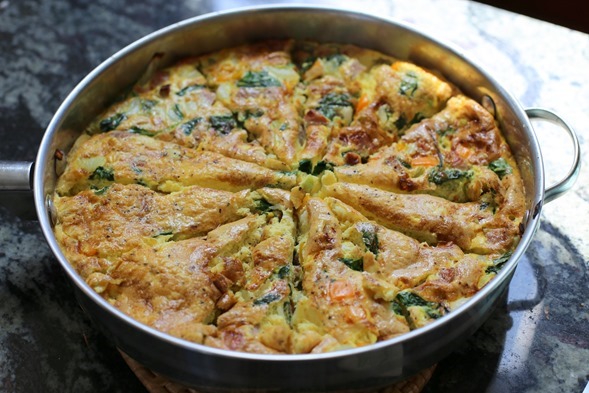 Next up on our agenda was beach time!! We covered our bodies in sunscreen, changed into swimsuits and headed outside for a few hours of beach fun, including bocce ball and spike ball, a new-to-me game that was a HUGE hit with our group. 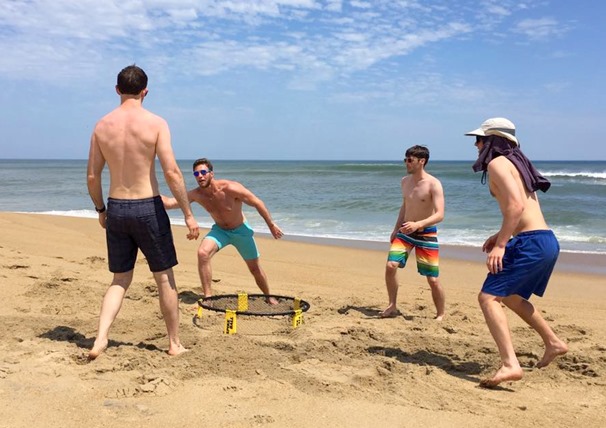 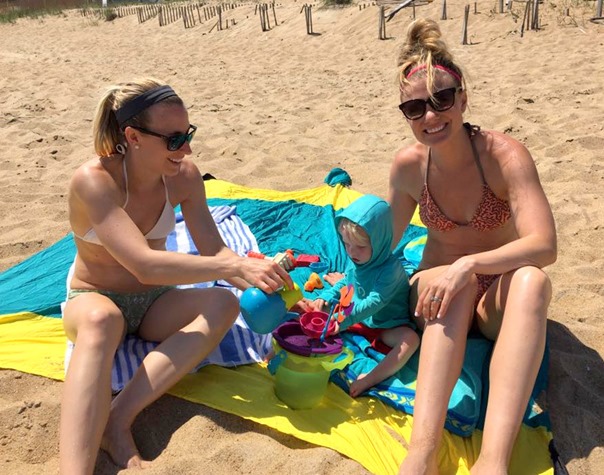 Once Chase was ready for his nap, I headed back to the house with him and spent the rest of his naptime at the pool. Everyone else seemed ready for swimming around the same time and we had an absolute blast playing pool games and judging each other’s splashes in a giant cannonball contest. 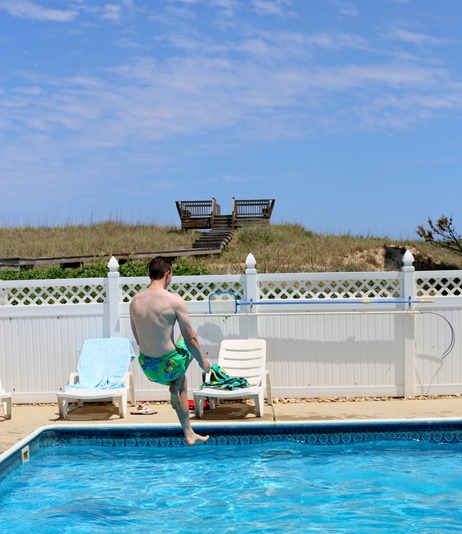 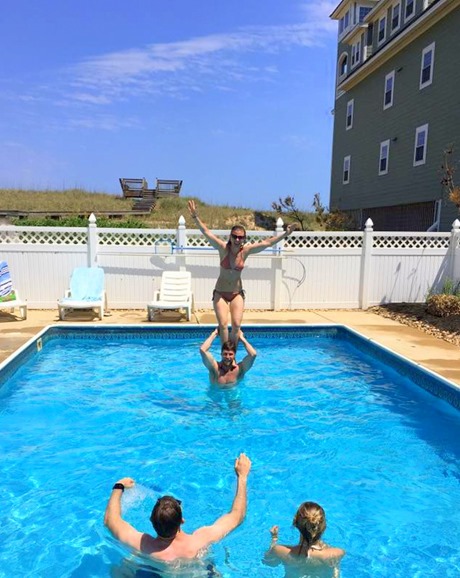 When I looked at the time and realized Chase would likely be waking up soon, I hopped in the shower to freshen up before a small group of us went to get some ice cream and play at the local children’s museum next door.

The museum was the perfect size for a kid Chase’s age – small enough to feel contained but big enough for him to run around and have fun. To be honest, I’m not sure who had more fun at the museum, Chase or me and Ryan! We discovered an indo board and Ryan and I had a great time gliding on it while Chase played. Ryan used to have an indo board at his apartment in college and it took us waaaay back! 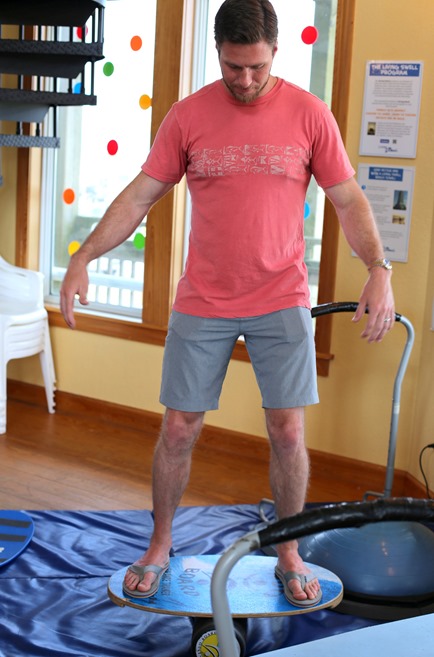 We popped into Big Buck’s for ice cream before heading back to the house to get ready for a big family picture we had on the agenda! 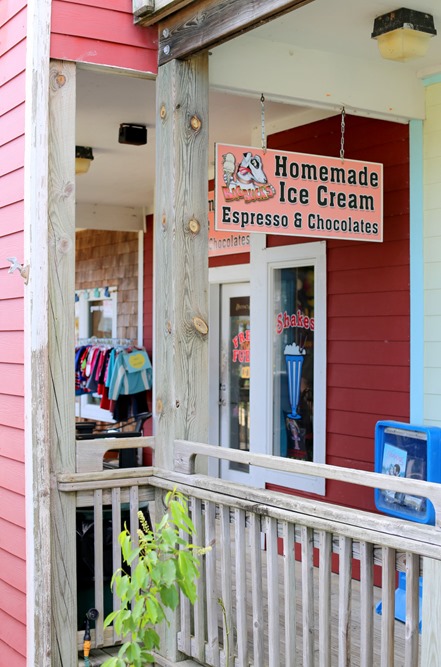 My mom’s cousin Jennie suggested getting all of us together for a family photo during the trip since her daughter-in-law, Amy, is a professional photographer in Raleigh and volunteered to snap a few photos of our gang! 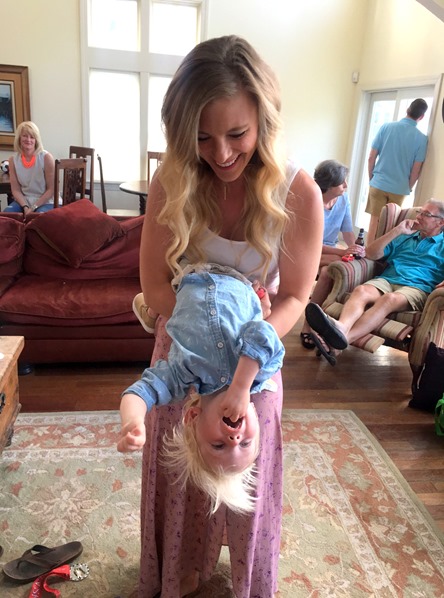 We headed out to the beach around 6 p.m. for photos and I cannot wait to see Amy’s pictures once she has a chance to comb through all of them. Here’s one of the whole gang she sent us as a preview: 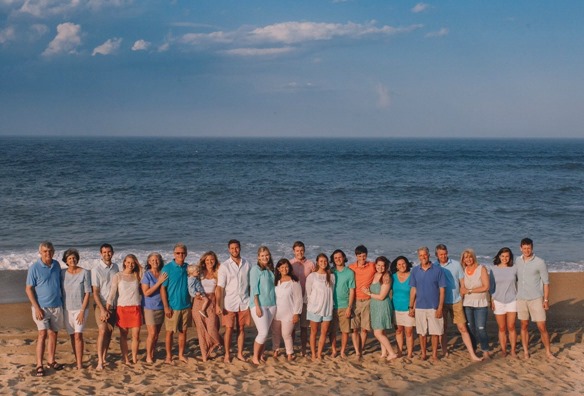 I kind of anticipated such a large group photo being rather stressful (especially with Chase in the mix) but I think Chase actually helped keep things really light hearted with high-fives in between photo snaps and lots of ridiculous cheering. We laughed a lot during the photos and it was a blast! I’ll be sure to share some more from Amy once she passes them along. 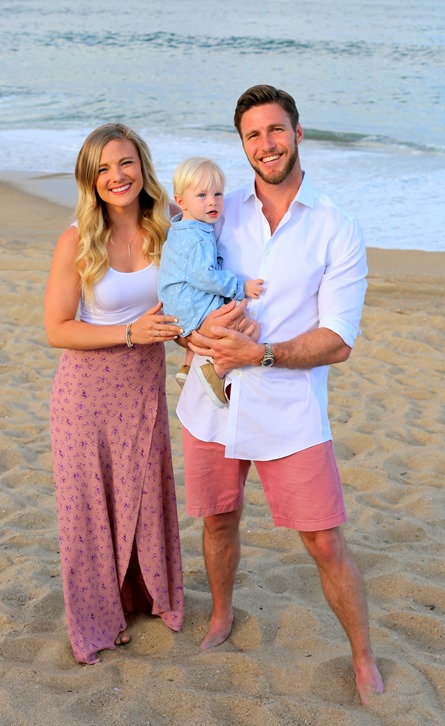 (My sister quickly snapped the above pic of our trio as everyone else was heading out to the beach. Thanks Les!)

After our photo session, we all walked back to the house and promptly changed into comfy clothes! We spent the rest of our final night together sipping on drinks in the adorable glasses Alison made for everyone while we ate dinner and played numerous rounds of Head’s Up using an app on my phone. 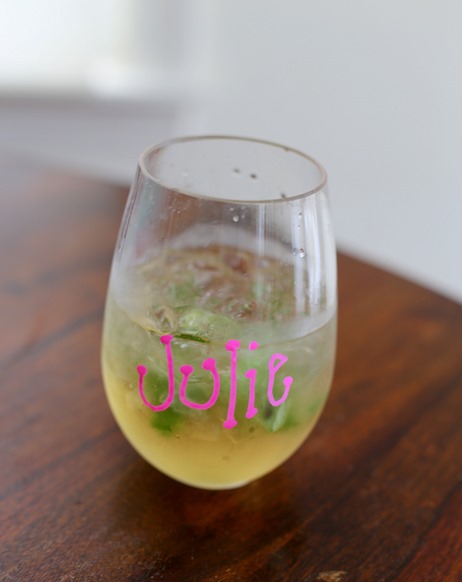 As we left the Outer Banks early on Sunday morning, the rain began to pour and we felt awfully thankful that our trip was filled with sunshine! I feel like we just began to scratch the surface when it come to exploring everything the Outer Banks has to offer. We truly had an incredible time with our family during our short weekend getaway and I really, really hope a trip like this becomes an annual event!