Navigation
Something about hitting six months seemed to mark a change for us for the better. A lot of people talk about surviving the first six weeks with a newborn, but we didn’t really start to see a ton of patterns emerge from Chase until around six months. Though I’ve truly loved these past six months of unpredictability, I feel like I am finally starting to come out of the new baby fog. 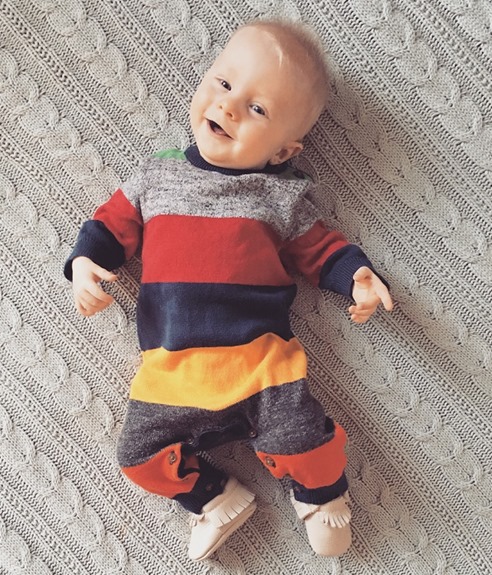 Now, at seven months, Chase has a real bedtime we can count on and he has started sleeping and napping better which is just about the biggest blessing I could ask for, especially as a mom who works from home and really relies on naptime for productivity. Knowing that, for the most part, I will get a 90-minute to 2-hour nap out of Chase in the late morning is SUCH a relief. Afternoon naps are a little less predictable, but he will still usually nap for a while in the afternoon, too, though I try not to depend on a long, uninterrupted nap for work purposes because it can be a little hit or miss.

Even though sleep was a big focus of ours last month, the real fun happens when Chase is awake! 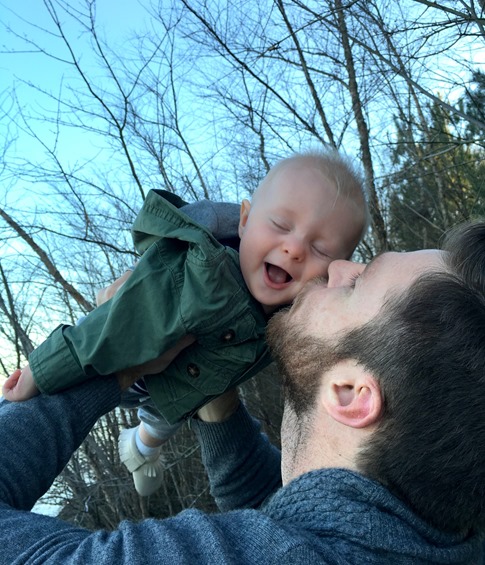 Walking into Chase’s nursery to scoop him up out of his crib when he wakes up has to be one of my favorite things because of his reaction when he sees me approaching him. Chase’s face breaks out in to the biggest smile and he starts kicking his legs and pumping his arms while he makes all of these breathy, high-pitched noises. 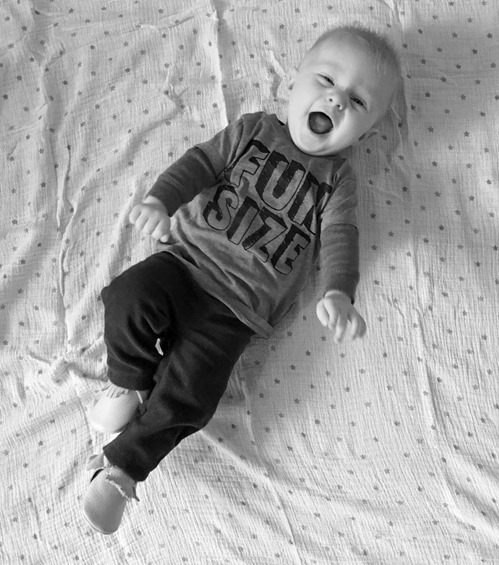 I think we could all learn a thing or two from the way babies and dogs respond to simply seeing their loved ones. It’s pure excitement and it makes my heart soar. It’s truly impossible not to smile back at him when his whole body is reacting in such a joyous way and even during the most challenging days, these moments bring me so much happiness.

Once Chase is up, he is UP and ready for action. Slow-paced activities just don’t cut it for Chase anymore and we spend much of his time playing interactive games or moving from one play spot to the next. 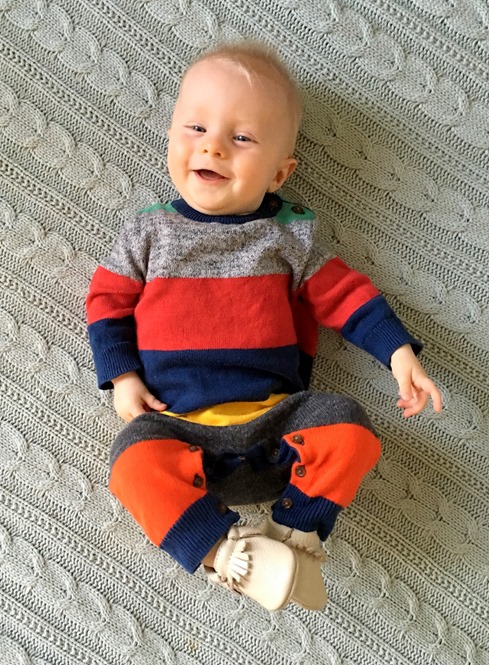 I must give a HUGE shout out to our activity jumper. I swear that thing is the only way I get a free second to do anything when Chase is awake these days. It’s a playtime go-to for us right now and we keep it in front of a large window because Chase loves playing with the toys and looking outside at the birds, squirrels and trees.

I try my best to get out and about and do something fun with Chase every day, whether it be attending a Gymboree class, meeting up with some of my girlfriends for a baby play date or walk outside, attending library story time or a music class, etc. Chase seems to thrive off new experiences and anything different seems to captivate him in the best way. 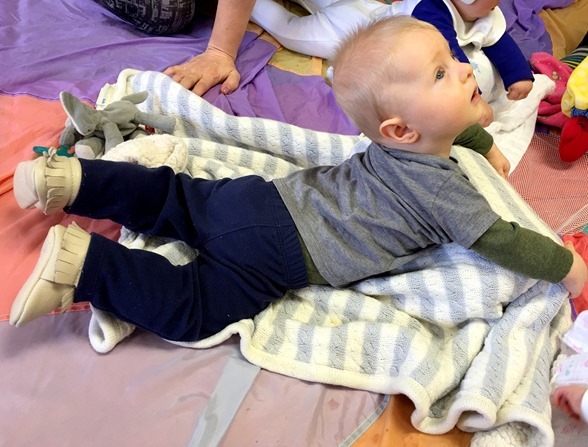 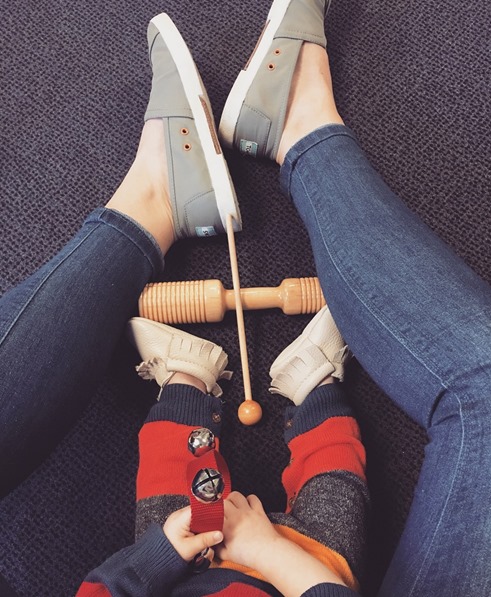 When Chase is up and active, he seems to move a mile a minute… And that’s saying something for a baby who cannot crawl or walk yet! He looooves kicking his legs. He will kick and kick and kick… but prefers to do all of his kicking naked. It seems like the minute his clothes come off, his legs start movin’! It cracks us up and I think I have at least 10 videos of a naked Chase kicking up a storm on my phone. (His best kicks happen in the bathtub with a very serious look of concentration on his face.) 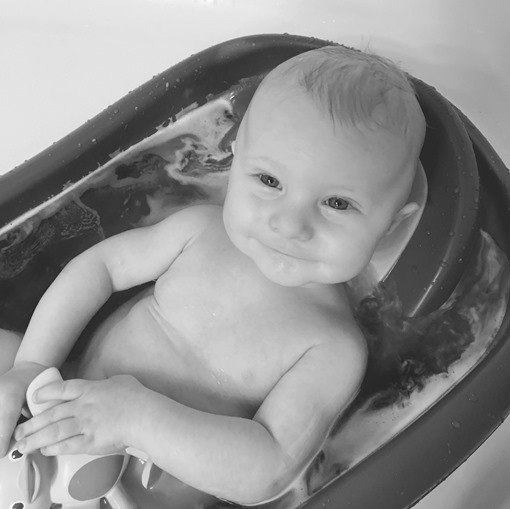 Chase also loves grabbing my face, clicking his tongue, reaching out for Sadie, kicking and reaching for toys on his activity mat and observing anything going on around him when we go outside. Watching Chase explore, play, concentrate, smile and laugh entertain me to no end and bring me such joy. I love this little boy so much that sometimes it truly overwhelms me and makes me feel an odd mix of emotional and vulnerable in a way I never have before. It’s hard to put into words, but I feel like I feel more than I ever have before ever since Chase came into the world.

A week ago, I shared a very long-winded blog post all about our first sleep training experience, so if you happened to miss that one, all of the details related to changing Chase’s sleep patterns may be found in that post.

Since we worked with Chase to try to get him to drop his three middle-of-the-night feedings, sleep has absolutely been better for Chase, but with the exception of one night, I am still not sleeping very well. I wake up all the time and while I think this is very normal (I mean I spent 6+ months getting out of bed three times a night to feed Chase…), I am hoping my mind chills out a bit and lets me sleep soundly in the future. 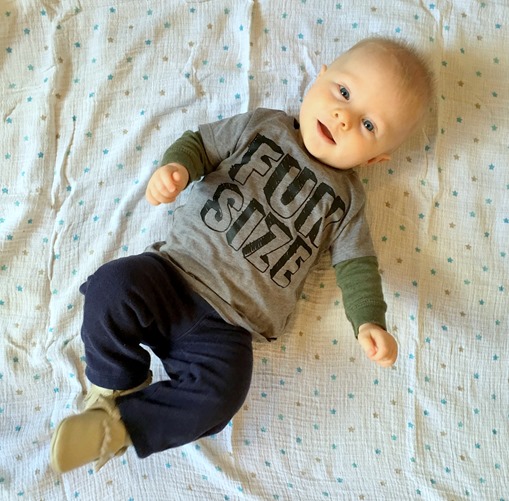 As far as a usual night for Chase, we’ll bathe him and enjoy some quiet time in the evenings beginning around 6 p.m. and he’s usually asleep in his crib before 7 p.m. I’ve been continuing with his 10 p.m. dream feed and am not really sure when I plan to drop it since Chase really does eat a lot when I feed him at 10 p.m. and settles back into a deep sleep the moment I place him back in his crib. I’m leaning on the “if it ain’t broke, don’t fix it” crutch right now…

For the most part, Chase sleeps up until around 4:30 a.m. Sometimes we’ll hear a little peep before then, but it’s usually short (basically just enough to wake me up and keep me awake for another hour while Chase returns to sleep two seconds later…) but there’s something about the 4:30 a.m. time that seems to make Chase stir. He’ll usually fuss for a couple of minutes before finding his Wubbanub and returning to sleep until around 6 a.m. At this time, Chase usually wakes up crying, so I go in to feed him since I’d get him up anytime after 6 a.m., but he’s rarely truly ready to be awake, so I’ll feed him and put him back in his crib until close to 7:30 a.m. when he usually wakes up for the day making happy baby coos! Sometimes this changes and I usually figure Chase will be awake for the day anytime between 6:30 and 7:30 a.m. 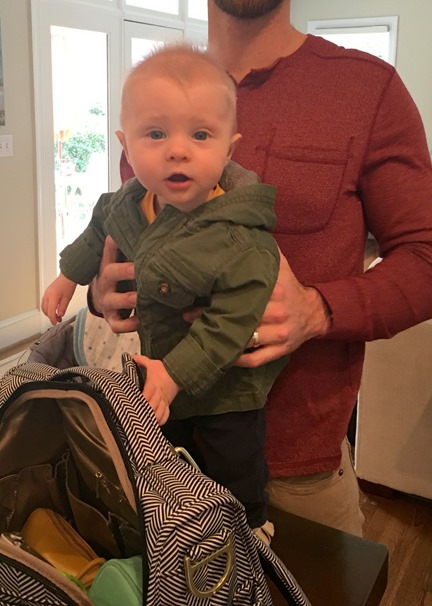 We waited until Chase was six months old to introduce any kind of real food into his diet, but now that we’re introducing solids, things are a lot messier around here! Though we started with a few days of traditional organic rice cereal, we left that behind pretty quickly in favor of vegetables and fruits.

We’re currently doing a bit of baby led weaning paired with traditional purees and I think the variety is working well! Chase definitely eats more when we feed him the purees but he is such a playful and curious little guy that baby led weaning seems to really stimulate him which is so fun to watch. Using the baby led weaning approach, we’ve let Chase try sweet potatoes, broccoli and avocado and the avocado was definitely his favorite! Though it was slippery (and SO messy), he seemed to enjoy gumming all over the strips of avocado we let him hold.

As far as purees are concerned, Chase loves butternut squash. 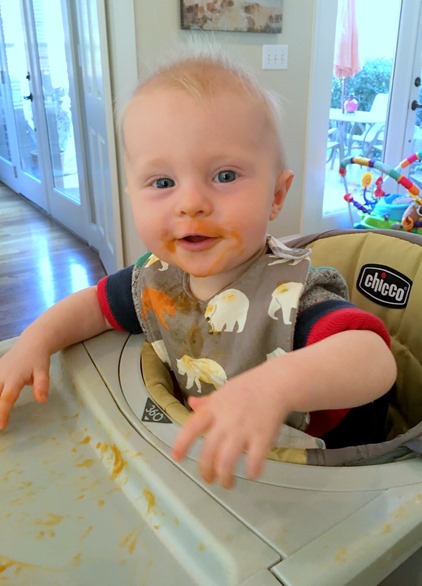 It’s clearly his favorite and watching him learn to open his mouth, anticipate the spoon and actually eat more food than he spits out has been really cool!

Obviously none of the solids we are giving him are replacing breast milk at this time and we’re still relying on nursing for all of his nutritional needs. Breastfeeding is going well and ever since we worked with Chase to drop his three middle-of-the-night feedings, he has been eating much better during the day (much to my relief)!

I’m including this next anecdote for my own memories, but lately when I’ve been nursing Chase, he will take the hand closest to my face and run it across my chest and down my arm over and over again, as though he is petting me. It’s just about the cutest thing in the world and even though he’ll sometimes pause to grab at my face or mouth, it’s a habit of his I hope to remember and cherish forever because it’s so darn sweet. 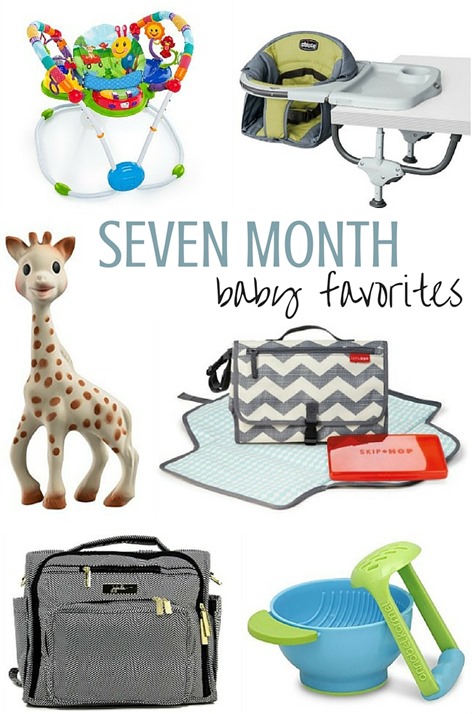 We’ve had some new discovers this month that Chase seems to love and I’ve added extra notes by these items. This list also includes some of our tried and true favorites that continue to be our go-to items for Chase at seven months old. 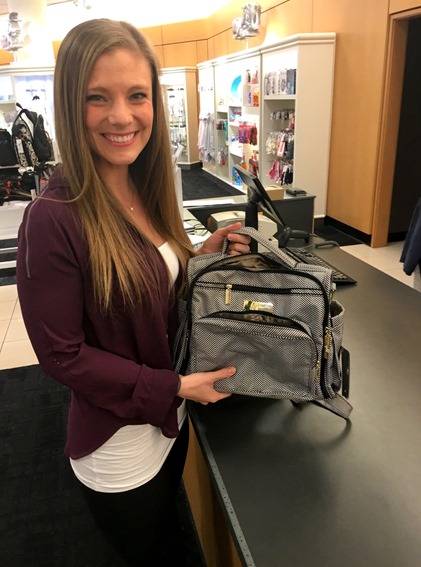