Navigation
When the roads are slick and icy, the decision to stay close to home all weekend long becomes an easy one. The highlight of our Friday and Saturday was, without a doubt lots of playtime in the snow, but let’s back things up a bit and start from the beginning for this weekend recap! 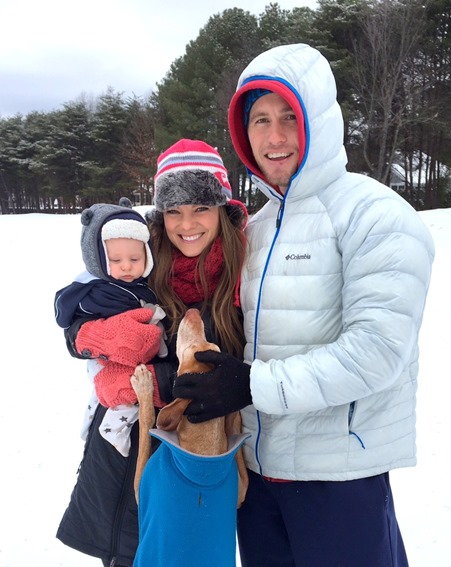 (P.S. See what I’ve been telling you about Chase’s infatuation with Sadie?! He is totally enamored!)

Our Friday morning began with a full house! My mom’s Friday afternoon flight back to Florida was canceled due to the weather and Ryan ended up working from home all day, so things were definitely more fun than they usually are on Fridays in our house!

We awoke to a white winter wonderland and it continued to snow and sleet for much of the day. I only had one thing on my agenda for the morning and that was to attend a surprise baby shower for Morgan, the awesome woman behind the husband/wife duo who own Burn Boot Camp. Morgan planned a client appreciation event for Friday and two of her fellow BBC employees hijacked the event and turned it into a surprise baby shower for her!

Everyone chipped in on several group gifts (she actually registered for the same baby monitor we have and love and that was our main group gift to her) and we filled in her gift table with some individual gifts as well. 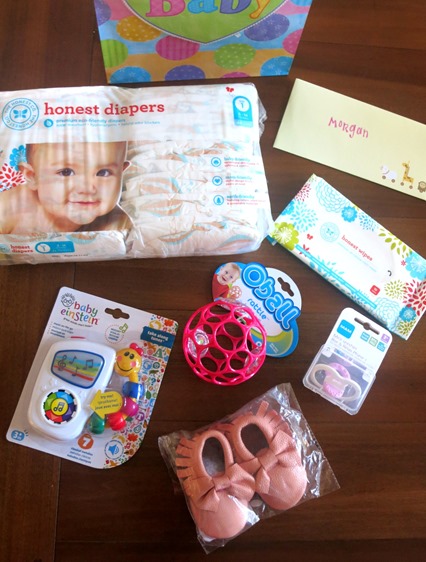 I couldn’t resist giving her some of Chase’s favorite toys that I hope her little girl loves as well. I’m tellin’ ya the Oball and Baby Einstein Musical Toy are two slam dunks in our house!

Despite the inclement weather, Morgan’s surprise shower was well-attended by her BBC clients and I hope she felt all the love coming her way!

The rest of my Friday was spent at home with my mom, Ryan and Chase and when Ryan was able to take a break from work around lunchtime, we bundled up our little man and headed outside for his first snow day! 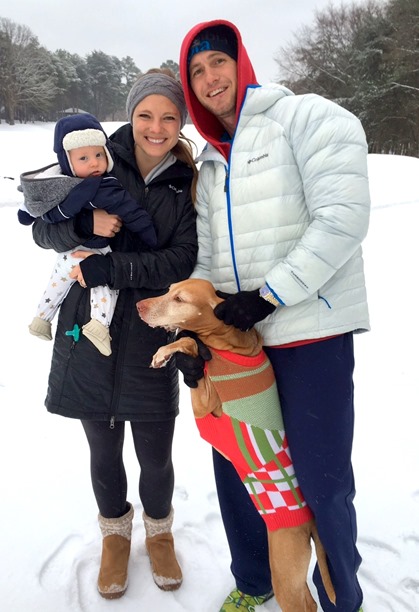 (His snow day outfit was such a random hodgepodge of lots of layers of warm clothing. #FloridaParentFail I will be shopping for a real snowsuit for him ASAP before my trip to Denver!) 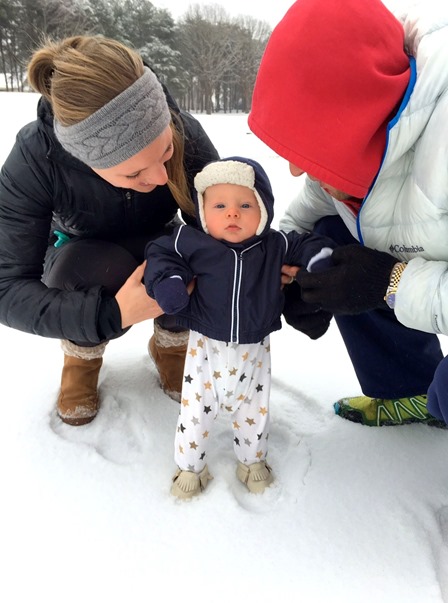 We crossed our fingers that Chase’s first snow day would go better than his first beach day and though I wouldn’t say Chase loved the snow, we didn’t have big fat baby tears surface during our time outside, so I’d say that is a win! 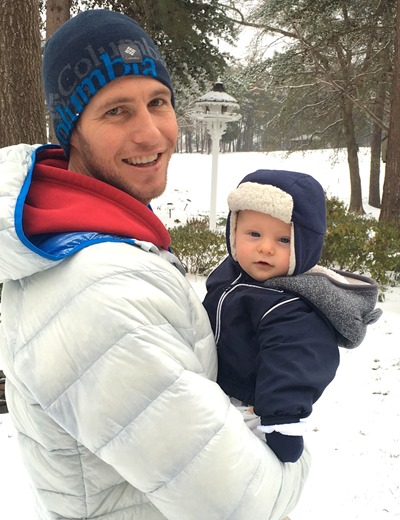 Plus, my mama heart exploded when we saw him all bundled up with pink cheeks and bright eyes! 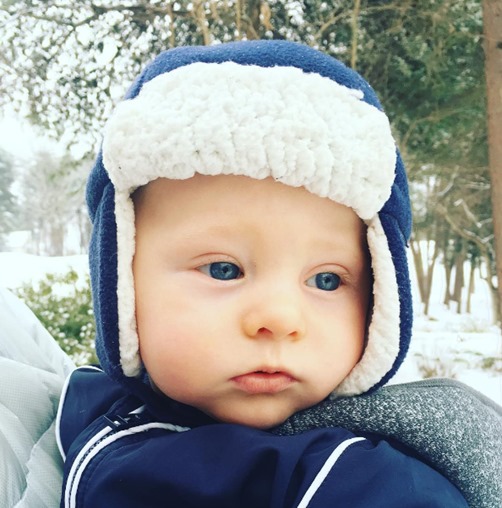 Our snowy experience didn’t last too long but it was still fun to see Chase in his wide-eyed glory taking in the bright white sights around him.

The rest of our Friday night included a crock pot dinner, watching Django Unchained after Chase went to bed and sipping on some homemade hot cocoa on the couch!

Saturday was another snow day, but this one was a bit more adventurous! Since we didn’t have the forethought to purchase a legitimate sled before the snow hit, Ryan decided to fashion us a makeshift sled out of a giant cardboard box, a big garbage bag and some duct tape. 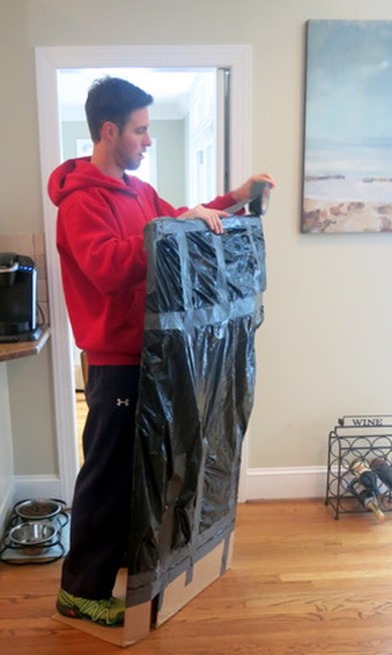 Despite our doubts, his ridiculous sled actually worked… And worked pretty darn well! 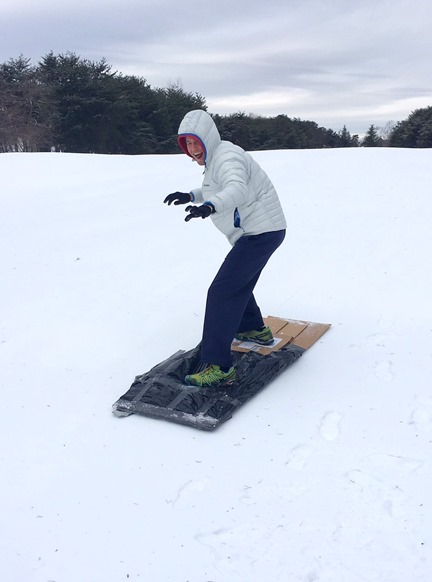 We looked like the world’s most amateur sledders when we joined some people on a nearby hill, but we got a lot of laughs, so at least there’s that! 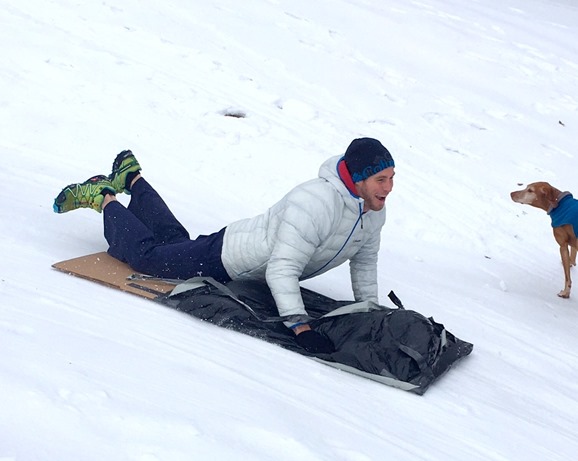 To quote a guy we met while out “sledding” –> “I wasn’t sure whether you two were from North Dakota and found out from years of experience that garbage bags and boxes really DO make the best sleds… Or if you two were from Florida.” (Florida. Definitely Florida.)

Chase and my mom joined us outside for some snowy fun in the beginning before my mom offered to warm him up inside so Ryan and I could get in a few more rounds of sledding before relaxing inside with a delicious mug of hot cocoa. 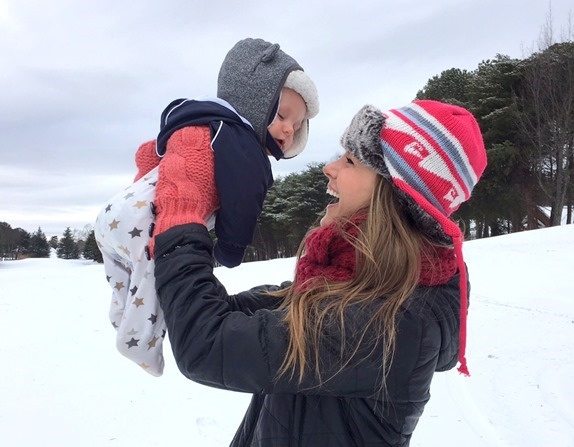 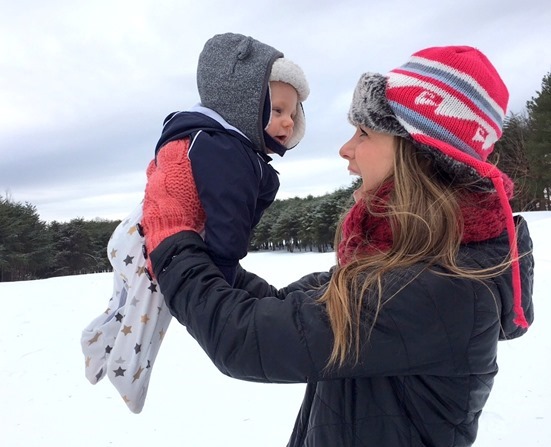 FYI, making hot chocolate from scratch is ridiculously easy and now that we’re out of our favorite Williams-Sonoma hot chocolate, we’ve been simply mixing a cup of Fairlife whole milk (<—the BEST) with 2 tbsp. cocoa, 2 tbsp. sugar and a pinch of salt (per serving) and LOVING it. Simple, creamy and oh so chocolaty. 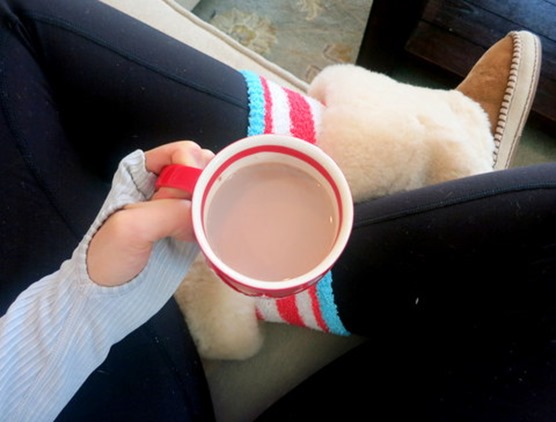 I told Ryan it was basically like a protein drink since the Fairlife milk has 13 grams of protein in one cup. Oh hey healthy lady! Ha!

I’ll be back later in the week with more ramblings from this weekend, but right now I must sign off because we’re off to McAlister’s for dinner before the big Panthers game tonight. (<—I usually write my weekend recaps on Sunday night.)Hoping for a W-I-N!

Have a great Monday, my friends!