Navigation
Good Monday morning to you! How are you guys doing today?

This weekend was a good one for the Fagan family. Friday night kicked off date night for me and Ryan which is always a wonderful way to begin the weekend. Since my mom arrived in town Friday afternoon, we took advantage of her kind offer to watch Chase and Ryan planned a special birthday date for me. We headed out to Sur la Table in Huntersville for a Parisian-themed cooking class!

I tried my best to be a good blogger and brought my real camera with me so I wouldn’t have to rely on my phone for pictures of the evening. Apparently this was not the best idea because I forgot my camera at the store and it hasn’t turned up yet. I’m so bummed but not giving up hope since I left a voicemail with the culinary department and am still waiting to hear back from them.

In the meantime, I don’t have much to show for our date night other than one photo of our finished dinner that I took on my phone and a random 6-second video I originally posted on Snapchat. (<— My username is juliepbfingers) 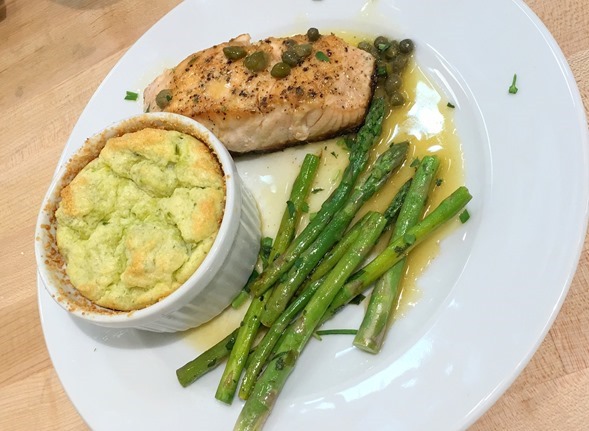 When we arrived at Sur la Table, Ryan headed next door to Whole Foods to buy a bottle of wine for us to share and since it took a while to cook our food (close to three hours), we were both a bit tipsy early on in the night and had a little too much fun. (Maybe this is why I forgot my camera?) We laughed a lot and both agreed we would absolutely love to go back for another class at Sur la Table in the future. It was a blast and the dinner and dessert (an unpictured lemon citron mousse) were both fantastic! (Fun fact: Our head chef competed on The Food Network’s Chopped before! She said it took 18+ hours to film one 30-minute episode and she came in second.)

On Saturday morning, after breakfast and morning playtime with Chase, my mom and I went through a box of my grandmother’s recipes that she brought along with her from my aunt’s house. 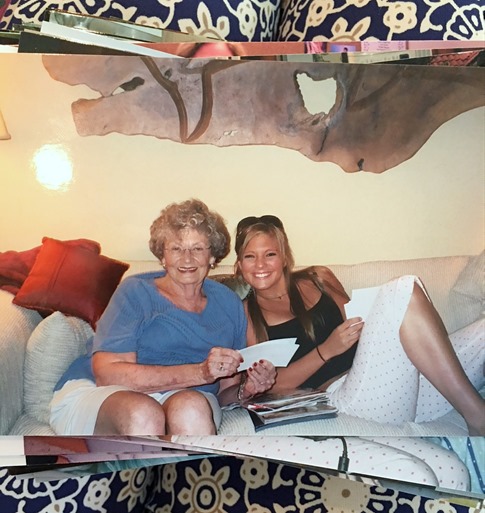 (Throwback photo with Mimi from my freshman year of college!)

It was such a treat to go through Mimi’s recipe box, especially since I’ve always considered her one of the best cooks in the world. She took so much pride in creating amazing meals for her family and I’m not exaggerating when I say we had hundreds of beautifully hand-written recipe cards to sort through. 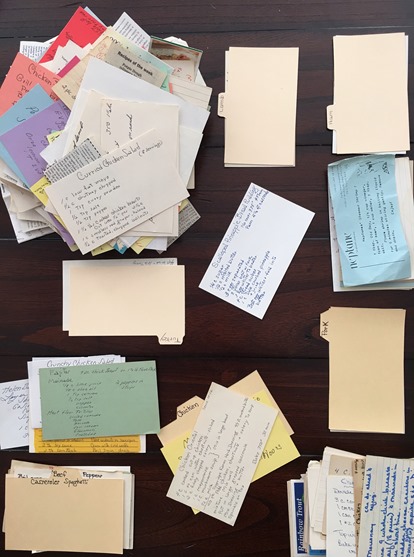 We sifted through the recipes in waves, categorizing them and taking care to keep a bunch of our family favorites or recipes Mimi wrote down that looked particularly tasty. I’m hoping to make a bunch in the future and will definitely share some of the winners with you guys as well!

There was one card my mom found on Sunday that really stuck out to me and made me feel a little emotional. 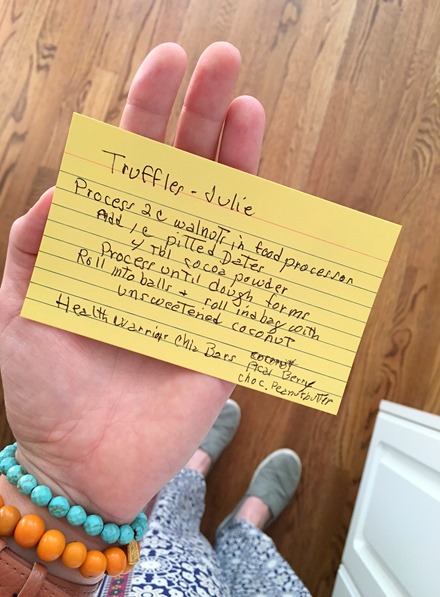 Knowing that my grandma actually took the time to read my blog (she was really good with technology and even texted!) meant a lot to me, but seeing that she wrote down some of my recipes (even when she was no longer cooking) meant the world. I miss you so much, Mimi.

We spent the rest of our Saturday out and about. I was on a mission to find a hat for the Kentucky Derby party my mom and dad are hosting next month and walked away with a teal hat I hope will be a winner. (Just wait until you guys see the outfit I got for Chase. It’s all kinds of obnoxious and fabulous.)

We also ran to the grocery store for some food, picked up a movie to watch from Redbox, had a mini ice cream party and I dabbled in baby food making. 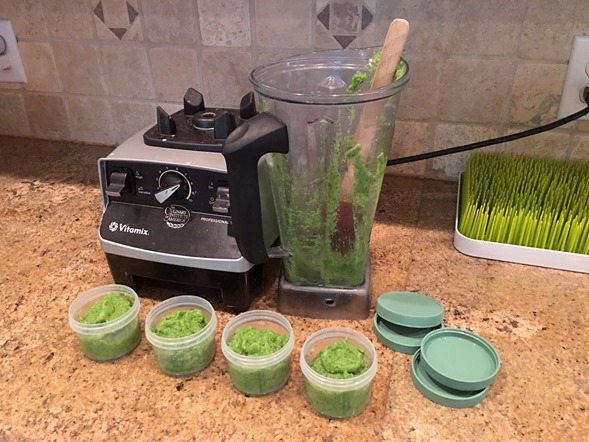 I have yet to let Chase try my homemade concoction (a combination of lots of steamed broccoli and a banana, blended in the Vitamix until smooth), but I hope he likes it! (We’re still flipping back and forth between purees and finger foods right now.)

Sunday was another beautiful day in Charlotte, so Ryan and I made sure to spend a lot of time outside. We went for a 4.5 mile walk with Sadie during Chase’s naptime while my mom was kind enough to watch our little man and it felt so crazy to walk around without a stroller. It’s funny how quickly you adjust to lugging a bunch of stuff with you wherever you go once a baby enters the picture!

After Chase’s nap, the four of us drove to Discovery Place KIDS because I was dying to show my mom and Ryan one of Chase’s favorite playtime destinations. 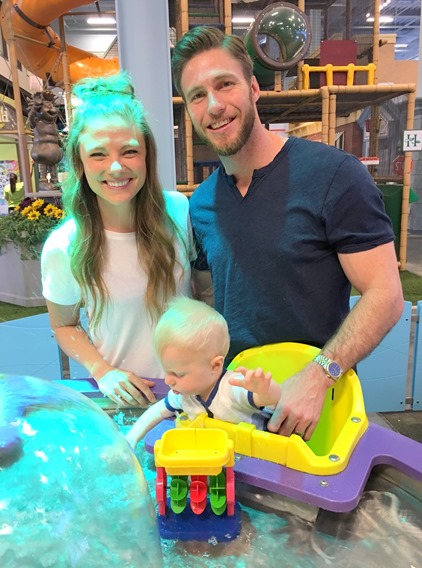 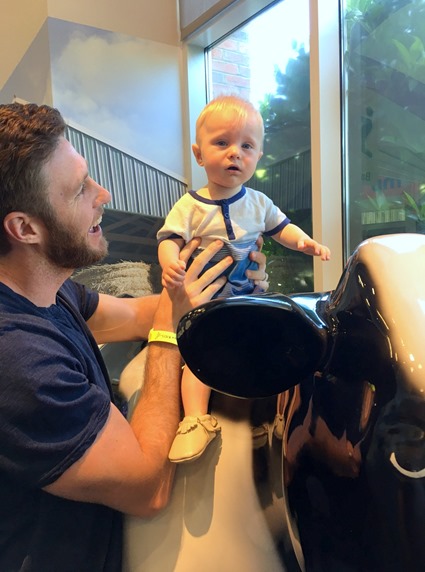 We walked all over the place but spent the most time playing with Legos. 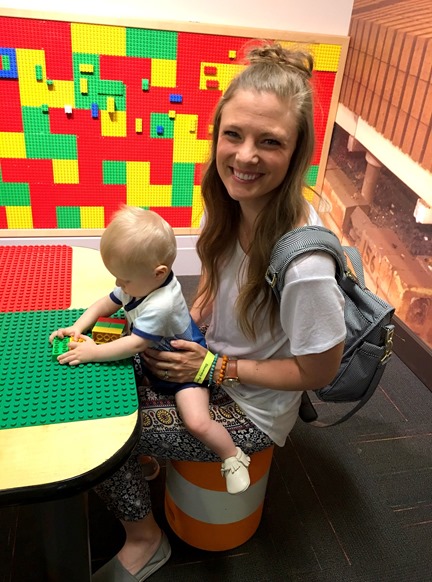 I’m pretty sure Ryan had just as much fun as Chase and he spent some time writing out our names in Legos while we played. 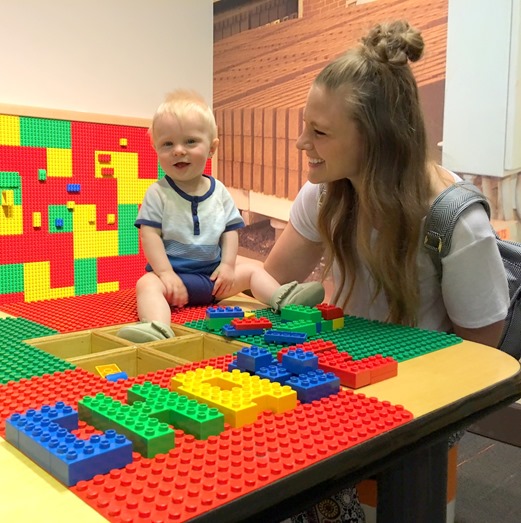 (Note “CHASE” written out in Legos thanks to Dad!)

Eventually we made it back home after stopping for subs for lunch and Chase promptly passed out in his crib for a solid two hours which gave me time to work on this blog post while my mom and Ryan relaxed for a bit!

As for the rest of our Sunday? I’m planning to make a quick trip out to the grocery store before hopefully crawling into bed early tonight. I need to finish The Last Anniversary, but I must admit it’s probably my least favorite of all the Liane Moriarty books I’ve read so far. It’s entertaining but reading this one after Defending Jacob which had me vigorously turning the pages at the end is a little disappointing. I’m hoping my next book selection will be a little better.

I hope you guys have a great week!