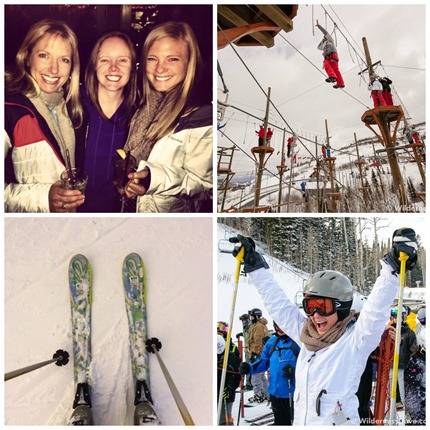 Just in case you’re catching up (or need a memory refresher), here are my previous recap posts:

As you may remember, a trip to Jordan was on the line for the 15 #OmniTen teams competing in the Columbia Sportswear #OmniGames. Once the games were officially over, Rebecca and I knew our chances at winning the amazing trip were very slim and when the final scores were announced last week, we learned that we did not place in the top five and will not be joining Columbia on the trip to Jordan in April. We are super psyched for the winners though and can’t wait to follow their journey!

Though I recapped the #OmniGames competition, I didn’t have a chance to recap our final evening in Park City. 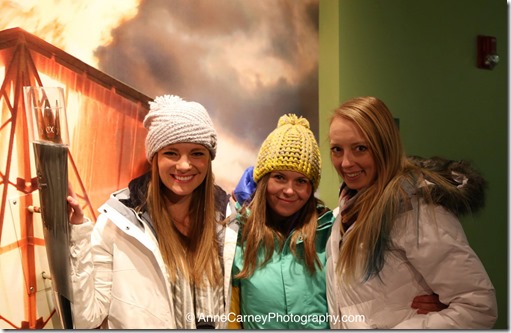 Columbia treated our group to one heck of a cool event that centered around a fashion show and the unveiling of the Olympic uniforms for the United States freestyle ski team. A cocktail hour was set up outside for everyone to enjoy before dinner and after I sipped on a spiked apple cider, I headed inside with Katie and Anne to browse around the Eccles 2002 Olympic Winter Games Museum. 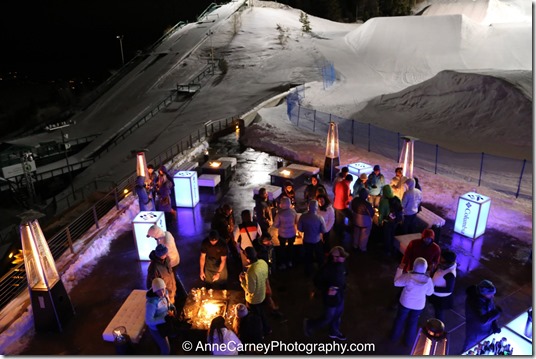 The ability to see real Olympic medals up close was surreal. I cannot imagine how Olympic athletes feel when an Olympic medal is placed around their neck.

When we saw a curling stone on display, Katie and I couldn’t resist picking it up to see just how heavy they really are and were surprised at the weight! 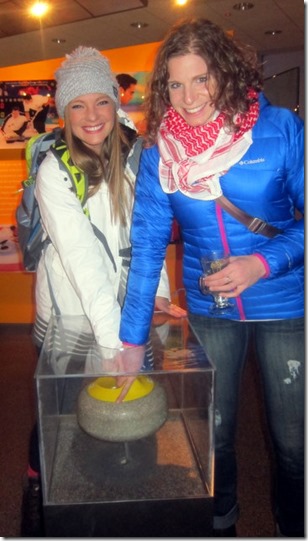 If Katie says it’s heavy, you can believe her because she’s an amazing CrossFit athlete.

Once we were done exploring the museum, everyone was ushered upstairs for a snazzy fashion show featuring fall 2014 Columbia gear and the Olympic uniforms of the United States freestyle ski team. 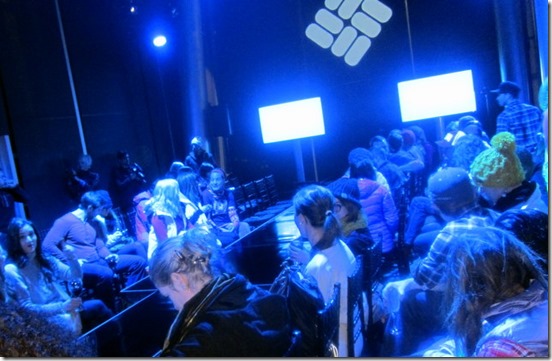 As we walked into the fashion show, I randomly chose a seat next to Deb Criss, one of the lead designers for Columbia, and loved watching the show with her and learning more about what we can expect to see from Columbia. (I said I love fun colors like mint green and was happy to learn that we will see more vibrant color from Columbia in the future!) 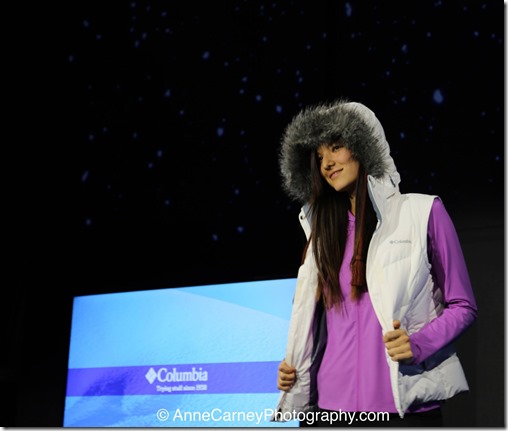 And my favorite ski jacket: 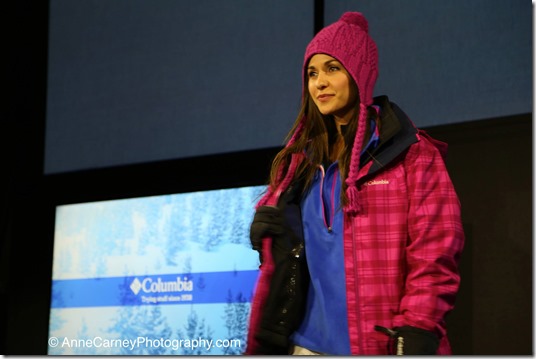 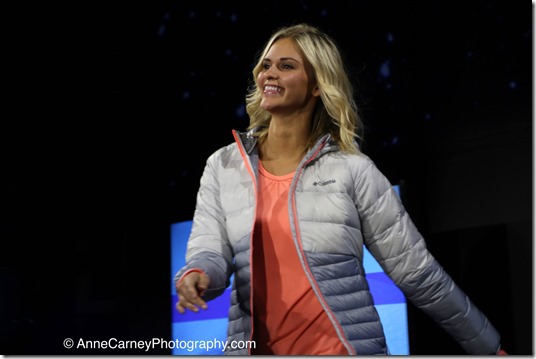 The jacket you see above is Columbia’s latest creation: The TurboDown jacket. When independently tested, the jacket proved to be up to 22 percent warmer than similar jackets and is supposed to be the perfect hybrid between synthetic and down jackets. I was actually most impressed with the weight of the jacket! It’s right around three quarters of a pound and can be bunched up and packed into a suitcase without taking up a ton of space. (Perfect for packing everything into carryon!)

And now for the unveiling of the Olympic uniforms of the United States freestyle ski team: 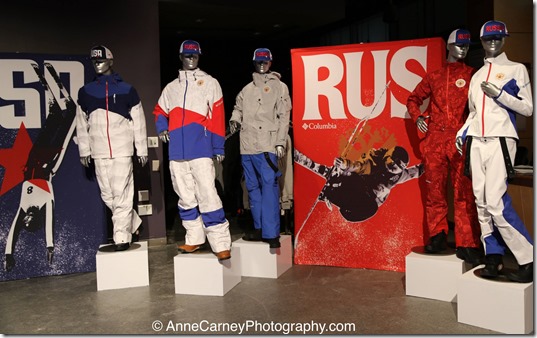 Columbia also designed the Olympic uniforms for Canada and Russia and they all look fabulous. A great combination of functional and attractive!

My favorite part of the uniforms were the patches that Columbia designed for competitors to use as they wish on their uniforms to add some personal flare. (<—Office Space, anyone?) 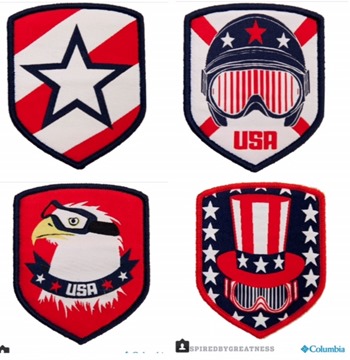 Once the fashion show concluded, we followed the crowd downstairs for a delicious dinner.

I sat next to Caleb Farro, a fantastic skiier and the mastermind behind some amazing GoPro videos, and Justin Lukasavige, one of the members of the team that took first place in the #OmniGames, and loved learning about some of the amazing places they’ve visited and explored. The food was delicious and dessert was enjoyed as we walked around and had the chance to talk with Columbia designers after dinner concluded.

I made sure to take advantage of this time and speak with the designers about some of their sweat-wicking technology (Hello, Florida!) and their trail running shoes since I’ve been doing most of my trail running with Sadie in old running shoes.

And Anne and I had a little fun in a bobsled, too! 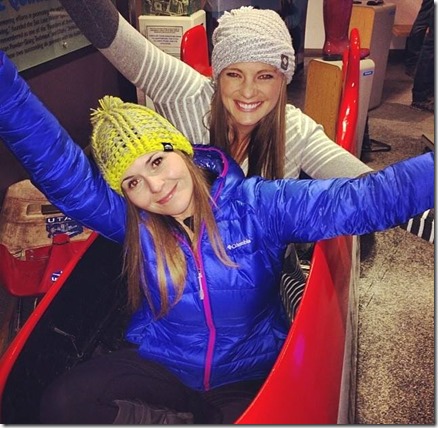 My three days in Park City were absolutely incredible. I met some of the most interesting people, had the best time playing around in the snow and testing winter gear and I am so grateful to Columbia for such a memorable experience.

And to the teams going to Jordan in April: I hope you have the most amazing time and I can’t wait to follow your journey!