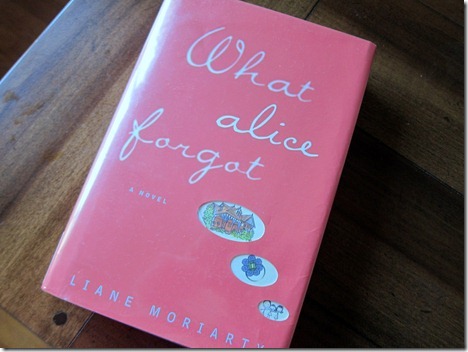 What Alice Forgot follows the life of Alice, a 39-year-old woman who wakes up on the floor of her gym after falling off a spinning bike. Alice awakes in 2008, convinced it’s 10 years earlier. She believes she’s pregnant with her first child and happily married as she was back in 1998. She quickly realizes that she has three children and is in the middle of divorcing her husband. The book follows Alice as she figures out what happened during the last 10 years of her life to make her new life so different than she ever would have imagined.

My Review (With Spoilers)

Within the first 20 pages, What Alice Forgot pulled me in. I longed for Alice to get her memory back and figure out what happened to her marriage. I wanted her to put the pieces back together and discover something that would make everything make sense again. I wanted her to figure out how her once playful and happy marriage ended up in complete disarray.

I really liked the way the author peeled back the details that led to the demise of Alice’s marriage (and her shaky relationship with her sister). It kept me intrigued and guessing, though I never felt like my mind fully went down the path the author was leading me down with her clues. I was never completely shocked when some of the “big reveals” came to light – like the non-affair between Alice’s husband and her best friend – and almost wish the author would’ve done more to make me feel like they were legitimate to lead to a bigger twist. I like to be shocked! The book was definitely long, so I will say that I found myself a little frustrated at times when I felt like the book was dragging and I was ready for Alice to remember more.(This happened mostly toward the beginning of the book before big memories started to come to light.)

One thing that really stuck out to me about this book is just how plausible Alice’s situation is in real life. I married Ryan two years ago, so I feel like we’re still very much in Alice and Nick’s newlywed stage, but even now we have issues within our relationship that need work and constant communication. Alice’s initial disbelief that her relationship could ever end in divorce is something that freaked me out a little bit, as I would assume no one gets married thinking their relationship will not work out. Every marriage requires effort and compromise. I really liked how the author didn’t give one major reason for Alice and Nick’s initial decision to divorce and gradually made it clear that so many little things culminated to cause them to get to the point in their marriage where they felt like it was unsalvageable.

And then we have the ending! Oh happy day!

I loved the ending. I loved the way the author initially made me think Alice and Nick ended up apart. I felt sad about their decision but oddly okay with it. Still, I held onto a glimmer of hope for Alice and Nick, so I was thrilled when the book took that turn in the epilogue and Alice and Nick were together again. Their relationship still wasn’t perfect, but I think that’s the whole point. No one has a perfect marriage.

I cannot end this review without addressing Elisabeth and Frannie! At first I really liked their contributions to the book. Elisabeth’s letters to her therapist provided a lot of insight into Alice’s new life in a creative way which I really enjoyed. Unfortunately as the book continued, I found myself simply wanting to read about Alice and reading through Elisabeth and Frannie’s sections to simply get through them rather than really enjoy their stories. At least I was happy with the way their two stories ended!

You can find additional reviews of What Alice Forgot on the following blogs:

« Getting Active with Old Navy
Five Miles Before Six »