Today’s lesson: Why you shouldn’t work out too hard. 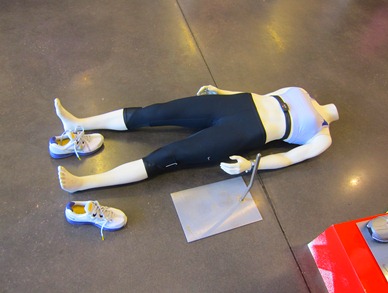 Clearly the mannequin at the Nike Outlet pushed herself a little too hard this morning. I tried to explain to her the importance of rest days in a good workout regimen, but I just wasn’t getting through to her. Maybe it was her lack of ears? Or head?

I’m such a cheeseball.

Ryan and I ran into the overworked mannequin at the Nike Outlet store when we were returning a pair of shorts I bought online early this afternoon.

We also ran into an amazing pair of red, white and blue gym shoes that would be perfect for an American Gladiator. 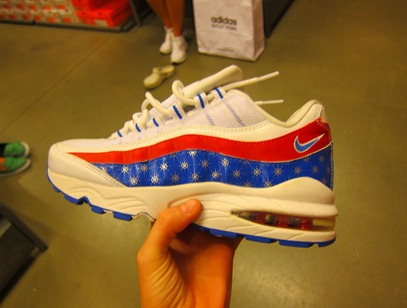 Of course I just had to buy them for with my Fourth of July skort.

While at the outlet mall, we swung by several of my favorite stores including Banana Republic, J. Crew, Aldo and Le Gourmet Chef.

As I was browsing around in J.Crew, I ran into Holly, a blog reader who recognized me and introduced herself. Clearly she has excellent taste in clothes. Hi Holly! Thanks for saying hello… and I’m sorry I was wearing the same thing I wore yesterday and didn’t bother showering after my run. (I took a “washcloth shower” because I knew I was going to shower later and I don’t like to double-shower. Save the planet! And be lazy!) I’m so gross.

While at Le Gourmet Chef, I made sure to sample everything. My favorite sample was the buffalo blue cheese dip. 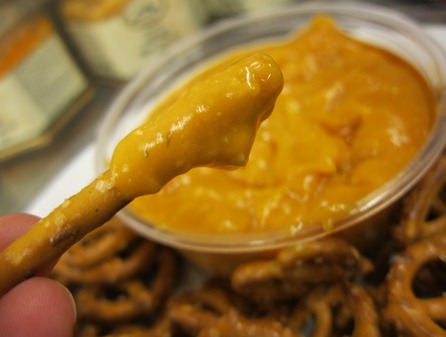 As I sampled the red pepper salsa, I accidentally knocked a jar over and it busted open all over the floor. I blame my purse. I felt so bad, but the women at the store were kind and assured me it wasn’t a big deal.

During our time at the outlet mall, I purchased one thing and one thing only. 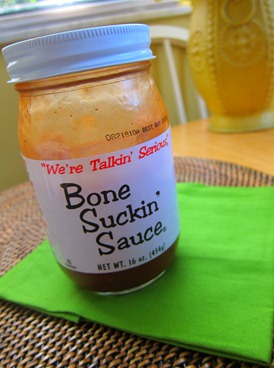 This stuff is amazing. The name “Bone Suckin’ Sauce” made me think it would be spicy, but thanks to the bazillions of free samples provided at Le Gourmet Chef, Ryan and I were able to try it and were instantly smitten.

I fell even more in love with the sauce when I recognized everything on the ingredients list (a rarity for most store-bought BBQ sauces).

Once we arrived home from shopping, it was time for lunch!

Last night we enjoyed pulled pork and had some leftover that I incorporated into our lunch this afternoon. I coated the pork in the Bone Suckin’ Sauce and Ryan and I enjoyed BBQ pulled pork sandwiches with a side of roasted cauliflower. 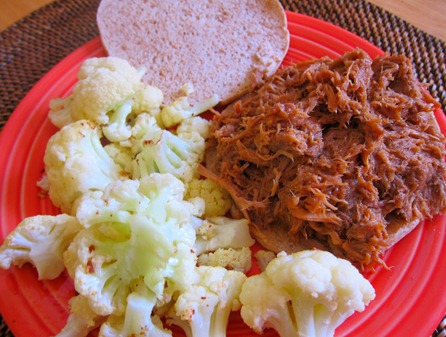 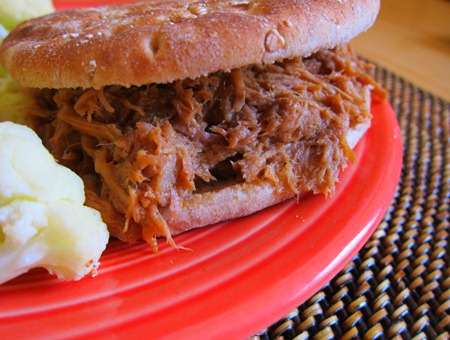 BBQ pulled pork is southern cookin’ at its finest.

Now it’s time to change into my swim suit and get some color on this food baby belly of mine. I also promise to shower before our black tie event tonight.

Hope you’re having a fantastic Saturday!

P.S. Blogger Hope is in the running to win a fairytale wedding at Disney World! She and her fiancé are paying for their wedding themselves and could really use our help. All you have to do is click here to vote. Think of it as your good deed for the day!