This morning I ran my fourth half marathon! 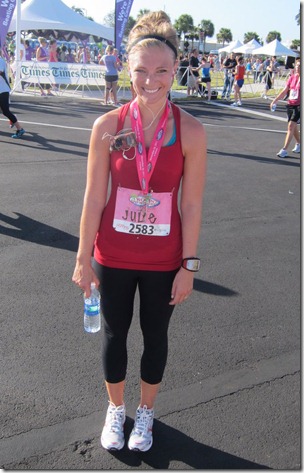 I finished the Women’s Half Marathon, but it wasn’t pretty.

I awoke at 5:50 a.m. and ate a Luna bar (my usual pre-race breakfast) and bowl of oatmeal. (I normally try to keep my pre-race meals on the smaller side because I cramp up so easily and paid for eating that bowl of oatmeal around mile two when I cramped up a bit! Luckily the cramp didn’t last long and I breathed my way through it, feeling better within five minutes.)

My sister, Leslie, was  signed up for the 5K, so my mom and Ryan dropped us off at the start line about 10 minutes before the scheduled start. (My dad couldn’t make it to cheer us on because he had an early morning flight to catch to Arkansas.)

Leslie walked me to my corral as they were singing the Star Spangled Banner and we exchanged hugs and wished each other luck on our respective races. I had about five minutes of time to kill once I entered my corral and felt my nerves start kicking in.

When the race kicked off, it was relatively congested for the first mile, but I saw my mom and Ryan cheering! 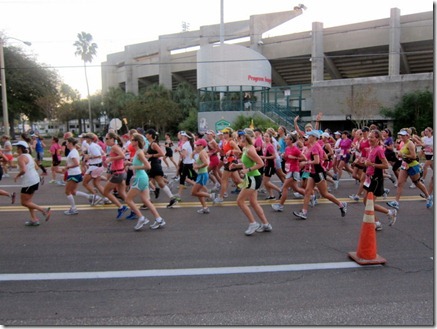 See those two hands waving in the air? That’s me!

Almost immediately I saw the 2:00 pace group and decided to stick with them for as long as I could, thinking I might have another sub-two hour half marathon in me. Their energy was awesome!

The first few miles of the race were absolutely gorgeous. We ran past the historic Vinoy hotel, along the water and through some nice neighborhoods. I passed the 5K mark at 27:00.

I started to feel the humidity and heat getting to me around the fifth mile and was sweating like a beast. It was around then that I saw the best sign of the day that read, “That’s not sweat! That’s your fat cells crying!”

I took some Gu Chomps at mile five and kept on trucking, averaging around a nine-minute mile pace.

When we ran back the way we came and toward the pier around mile eight, I felt very overheated and changed my goal from finishing in under two hours to simply running the whole race.

I saw my mom, Leslie and Ryan at the pier and told them I was so freaking hot! Ryan said he knew that was the moment when I decided to let the two hour pace group out of my sight and he was absolutely right. 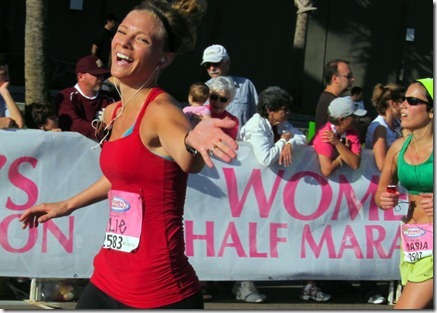 Don’t be fooled by the smile. Focus on my red face and sweaty forehead to know how I was really feeling.

Miles eight to 11 were definitely the hardest for me. We ran along a road with absolutely no shade and I saw so many people stop to walk and even passed a handful of runners from the 1:45 pace group who I heard complaining about the heat and humidity. I’m not gonna lie, it made me feel better to know that I wasn’t the only one so affected by the humidity.

Toward the end of the race, the runners ran inside Tropicana Field (where the Tampa Bay Rays play baseball!) and around the perimeter of the field. That was pretty badass!

I was so happy when I saw the mile marker for the twelfth mile and kept on truckin’, grateful for the spectators who saw my name on my race bib and yelled out encouraging words.

I felt a little discouraged when my Garmin reached 13.1 miles, but I was still a good distance from the finish line. I must’ve run along the outside of the course a lot because when I looked down at my Garmin after I ran through the finish line, I ran a little less than a quarter of a mile more than the half marathon distance. 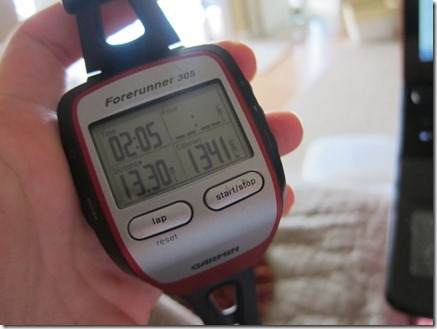 Once I crossed the finish line, I chugged a bottle of water, but all of the food and flavored beverages repulsed me at the time.

We took a couple of photos but didn’t hang out for too long because I just wanted to get home to lie down. 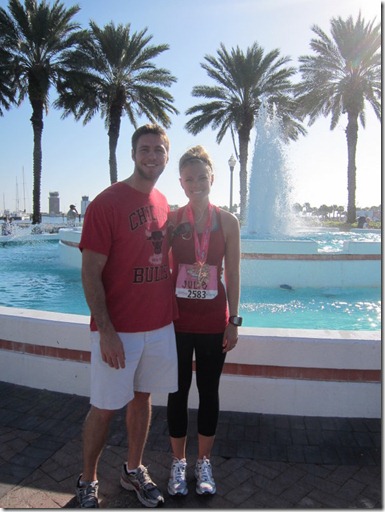 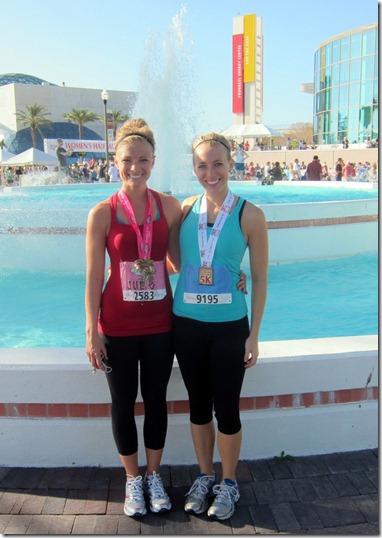 My sister had an amazing 5K race! Her goal was to finish in under 30 minutes and she killed it! Her official time was 27:57. So excited for her! 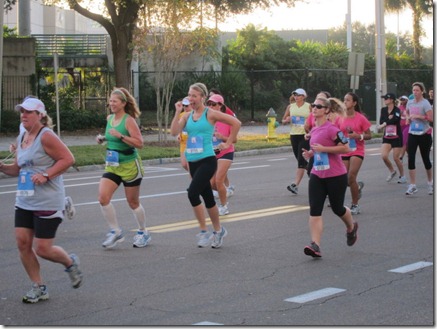 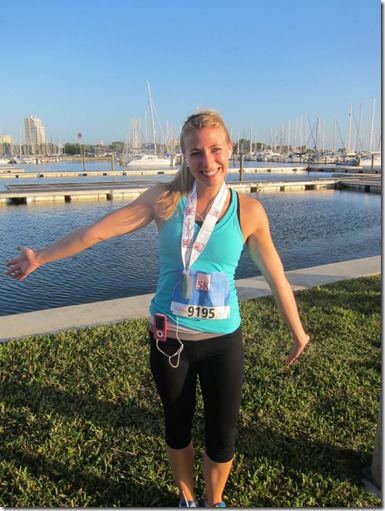 Now guess who wants to run her first half marathon? Leslie has her eye on the St. Pete Rock ‘n’ Roll half marathon  in February and I said I’d to it with her. I’m sure it will be colder by then, right?

Once we arrived home, I felt pretty nauseous. It took me a while to feel like I could stomach anything (even water) and eventually, after acting like a zombie on the couch and watching five episodes of Friends, I was able to eat and drink again without feeling like I was going to puke.

With my hunger back, I ate a big bowl of potatoes and onions leftover from my family’s breakfast before showering and eating my bodyweight in grapes and pretzels. 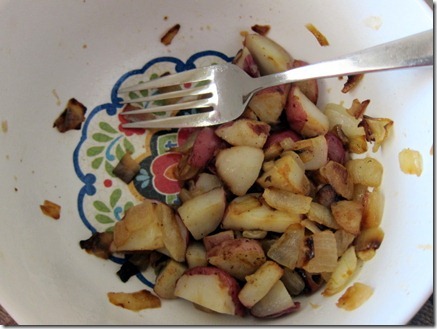 Though I definitely didn’t feel my best during or after today’s race, I am still really proud that I finished my fourth half marathon. I think the post-race high is finally starting to set in!

Hope you’re having a great Sunday!