Navigation
I am always on the lookout for recipe recommendations. I follow what feels like a bazillion food blogs but there’s something about someone recommending a tried-and-true recipe that makes me instantly want to give it a shot. I’m hoping that today’s post will do that for YOU! 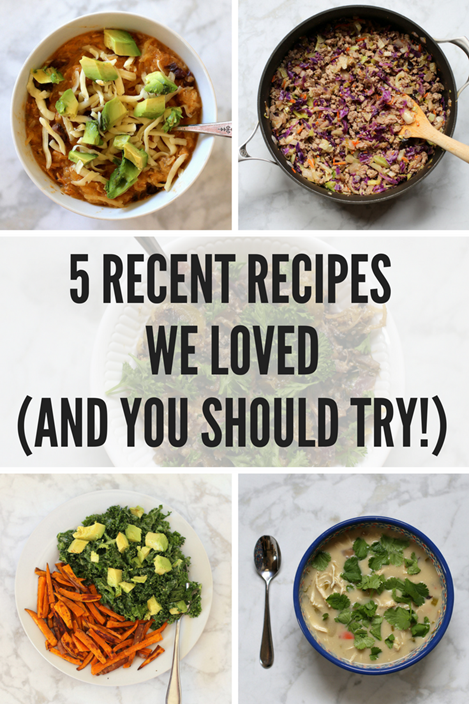 After what felt like a solid three-month hiatus from any cooking (pregnancy aversions are real, my friends), I’ve recently felt inspired to get back into meal planning and have been loving my time in the kitchen again. Couple that with the fact that Chase is constantly asking to help me cook and we’ve tried a lot of new recipes around here in the recent weeks!

Today I wanted to highlight five recipes we loved enough to make multiple times. Every single one of these recipes received two very enthusiastic thumbs up from both me and Ryan and I hope a few of them will pop out at you and help you feel inspired in the kitchen, too! 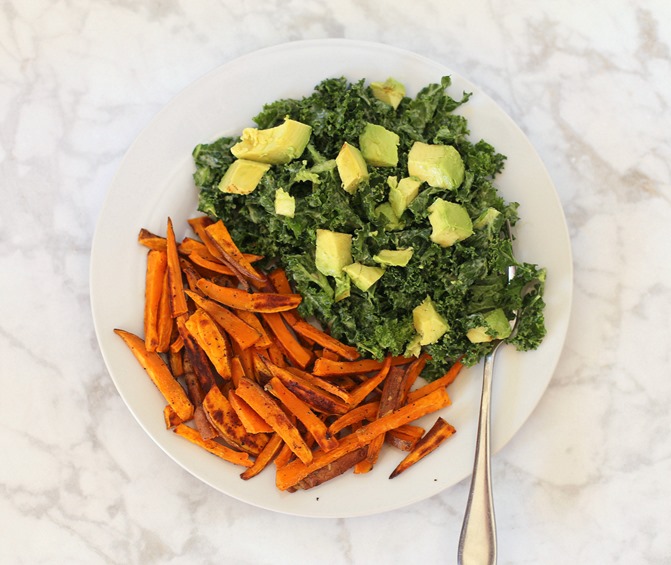 I couldn’t make this recipe fast enough when I saw it pop up on Pinch of Yum’s website. Everything about it appealed to me from the creamy avocado Caesar dressing to the crispy sweet potato fries. The dressing was rich in taste but still quite light and tangy and easy enough to make even without the use of a food processor, assuming the avocado you used to make it wasn’t too firm. (I just did some seriously vigorous stirring to make the dressing and it worked well, but then again I will do just about anything to avoid cleaning my food processor.) I topped Ryan’s salad with leftover chicken thighs for more staying power but thought the recipe was fantastic meat-free for me! 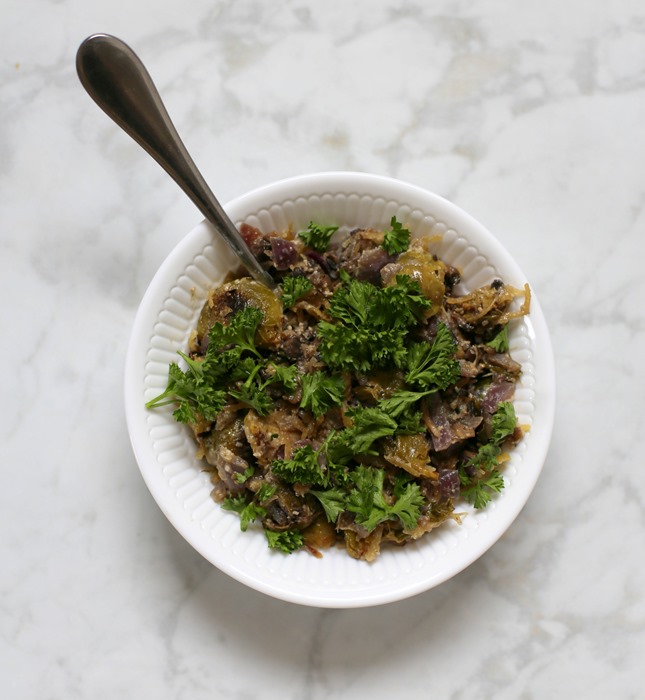 You must make this recipe simply for the vegan artichoke cream sauce alone! It absolutely blew me away and somehow the simple combination of marinated artichoke hearts and soaked raw cashews resulted in the creamiest, most addicting artichoke dip-like sauce that tasted fantastic both with the spaghetti squash AND as a dip for fresh veggies. (Yep, I made the sauce part of this recipe on its own because it was SO tasty and the perfect vehicle for cucumber, carrots and red pepper slices.) Ryan loved this recipe as well and we both found it quite satisfying. (The only change I made to this dish was adding my own roasted Brussels sprouts simply because we had some leftover and I didn’t want them to go bad.) Also, I feel like I should apologize to Alexis (the blogger behind Hummusapien) for the horrendous photography of her recipe which, admittedly, isn’t the prettiest dish to photograph! I tried to help it out with a pop of green from a parsley garnish but sometimes the ugliest foods are the tastiest, right!? 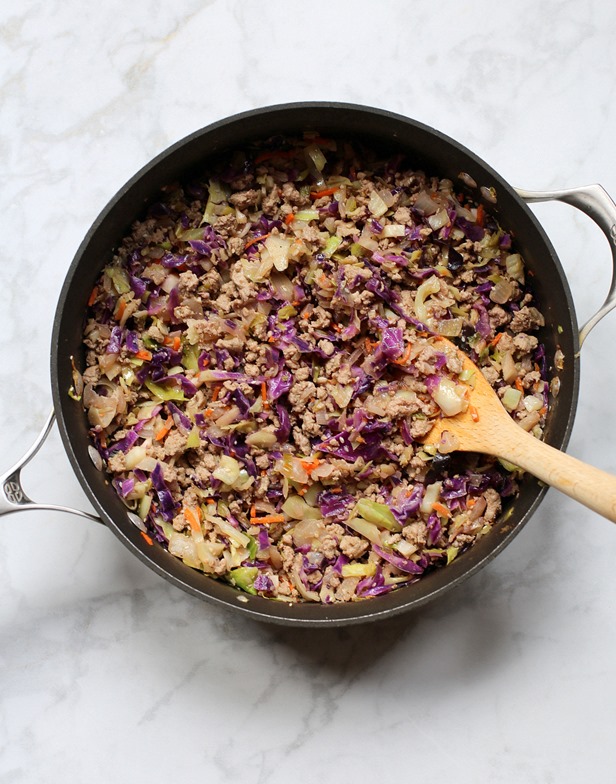 I’ve made a few Egg Roll In a Bowl recipes after stumbling across them on Pinterest but it wasn’t until a friend recommended this one to me that I felt like I finally found a winner. The best part? This recipe is SO simple and tasted fantastic as leftovers the next day as well… if you double the recipe. The recipe says it serves four, but had I not doubled the recipe, it would’ve only served me and Ryan for one meal, though I will admit that one pound of any kind of meat doesn’t go very far in our house with two hearty appetites. When I make it again, I’m planning to prepare a batch of brown rice along with it for more volume! 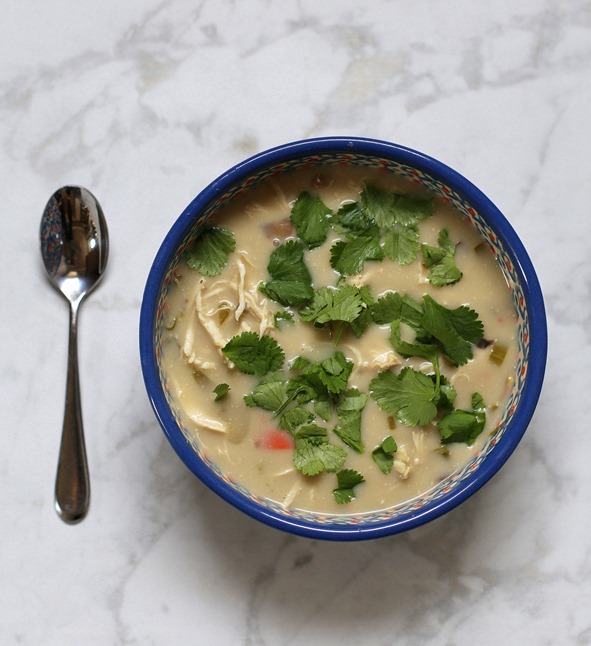 I’ve had this Thai Coconut Chicken Soup on my radar for nearly two years since Anne first shared it on her blog! Why did it take me so long to make this delicious dish!? I cannot get enough of anything Thai and coconut lately, so this recipe had to happen. I prepared a big batch of the soup a couple of weeks ago and then made it again on Sunday evening. I LOVE that this recipe is packed with vegetables and comes together quickly. It’s also a great vehicle for leftover chicken, so keep it in mind if you have a rotisserie chicken on hand or some leftover chicken breasts you want to use up. Tip: Use full-fat coconut milk. I’ve used both light and full-fat coconut milk in this recipe and definitely prefer the creamier consistency and more developed flavor of the full-fat coconut milk. 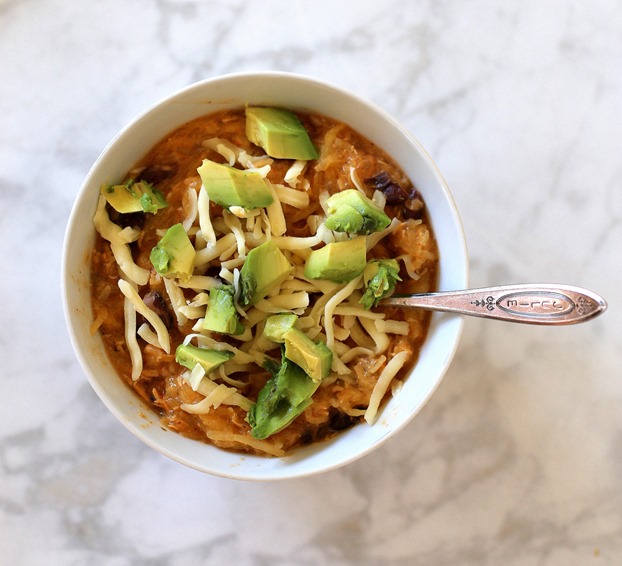 This recipe is so ridiculously fantastic and easily adaptable! Ryan and I both loved it so much that I’ve made it four times in three weeks. YUM. While the name Queso Chicken Chili doesn’t sound like the healthiest recipe on the planet, it’s surprisingly not heavy at all thanks to a small amount of cream cheese that somehow give the entire chili a creamy, cheesy flavor that kept both of us refilling our bowls over and over again. I’ve also played around with this recipe a lot, even adding shaved Brussels sprouts and cooked spaghetti squash to it at the end and omitting the corn and peppers to simplify everything and it turns out great every time.

What is one of the best recipes you’ve tried recently in your house?

Aside from the recipes mentioned above, a few more recipes we’ve loved recently that I didn’t get the chance to photograph include Glowing Spiced Lentil Soup (AMAZING and so EASY), Spicy Peanut Soup with Sweet Potato and Kale,  Slow Cooker Balsamic Pot Roast and Korean Beef Lettuce Wraps.