Navigation
Hello! The holly jolly-ness continued for the Fagan family over the weekend. With what feels like a very condensed holiday season thanks to such a late Thanksgiving, it seems like everyone is cramming all of the usual holiday festivities into a shorter time frame and our family is no exception.

After we hosted our friends for a Christmas party last year that involved decorating cookies, Chase kept asking if we could have friends over for a “cookie party” again this year so we selected a morning when most of his friends are out of preschool and set up a Friday morning cookie play date. 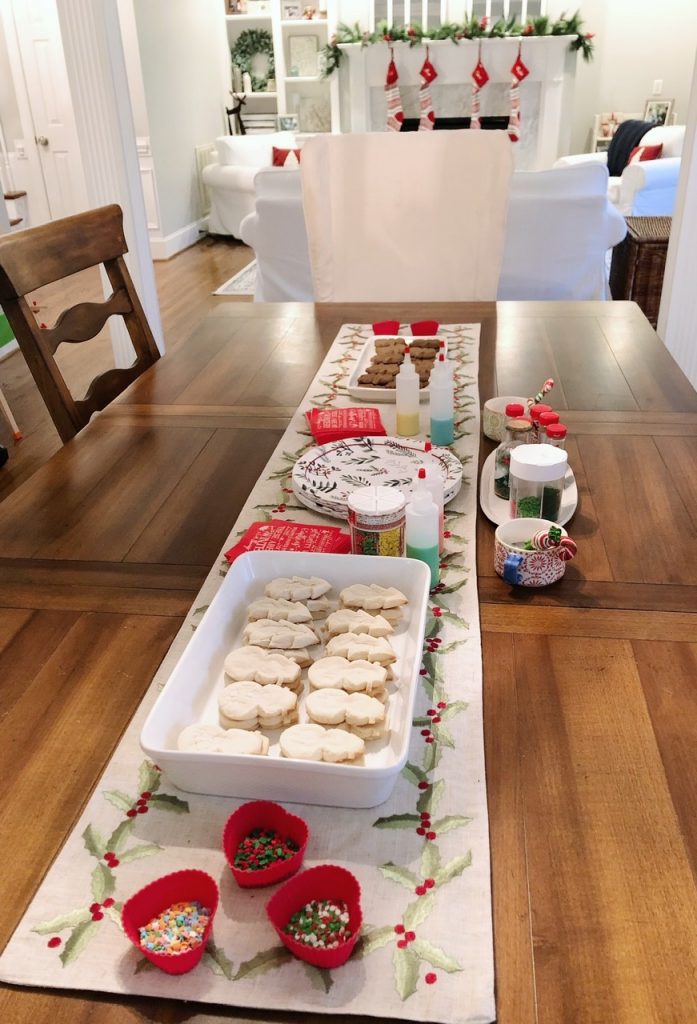 I had big plans to bake all of the cookies from scratch but as our guest list began to grow, I happened to eye some pre-cut holiday sugar and gingerbread cookies at ALDI and bought eight boxes! It was the BEST decision and made prepping for the party a million times easier since all I had to do was bake the cookies, make the icing (I followed this recipe and ordered these squeeze-bottles for decorating), buy a bunch of sprinkles and some festive plates and napkins and call it a day! I also had some healthy and savory snacks on hand since I knew there would be a lot of cookie and icing eating involved in our morning. 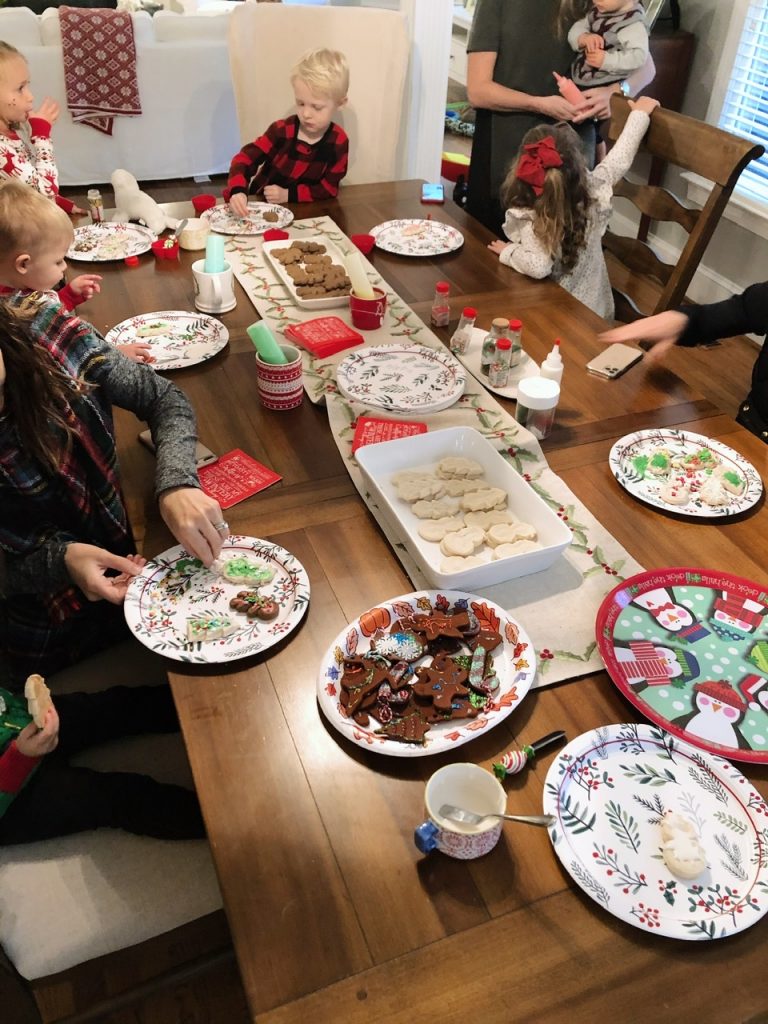 Most of the children came in their holiday pajamas and everyone arrived with a wrapped children’s Christmas book to exchange as part of a small Christmas book swap. It was such a fun way to celebrate with friends and hearing the kids talk about their favorite Christmas books was so sweet!

Our holiday fun continued into the evening on Friday when we headed off to our friends’ house for our fourth annual kid Christmas pajama party! 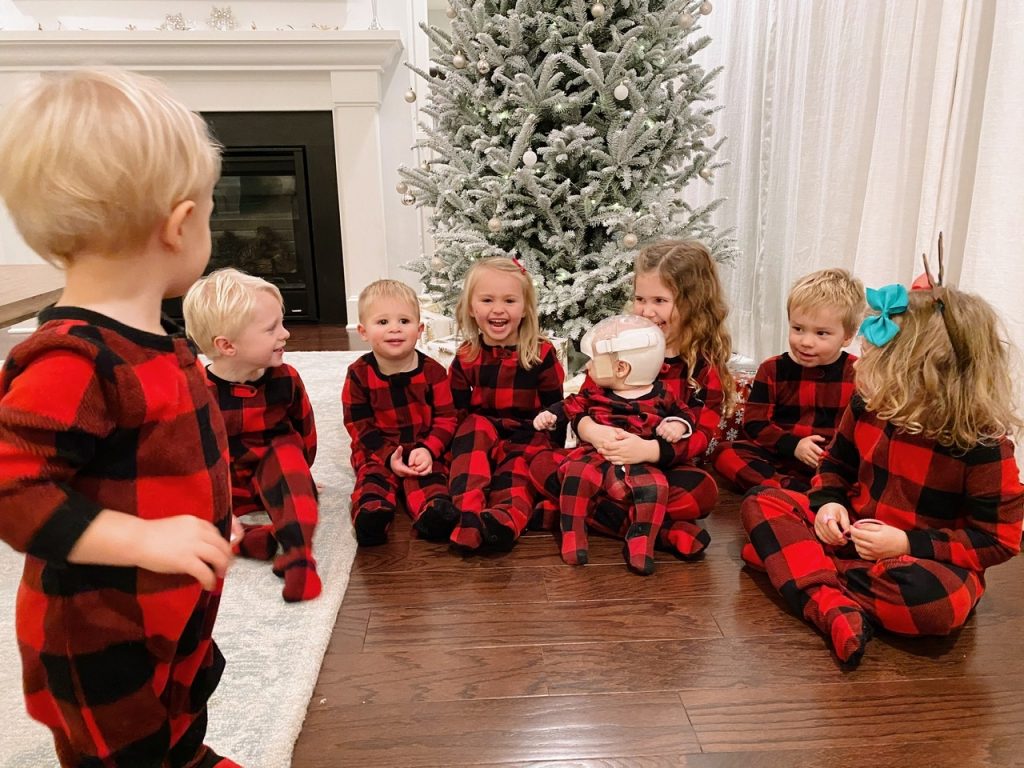 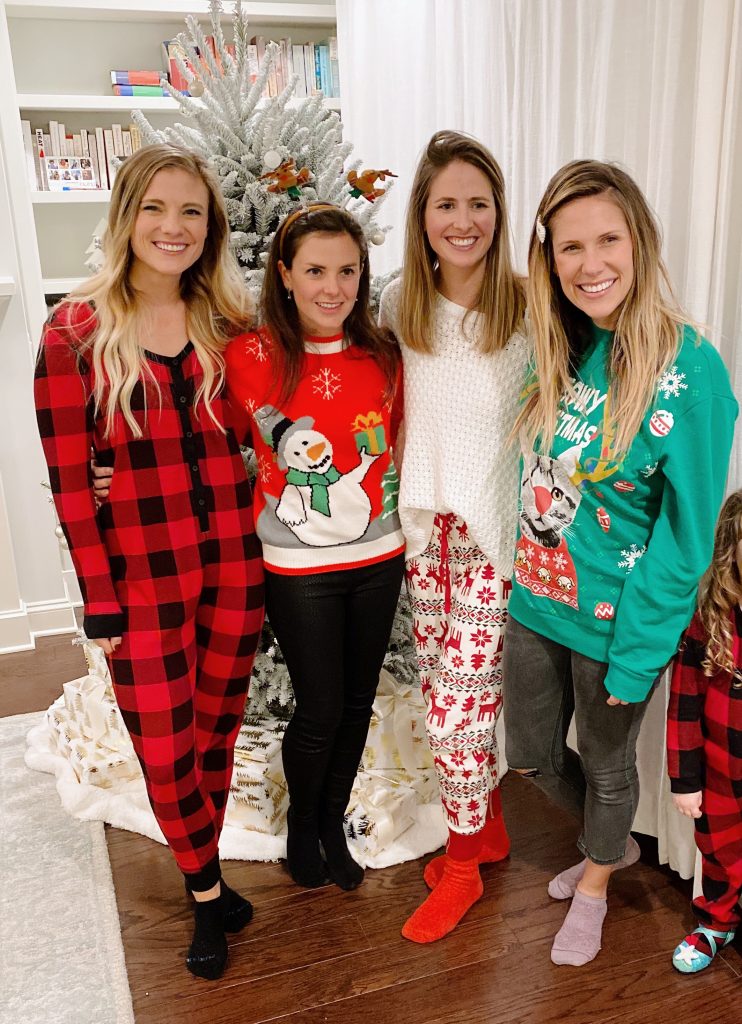 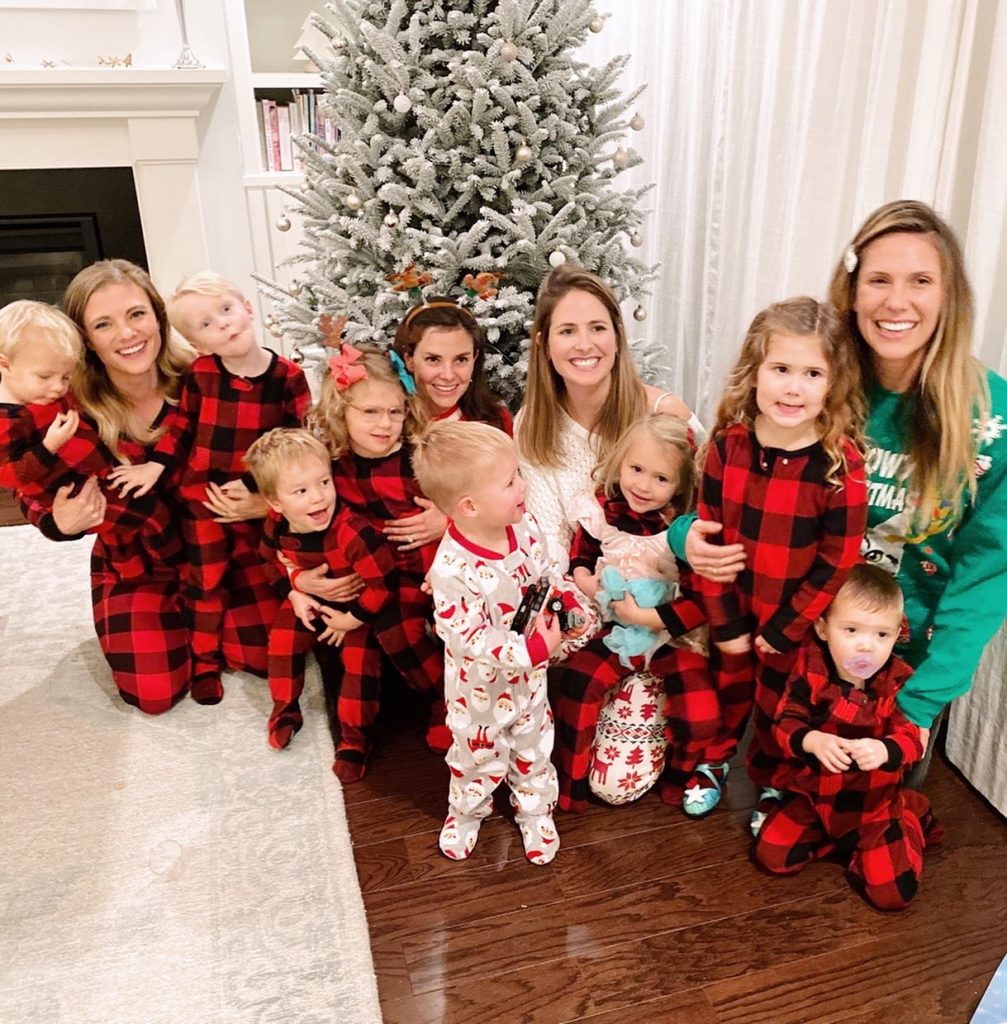 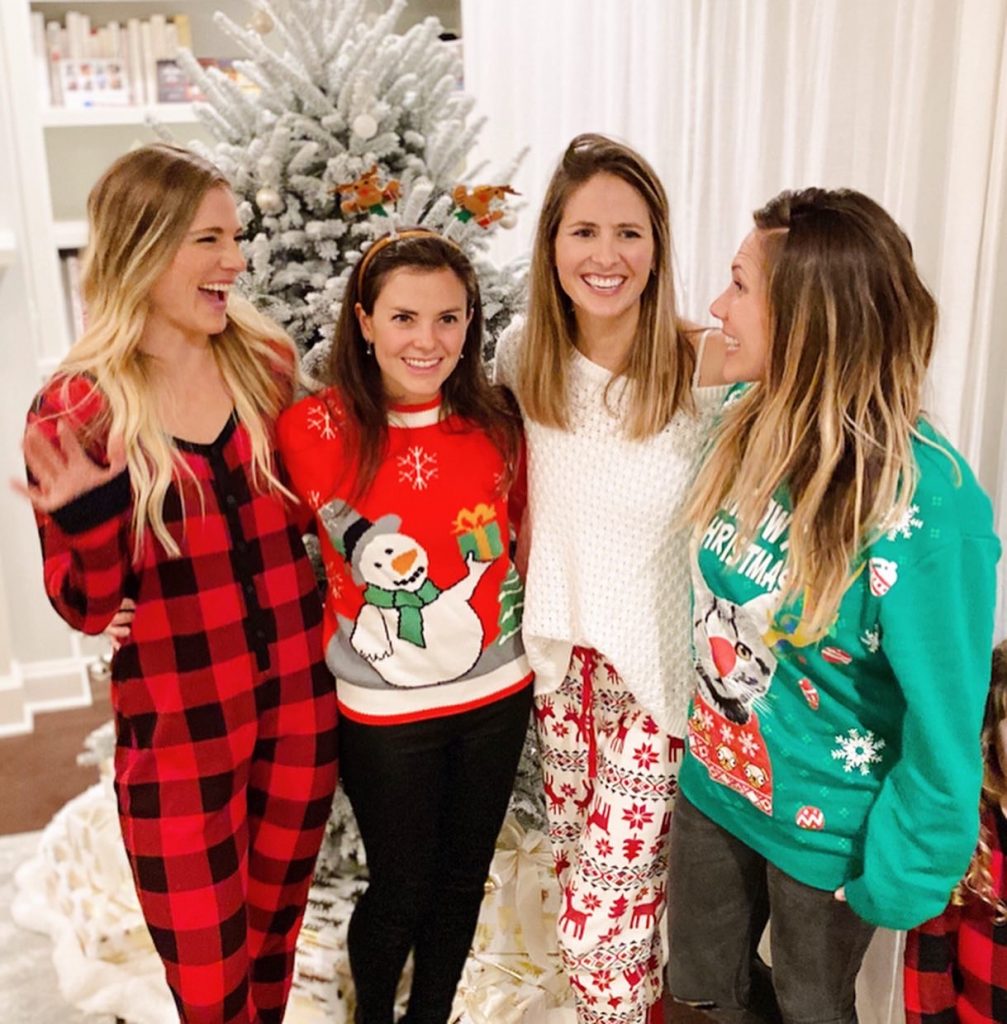 We’ve been rotating houses for this celebration ever since our first kids were one and they LOVE wearing pajamas that match their buddies. The adults love an excuse to get everyone together to celebrate! 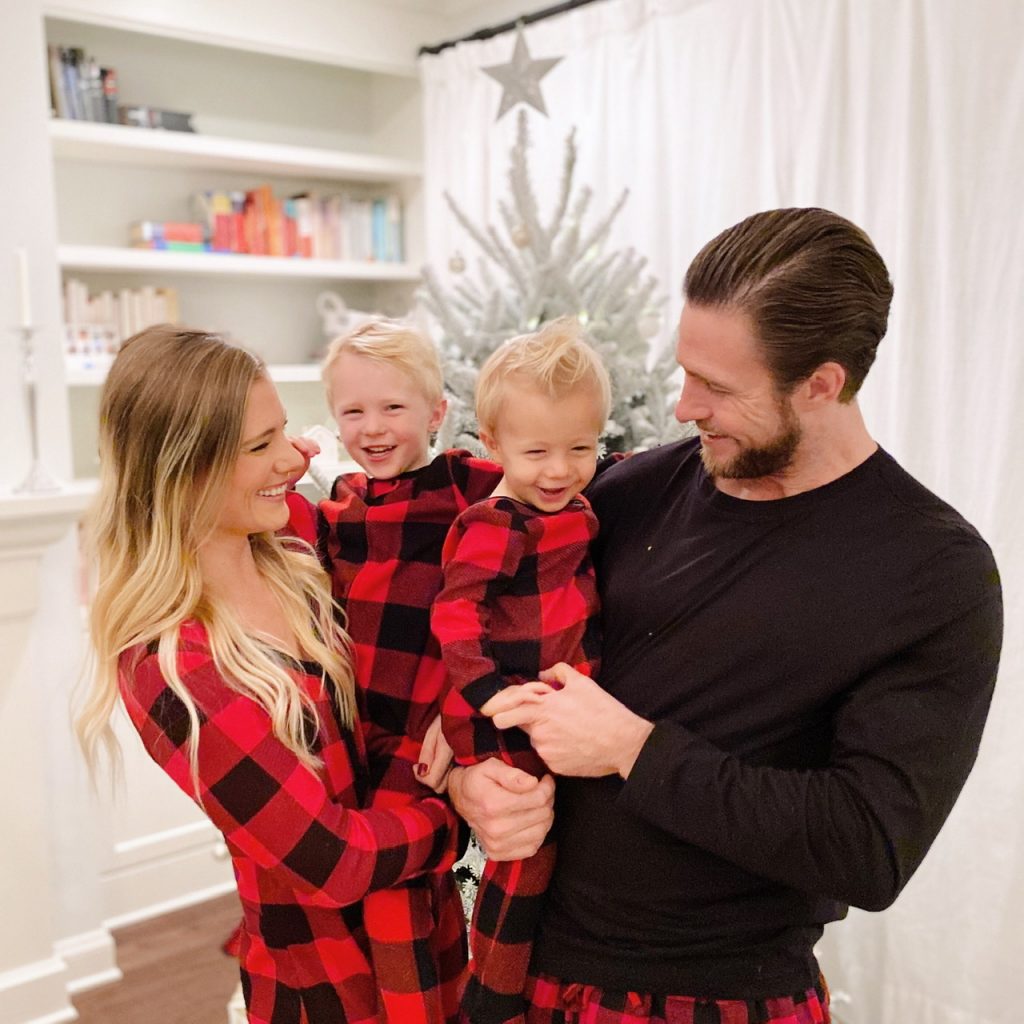 (The boys’ fleece footie pajamas are from GAP. I bought my buffalo plaid onesie from Old Navy and Ryan’s pajamas from Kohl’s.) 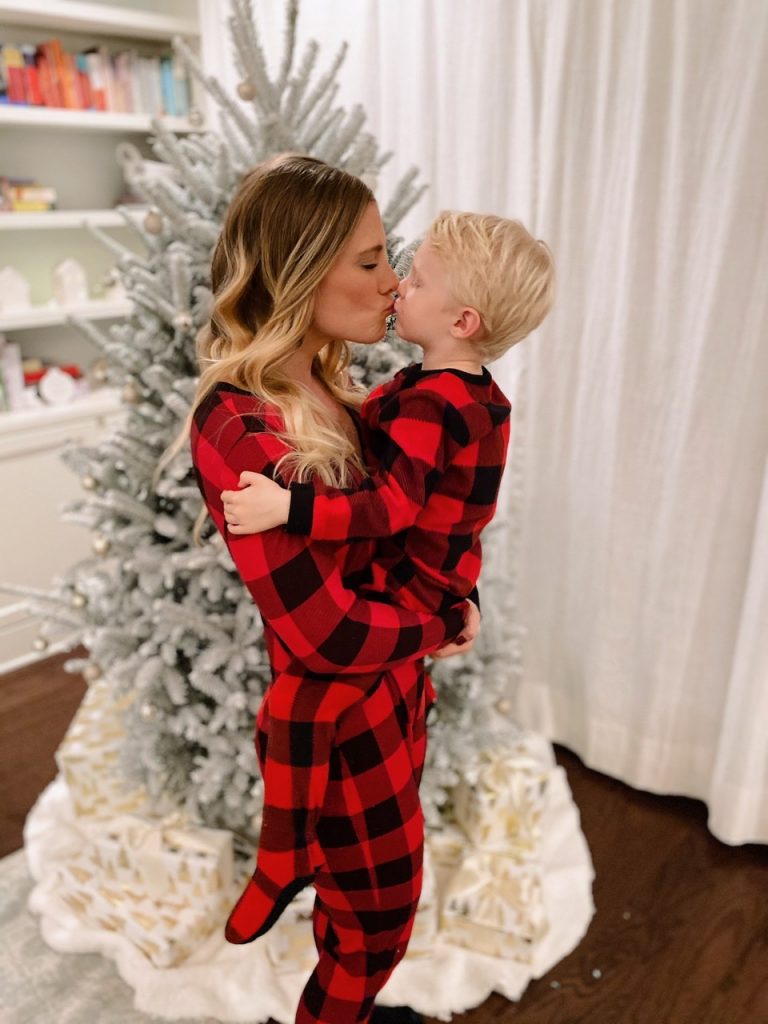 Our friends Laura and Steve had all of us over for dinner (some of you may remember that Laura was the incredibly thoughtful hostess behind my ice cream baby sprinkle) and once again secured their reputations as the most incredible hosts ever. Laura truly thinks of everything and knocked the ball out of the park with the homemade gingerbread play dough cookie cutter sets she gave to each of the children. 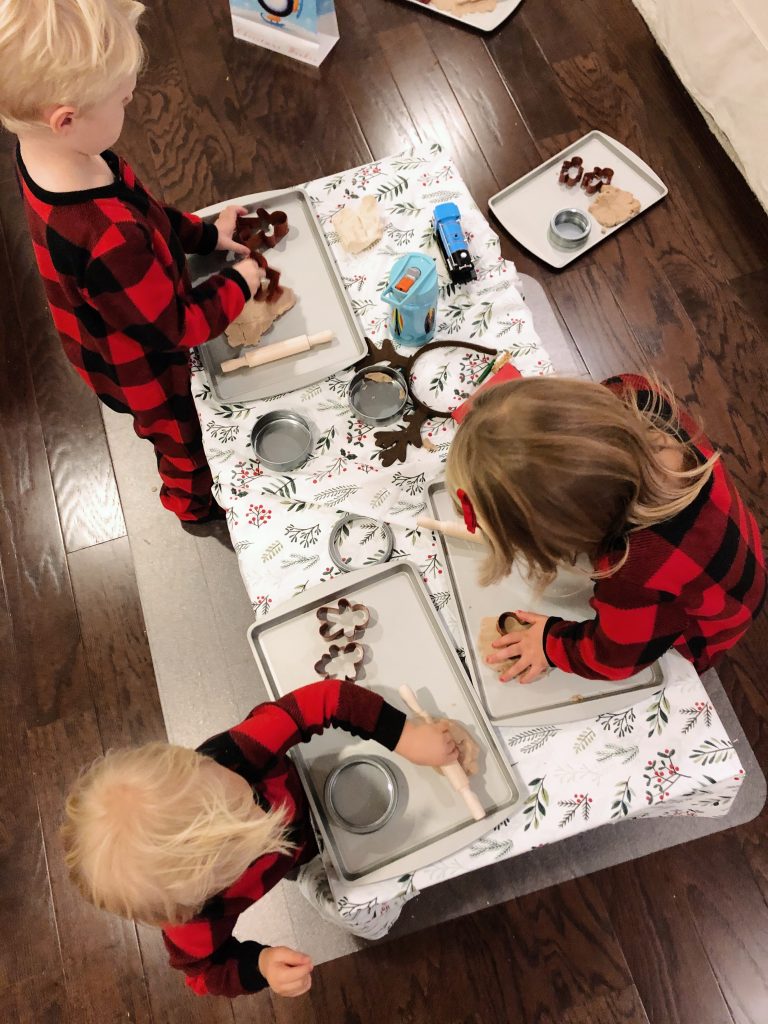 The play dough even smelled like gingerbread cookie dough and Ryder naturally dove into his face-first. Also, can we just take a moment to appreciate play dough on a cookie sheet!? Genius! Why have I never thought of this before? This will be come a staple when it comes to play dough fun in our house so we don’t constantly find little pieces of crusty play dough all over our house for all the day.

We all made it home after our kids’ bed times but thankfully Ryder fell asleep like a champ the minute we placed him in his crib and though Chase was all hopped up on holiday cheer and cookies, he was asleep soon after.

Saturday morning kicked off our second Santa sighting of the season! Last year we were invited to one of Ryan’s coworker’s houses for a Santa brunch and were thrilled to be invited again this year because it was so amazing. They hire the incredible Santa from Birkdale Village to come to their home one morning in December and invite a bunch of families over for brunch and pictures without all the lines and craziness that usually surround photo ops with Santa.

This is the year we introduced Chase to the concept of “Santa’s helpers” — aka a bunch of pretend Santas who take pictures with kids because the “real” Santa is so busy at the North Pole — but since the Santa we saw on Saturday had a real beard, he was the real one! The first thing Chase did when it was his turn to take a picture with Santa was ask about his beard and he didn’t miss a beat when he told Chase he could pull on it! 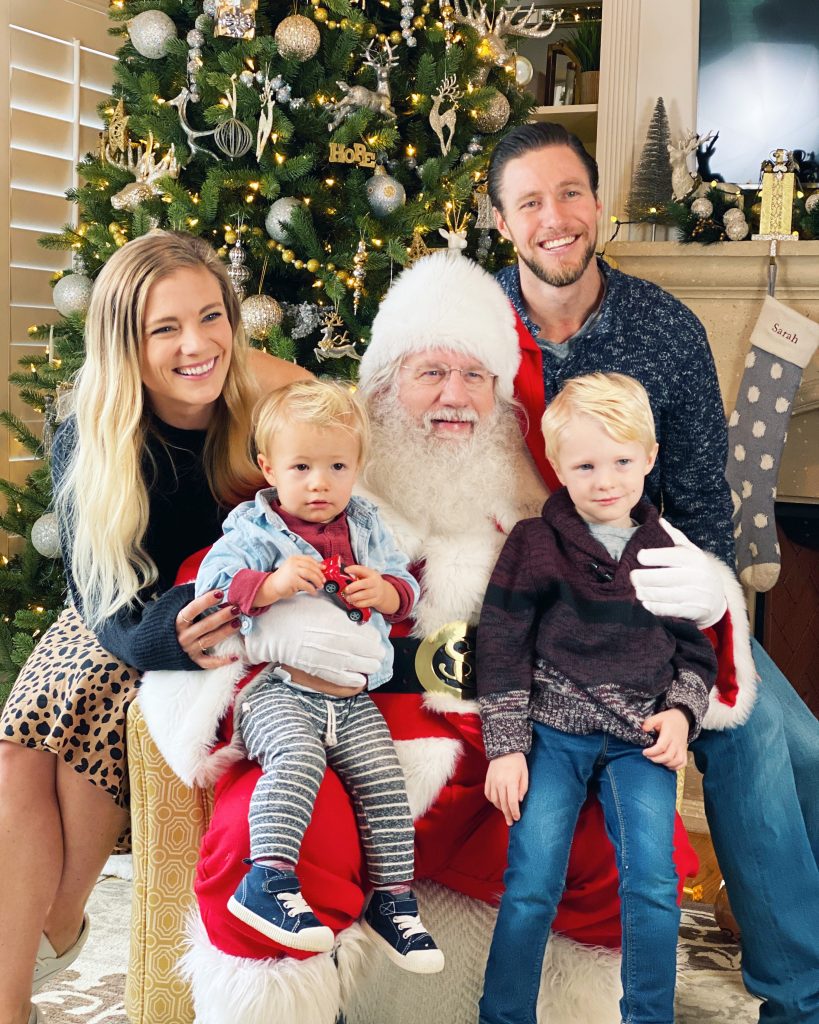 Though our boys could not look LESS interested in Santa in the above photo, Chase was mesmerized by him (and yet again asked for a guitar) while Ryder chilled out once Mom and Dad joined in the picture. Ryder was quite apprehensive when he was placed on Santa’s lap with just Chase beside him and definitely did better with some grown up reinforcement when it was his turn to come face-to-face with the big guy.

After the Santa brunch, we loaded into my car and drove south to the Ballantyne Hotel to check out Gingerbread Lane, a series of gingerbread houses decorated by children, adults and professionals. 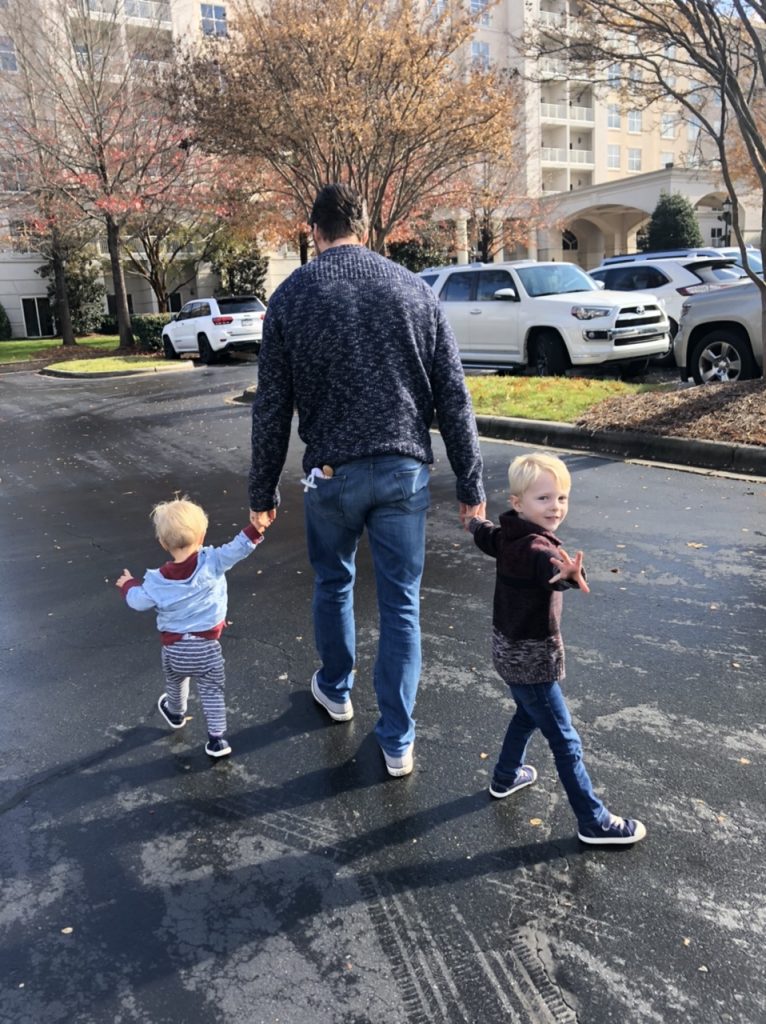 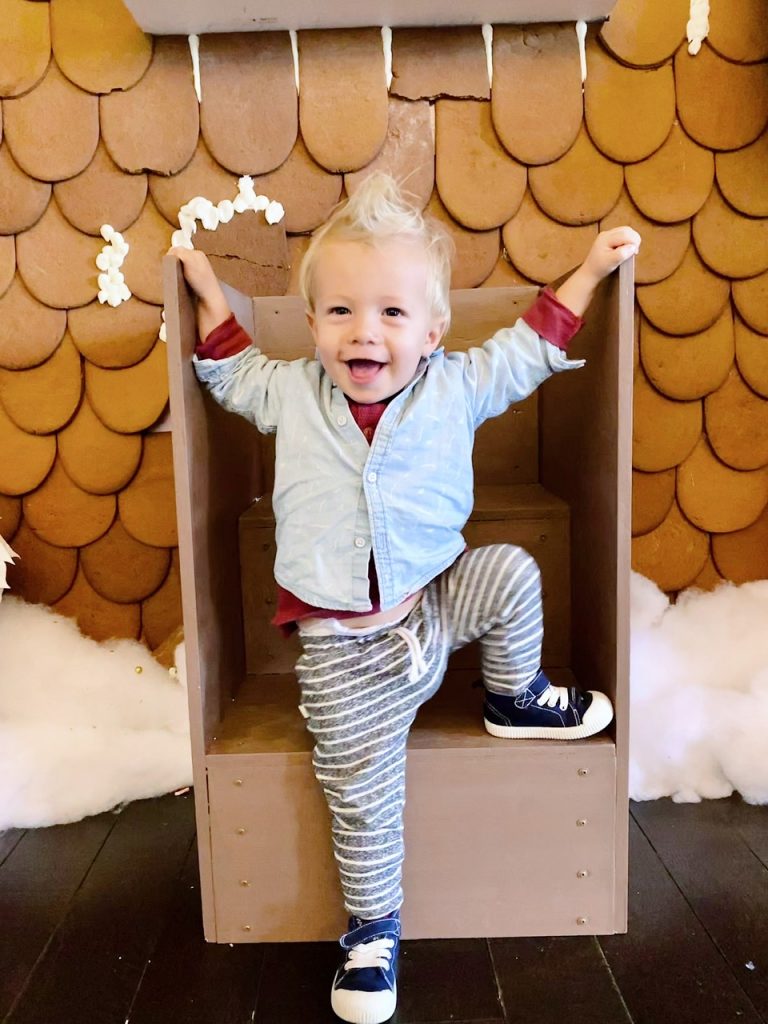 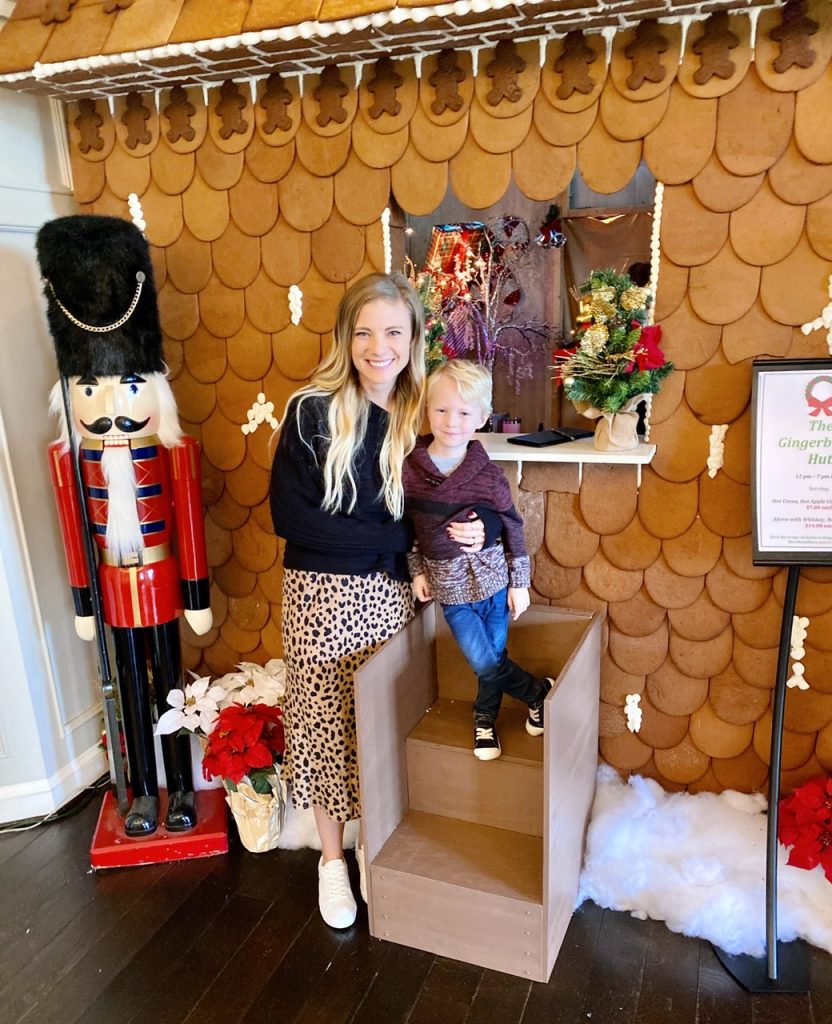 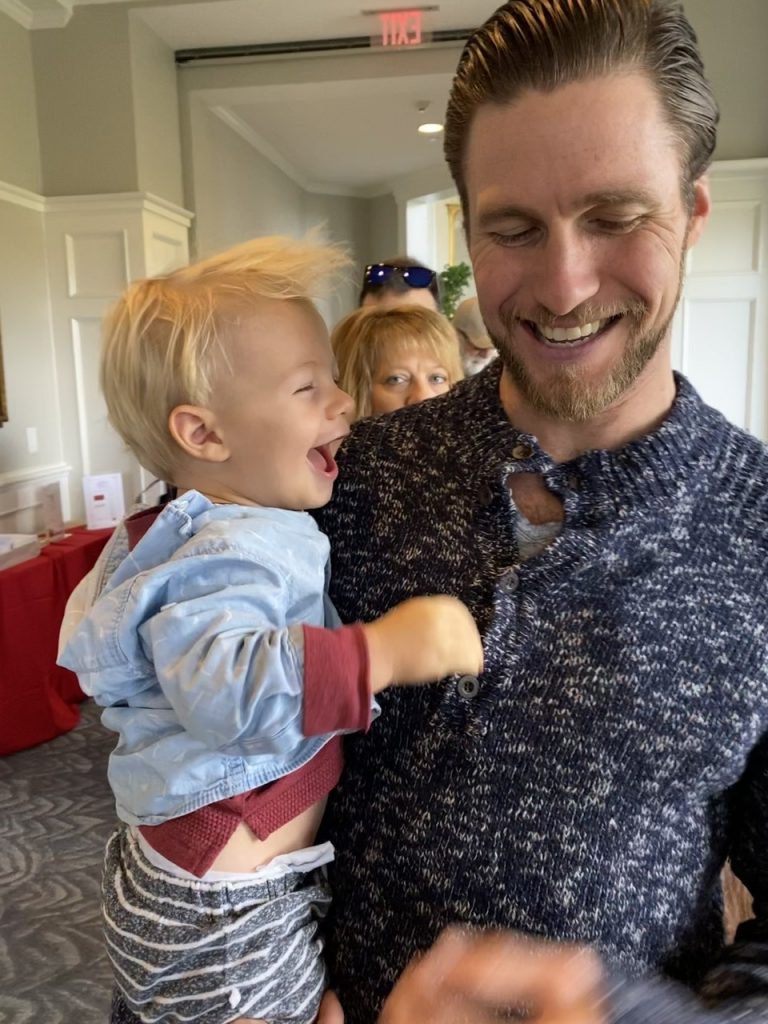 The houses were so creative and incredibly impressive. (There was even an Amazon Prime house which made me laugh out loud. It had a bunch of brown boxes out front and two big Amazon delivery vans driving by.) 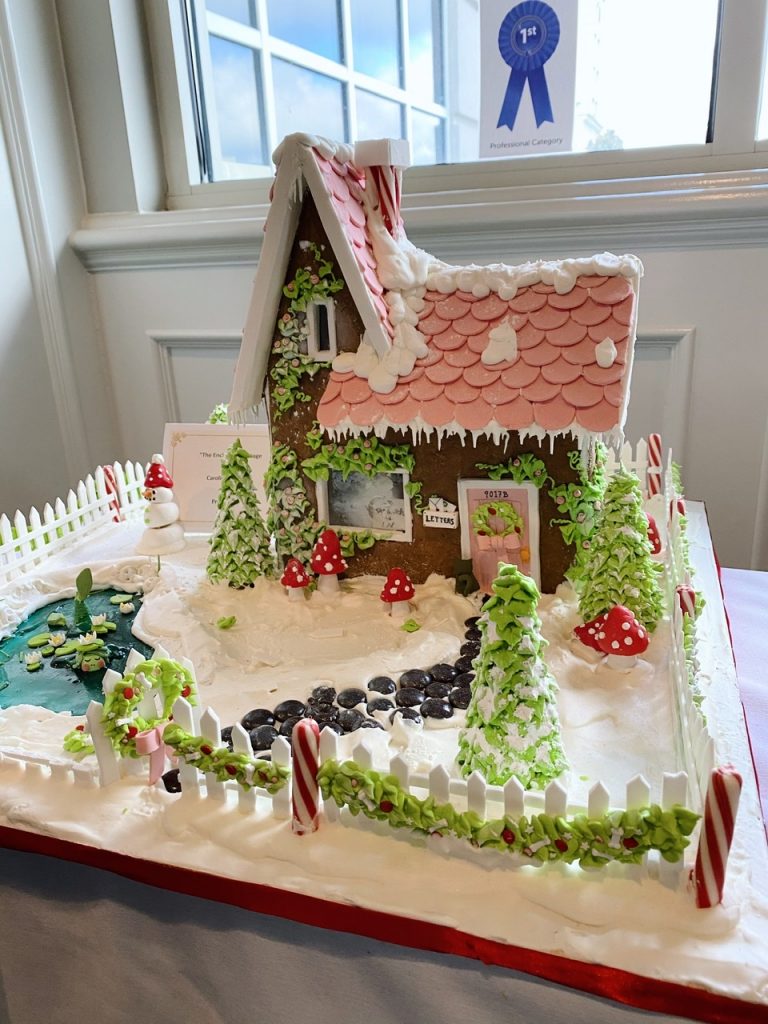 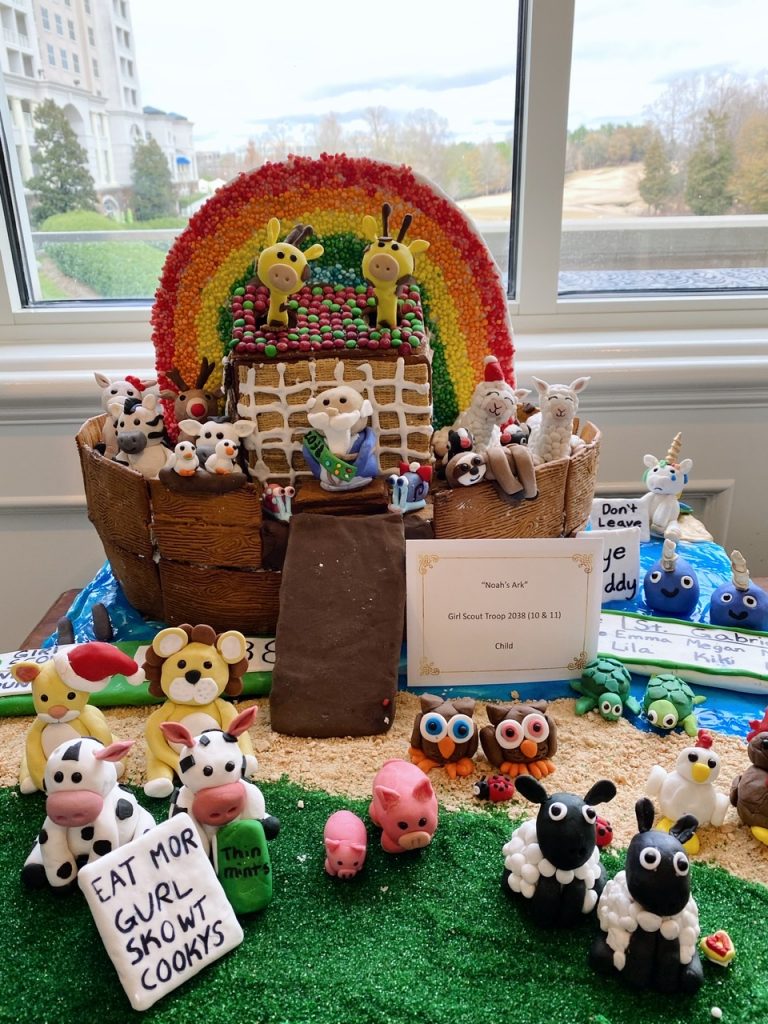 Gingerbread Lane visitors vote on their favorite house for the People’s Choice Award by making a donation to Levine Children’s Hospital. 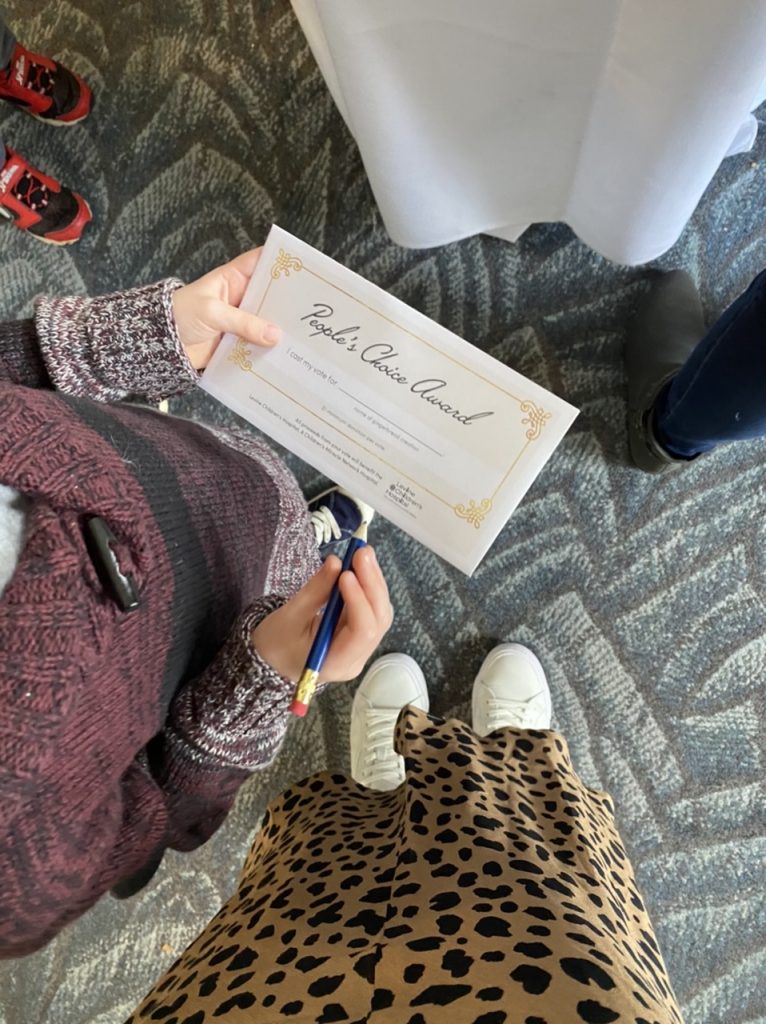 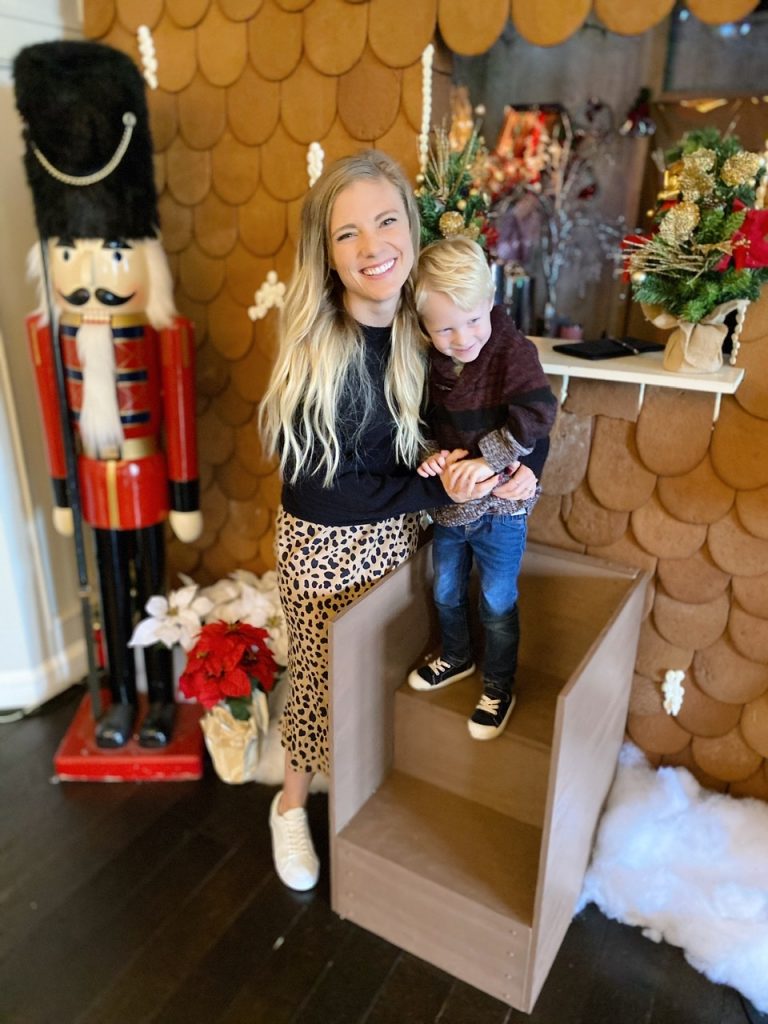 Chase took his voting very seriously and I knew he found his winner when we came upon a big red gingerbread truck with a dog behind the wheel. After casting our votes, we made our way back home so Ryder could nap while Chase and I headed off to do some Christmas shopping! I feel like I do not get a ton of one-on-one time with Chase these days so having a couple of hours out of the house with my big kid was such a treat! He got really into picking out special gifts for our family members (and a glittery star ornament for Claire because “she will love it”) and we arrived home soon after Ryder awoke from his nap.

After such full weekends, we intentionally kept our Saturday night schedule clear in favor of a pizza and a holiday movie with the boys. We dug into our dinner as we watched about half of Elf (I swear we never make it through a full movie with these kids) and then called it an early night.

Sunday was rather low key but in a wonderful way. We went to the early morning church service and followed that up with a walk to the park in our neighborhood. 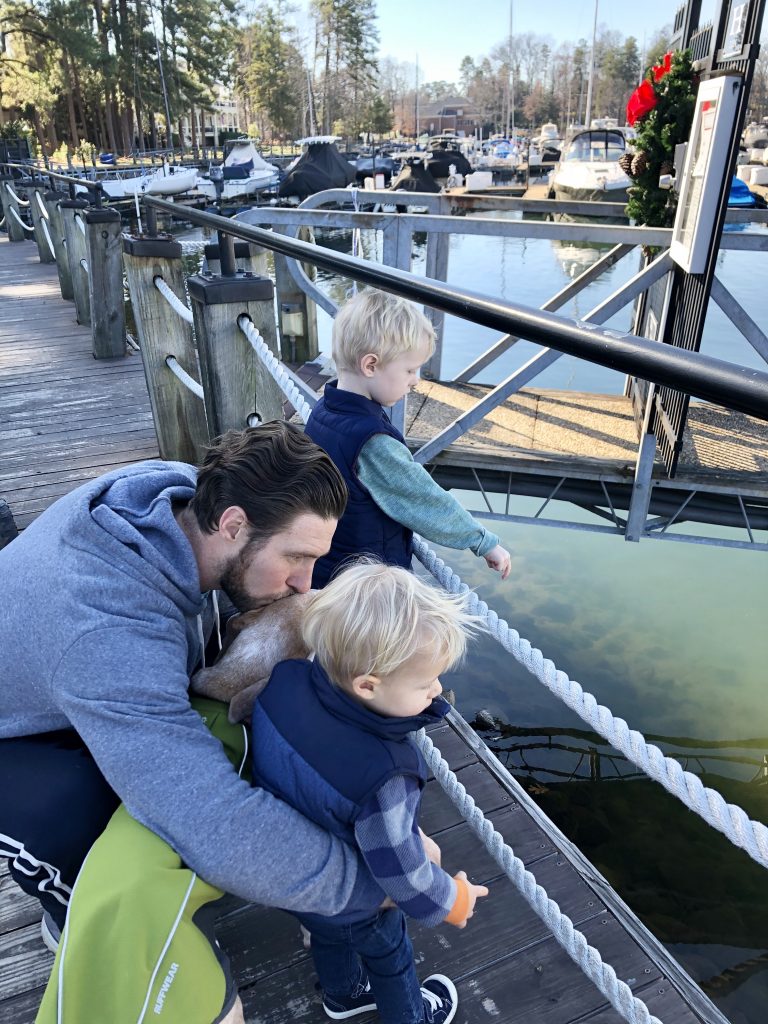 It was sunny and unseasonably warm so we wanted to take full advantage of the beautiful weather! We made it back home around lunchtime and once everyone was fed, Ryder went down for his nap and we all hung around the house while he slept. Once he was up, we took a family trip to the grocery store and gathered everything we needed to get us through the first part of the week. I also needed to pick up some things to make dinner for a friend who is pregnant and has the flu (a hooorible combination and one I experienced it first hand when I was pregnant with Ryder) and delivered dinner to their family while Ryan took over “brother bath” duties and got the boys in their pajamas.

After we did the whole dinner and bed time routine with the boys, Ryan and I crawled into bed as well and I read until I realized I was re-reading the same page of my book over and over again. Clearly I was too tired to have my brain compute any of the words. Lights out!

And now we’re one day into the week before Christmas and everything feels equal parts festive and hectic over here. How are you guys doing right now?! We are staying put for the holidays this year so at least the usual stress of travel is out of the equation but it still feels like Christmas is coming at warp speed this year!

I hope you guys all have a wonderful week and, as always, thanks for making PBF a part of your day!