Navigation
Hey friends! As I sit down to write the first part of this blog post (all of my work seems to be completed in small fragments these days!), the sun is shining through my office window. After several back-to-back days of clouds, rain and storms, it feels nice to see the sun again! Temperatures are back to the mid-80s in Charlotte right now which makes me feel a little ridiculous for decorating our house for fall over the weekend but since Hurricane Florence had us hanging out at home, it seemed like a good time to knock it out. 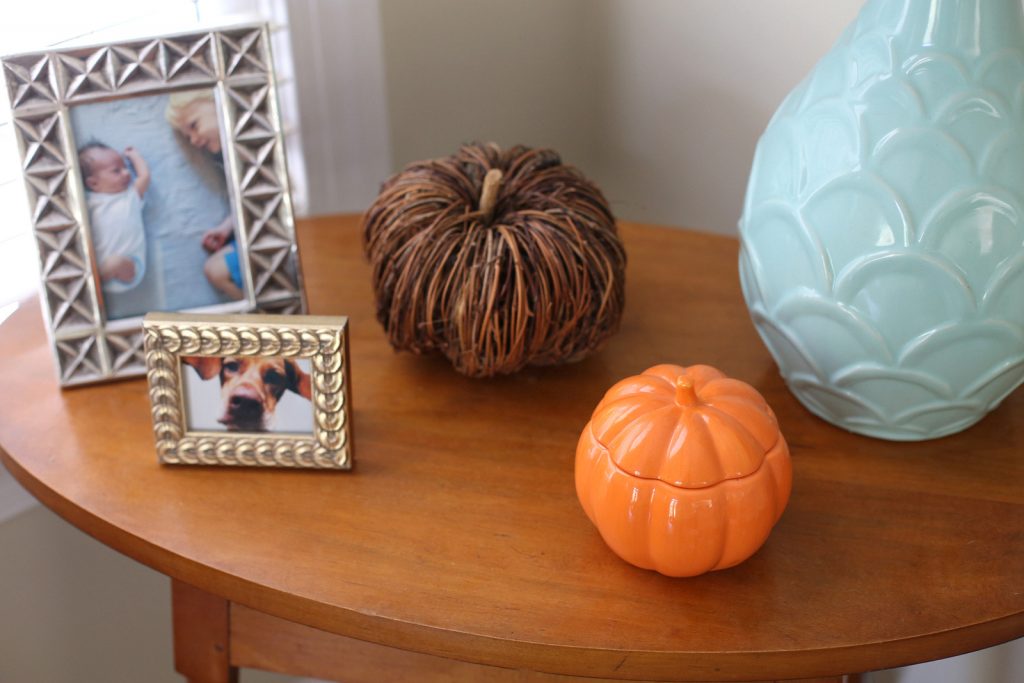 I wanted to pop in today to share another random day-in-the-life recap with you guys and give you a peek into our Tuesday. Let’s get to it!

All plans I had for waking up before the boys went out the window when Ryder was up before the sun with me with no intent to go back down. Thankfully Ryder almost always wakes up in a great mood, full of gummy smiles and sweet baby chirps. He’s often content to kick and wiggle on a blanket in the mornings so I got dressed for the day and then brought Ryder downstairs with me and set him up on the floor while I made coffee and spent some time going through one of the chapters of my small group’s most recent study. 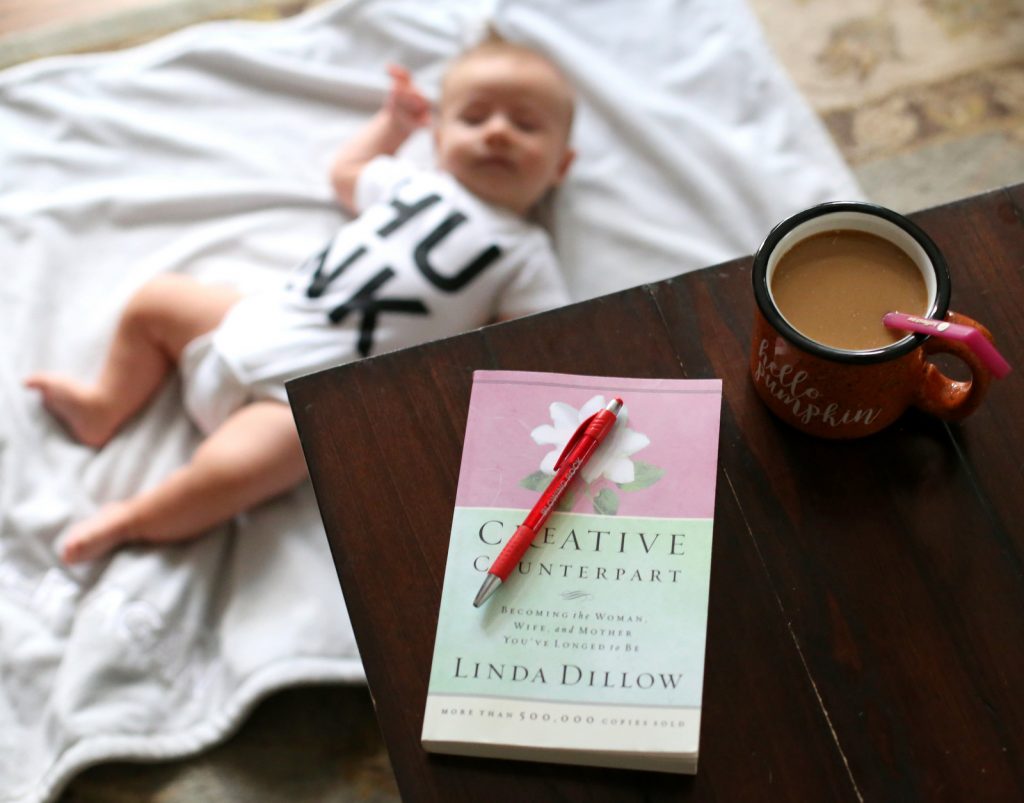 Ryder wasn’t up for too long before he was ready for a cat nap and so I swaddled him up, placed him in the Rock ‘n’ Play, made myself a smoothie and then got some work done on my laptop while he snoozed. 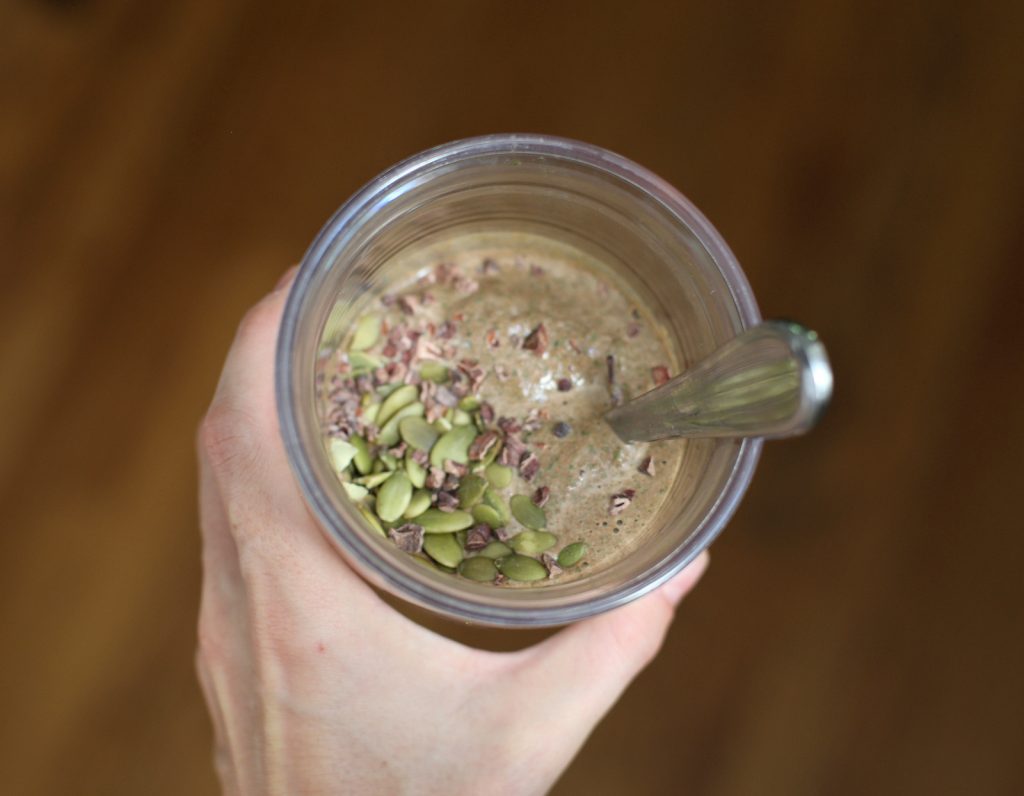 (Sorry it looks so gross! I swear anytime I add cocoa powder to a smoothie it instantly looks like cat puke.)

I spent my early morning work time tackling emails and following up on some upcoming partnerships before I heard Chase calling me from his room. Ryder was making noises as well, so I quickly nursed him and then we headed into Chase’s room to get dressed and read some stories before preschool. 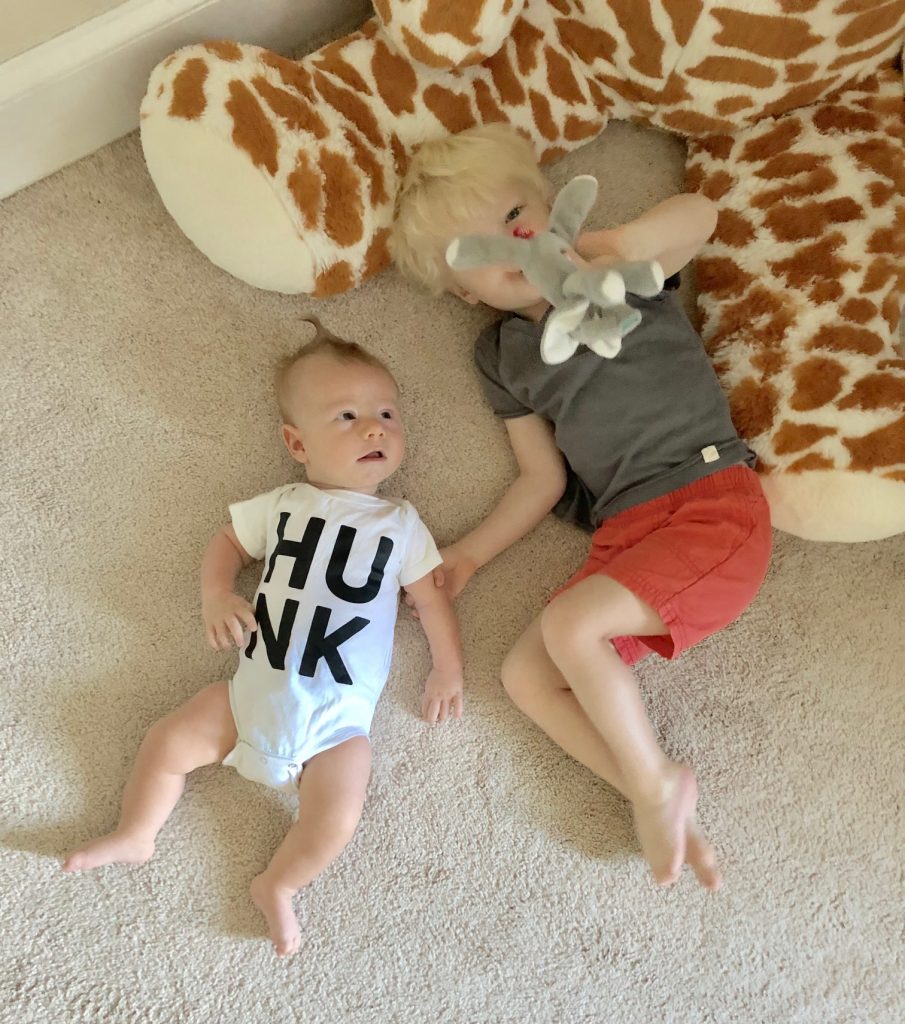 Whenever I walk into Chase’s room in the morning he almost always asks me, “Mom, you have Baby Ryder?” and immediately wants to get in his little brother’s face. It’s actually been a nice little incentive to help Chase get dressed at warp speed since I tell him he has to be dressed like his little brother before playtime can begin. We read The Cat in the Hat and played in Chase’s room for a bit before making our way downstairs for breakfast and a little more playtime before we needed to head out the door.

Chase only has school two mornings this week thanks to a hurricane-related closure on Monday and a teacher work day today and he was more than ready to see his teachers and friends. He ran inside and gave me a dinosaur growl goodbye. (He was a velociraptor yesterday, in case you were wondering.)

Once Chase was settled in school, Ryder and I made our way to boot camp! 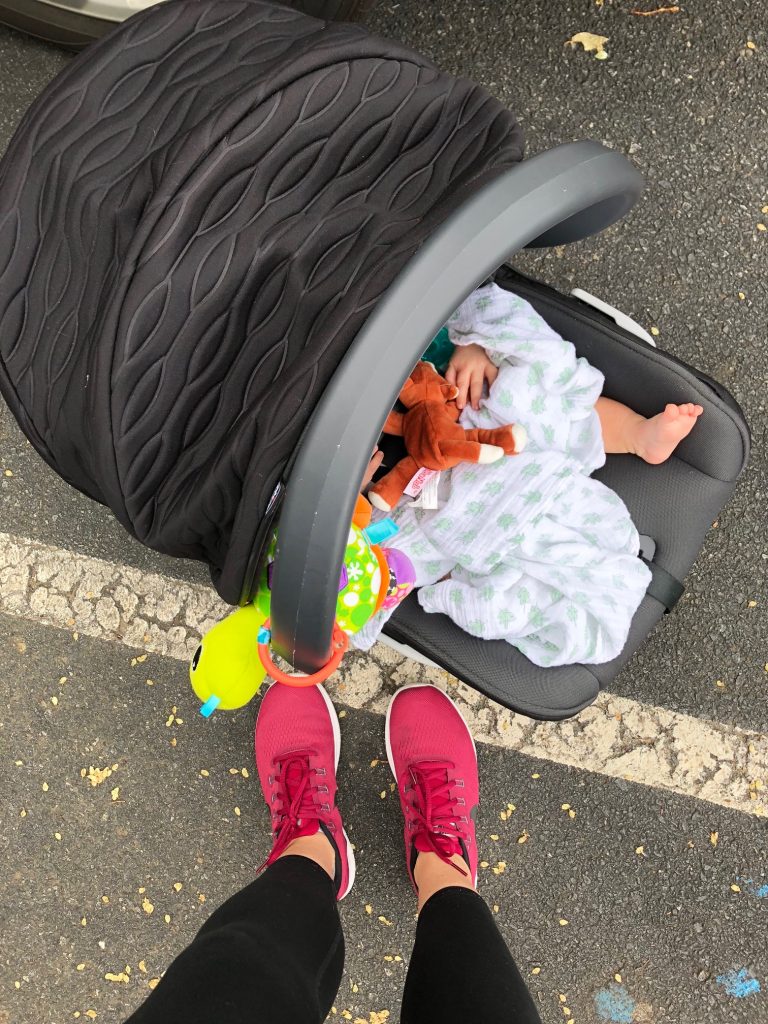 While Ryder hung out in childcare, I went through a total body strength workout that looked like this: 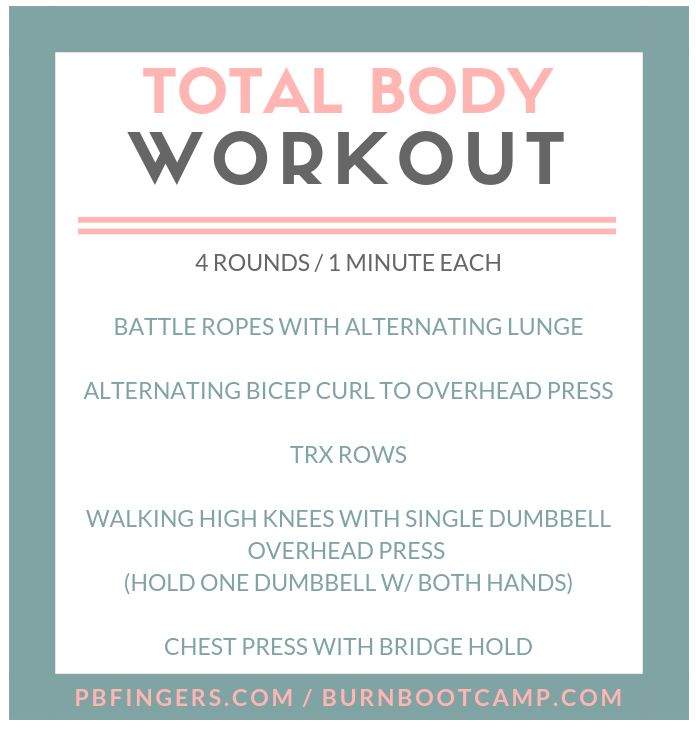 (The workout includes my modifications since I’m still modifying quite a bit.)

It felt good to move and sweat and Ryder seemed to do well in childcare. I chatted with some friends for a bit after my workout and then we headed home so I could nurse Ryder and get a little work done before preschool pickup. Ryder wasn’t in the mood for a long nap so my work time was cut a bit short but I took advantage of a very awake and very happy baby to snap some pictures of him to celebrate three months with this sweet guy! 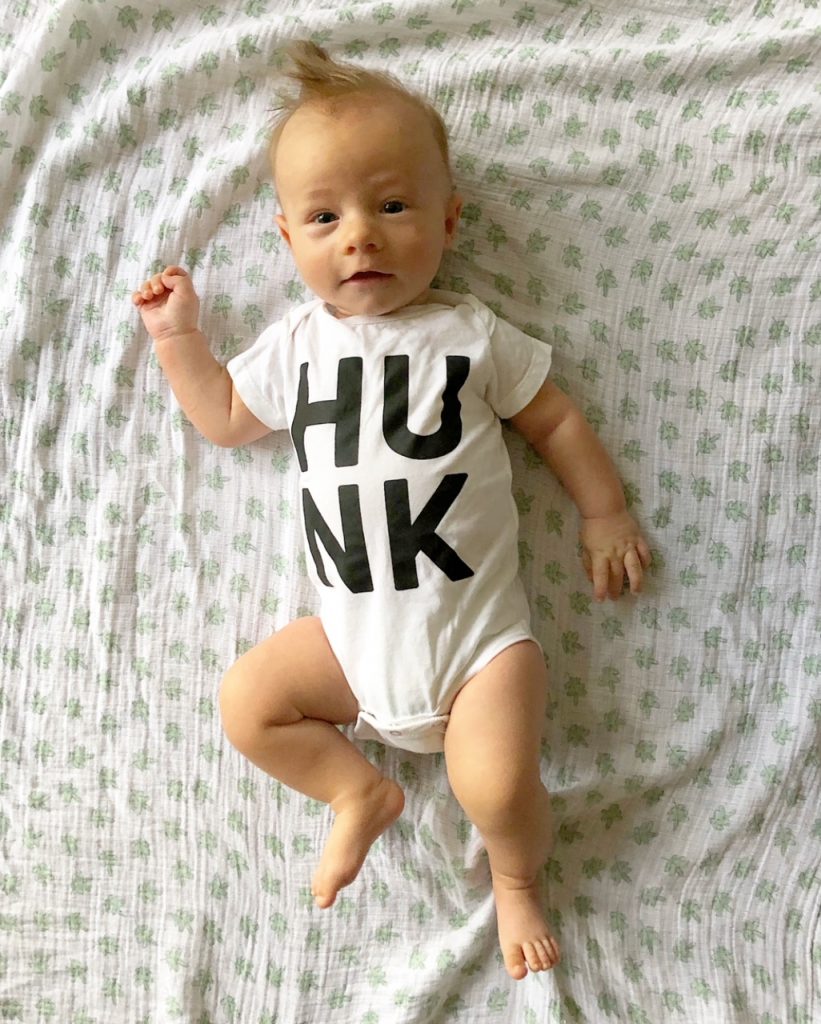 I just love the way Ryder reacts to happy faces, voices and smiles. It’s almost like he looks at the world around him through the eyes of a tiny human sponge that just wants to absorb everything. His big gummy smiles seem to overtake his whole body and he’ll often curl up into a smiley ball that makes me smile right along with him. 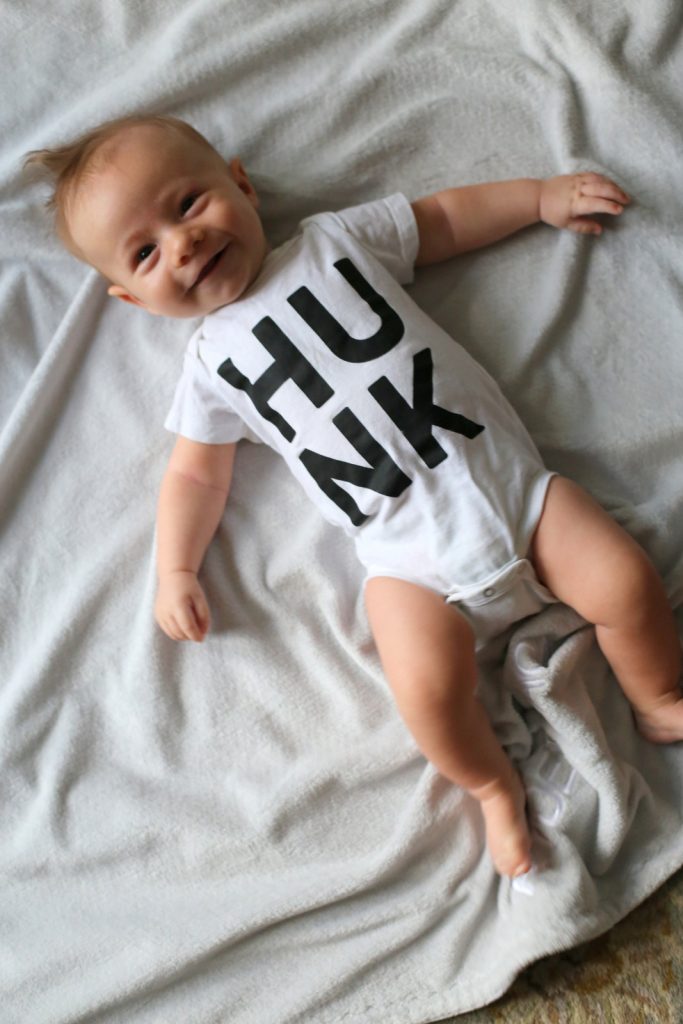 Before heading out the door to pick Chase up from school, I figured I should take advantage of an awake and happy baby and made myself lunch. Everything came together quickly thanks to yet another Daily Harvest harvest bowl (the obsession continues!) and this time I added some shrimp and pumpkin seeds to the red lentil bowl. 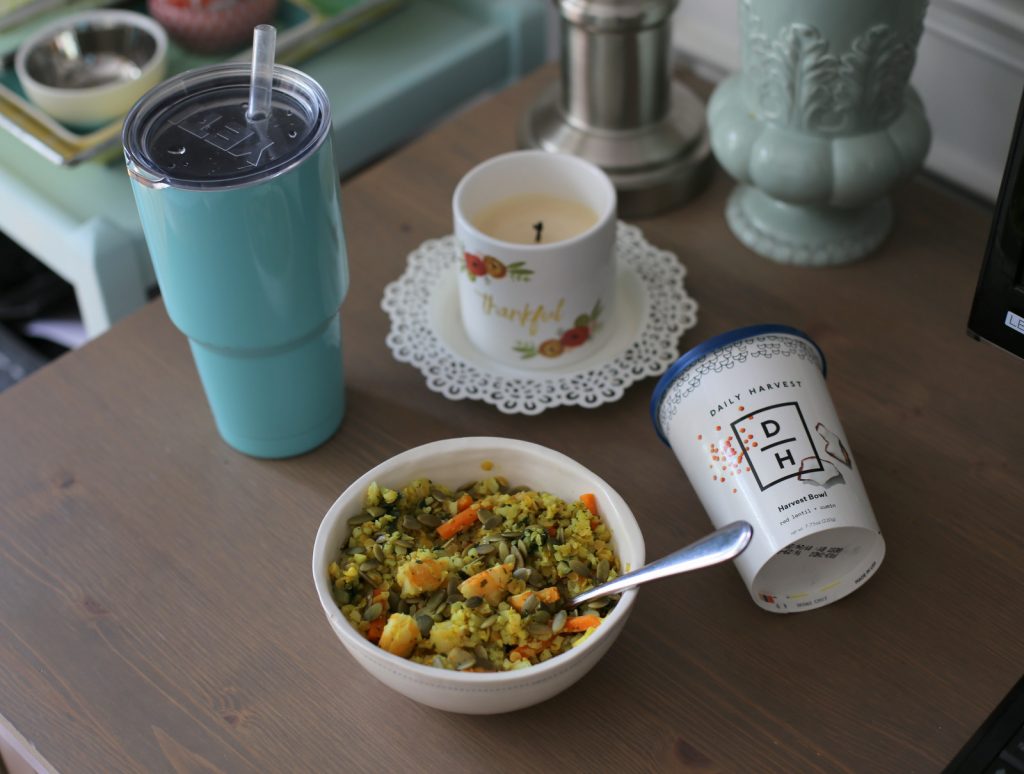 (FYI you can use the code pbfingers to get three free cups on your first Daily Harvest order if you want to try it out!)

After I was done eating, I loaded Ryder into his car seat and the two of us picked Chase up from preschool before making our way back home. I let Chase unwind and play in our family room for a bit while I nursed Ryder before corralling everyone upstairs in Chase’s room for a nap time picnic. (I told you guys I do this ALL the time! So random but it works!)

Once Chase was down, I brought Ryder into our bathroom and put him in his Dock-a-Tot so I could grab a quick shower before I nursed him and put him down for a nap, too. With both boys sleeping, I made myself a bowl of oatmeal with peanut butter (random snack but I was starving) and then began typing up this blog post. I ended up having TWO hours of time to work in the afternoon yesterday which felt like such a gift from my guys! It wasn’t fully uninterrupted (Ryder isn’t the most solid napper) but it still felt amazing to have time in the middle of the day to wrap up a future blog post and continue to chip away at my inbox.

Ryder was up before Chase and once he was done nursing, he seemed content to hang out with me in the kitchen in a little bouncer seat my friend Lauren gave me at preschool pickup yesterday. Ryder LOVES the bouncer seat in Burn Boot Camp’s childcare and since Lauren is doing a massive purge of baby things, she asked if we wanted her old one and I jumped at the offer. Ryder is a huge fan!!

With Ryder happy in his new bouncer seat, I quickly assembled dinner which looked like chickpea pasta paired with kale and shrimp. (I loosely followed this recipe from Clean Eating Magazine.) 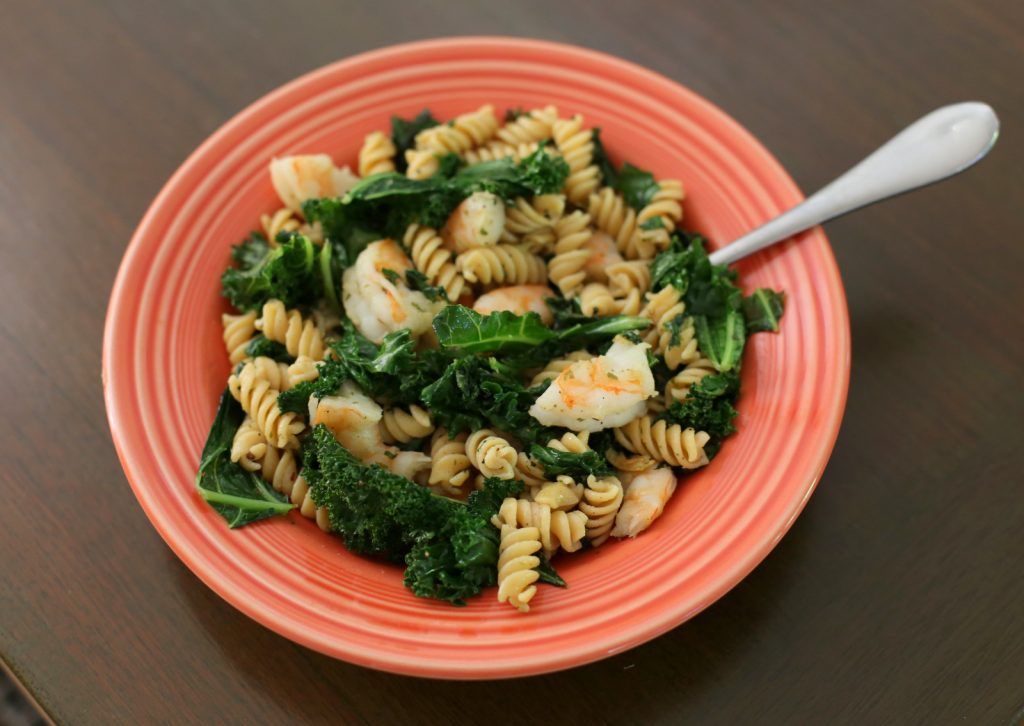 We haven’t had the chance to get to the grocery store yet this week but I cooked up a big bag of shrimp we had in the freezer on Monday which worked well as a quick protein source in both my lunch and our family’s dinner. Freezer food for the win!

Chase woke up from his nap right around the time that we had a package delivery at the door. He was excited to thank our favorite UPS man (he’s practically a family friend at this point) and we immediately opened the large box to find the new comforter I ordered for our master bedroom. 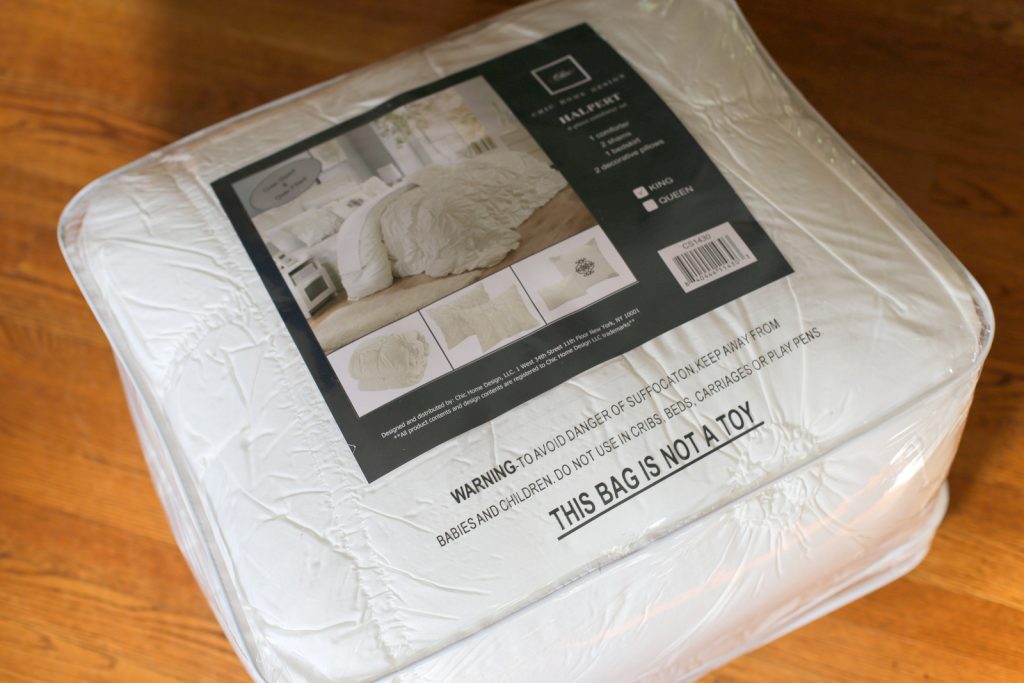 I’m excited to see how it looks but sliiiightly concerned Ryan may veto this particular design choice and say it’s too frilly for his taste. We’ll see!

We spent the rest of the afternoon at home splitting time between our backyard where Chase “helped” clear our patio of debris from the weekend storm (thank you Aunt Laurie for his sweeper brush!) and our kitchen where we made a new batch of chocolate energy bites with dates, oats, peanut butter, flax seed, honey and cocoa powder. 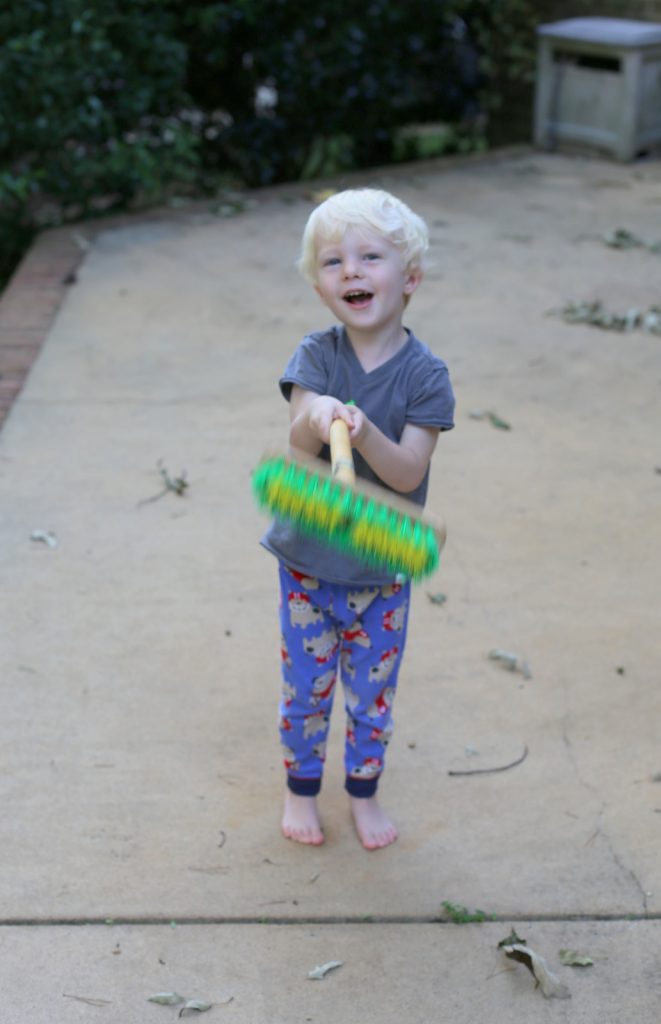 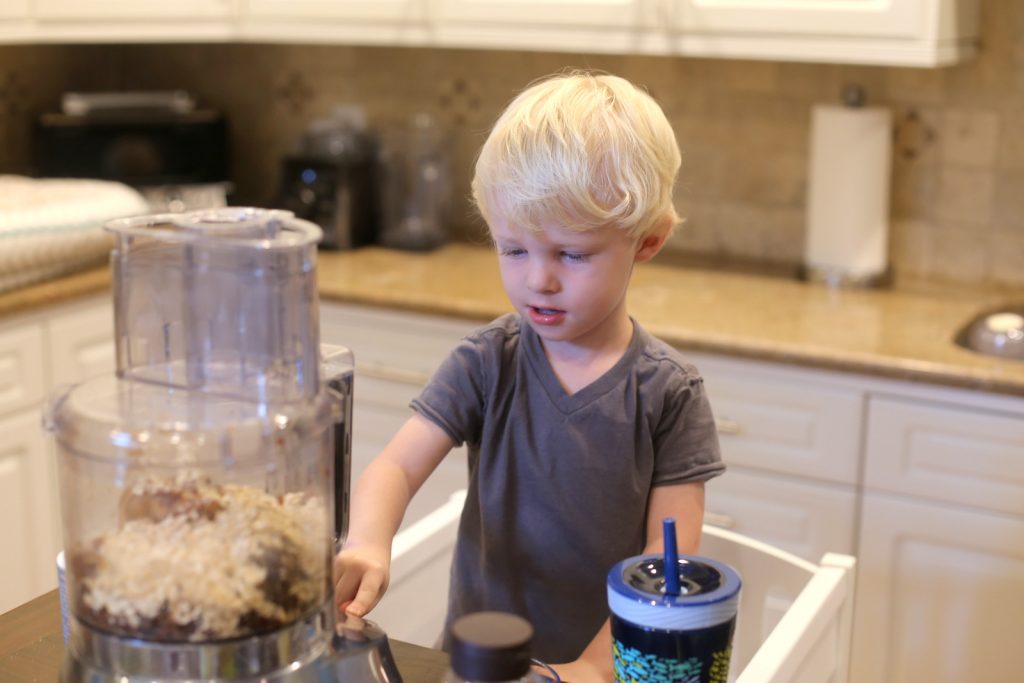 Since Chase took a longer nap than usual yesterday, he was amped around dinnertime and had no interest in settling down to eat. He was also pretty content to play by himself with his toys and since this coincided with an evening cat nap for Ryder, I decided to roll with it and took advantage of the time to clean up the kitchen. Ryan arrived home a little after 7 p.m. and after a quick round of soccer with Chase, we all settled down for dinner. I reheated the pasta I prepared earlier in the day and we dug in!

Eventually we made our way upstairs and did the whole bed time routine. We finally had both boys asleep around 8:30 p.m. Ryan and I chatted for a bit before we were both ready to call it a night. I read my book until my eyes could no longer stay open. (I’m currently reading Total Control by David Baldacci. I like the story line and look forward to reading it at the end of the day but there’s something about the way the author refers to the main female character that irks me over and over again.)

Today should be a good one over here as Chase has the day off from school and we have some fun plans with friends at a local park on the agenda this morning! I hope you all have a great Wednesday and I hope to see ya back here tomorrow for a yummy recipe I have coming your way!