Navigation
On Monday afternoon, I caught a flight to Harrisburg, Pennsylvania for a super-short blogger trip with Hershey. (Fun fact: I was actually born in Harrisburg!) I was already back in Charlotte by 10 p.m. last night, so the trip was a quick one, but it was a blast and jam-packed with chocolate. It was basically heaven for my sweet tooth!

Arriving in Pennsylvania brought me back to the days when my family and I would fly to Harrisburg when we’d visit my grandmothers in Gettysburg. It’s a small airport so I felt lucky to be able to nab a non-stop flight both ways. After several years of flying in and out of the Jacksonville airport (which was located two hours from our house in Ocala), travel just got much easier since I can now leave out of an airport located within 30 minutes of our apartment and have the option to take non-stop flights much more frequently. It feels like such a treat!

With the exception of a 40-minute delay on my return flight last night, travel was relatively seamless and I landed in Harrisburg with a grumbling stomach. I checked into my room at the Hershey Lodge and within 10 minutes flew out the door to meet up with our group for dinner. 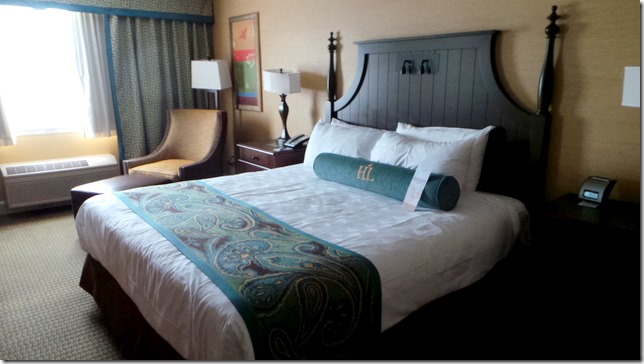 I’m not sure if I just live under a rock or something, but I had no idea that two Hershey-branded hotels and a whole Hershey-themed theme park exists! What!? Of course I knew Hershey headquarters were located in Hershey, Pennsylvania, but I was totally unaware that there is an amusement park and Hershey hotels.

The Hershey Lodge was comfortable and featured lots of Hershey touches, including subtle HERSHEY’S KISSES wall paper and sheets and cocoa shampoo and lotion in the hotel bathrooms. (They smelled amazing!) 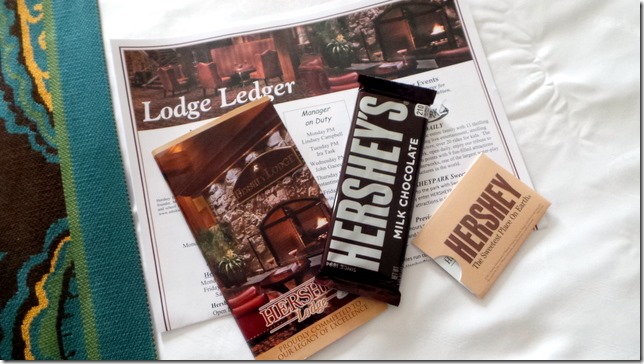 And yes, you do get a full-size HERSHEY’S Milk Chocolate bar when you check in. Score!

I didn’t have much time to look around my room before I had to head to the lobby to meet up with our group for dinner at Devon Seafood Grill. I was reunited with Kath whom I first met back in 2011 at the Healthy Living Summit! 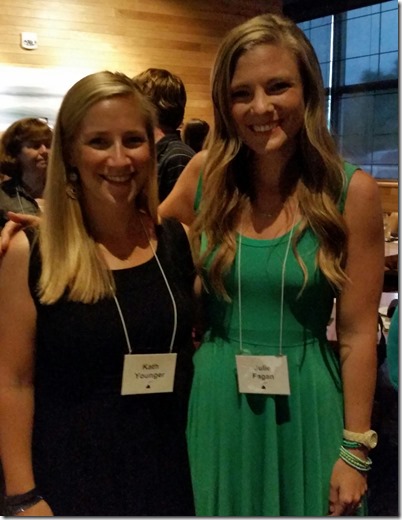 It was great to see her again and meet the other bloggers on the trip as we sipped wine and mingled with the folks from Hershey who joined us for dinner. 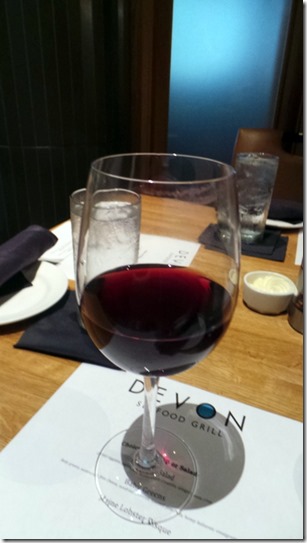 Dinner began with a simple salad and I opted for the grilled mahi mahi for dinner. 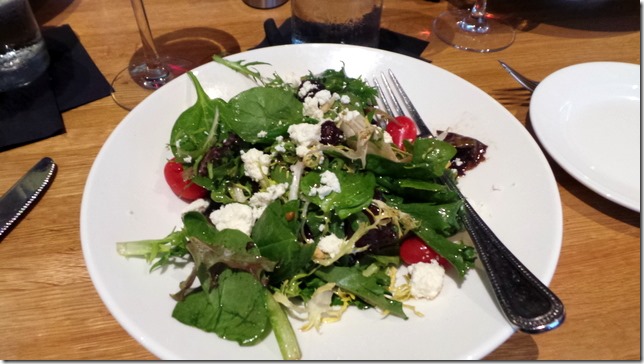 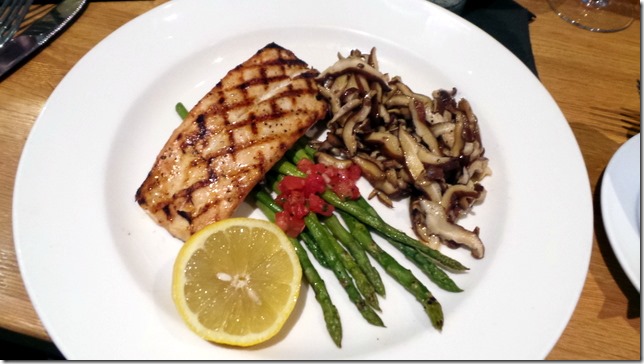 The mushrooms on the side absolutely stole the show. They were smoky and buttery and I already emailed the restaurant to see if they’d be willing the share the recipe.

Following dinner, our group walked to THE HERSHEY STORY where we went on a quick tour of the museum and learned a little bit about the history of Milton Hershey and The Hershey Company. The part of the tour that seemed to interest our group the most was the timeline of Hershey products. 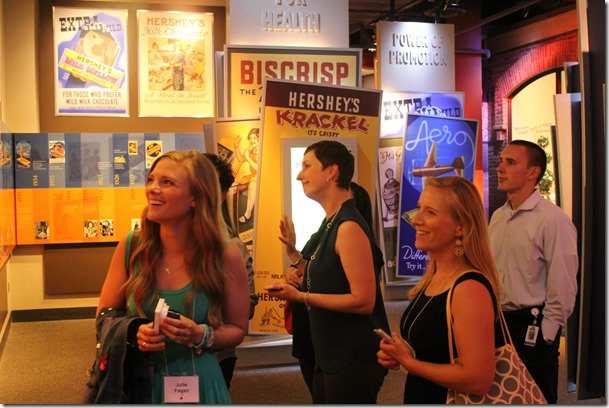 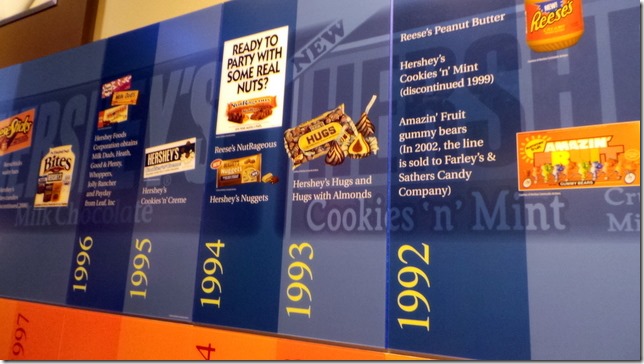 It was neat to see when certain candies debuted and when others were discontinued. In case you were wondering what Hershey’s most popular product is, their REESE’S Peanut Butter Cups are number one. I wasn’t too surprised about that one! (And yes, the REESE’S Peanut Butter Eggs at Easter do have more peanut butter in them! I knew it!)

Before calling it a night, we had one more activity on the agenda. A chocolate tasting at The Chocolate Lab! 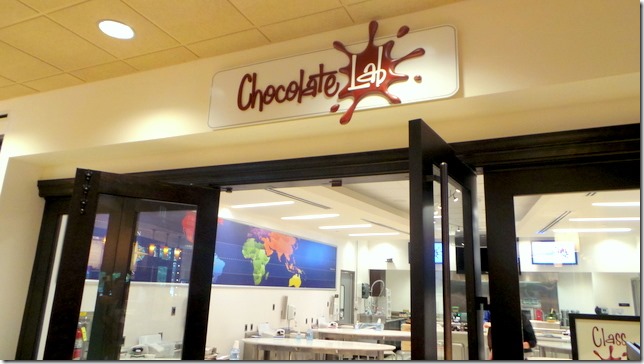 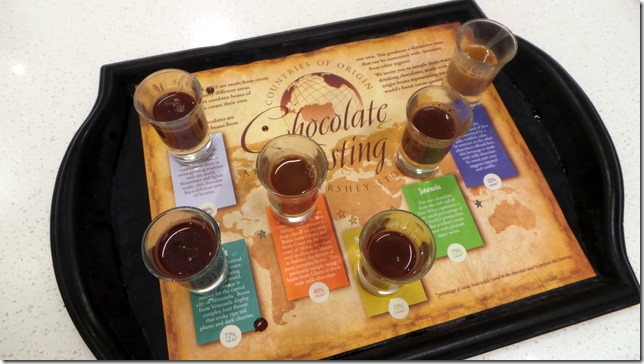 This experience is open to the public at THE HERSHEY STORY Museum and if you’re ever in the area, you must do it!!! It was such a neat way to learn more about the various cacao beans located around the world and their flavor profiles. Plus, you get to drink chocolate.

The two standouts for me from the tasting included the chocolate made from cacao beans from Venezuela and Java, but there wasn’t one I’d refuse in the bunch!

Once the chocolate tasting concluded, we  were done for the evening and since it was only 8:30 p.m., Kath came to my room and the two of us watched The Bachelorette together! It was fun to watch the show with someone else who has been watching this season even if the episode itself wasn’t all that great.

Part two of my whirlwind trip to Hershey is coming up soon!

Disclosure: This blog post and my trip to Hershey, PA were sponsored by The Hershey Company as part of my participation in their Food Ambassador program. All thoughts and opinions are my own.

« What Do Dietitians Eat?
Pure Barre: One Month Results »