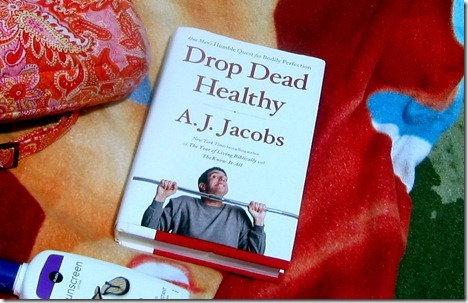 Just in case you’re looking for some summer reading material, you may find additional PBF book reviews and discussions on the Books page.

Drop Dead Healthy details author A.J. Jacobs’ two-year quest to be the healthiest person in the world. Jacobs takes readers along his hilarious ride as he consults fitness and nutrition experts, takes a variety of fitness classes, works with a personal trainer, attempts various diets and more, all in the name of being healthy.

According to Jacobs, his book is about “an out-of-shape guy who tests all the medical advice in the world to see what works and what doesn’t, in hopes of becoming the healthiest person alive.”

As someone who feels like there’s an overwhelming amount of information out there about what is “healthiest,” I was really intrigued by this book and couldn’t wait to see what a journalist (Jacobs is the editor at large at Esquire) would find when he poured hours into serious research regarding fitness and diet trends.

What I didn’t expect was to laugh!

Having never read Jacobs’ previous two memoirs where he details his experiences reading the entire encyclopedia and his attempt to live biblically for one year, according to the moral codes detailed in the Bible, I didn’t realize that a big part of his writing style is the use of humor. He literally had me laughing out loud and reading excerpts of the book to Ryan because they were so amusing.

While the book had a lot of interesting facts and research findings, it was the way the author added humor to the facts that I enjoyed the most.

“The evidence is solid that pets are good for humans’ health. A study by the Mayo Medical Center found that dog owners had significantly lower cholesterol. A study by the Minnesota Stroke Institute said that people who owned cats were 30 percent less likely o suffer a heart attack (though 40 percent more likely to engage in scrapbooking).”

The way the author conveyed his wife’s reactions to some of his “experiments” also had me cracking up. (When he decided to stop calling his wife “sweetie” because it glorified sugar and tested the nickname “savory,” I laughed out loud.)

Aside from laughing and simply enjoying the book from an entertainment perspective, I found some facts alarming and took away some health-related tidbits from the book.

Here are a few I thought you guys might find amusing:

I really enjoyed this book. It was a nice break from fictional books and I looked forward to spending time laughing with Jacobs whenever I opened the book.

Additional reviews of Drop Dead Healthy may be found on the following blogs: