Navigation
Hello! I am currently blogging from a train that is taking us from Cusco to Aguas Calientes. We’ll be spending tomorrow at Machu Picchu but up until now we’ve spent all of our time in Cusco, Peru.

We arrived in Peru late on Friday night and spent the evening in Lima before catching an early flight to Cusco on Saturday morning. Our time in Lima was short-lived, but I did receive quite the warm welcome from some pretty awesome folks. 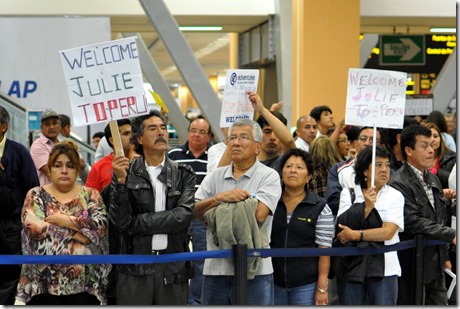 Welcome signs and everything!? Aw, shucks. Thanks guys!

Okay, so those people had no idea who I was, but we got a kick out of my pretend welcome committee. One person everyone at the airport did seem to know was a young  man who was on our flight. When he walked into the area where everyone’s loved ones were waiting, he was swarmed by a ton of screaming young girls. Apparently we flew with quite the celebrity and didn’t even know it!

Our time in Lima was rather brief and, after a delicious breakfast, we headed back to the airport to catch a morning flight to Cusco.

At breakfast, we all made sure to drink a couple of cups of coca tea, which is believed to help with altitude sickness. 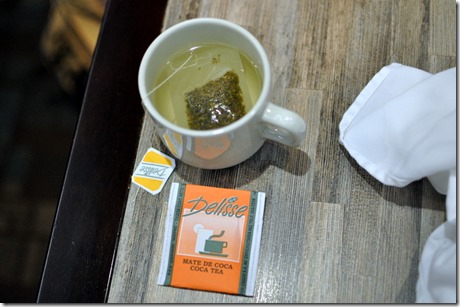 It was quite hot. 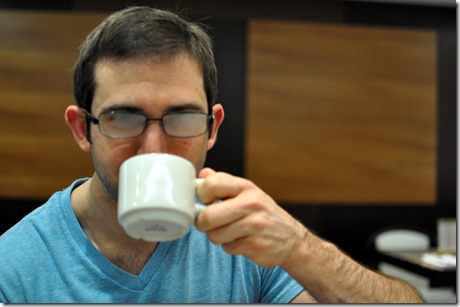 After breakfast, we boarded a bus that took us to the airport. All of the logistics of our trip were arranged through the travel company we used, Samay Adventures. We have been so impressed with their attention to detail and I must give a big shout out to Dayanna! 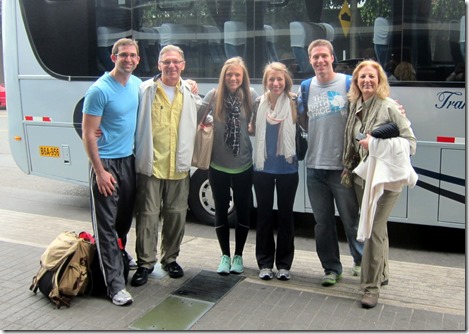 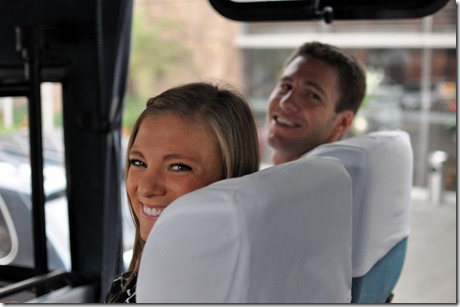 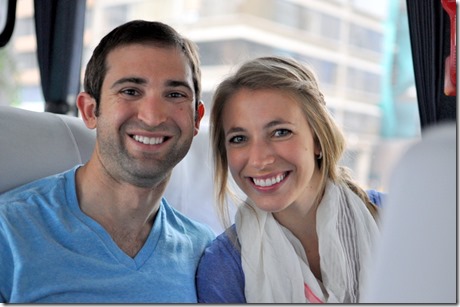 Our flight to Cusco lasted about an hour and once we landed, we immediately headed into a bustling square for lunch at La Retama. (We also did a quick-change in the car and put on shorts because it was much warmer than we anticipated.) 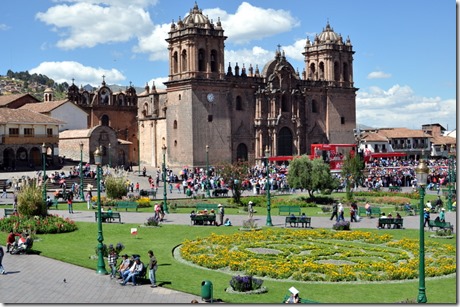 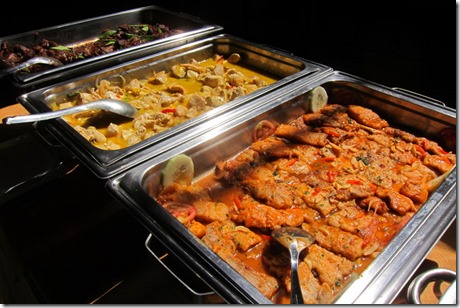 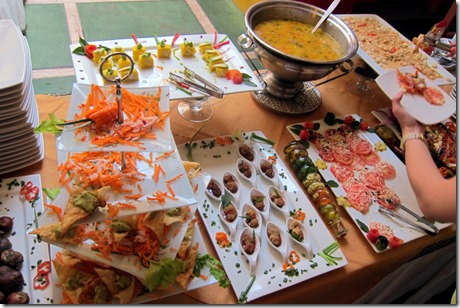 We all agreed the ceviche was the star of the delicious lunch buffet.

After lunch, we met up with a small group of people for an afternoon tour of Cusco that began at a stunning cathedral that was built in 1560. 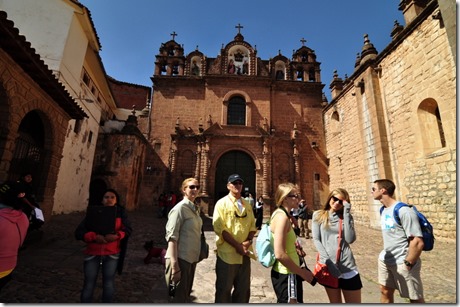 Unfortunately pictures were not allowed inside, but we were able to snap some photos at our next destination, the temple of Qoricancha.

On the walk to Qoricancha, we were shocked to see alpacas and llamas in the street! As our tour around Cusco continued, we realized that they are everywhere in the city. 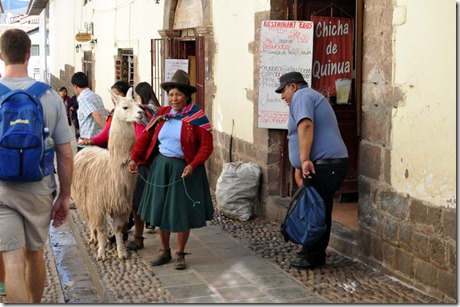 After you take a picture, the women or children guiding the alpacas or llamas immediately approach you asking for tips. We learned that little tidbit fast!

Our tour guide for the day did a great job highlighting the interesting aspects of Qoricancha, including the impressive design of the structure. The temple was once called Inti Kancha (Temple of the Sun) and was the most important temple in the Inca Empire. 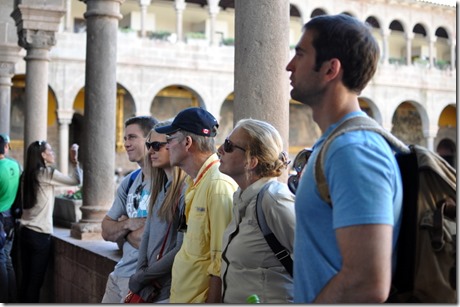 The walls of the structure were built at an angle, so it would collapse outward instead of inward should an earthquake occur and cause it to fall down. 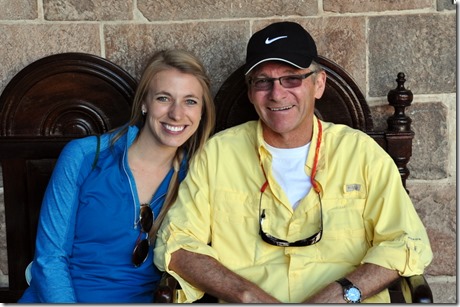 Everyone in our group made sure to snap pictures of the three perfectly chiseled windows that allowed you to look through to see visitors on the other side. 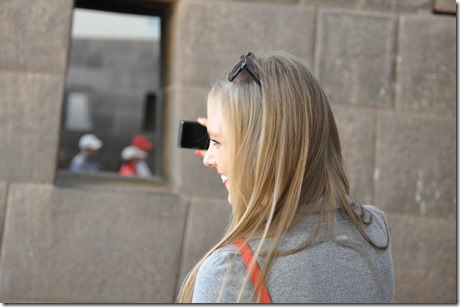 Can you see me and Ryan? 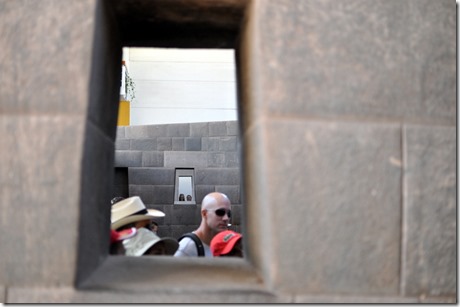 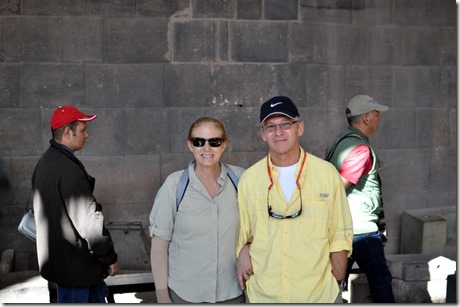 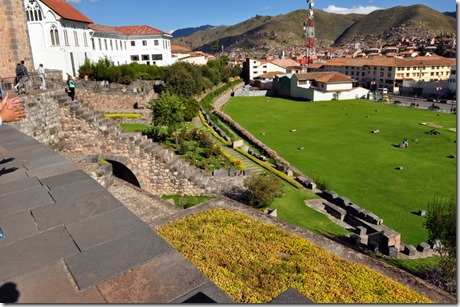 Our next stop took us to Saqsaywaman, which was easily my favorite destination of the day. 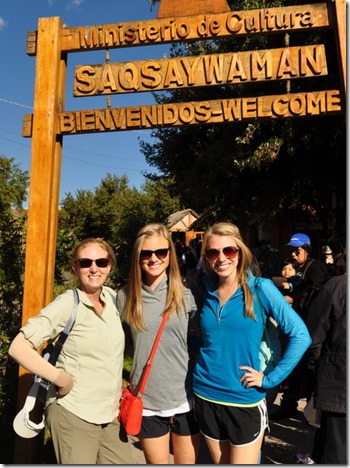 Our guide told us that the name Saqsaywaman was not the original name and evolved over time. He said that because of the way tourists pronounce Saqsaywaman, someday it may morph into the Sexy Woman ruins. Ha! 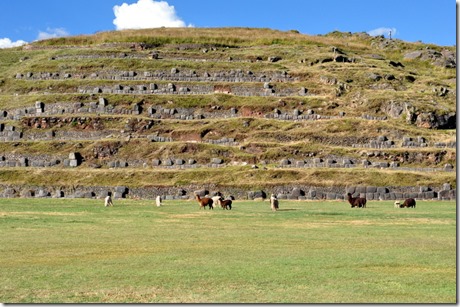 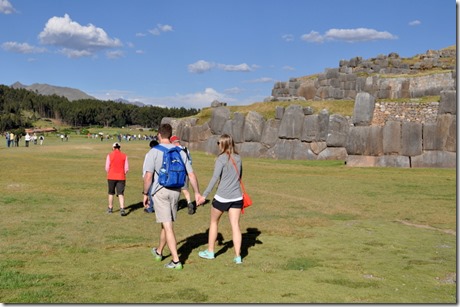 We didn’t have a ton of time at Saqsaywaman (I was really hoping to do the rock slides!), but we enjoyed listening to the stories our guide told as after he encouraged us to relax in the grass. 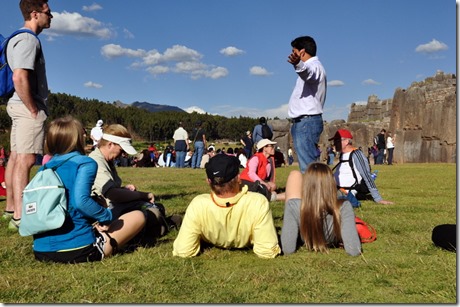 After a day on the move, hanging out in the plush green grass felt like heaven.

I was so impressed when I learned that the large stone walls were made of boulders that were precisely cut by the Incas and put together without mortar. They were placed together so tightly that, in many cases, a piece of paper cannot fit through the rocks. 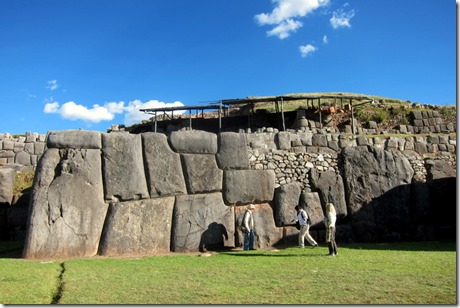 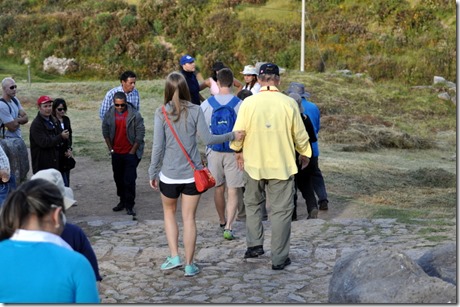 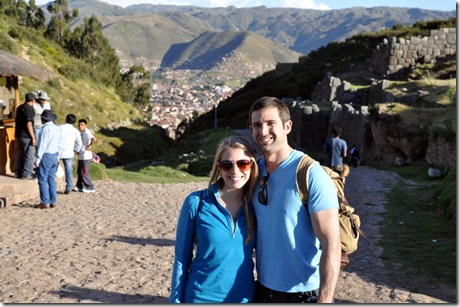 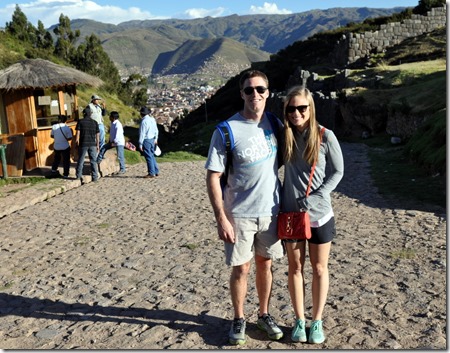 Our next stop was a rather short one and too us to Q’enko, a temple dedicated to Mother Earth that was a center of celebrations and astronomical studies. It has numerous ceremonial carvings, holes and canals cut into the rock and includes an underground chamber. 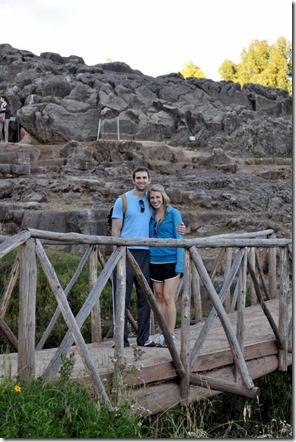 For our final stop of the day, we explored Tambomachay (Water Temple), a site that was once used as a center of worship to the water. Right before we boarded the bus to Tambomachay, we we purchased choclo, the best corn I’ve ever tasted in my life. The kernels were giant! 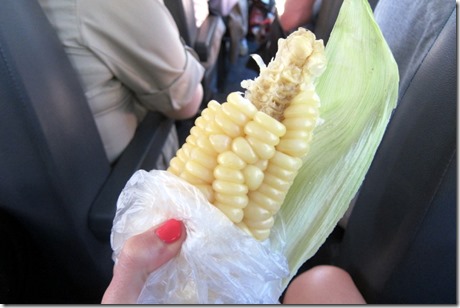 It was sweet and incredibly addicting. We ended up buying more at Tambomachay!

Tambomachay was a beautiful place with water flowing from a sophisticated system of aqueducts and canals. 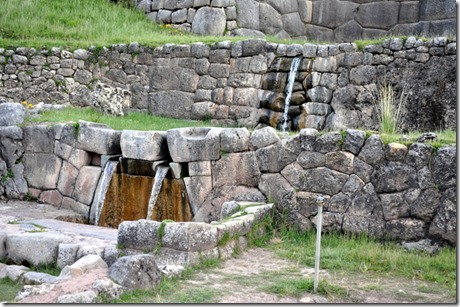 Our guide told us that the water coming from the stream is said to bring fertility and that many women drank from the water in hopes of having a child. It was the perfect final stop on our tour, especially since my mom and sister were hit with some serious altitude sickness on the bus ride back to our hotel. I felt awful for them!

Fortunately everyone woke up feeling 100 percent better and today was full of fun without any sickness. Thank goodness!

I hope to be back soon with a recap of our second day in Cusco. I hope you guys had a great weekend!