The final day of our cruise was a “Fun Day at Sea,” meaning we were held captive on the Carnival Sensation and forced to eat, drink and play random cruise games. 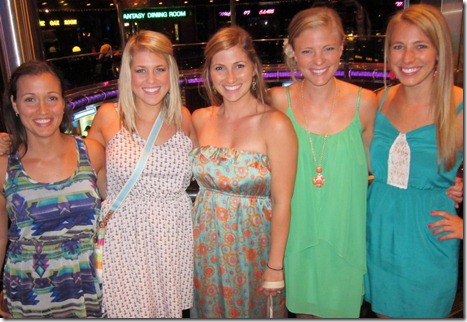 Who knew captivity could be so enjoyable?

Since most of our group members were recovering from Friday’s booze cruise and eventful formal night, most of us took the fun day at sea rather easy which wasn’t too hard since the weather was very dreary.

Even though it was drizzling outside, our group still gathered on the Lido Deck and hung out by the pool underneath the awnings by the bar. We read magazines and chatted the day away. My friend Leah is getting married in October so there was lots of wedding talk going on!

Lunch aboard the ship was enjoyed buffet-style. 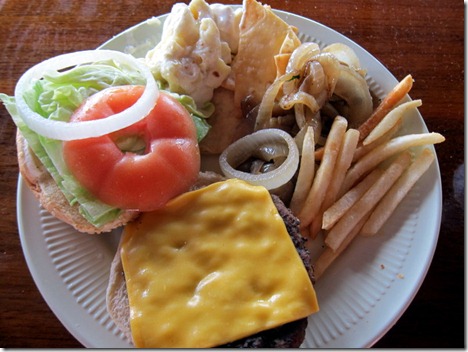 I was in a burger mood and got a cheeseburger which I ate with a side of fries, caramelized onions (my favorite!), macaroni salad and tortilla chips, followed by the obligatory soft serve cone.

I kept a schedule of the cruise activities offered by Carnival for the day in my bag and after lunch scanned the agenda to see if any activities sounded like fun. In the end, a few of us opted to participate in trivia and Scattergories aboard the ship which was entertaining.

They weren’t too picky when it came to the use of adjectives in Scattergories, so for a “clothing item” for the letter “p,” our group came up with this little gem:

Sadly a victory eluded everyone in our group. We didn’t realize the use of adjectives was okay until round two when we started getting a little ridiculous. It’s much more fun to play with outrageous adjectives!

The final dinner aboard the ship was yet another tasty one! 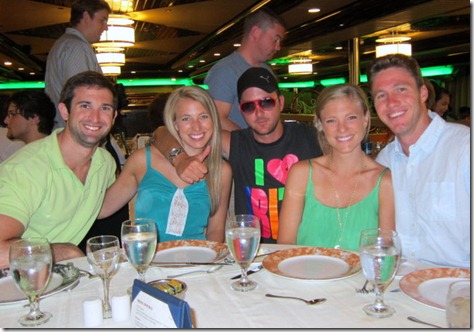 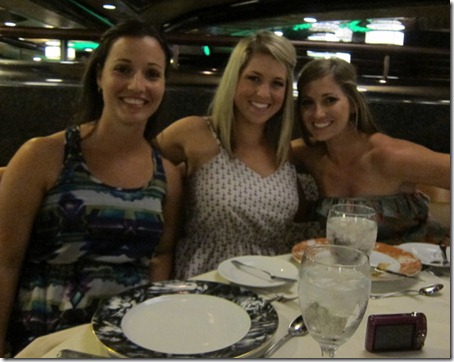 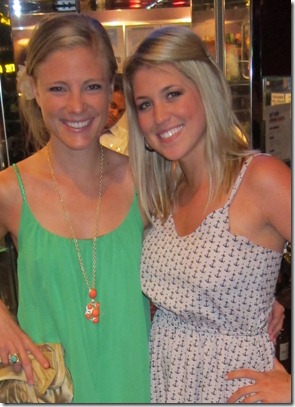 As always, it was a three-course meal.

I began with the sushi trio. 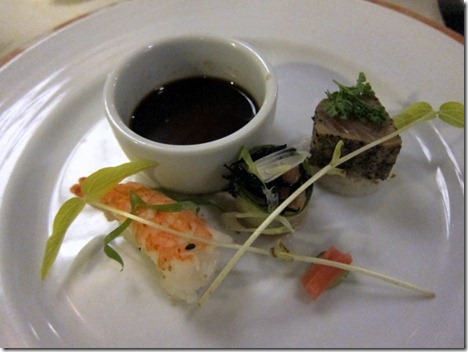 I could’ve easily packed in about five times that amount of sushi since each little bite was so good.

The tuna in particular was fabulous. A few members of our group got a second order of the sushi or another appetizer to share which was great.

For my entrée, I selected the vegetarian dish which included tofu and a fantastic stir fry. 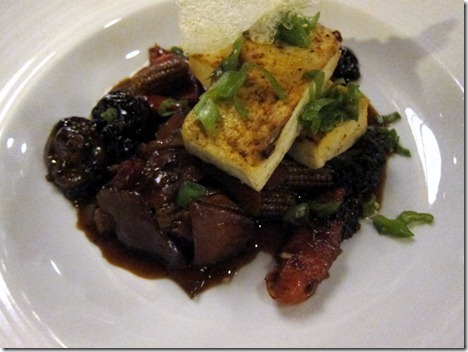 It was really heavy on the sauce which I liked a lot, but I wished it was served with pasta or brown rice to soak up some of the sauce.

Like every night at dinner, the servers entertained diners with singing and dancing and really got into it which made everyone smile, wave their napkins and clap along. 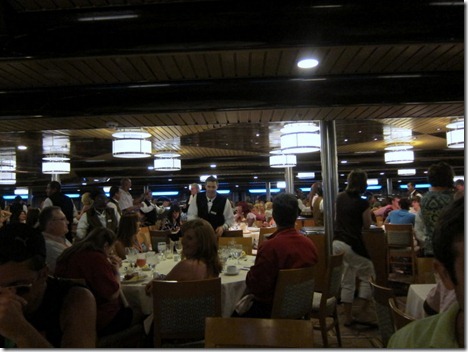 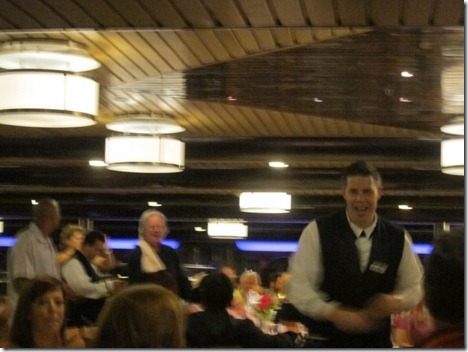 It’s totally cheesy, but as someone who adores the cheesiest things in life, I liked it!

Then it was time for dessert.

I ordered the baked Alaska which was good but not nearly as good as the chocolate melting cake everyone ordered nearly every night on the cruise. 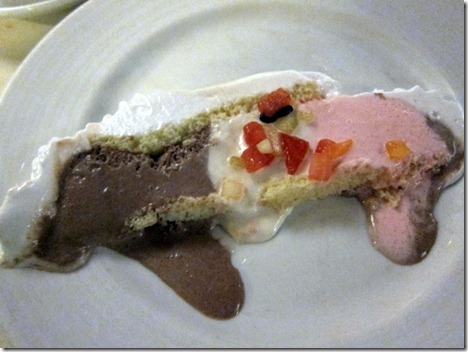 I finished my baked Alaska and was left craving the warm chocolate melting cake, so I ordered a second dessert with a side of butter pecan ice cream. 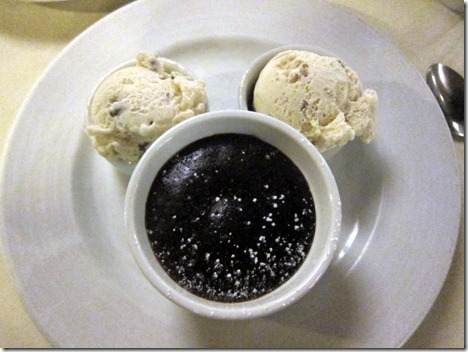 Our group wasn’t too shy about doubling up on any one course, so I didn’t feel ridiculous about ordering a second dessert.

The waiters on cruises are always so kind and even seem to encourage you to try two dishes if you can’t decide. Don’t mind if I do! Ryan and two other guys in our group got two entrees every night!

One of my absolute favorite entrées was the vegetarian sweet potato pot pie from the first night. No one was sure what to think of it when they saw it on the menu, but Ryan had it on a previous cruise and swore it was a winner. It definitely was! 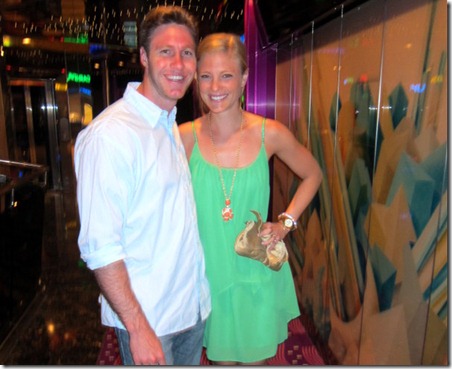 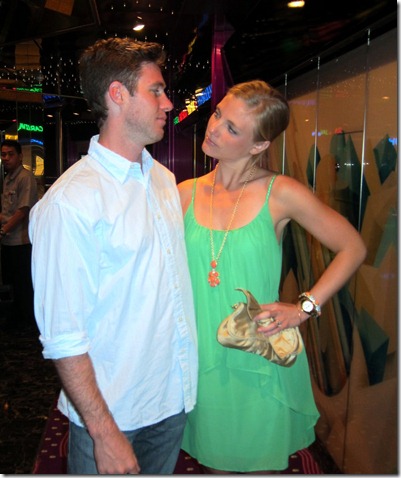 You can dress us up, but you can’t take us out. 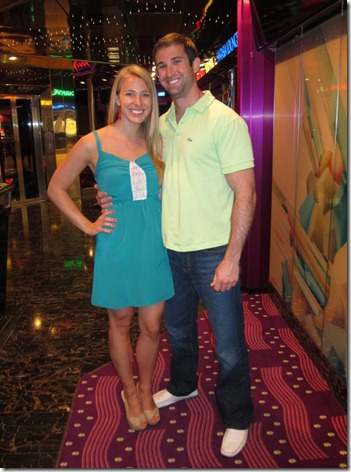 And just like that our weekend cruise was over!

Thanks so much to my friends for making it such a fun and memorable vacation!

« Formal Night: A Vision in Red, White and Blue
The Smell of Sadie »