Navigation
Hello, hello! I hope you are checking in this morning after a few days of relaxing even though I know many of us use weekends to try to knock some things off our to-do lists. Our weekend included plenty of family fun but also a healthy dose of random household chores that were nagging away at us.

Up first: Deep cleaning the fridge! Yep, that was our rockin’ Friday night in a nutshell, my friends. We picked up a big cheese pizza, flipped on some Planet Earth and went to town on our fridge. And they say romance is dead after kids! 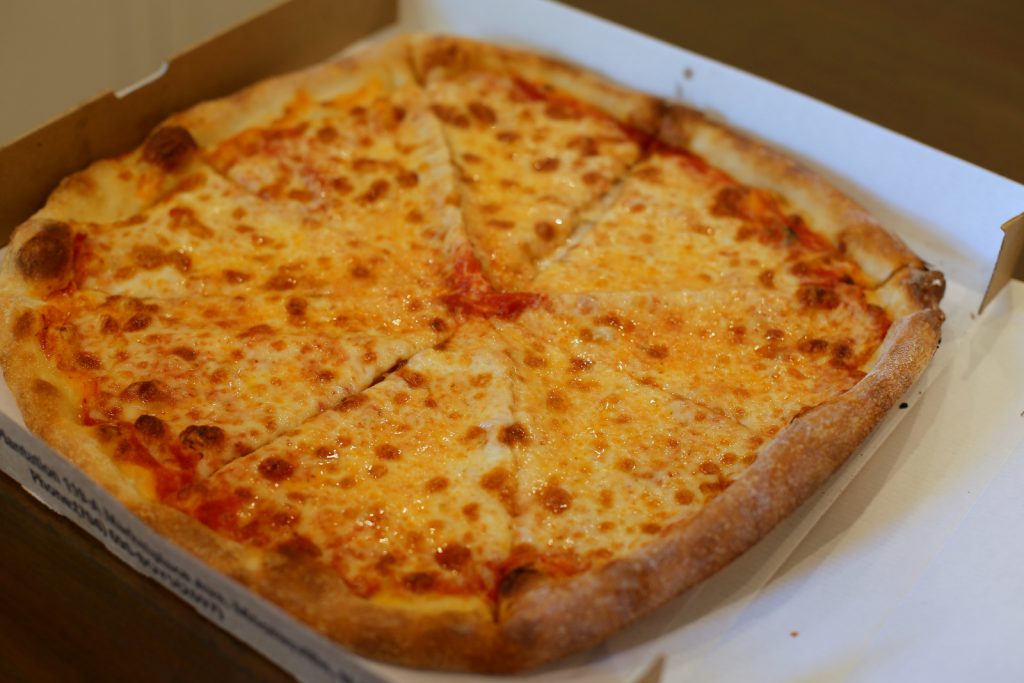 Because I am the kind of person who could look at Before/After photos for hours, here is our fridge BEFORE: 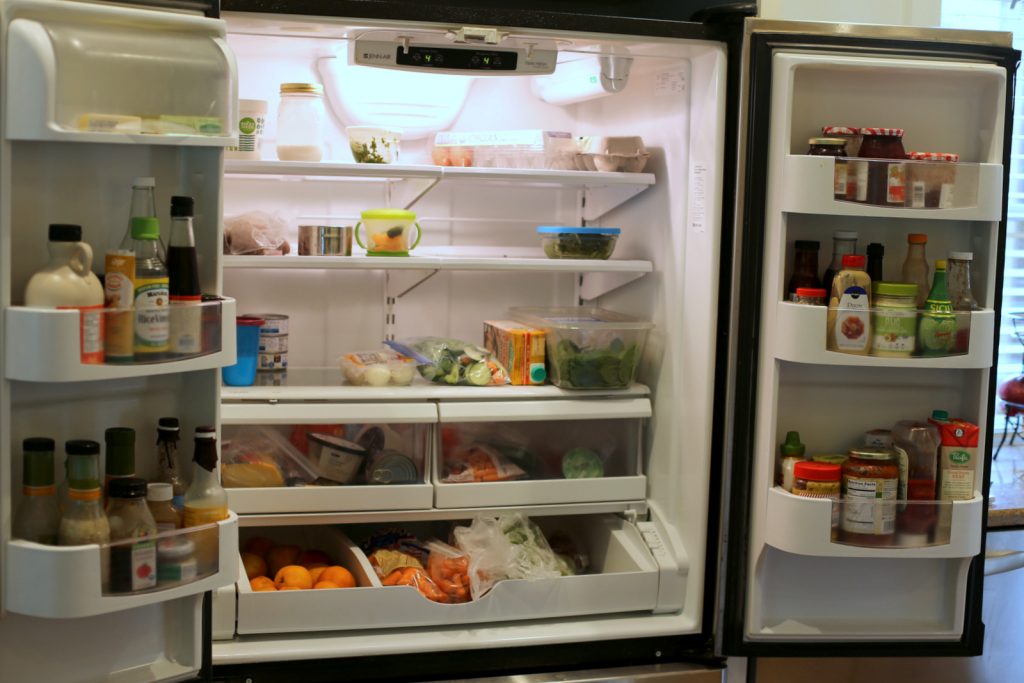 And here’s the AFTER: 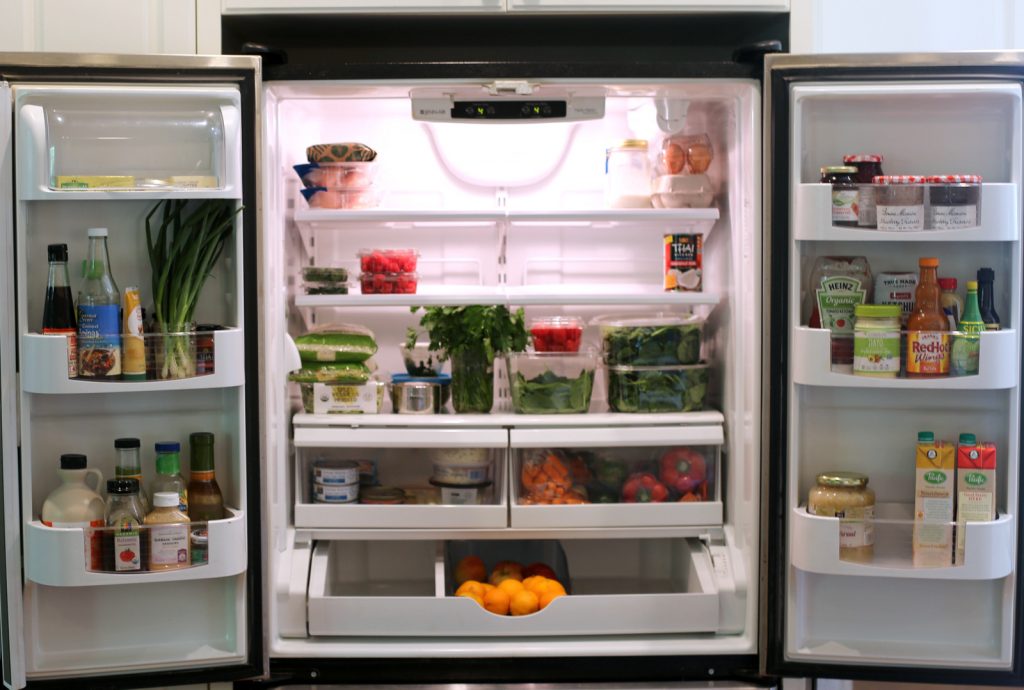 (The after photo also includes some food we picked up to get us through the weekend but this is definitely not our fully-stocked fridge. We also have two refrigerated beverage drawers the previous owners of our home installed right next to our fridge that we LOVE where we store all of our beverages.)

Now that I’ve uploaded the pics, the before/after shots of our fridge may not look that dramatic but what you cannot see in the after photo is the lack of random goo, crumbs and other food particles that desperately needed to be scrubbed and removed from our fridge. It’s like a breath of fresh air when I open our fridge now! (Is this what life is like at 33? Because I’m oddly okay with it.)

Saturday morning began bright and early with cashew coffee (a current fav!), oatmeal and a long family walk. Well technically my Saturday began with cuddles because Ryder had me up a little before 5 a.m. and wouldn’t settle back down, so I pulled him into our bed and he snuggled up against me while I began reading The Last Mile by David Baldacci.

Ryan headed off to the gym at 6 a.m. and was back just before Chase awoke for the day. I nursed Ryder while Ryan got Chase up and dressed so we were all ready for our walk a little before 8 a.m.

We ended up walking the long way to the park in our neighborhood and then spent the morning playing on the playground before circling back home. 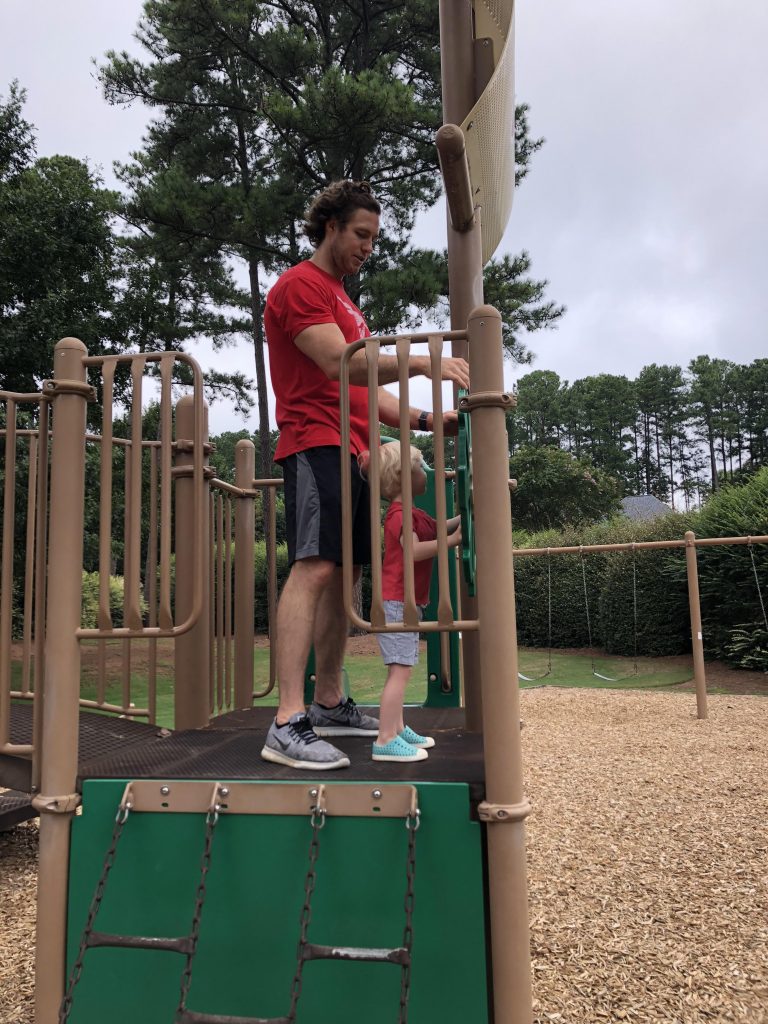 We made it home around 10 a.m. and took an hour or so to eat some snacks, prep some lemon pepper chicken in the slow cooker, nurse Ryder and relax on the couch before heading back out to spend the rest of the morning at Discovery Place Kids so Chase could run around and get some of his energy out before nap time.

Discovery Place was mayhem on Saturday morning but Chase had a ball. I wore Ryder in the Baby K’Tan the whole time and Chase made us laugh when he turned to me and said, “Mom, Baby Ryder is in your belly again?”

By the time we made it home, we were all ready for lunch and dug into bowls of lemon pepper chicken with cilantro lime cauliflower rice, leftover chimichurri (I follow the recipe in Juli Bauer’s Paleo Cookbook and put this stuff on everythinggg) and sliced tomatoes. (While I’d love to say Chase enthusiastically dug into the cauliflower rice, he had leftover pizza with a banana and cucumber slices.) 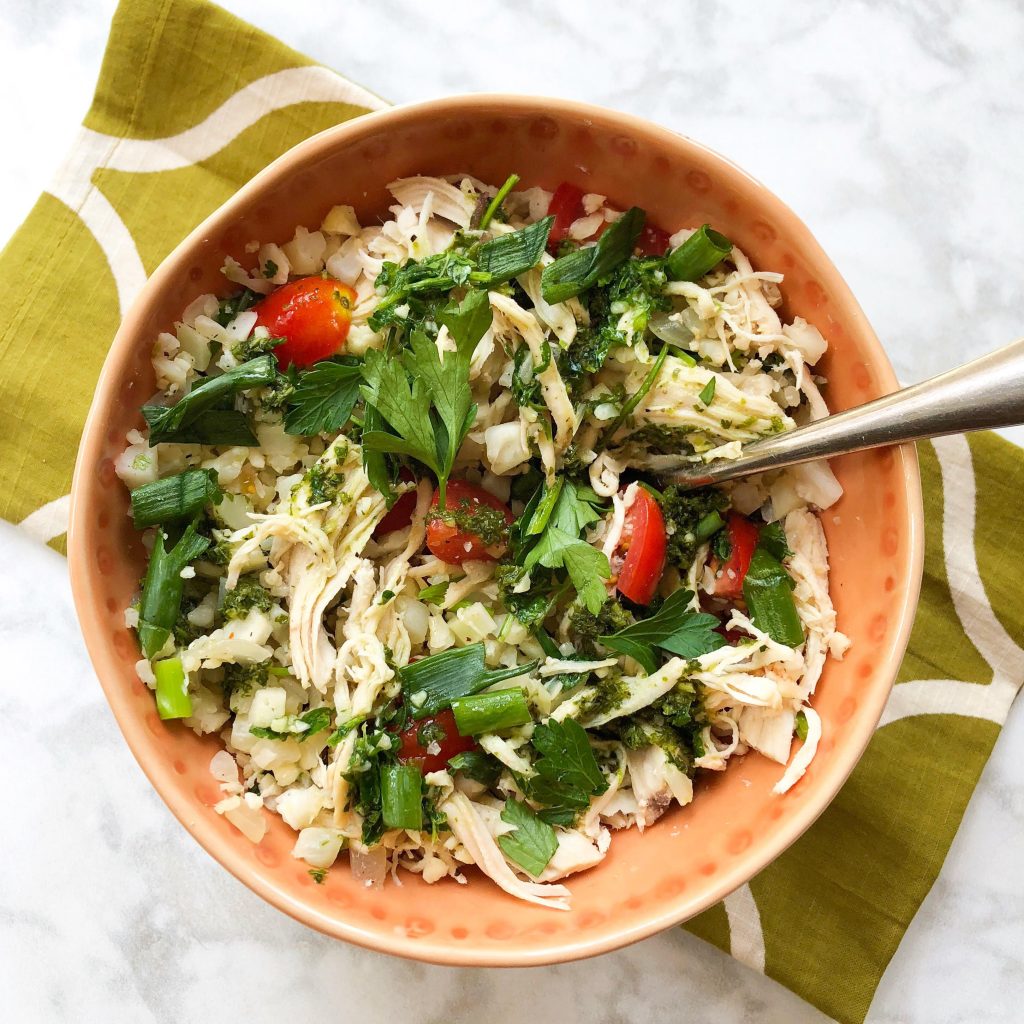 To make the chicken we used in our lunches, I simply combined 2 pounds of chicken breasts in the slow cooker with 1 cup chicken broth, 1 1/2 tablespoons lemon pepper seasoning, the juice of one lemon and 1 teaspoon garlic powder and let it cook on high for four hours before shredding. Easy and tasty!

Ryan put Chase down for his nap after lunch and Ryder was ready for a nap as well and snoozed in his Rock ‘n’ Play. I shockingly had a random burst of energy about halfway through Chase’s nap and made my way into the garage for a short 21-minute workout. I truly cannot remember the last time I worked out after noon (I always say if I don’t work out before noon, it’s not going to happen) but sneaking in a quick workout felt great! 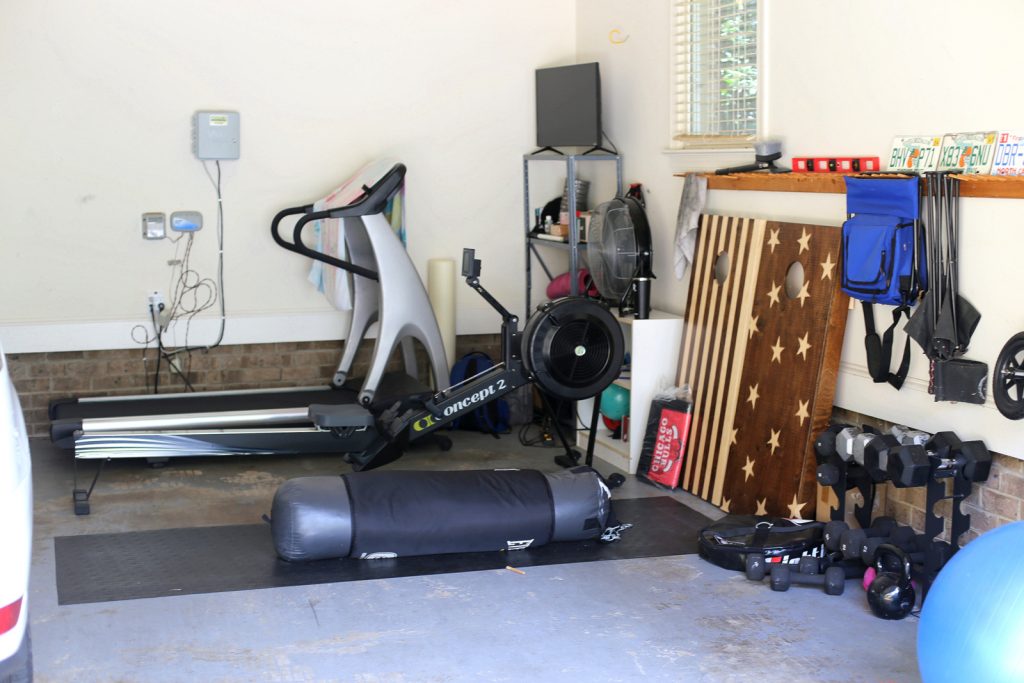 Before Ryder was born, Ryan moved all of our gym stuff out of Ryder’s room so it could become his nursery and into one of the spots in our two-car garage so this is our new set up! Ryan works out in our garage almost every week day before work. Anyway, back to my workout!

On Saturday afternoon, I tackled my first postpartum leg workout and it looked like this: 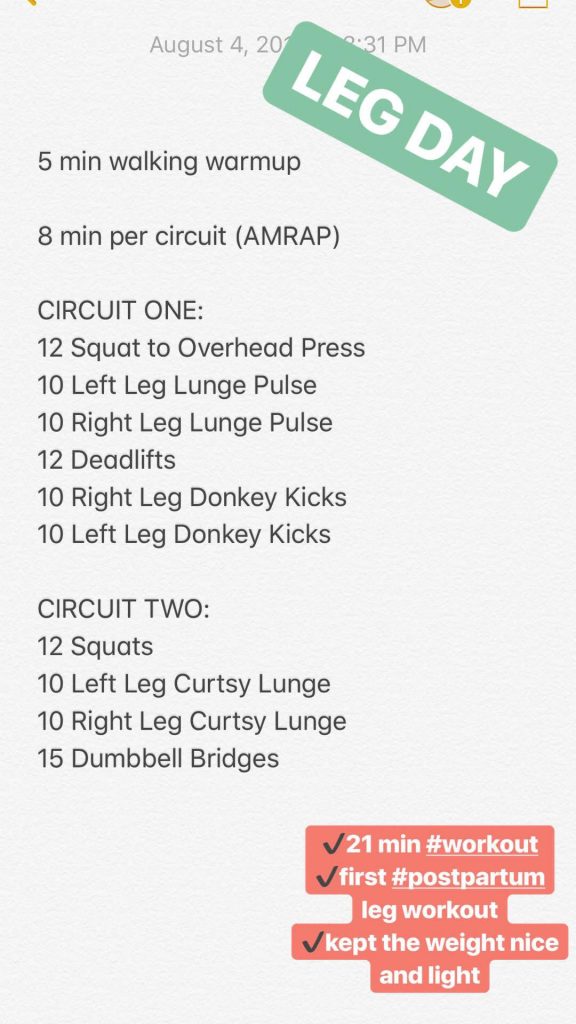 I had time to grab a quick shower before Ryder needed to eat again and then we spent the rest of our Saturday evening at church. 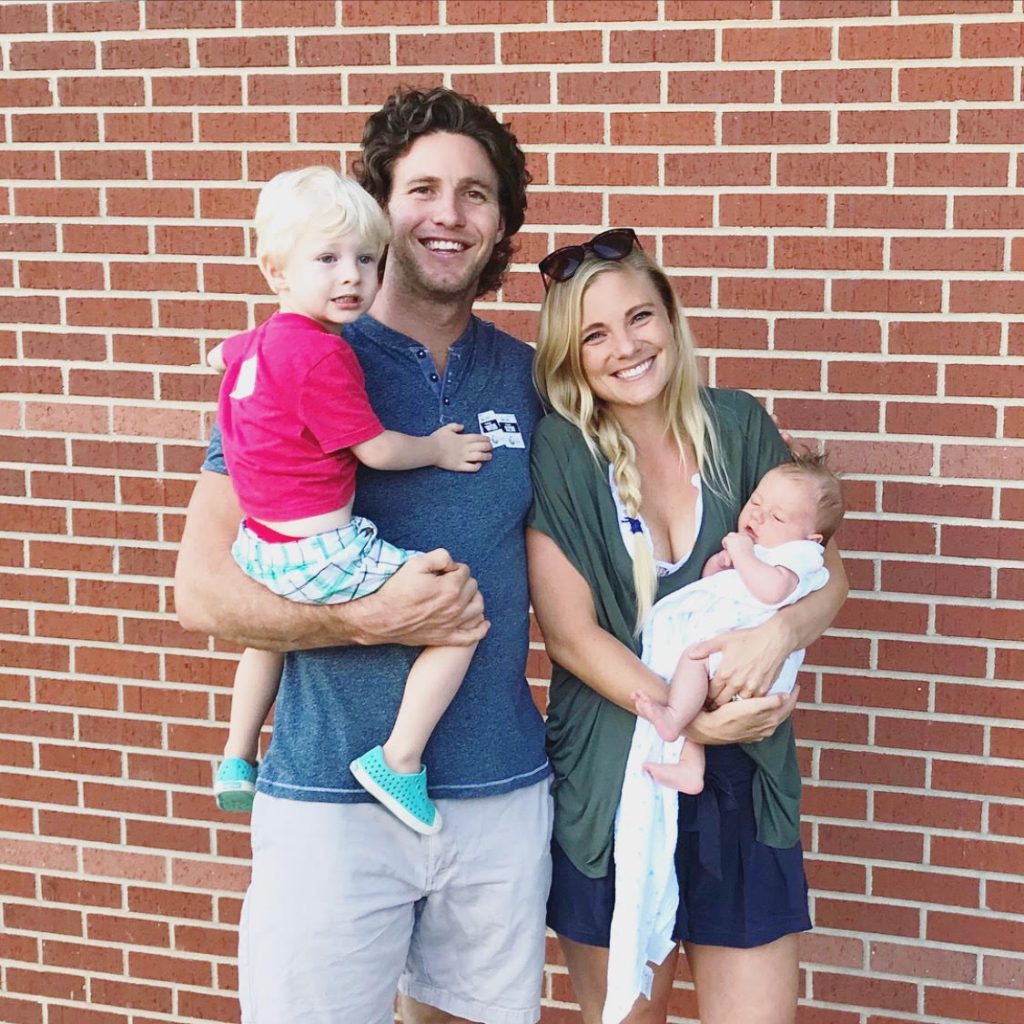 I initially planned to hold Ryder in the nursing mother’s room during the service but since the baby room only had one other baby in it with two childcare volunteers I figured we should take advantage of the one-on-one attention for our little guy and give childcare a shot. 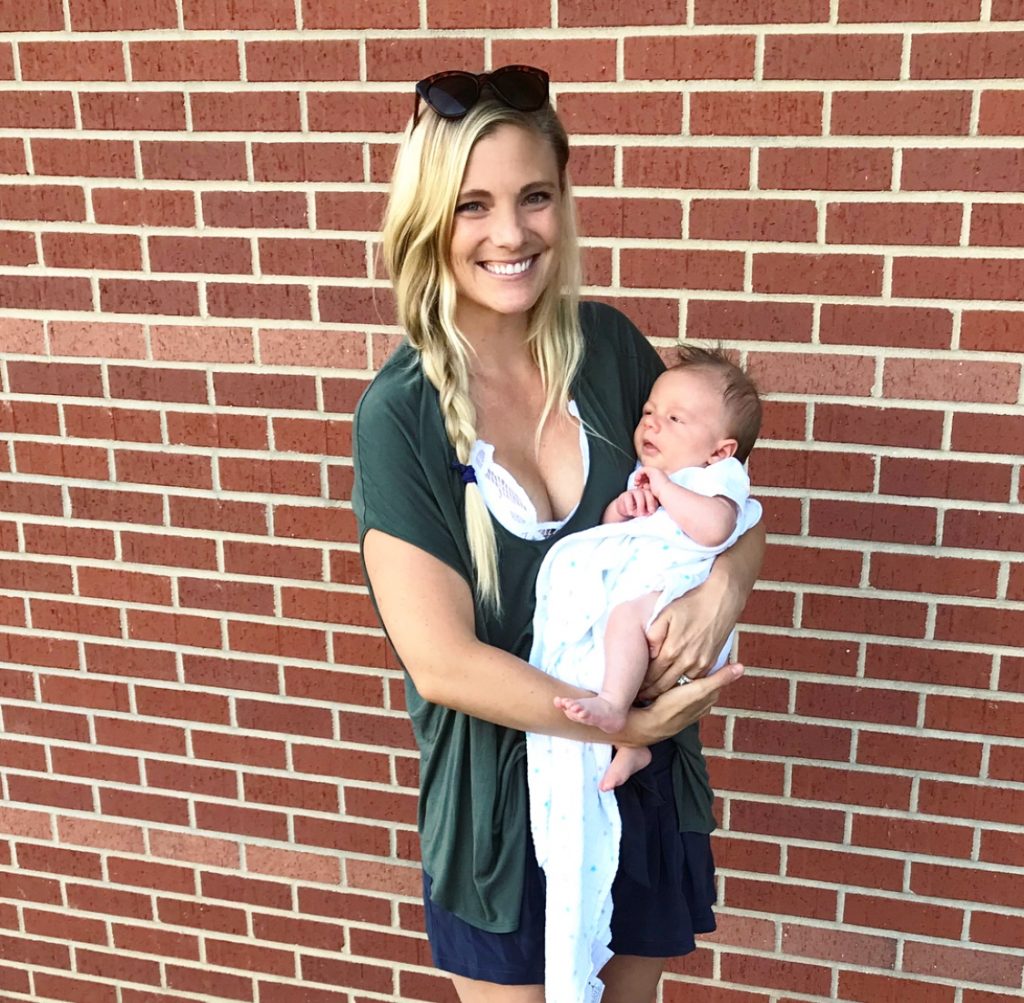 Sunday morning began with another early-morning nursing session but Ryder thankfully went back to sleep for another 90 minutes after a quick 5 a.m. feed. I was wide awake after he ate though and headed downstairs to get some work done before everyone else was up for the day.

Once everyone was ready to get moving, we ate breakfast on the go and made our way to a local beach for some early morning swimming. 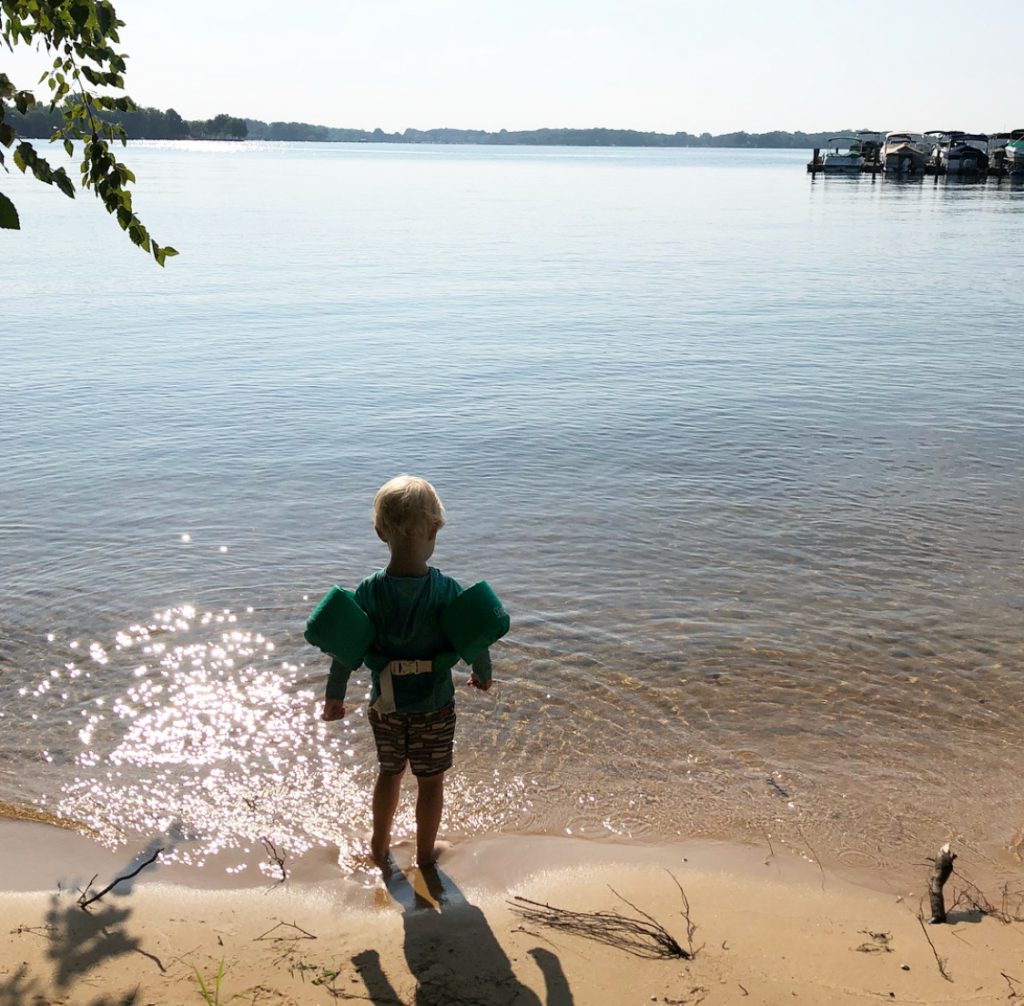 Ryder and I hung out in the shade while Ryan and Chase swam in the lake and hunted for tiny shells. 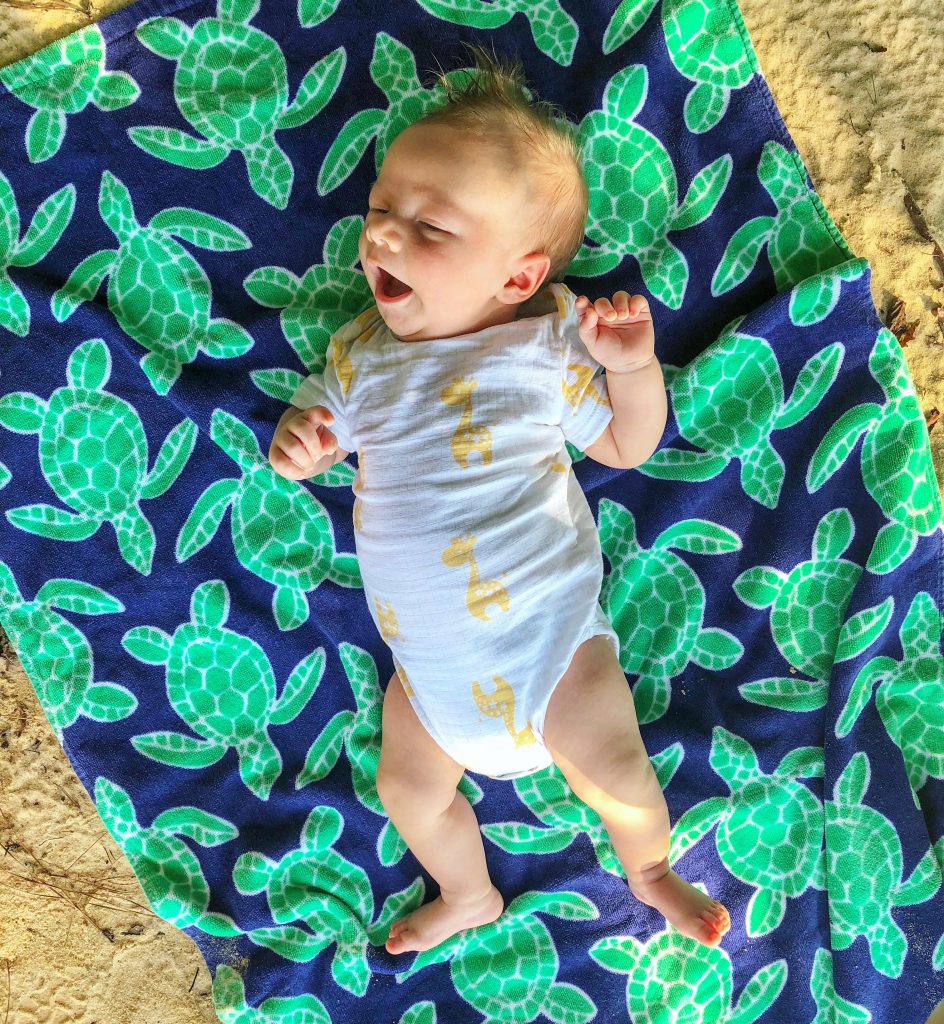 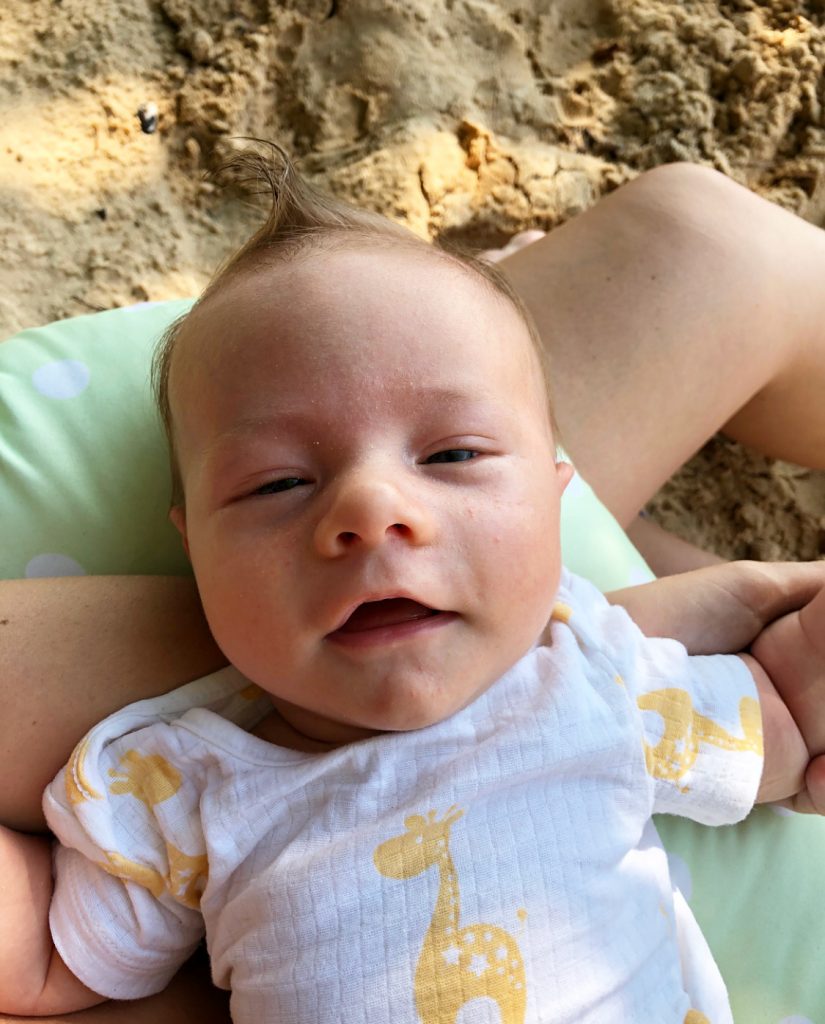 It was such a nice way to spend the morning but something about the sun made all of us feel extra hungry so we were ready for breakfast 2.0 by the time we made it home. While Ryan took care of cleaning sand off everyone, I whipped up a batch of pancakes using our favorite Simple Mills almond flour pancake mix that arrived in my most recent Thrive Market delivery. 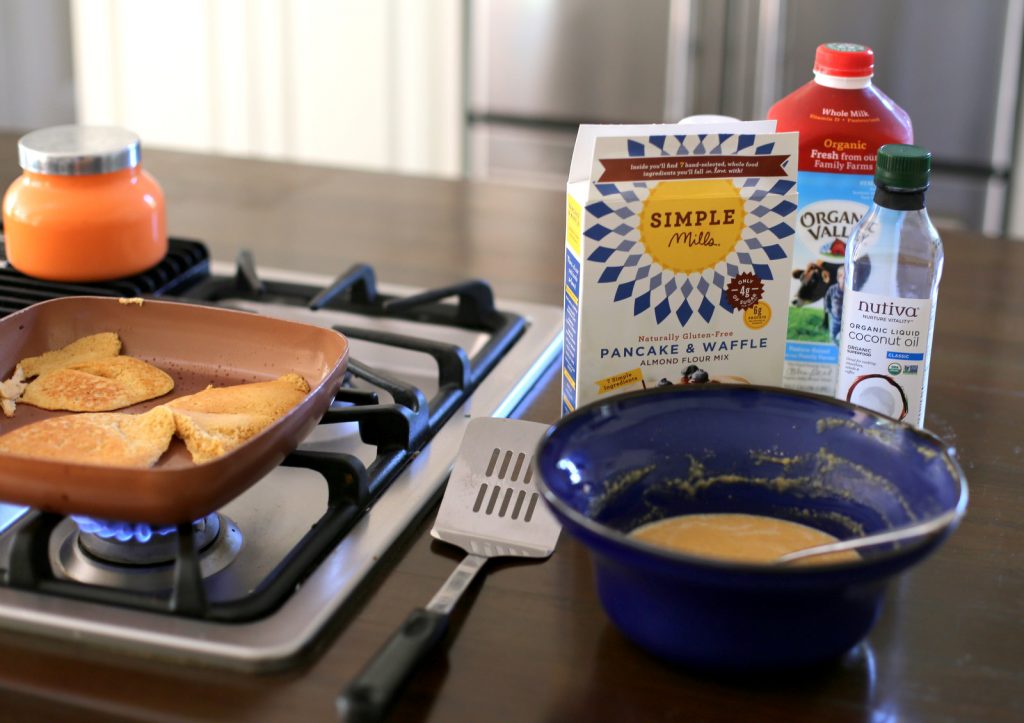 The mix is a staple in my Thrive Market orders because it’s Chase’s absolute favorite pancake mix. The pancakes are thinner than most pancake mixes so they don’t leave me feeling weighed down and I’ll occasionally add chocolate chips, blueberries or chopped pecans to the mix and we always love the end result!

We spent the rest of the morning around the house and outside in our backyard. The birds in our backyard are inhaling the seed we put in our bird feeder (it’s almost always gone within 24 hours) so we refilled it and then Chase asked us if we could do some weeding. Nothing like a three-year-old to keep you accountable on yard work, huh!? 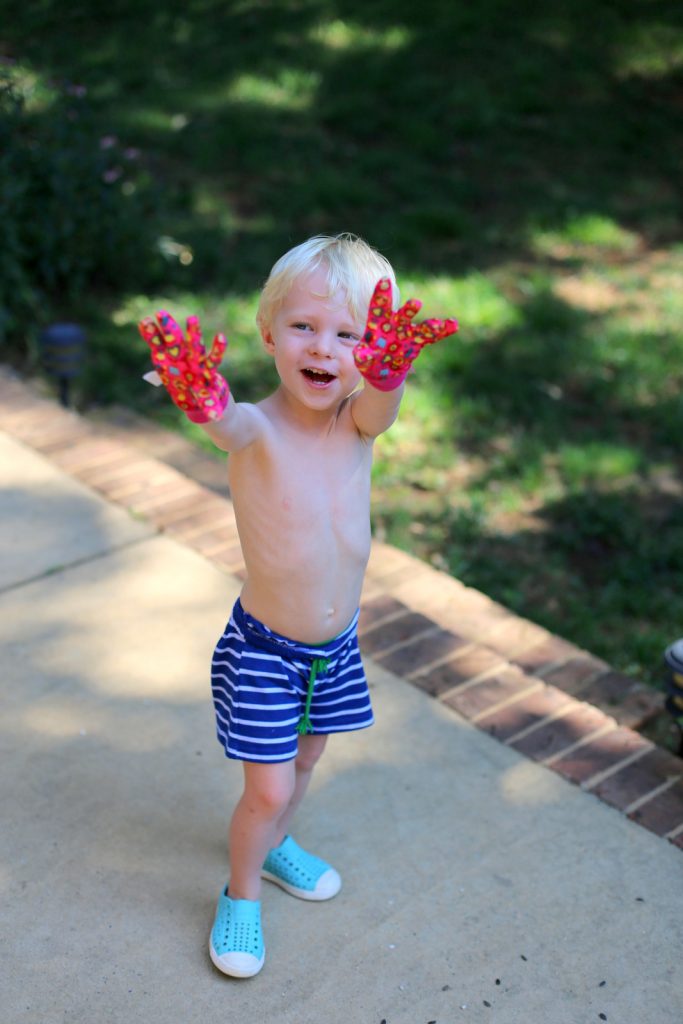 Ryan bought Chase his own pair of gardening gloves the last time they were at Lowe’s so I think he was mostly motivated to weed by his Paw Patrol gloves but we pulled on our gloves and got to work! I showed Chase how to pull up weeds at the base to get the roots so for the next 30 minutes we heard a lot of, ” LOOK! I GOT THE ROOTS!”

The rest of our Sunday was pretty uneventful and I say that in a good way. After lunch, I completed another short nap time garage workout while the boys were sleeping and spent 15 minutes on the rowing machine before completing a 10-minute Tone It Up arm workout. Short and sweet and sweaty! 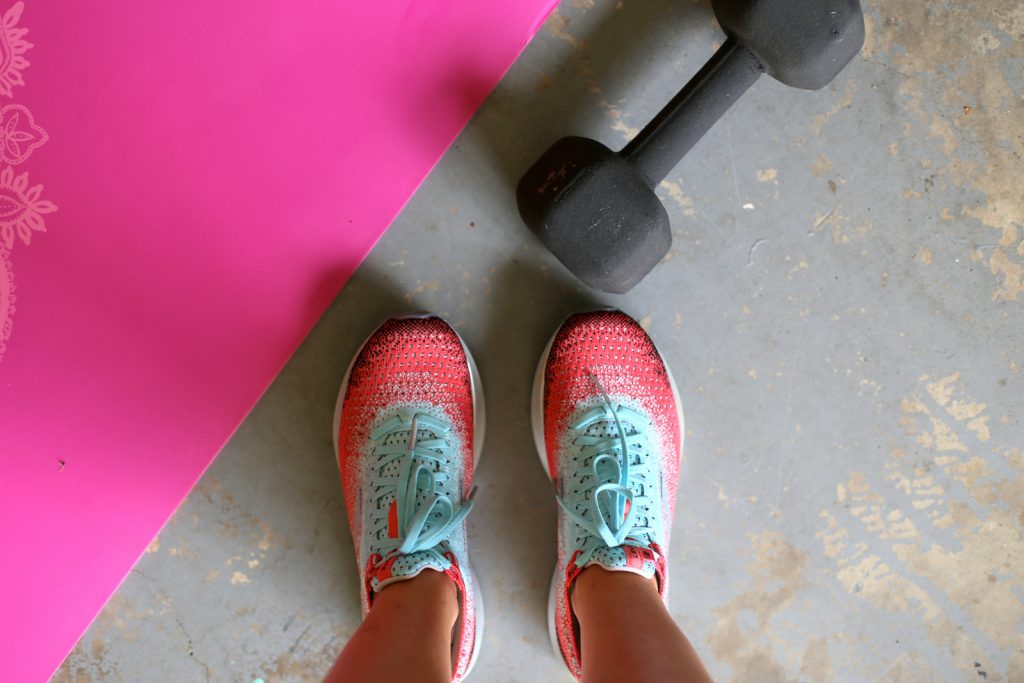 We kept things close to home for the rest of the day and were all in our pajamas by 5 p.m.

I hope you all had a great weekend! Thanks for stopping by PBF today!