Navigation
We’re more than a week late, but it’s time for the final recap of our mountain vacation!

The fourth day of our fall family mountain vacation kicked off with another hike on the Appalachian Trail! 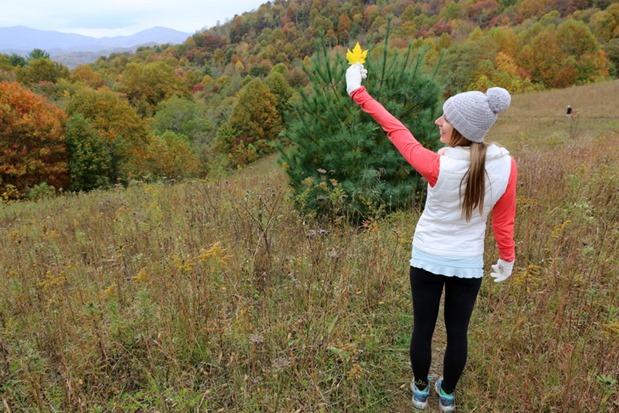 For the past five years or so, Ryan and two of his buddies have met up every fall for a hiking trip along the Appalachian Trail. This year the trip got put on hold thanks to our new addition, but Ryan took the reigns on our family mountain trip and planned some great hikes for our little group.

On the fourth day of our mountain vacation, Ryan and I were joined my my sister and brother-in-law and my dad (and the dogs!) for a five mile morning hike that provided us with some gorgeous views. 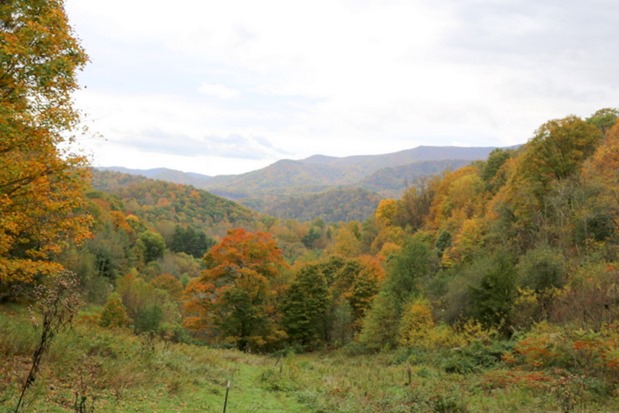 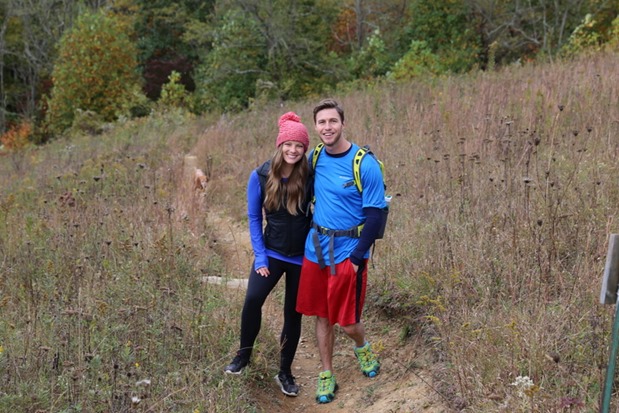 (For those who asked via Instagram, my hat and vest are from Columbia and I LOVE both of them. I actually own that beanie in three colors because I love it so much!)

Our hike started out rather strenuous with a lot of switchbacks and uphill hiking, but that meant that the hike back to our car was a breeze. Work hard on the way out = Easy hike home! 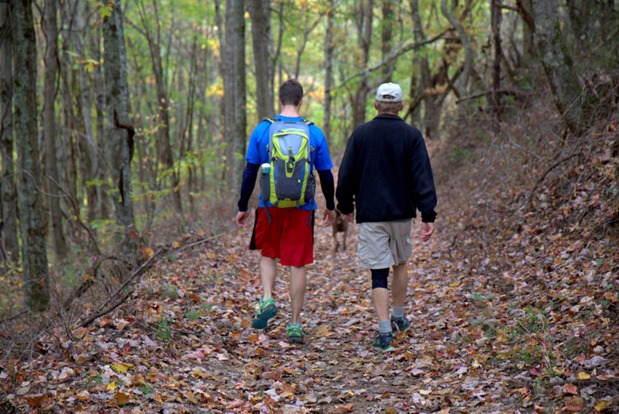 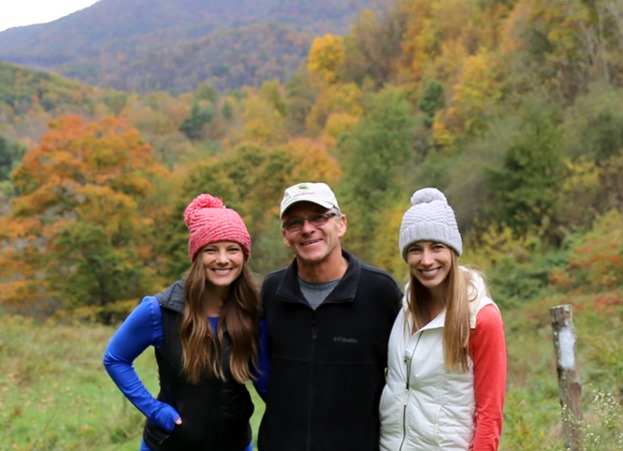 Ryan made the hike extra fun by suggesting we play a few rounds of “Predators and Prey.” 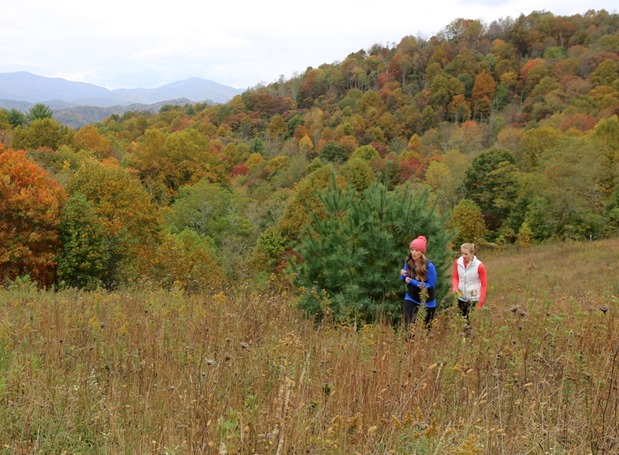 To play the game, one person is the predator. They select a key word to yell out randomly (something as simple as “beautiful leaves”) and that would prompt everyone else to run and hide while the predator counts to 15. The predator then opens their eyes and must stay in the same place, but they can turn 360 degrees to try to spot people. Though the may know where someone is thanks to dogs who like to give everything away, they must be able to see the person or an article of clothing and call out the color they see. Once you’re spotted, you’re out.

The predator then closes their eyes and counts to five (“Mississippily”) while everyone who is still in the game scrambles to move closer and find a new hiding place. The predator then repeats the same process as before and tries to spot people. You win the game if you are the last one left hiding or if you get close enough to touch the predator. The winner then becomes the new predator and chooses a new key word to yell out to begin the game again whenever they want. It’s a blast and a great way to break up a hike! 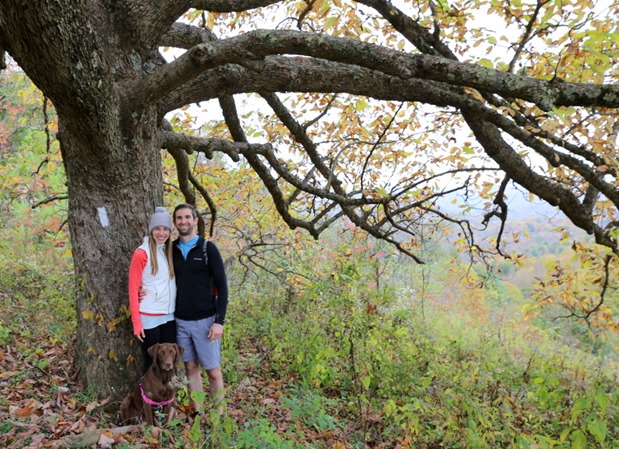 During our hike, we passed a bunch of people who were hiking with backpacks full of gear to camp overnight along the trail. Everyone was so friendly and it was neat to hear about their experiences along the Appalachian Trail so far. (Ryan says he is convinced overnight hikers are some of the nicest people you’ll ever meet.)

We made it back to our rental house in Banner Elk around lunchtime to find my mom had bathed Chase and changed him into an adorable new Peter Rabbit outfit. 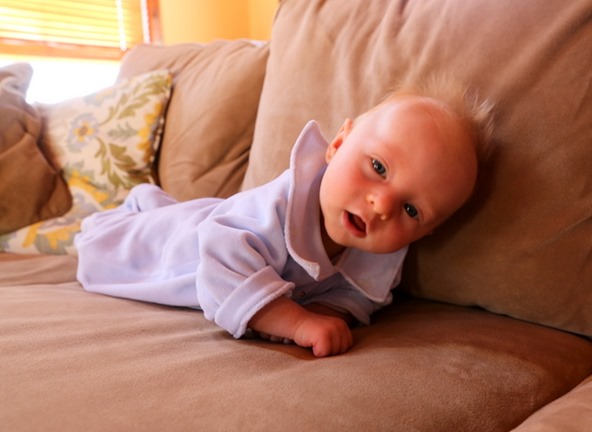 I must say one of my favorite things about having a baby boy is seeing him with his grandparents. My heart absolutely swells every time I see them cuddling our little guy, bouncing him or making him smile.

We were all ready for a few hours of downtime after our hike and ate lunch at the house before lounging for a bit. Then it was time to head out again! My mom, sister and I really wanted to pay a visit to Moses Cone Manor, a 13,000 square foot mansion built in 1901 that offers expansive views of the mountains. 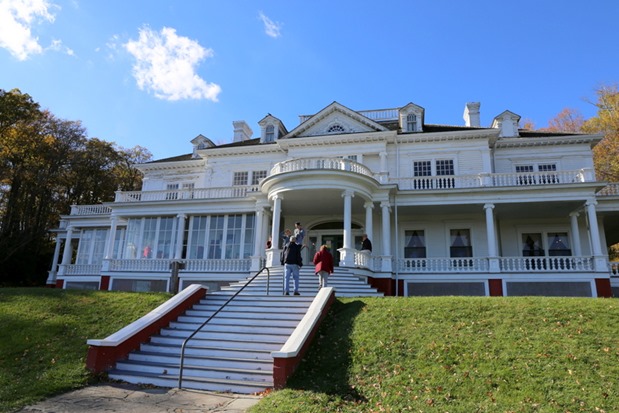 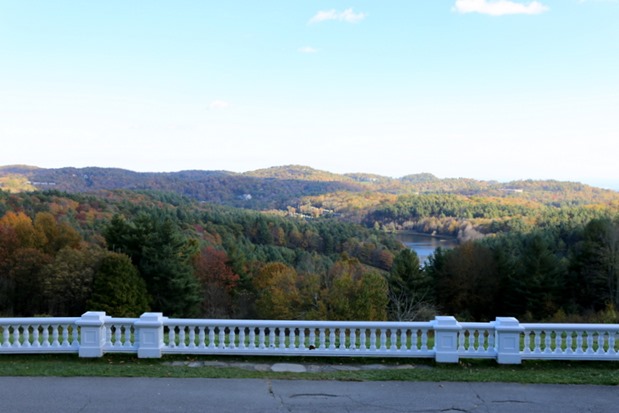 The inside of the mansion features features handmade crafts by local artists and we had a great time looking at the beautiful souvenirs. 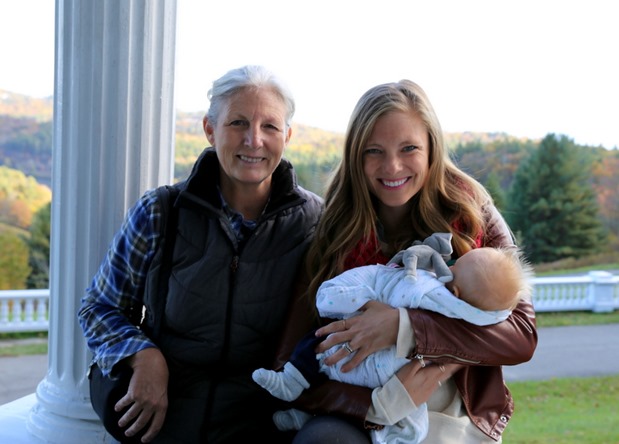 (Chase’s spiky hair got a lot of attention from the sweet ladies working at the manor. I love my little fluffball!)

Eventually we headed back to our house to meet up with the guys and settle in for a delicious spaghetti and pizza dinner before bedtime. 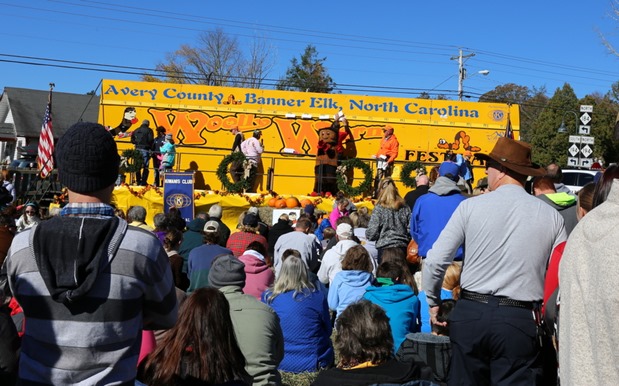 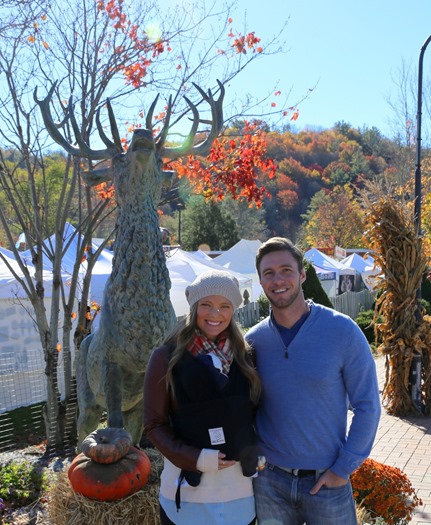 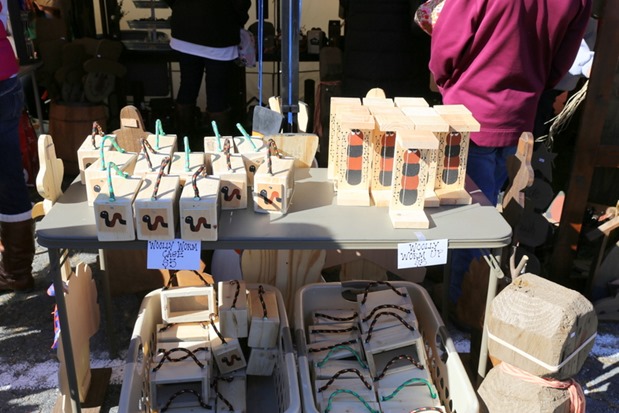 Yes, people actually race the worms and it’s a riot!

Though no one in our group brought a worm to race, we had a good time wandering around the festival, visiting with the vendors and indulging in some of the festival food! 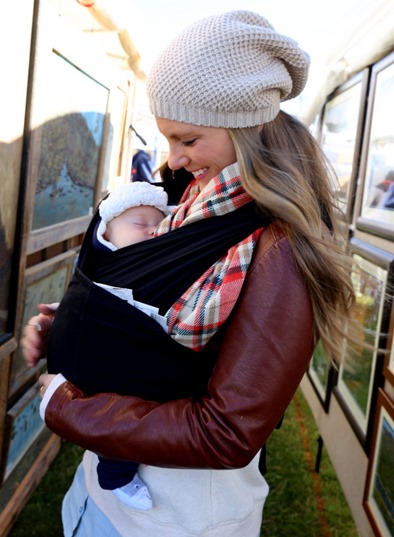 Leslie and I each left with an adorable wooden reindeer that we both bought for $10. Ross and Ryan earned major husband points for carting them around the festival for us! 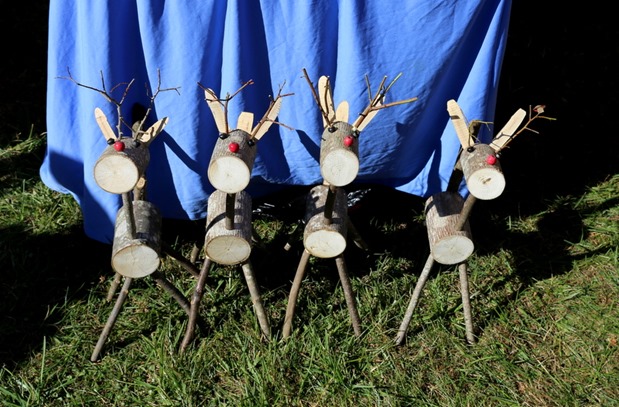 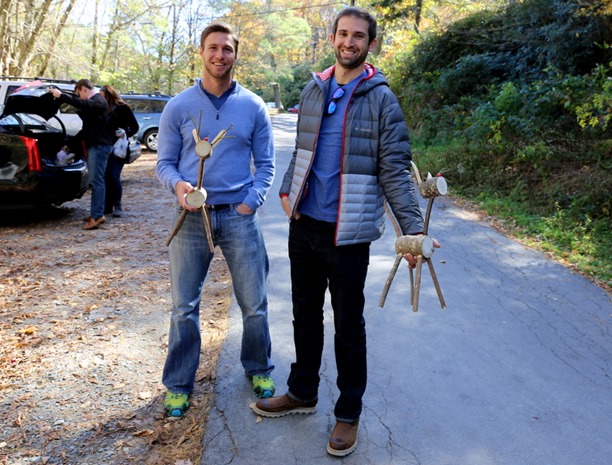 We spent the rest of our Saturday at the house, playing Scattergories and corn hole and sipping on hot chocolate that Leslie and Ross made from scratch. It was so, so good and I made sure to keep my marshmallow-to-hot-chocolate ratio on point. 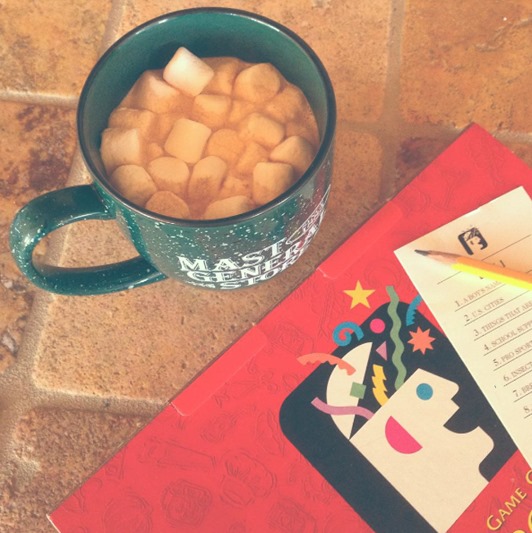 Chase celebrated the end of a great vacation by throwing himself a No Pants Party. 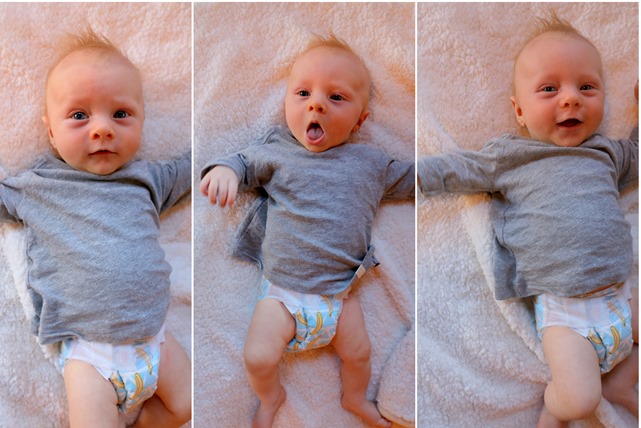 Our fall mountain vacation came at the perfect time for us and it was such a wonderful vacation – Chase’s first! – that I’ll remember forever. I am missing my family already but counting down the days until I see my parents again at Thanksgiving!

« BFFs and Babies
When All Else Fails Playlist »