Navigation
The second day of our honeymoon started off with a sweaty workout at Little Palm Island’s fitness facility. 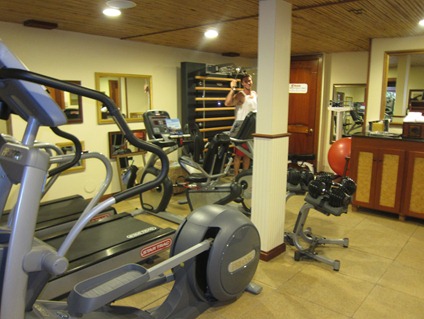 After our workouts were complete, we headed back to our bungalow to shower before eating an apple and catching the first boat back to the mainland. 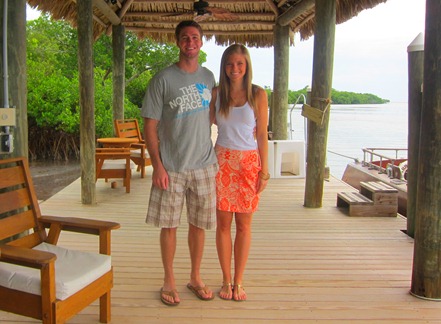 Our plans for the day took us to Key West, the southernmost key of the Florida Keys.

After a 30 minute drive, we arrived at Key West and our stomachs were seriously grumblin’. We needed breakfast fast.

We found an adorable little creperie and grabbed a table outside. 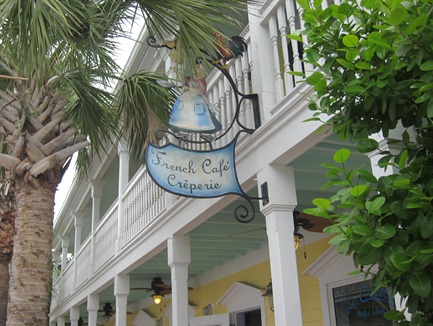 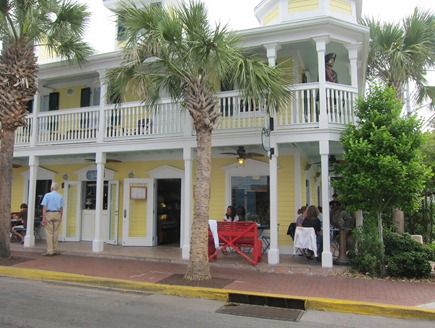 When we walked into the creperie, the delicious aroma of pastries and crepes filled the air. We decided to split a butter croissant while waiting for our breakfasts to come out. 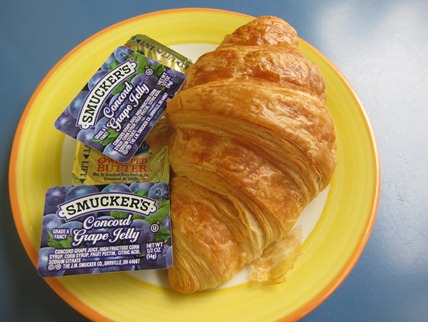 This was hands down the best croissant I’ve ever had. It was doughy, light and buttery. Perfection.

For my main meal, I opted for an omelet filled with spinach, goat cheese, onion, tomato and mushroom. 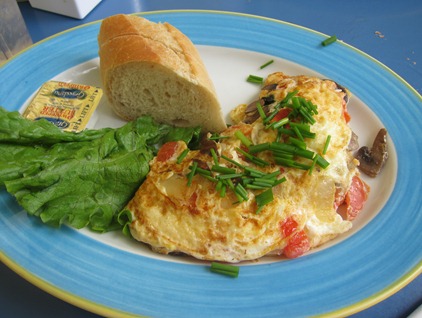 Ryan also ordered an omelet and we both raved about our meals. 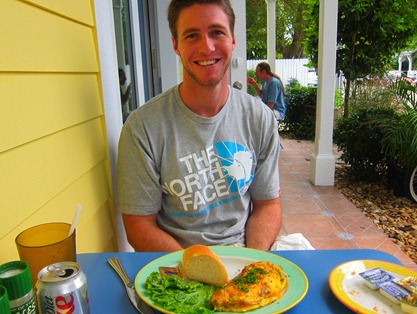 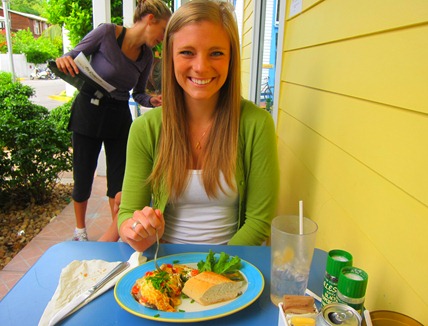 Once our bellies were sufficiently full, we headed to Duval Street to begin a day of exploration and sight seeing.

We walked around for a couple of hours and eventually headed to Ernest Hemingway’s house for a tour. 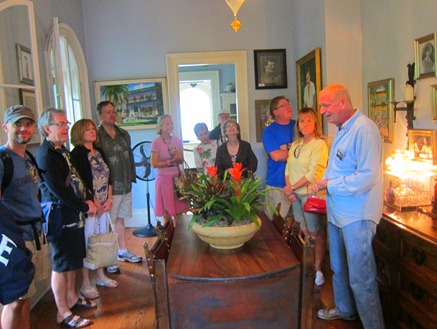 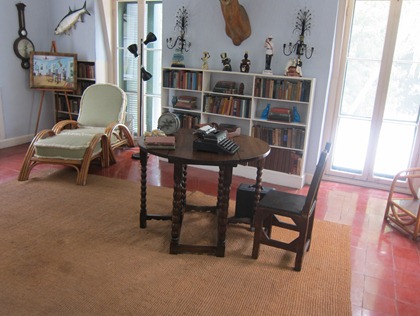 It was really neat to learn about such a well-respected author. I always seem to most enjoy the random tid-bits of information about their personal lives.

For instance, Ernest Hemingway purchased his home in Key West for around $7,000. One time, when he was out of town, unbeknownst to him, his wife at the time (he had four wives over the course of his life), decided to put in a pool… that cost $20,000! 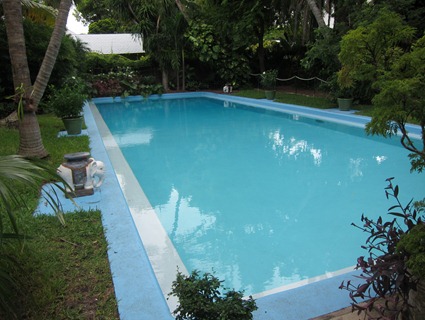 When he returned, he was flabbergasted and handed his wife a penny, telling her she spent all of his money and could now have his very last cent.

She had the 1934 penny imbedded in the cement of the pool deck where it remains to this day. 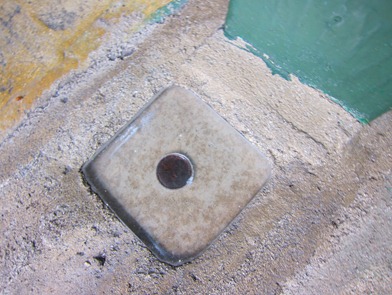 Though Ryan and I both enjoyed the various anecdotes about Hemingway’s life, our favorite part about the property was definitely the 6-toed cats! 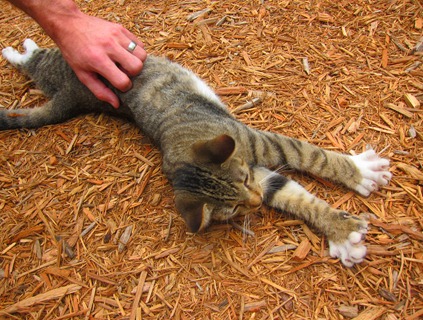 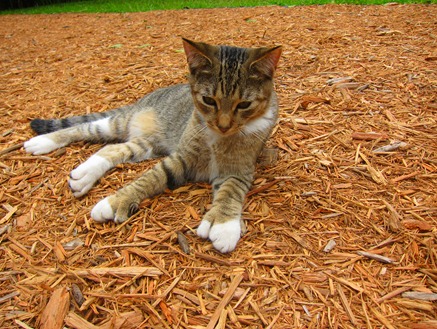 There are 45 cats that live on the property and every single one is descended from Ernest Hemmingway’s famous 6-toed cat. 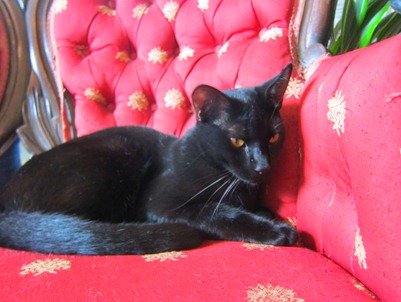 The cats were seriously adorable, so we stuck one in my purse and now have a little playmate for Sadie! 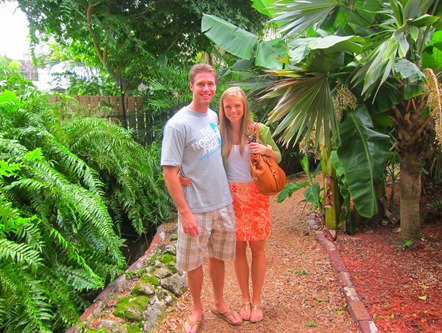 Our next stop took us to the southernmost point of the United States for a quick photo op. 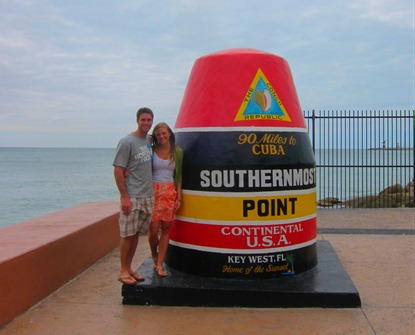 Once we checked that little stop off our “must see” list, we headed back to Duval Street for more sight seeing.

Eventually we started to get hungry again, so Ryan purchased some conch fritters from a nearby street vendor. 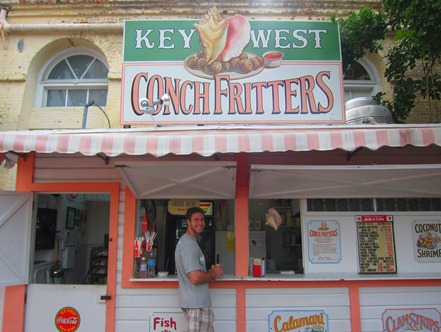 For those of you skeptical about the deliciousness of conch like I was, fear not! Conch is some pretty tasty stuff… especially when dipped in key lime mustard. 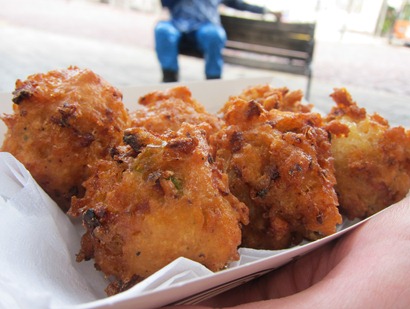 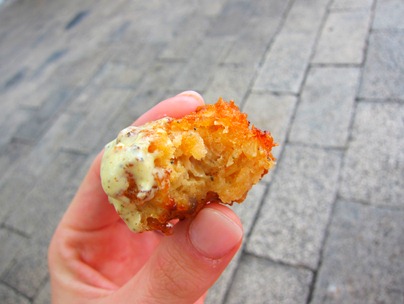 With our appetites officially sparked, we walked another two blocks before stumbling upon Bagatelle, a cute restaurant with plenty of outdoor seating. 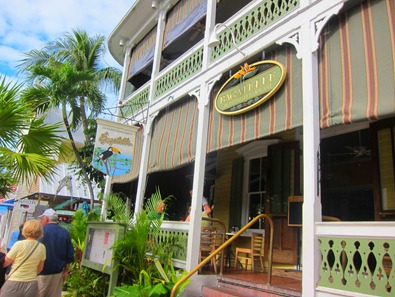 With some persuasion from our waiter, we began our meal by splitting a bowl of seafood chowder that was incredibly creamy and full of chunky potatoes and shellfish. 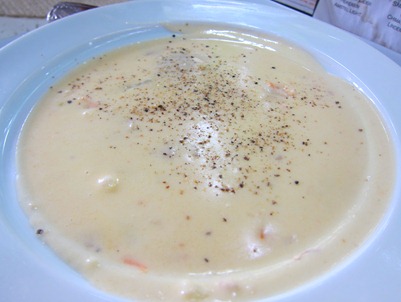 For my main meal, I ordered a grilled mahi mahi sandwich with a side salad. Our waiter also brought us a plate of fries to share because they were “too good to pass up.” 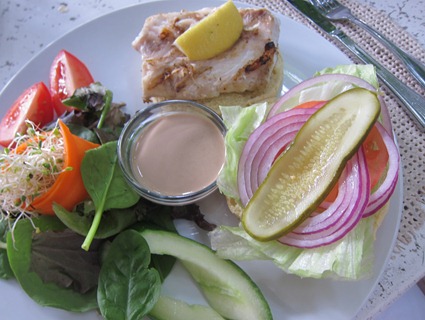 I realize the portion of fish looks tiny in the above picture, but it was actually quite generous! I ate it all, as well as about 3/4 of the plate of fries. 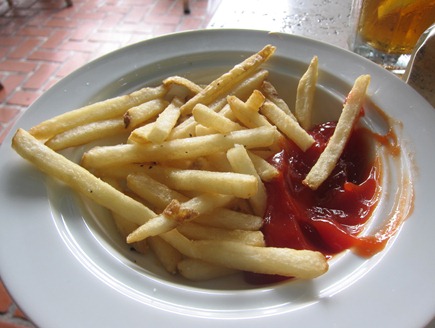 Though everything was delicious, Ryan’s Cuban sandwich stole the show. Hands down the best Cuban sandwich I’ve ever tasted. According to our waiter, the pork in the Cuban is marinated for four hours before being slow cooked. It’s a winner!

After lunch, we walked around for a bit and I purchased a little decal for the back of my car. 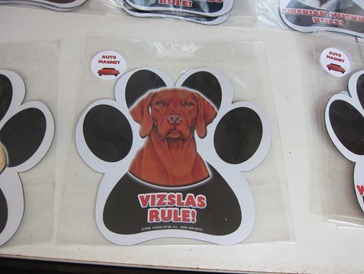 Totally kidding. Is that not the ugliest vizsla you’ve ever seen? Sadie would be ashamed.

On our way back to our car, we grabbed some dessert. 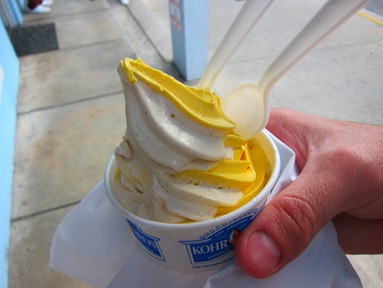 Ryan and I shared a medium cup of pumpkin and cinnamon swirled custard. It was fantastic and satisfied our sweet tooth.

We then headed back to Little Palm Island to relax a bit before dinner.

And that’s where I’ll leave off for the time being… Ryan just woke up and we have more honeymooning to do today! 😀

Hope you guys are doing well!