Navigation
Since Ryan and I don’t have a washer and dryer in our new rental house (yet?), we waited until one of us couldn’t go another day without clean underwear (Ryan) and headed to the laundromat this morning to do several loads of laundry.

The laundromat was actually a really nice experience. Sure it was a pain to load all of our clothes into the car and unload them, but it was really nice to have a bunch of loads of laundry completely done within an hour.

Usually laundry day lasts from dawn until dusk in our house because we wait until we both need to use the washer and dryer and then it’s mayhem.

As I typed out that last sentence, I just had a thought. Is it weird that Ryan and I don’t combine our laundry? We have two separate laundry baskets and I do my laundry while Ryan does his.

Occasionally we’ll combine loads, but for the most part we stick to our own stuff. Not sure if that’s uncommon for married couples, but his stuff is extra stinky, so I’m fine keeping our stuff separate just in case I need to pull something out of the dirty laundry bin.

When we arrived home from the laundromat, it was time to hang up our clothes. This was also not nearly as painful as it used to be for me because the closets in our master bedroom are flippin’ massive! 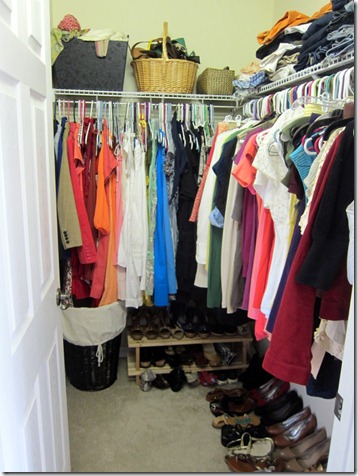 Ryan has his own walk-in closet that’s the exact same size. I swear, if you combined the closets they’d be close to the size of our bedroom. I’m in love.

I spent a good three hours unpacking boxes filled with clothing, shoes, accessories, belts and purses last week, so it was nice to be able to hang up my clean clothes in an organized closet.

When I unloaded my clothes last week, I took time to hang them up according to season, style and color.

There were candy machines at the laundromat, so I spent a good dollar in quarters on peanut M&Ms. I’m pretty sure I could’ve spent five dollars, but this one woman gave me the evil eye when I went to get my fourth handful.

Since that lady’s judgmental looks ruined my plans to have M&Ms for lunch, Ryan and I had a more substantial lunch when we arrived home. 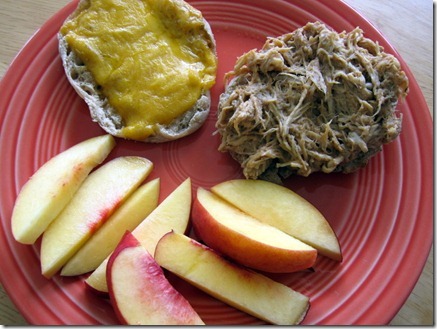 I had a BBQ pulled chicken sandwiche with melted cheddar cheese on a whole wheat English muffin. 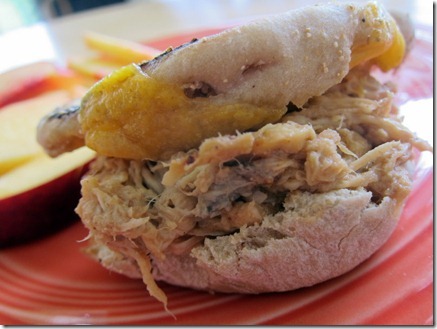 A perfectly ripe nectarine served as a side… as did a pint of raspberries. A pint is one serving, right?

I’m off to organize our house a little bit. Our friend Ross is driving in town for the night from Jacksonville (and he’s bringing Kona!) and the three of us are heading to Orlando early this evening to celebrate a special birthday. Should be a fun night!