Our dinner last night was fantastic, but somehow we had a feeling it would be going into the evening. 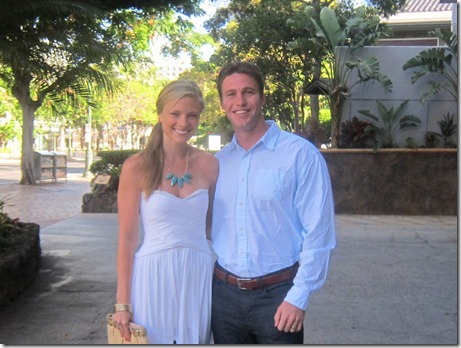 My father-in-law’s girlfriend used to live in Oahu and he has visited the island with her many times. He told us we must visit Michel’s, a romantic waterfront restaurant located just outside of Waikiki, during our visit to Hawaii.

We made early reservations for last night and upon entering the restaurant, we were absolutely blown away. 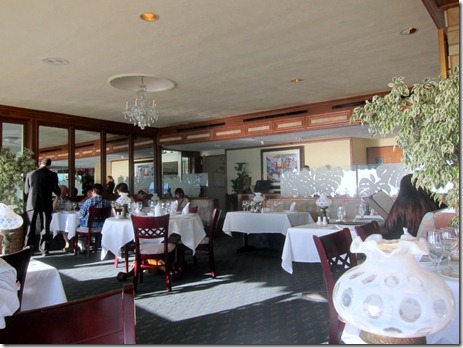 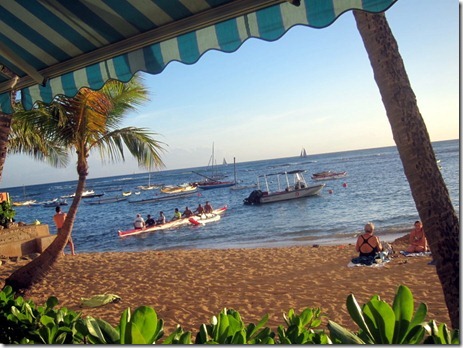 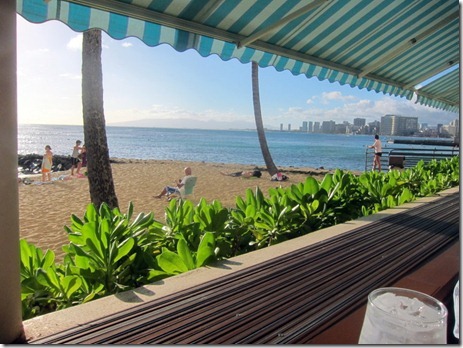 Talk about a view! 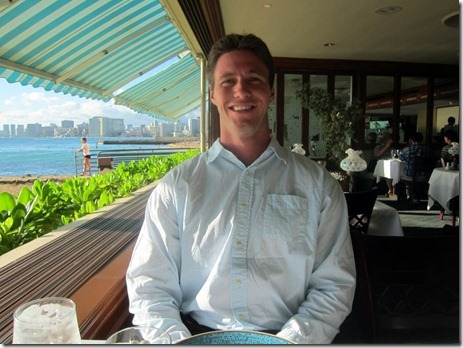 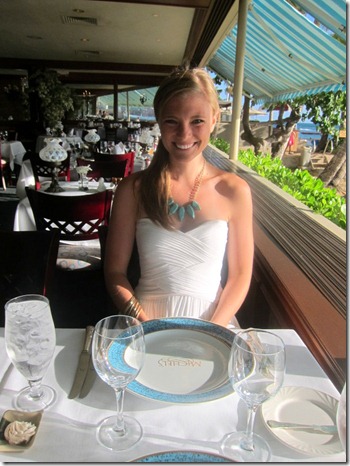 As we were seated, our waiter greeted us and we liked him immediately. He was so personable and welcoming and talked about the food we were about to enjoy in a way that made our mouths water. We dug into the bread basket that was served with the most incredible honey and macadamia nut butter while waiting for our drinks. 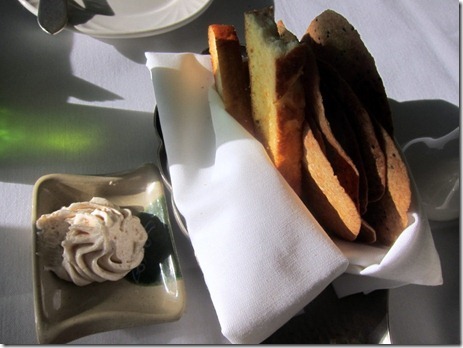 That butter didn’t last long and our waiter was kind enough to notice us getting low and brought out some more.

Our main meal began with an amuse-bouche from the chef, which included steak in a cabernet sauce with purple sweet potato and the most succulent fig I’ve ever had in my life. 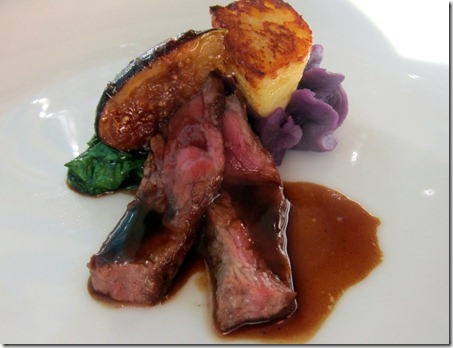 As big-time tuna lovers, Ryan and I ordered the tuna tartare appetizer with wonton chips to share, which was a great decision. 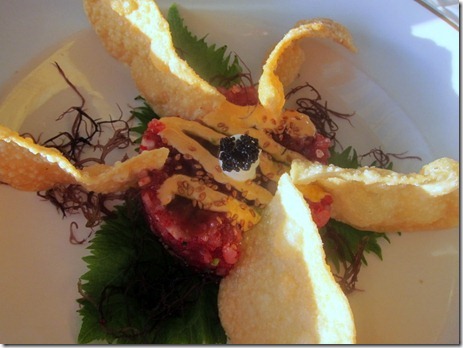 The bites that included the roasted red pepper aioli were my favorite.

The seafood came out in a bowl and the chef poured the rich tomato broth over everything at our table, which made the dish feel extra special. 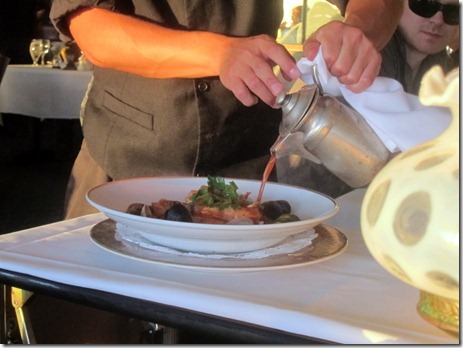 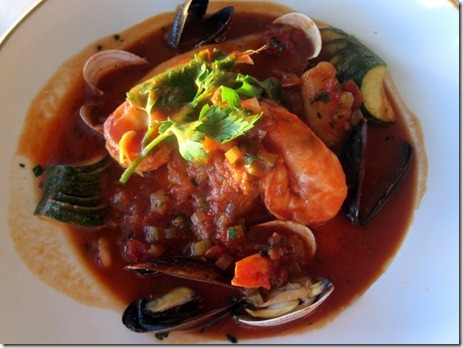 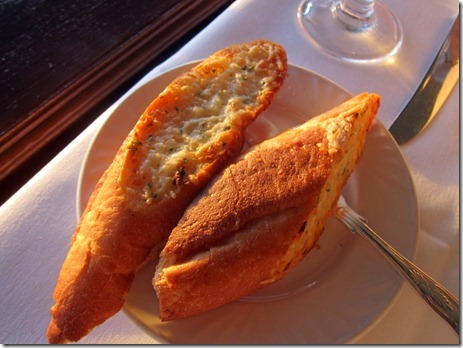 This seafood lovin’ girl was in heaven! I ate everything but the shells and used the garlic bread to soak up the remaining broth.

I must also mention Ryan’s dinner selection because we both thought it was incredible. 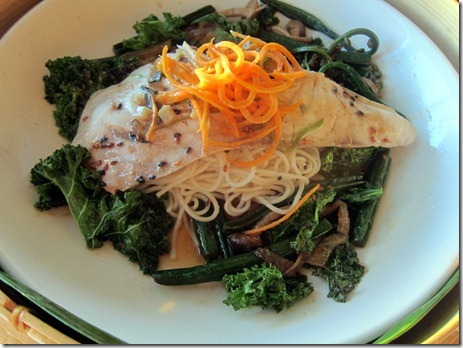 Ryan ordered Michel’s steamed onaga (red snapper), topped with ginger, garlic, green onion, Chinese back turnip and served with somen noodles and stir-fried mushrooms. His dish was highly recommended by our waiter and was so full of flavor.

Just as Ryan and I were about to discuss dessert, our waiter came over to our table with quite the surprise. 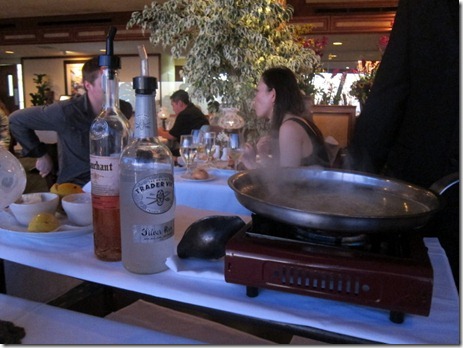 My father-in-law called the restaurant ahead of time and pre-ordered dessert for us which was such a special treat! He selected the crepes Suzette for us to try and we had a great time watching our waiter prepare a special sauce with butter, sugar and orange liqueur. 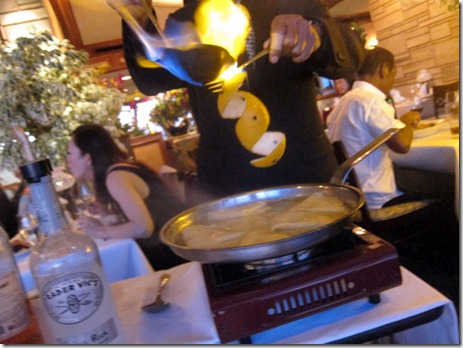 Ryan and I were each given our own plate with three crepes and a scoop of vanilla gelato. 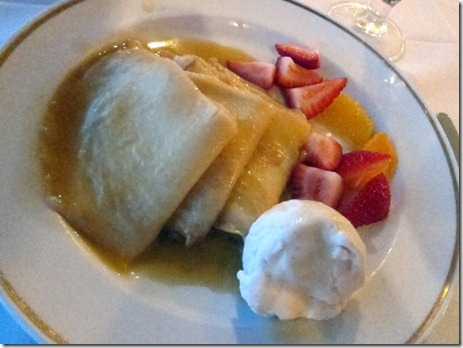 Perfect. As someone who usually opts for chocolate-based desserts, I couldn’t get over how much I loved the orange sauce, creamy gelato and homemade crepes. It was incredible and I only left half of a crepe behind. Thank you so much to my thoughtful father-in-law for such a fun and delicious surprise! 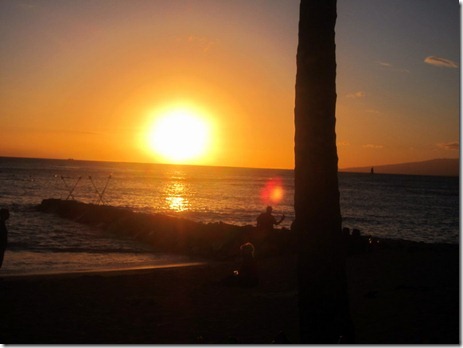 P.S. The Fashion page was updated! I’ll  also try to snap a picture of the back of my cut out dress from Monday night soon since I received requests to see the back from quite a few of you. I’m on it!