For the past two evenings, Ryan and I have spent a few hours assembling furniture and organizing things for our baby’s nursery! The crib and a side table arrived, along with a new ceiling fan and I’m so happy to see the neutral look we’re going for begin to take shape. 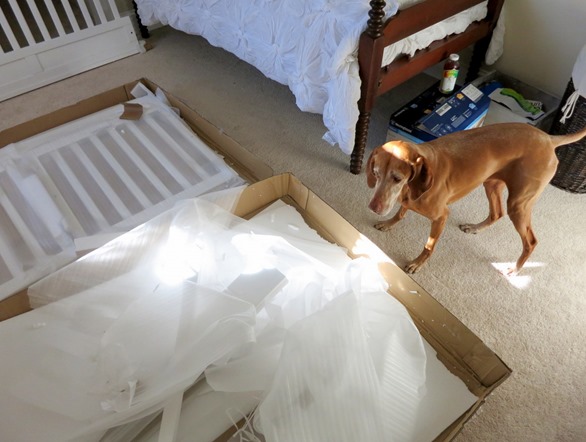 Naturally Sadie inserted herself in the middle of the fun but spent her time chasing light reflections which was oh so helpful. Ryan and I often joke that we wish we could give Sadie a task to help with sometimes because she always seems so darn eager to be involved! If only she had thumbs…

Assembling the crib wasn’t too bad but uninstalling the old fan that was previously in the room was such a pain. Getting the new fan up and running felt like a piece of cake once we finally got the old fan down. Yeesh! I’m just going to pretend that the two other ceiling fans we’re hoping to replace in our house one day will magically uninstall themselves when the time comes.

This morning I woke up feeling not so hot. I hate waking up on mornings when I have to teach feeling nauseated because I know the feeling is likely to pass but I get worried and always flip flop over whether or not I should preemptively call someone to standby to sub for me just in case.

So far I haven’t needed to do that, so I held off and immediately made myself a small smoothie since having something in my stomach at all times is still a pregnancy necessity for me when it comes to keeping nausea at bay. 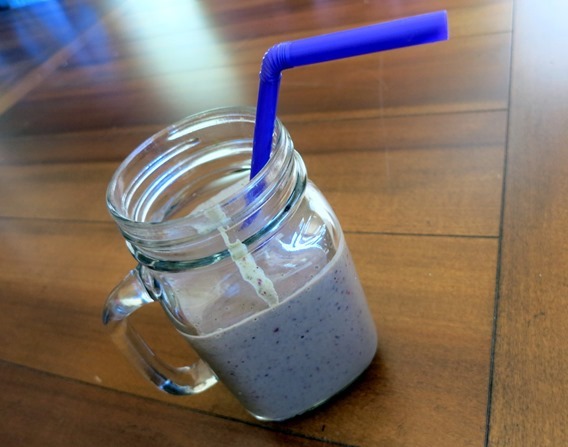 In my smoothie: Frozen berries, a frozen banana, unsweetened soymilk

The smoothie definitely helped take the edge off while I prepared my real breakfast and I’m feeling better already. I’ve said it before and I’m sure I’ll say it many, many times to come: Pregnancy nausea is the weirdest thing ever.

Breakfast today centered around a bowl of my egg white oatmeal but I added a bit of peanut butter and a scoop of Hershey’s Special Dark cocoa powder to the bowl to amp up the flavor.

The Special Dark cocoa powder is my favorite because it really makes the oats taste extra chocolaty. It can also be credited with making them look like death.

Along with my oats, I made myself a cold cup of decaf iced coffee. I’m normally much more of a hot coffee lover, but for some reason iced coffee called to me this morning, so I went with it.

Now I’m off to spend a little time updating my spinning playlist and planning out today’s class before it’s off to teach at 9 a.m.!

Have a great Thursday!