Good afternoon! How are you guys doing today? All is well over here!

My day began at 5 a.m. when Chase decided he was up for the morning. We’re up every two hours or so for nighttime feedings these days and thankfully Chase was pretty easily comforted last night and fell back asleep relatively quickly after he nursed. This was a far cry from the past two nights when he wanted to party it up for at least an hour after breastfeeding. I’ll take a 5 a.m. wake up call any day over random nursing parties in the middle of the night! 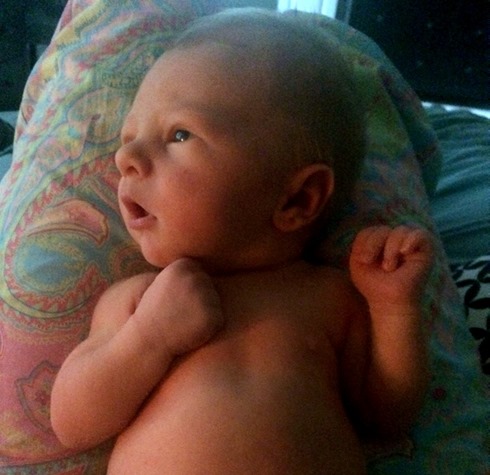 Once we were up, I fed Chase and Ryan changed his diaper before we returned to bed to play with Chase until Ryan had to get up and head to work. After we said goodbye to Ryan, I took Chase downstairs for another feeding that took place as I watched an episode of Grey’s Anatomy. I always thought I would have the ability to do other things while breastfeeding, but right now nursing seems to be a two-handed job as I try to keep Chase latched and milk flowing. Maybe one day I’ll have the ability to read or blog a bit while nursing, but right now breastfeeding is receiving my undivided attention… Well, breastfeeding and watching Dr. McDreamy.

Last week, I ventured out on my first short postpartum walk and have tried my best to get out every morning since then with Chase and Sadie before it gets too hot outside. Walking around the neighborhood helps fight the cabin fever that started to set in after days at home and even though we’re not walking far distances, I look forward to our walks every morning! My mom joins me on occasion when she doesn’t go to a morning Jazzercise class and I love the company! 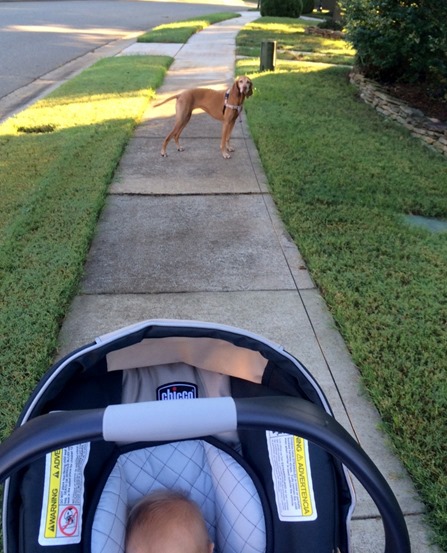 It took Sadie a few walks to get used to the stroller (she walked just about as far away from the stroller as her leash allowed for our first three walks) but she’s doing much better now… At least until sprinklers take up sidewalk space and we have to navigate around them. Watching her freak out over the stroller and sprinklers is a new kind of comedy.

Once we got home from our walk, Chase was ready for another feeding which was followed by a rather fussy morning. I spent the next few hours trying to soothe his cries and entertain him when he just wanted to be awake, looking at me and at the lights from the ceiling fan. Ryan and I joke that Chase is like a little moth right now because he loves looking at lights. Apparently lamps, lighting fixtures and nightlights are the coolest thing ever to our little man.

After lunch, I had the chance to grab a shower while my mom watched Chase and then the three of us headed out to the doctor’s office for an appointment regarding Chase’s lingual frenulum (the band of tissue that connects the bottom of the tongue to the floor of the mouth). Apparently it was tight which could have been interfering with breastfeeding (he’s eating often but comes on and off the breast a lot during every feeding and seems flustered) and could also impact speech in the future. 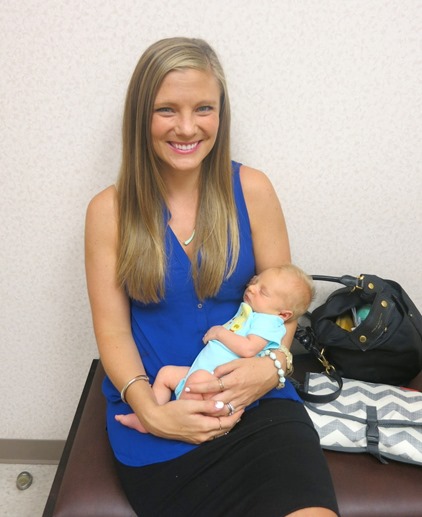 We arrived at the appointment 10 minutes early and ended up waiting for about an hour to see the doctor since he was tied up in a surgery at the hospital. Chase was a bit restless, but he nursed and settled down a bit before it was time for the doctor to check out his tongue and confirm that he was tongue tied and needed his frenulum snipped. I was nervous about it but we did research ahead of time and the doctor assured us it was a very simple procedure so we had him go ahead and complete it while we were there. Chase was gone for about three minutes while he had the frenetomy performed and before I knew it, he was back in my arms, nursing again. I almost cried when he was returned to me sobbing, but he settled down quickly which was comforting. 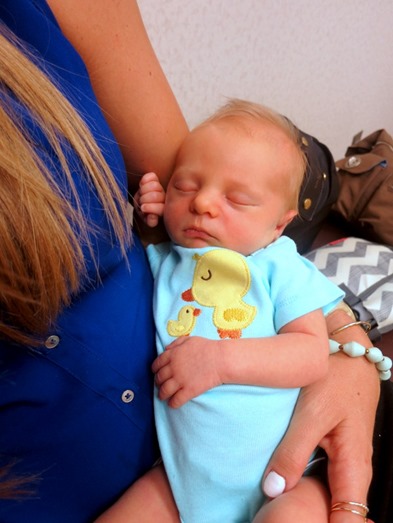 My mom, Chase and I just arrived back home and now we’re hanging out waiting for a visit from Brittany!

Hope you guys are having a good Wednesday!