Yesterday really felt like a Friday at work. Everyone was energetic and antsy waiting for the weekend to arrive. That, coupled with the fact that it was the last day for one employee who is moving to New York, made the office quite a-buzz.

At around 4 p.m. my boss came into the “writer’s cube” and told us there would be a paper airplane competition commencing in approximaltey five minutes. We scurried to create the fastest, most aerodynamic jets we could from scrap paper. 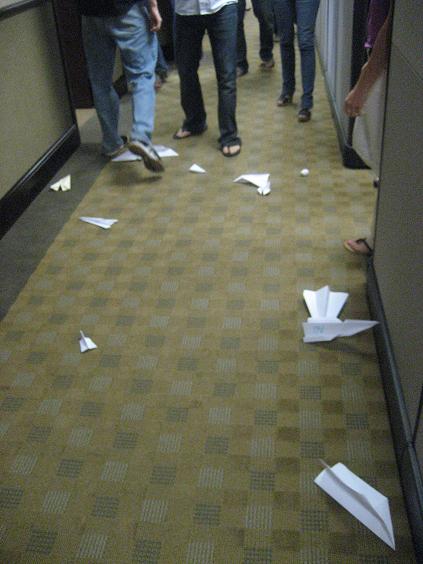 Sadly, the only paper airlplane I ever learned how to make was the old fashioned “hot dog style” plane (Exhibit A: bottom right corner of the picture). I loved my plane and even wrote “Air Julie” in hot pink on the sides, but this affection did not motivate my little flier to fly.

I’m sad to report I actually came in last place out of the entire office in the paper airplane competition. I think Ryan was more disappointed about this news than I was. I believe his exact words were, “Oh Baby, we gotta work on that.” Apparently it’s quite a serious issue.

When I got home from work, I quickly assembled a veggie stir fry using random veggies we had on hand.

I chopped the veggies and sauted them in a pan sprayed with cooking spray. I also added a freshly chopped garlic clove and two sun-dried tomato and mozzarella chicken sausages.

Once the veggies softened, I added a splash of marinara sauce and topped the mix with breadcrumbs.

Ryan and I both loved this simple dinner. The flavor of the sausages really infused all the veggies. Very tasty!

After dinner it was time to head toward the UCF Arena for ROBIN WILLIAMS! Yahooooo!

Tons and tons of people came out to see Robin perform. He was beyond hysterical. I laughed until my tummy hurt!

Unfortunately cameras were not allowed so I couldn’t snap a picture of Robin, but here’s a picture of his stage:

I love a great night filled with lots of laughter!