Navigation
The third trimester is here! 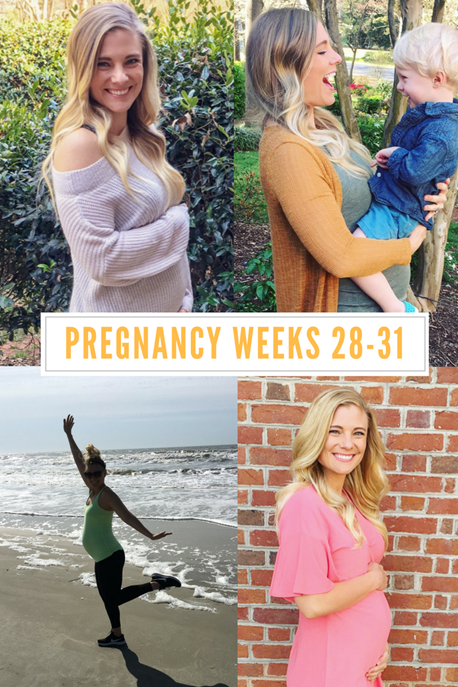 There is something about reaching the third trimester of pregnancy and then the 30th week of pregnancy that all of the sudden makes me feel like I’m in the home stretch. Even though I very likely have two months of pregnancy remaining, saying I’m now 32 weeks pregnant makes me feel excited and so grateful because it’s truly beginning to feel real. I’m slowly, slowly releasing some of my pregnancy-related anxiety and the amazing feeling of our baby rolling around in my belly fills my heart right up. Keep wiggling around in there all you want, little one!

Just in case you’re catching up, here are the past pregnancy-related blog posts I’ve shared on this blog so far about this pregnancy:

And you may also check out all of my weekly pregnancy updates from my first pregnancy on the Pregnancy page of this blog.

Let’s dive right in to the recap, shall we!? 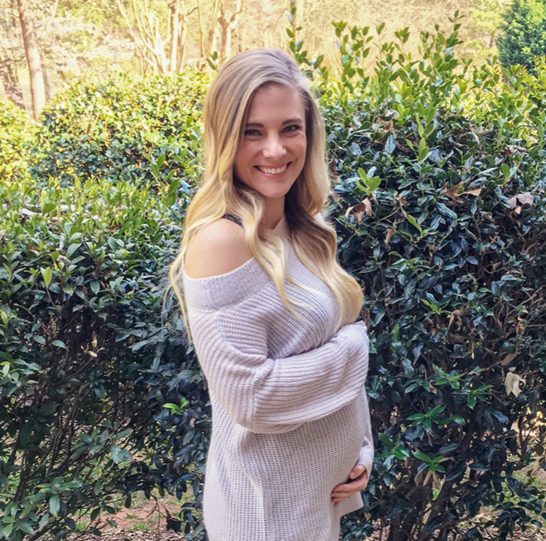 This week the light nausea I began to experience in week 27 of my pregnancy continued. It didn’t happen every day and was more common in the morning but every time it surfaced it caught me a bit off guard since I keep feeling like I am “past that stage.” And then I remember how much everything related to pregnancy can change day-to-day and sometimes, seemingly, hour to hour! My appetite is still fairly high but in the evening hours, I’ve noticed my stomach will often feel bloated and almost overly-stuffed despite lingering hunger. Eating a large dinner can make me feel incredibly uncomfortable so eating smaller meals spread out over the course of the evening seems better for me at dinner time. 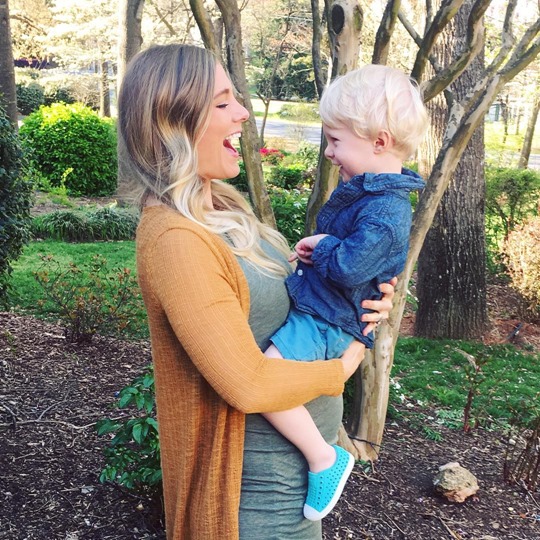 I had another prenatal visit this week and it went well! The midwife who delivered Chase let him control the Doppler and he was quite excited to hear the baby’s “boom booms.” While I still experience anxiety surrounding pregnancy from time to time, the anxiousness I feel waiting in the waiting room of my OB/GYN appointments seems to be lessening with each passing week and I attribute this to constantly feeling our little one move around in my belly… and a recent pep-talk from my doctor. I feel like a broken record in the evening when I tell Ryan how much our baby is moving, rolling and kicking and yet somehow the baby’s movements always seem to stop the minute Ryan places his hand on my belly. Go figure!

While nausea thankfully subsided for the most part this week, sleep was horrendous multiple nights until it finally wasn’t and I slept like a LOG (with the exception of mandatory bathroom breaks throughout the night). A few back-to-back nights of restlessness that kept me up for 2+ hour stretches in the middle of the night were a bit rough and followed by some exhaustion that typically kicked in during the late afternoon. 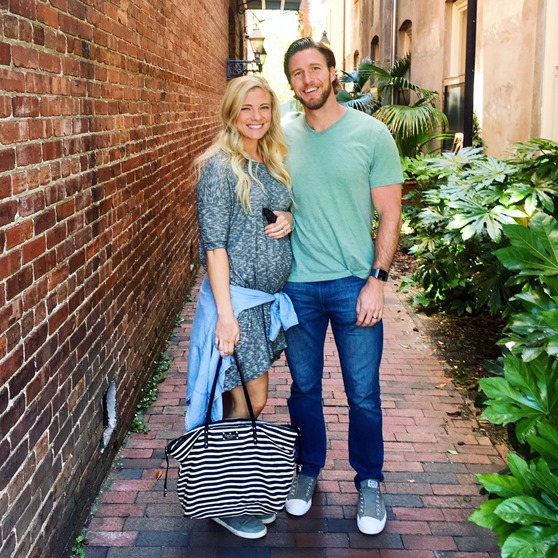 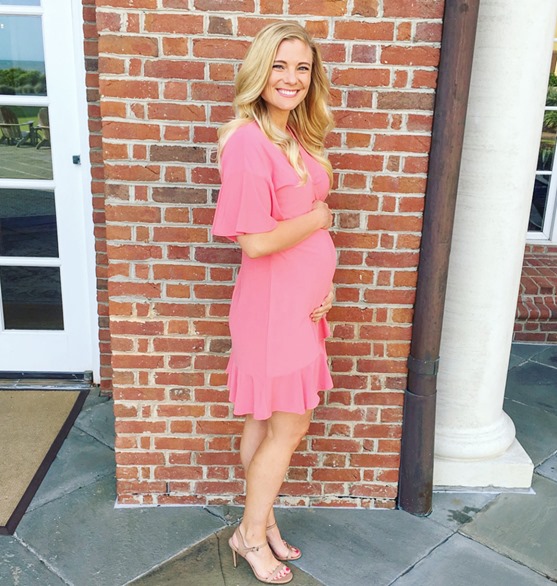 Note: I missed recapping my 30th week of pregnancy, but many of the symptoms mentioned below surfaced during week 30.

Without a doubt the highlight of this week of pregnancy was a great prenatal appointment and our Babymoon to Kiawah Island and Charleston! Ryan and I have been dying to get away as a couple before our second little one arrives and spending some much-needed couple time together was fantastic, especially since I’ve felt a little out of sorts physically lately.

I briefly alluded to some of the not-so-fun aspects of pregnancy that I’ve been struggling with in this blog post but really, really hate to complain in any way because I’m so darn grateful to be pregnant again but I also want to be honest in this space. You guys were amazing and made me feel a lot better about sharing some of these challenges openly because while pregnancy is a HUGE blessing, it can be really hard sometimes. I’ve been experiencing insomnia (the inability to sleep until 3 a.m. or waking up for hours in the middle of the night followed by intense exhaustion the next day) and some serious nausea and it can really take its toll as I try hard to be a good mom to Chase and squeeze in work during any free moments I have during the day. I spoke with my doctor about some of my challenges and he recommended magnesium supplements for my calf and foot cramps and low-dose melatonin for nights when I struggle with sleep. I bought the melatonin but haven’t used it yet however I am really, really loving Natural Calm (a natural magnesium supplement) for both my leg cramps and winding down at the end of the day. Thank you guys for recommending this one to me as well!

One thing that’s also been happening to me this pregnancy is shortness of breath, specifically when I’m sitting in my car. I think this all has to do with the baby’s positioning when I’m driving and while it doesn’t happen every time I drive it’s definitely noticeable and I find myself focusing on better posture and occasionally stretching out my back at red lights to try to take a deep breath.

On the more fun side of pregnancy, this week was the first week I felt like I couldn’t go anywhere without people commenting on my belly. I’m definitely showing a lot right now and had a bunch of strangers stop me during our babymoon to ask if we were having a boy or a girl. When I said we were going to be surprised, every single one but one person predicted a girl with most commenting on the high way I’m carrying as an indicator. We’ll see! I’ve definitely noticed many differences from this pregnancy to my pregnancy with Chase, though I know that doesn’t say a ton about the baby’s sex. I’m craving sweets and carbs like crazy still and will often feel nauseated if I don’t eat some kind of bread-based carb with my meals. At my prenatal appointment, I learned I am up 27 pounds which I think is only a few pounds shy of what I weighed at the very end of my pregnancy with Chase. Ryan, my doctors and I are all thinking this little one is going to be a bit bigger than Chase’s 5 pound 10 ounces when he or she makes their debut!

Girl or Boy Thoughts (And Other People’s Opinions)

I addressed this briefly in my last pregnancy update but I am beginning to realize that I, somewhat subconsciously, think we are having another boy. I think it all comes down to picturing the moment I deliver and I simply cannot envision Ryan saying, “It’s a girl!” I realized recently I am fully expecting him to say, “It’s a boy!” and would be completely shocked if we have a little girl. Is this mother’s intuition finally kicking in!? I have no idea but I am just giddy (and tearful!) when I think about that moment and cannot wait to have our baby on my chest.

In my last pregnancy post, I had a few moms with multiple children of the same sex chime in and share some not-so-great stories about people’s reactions when they gave birth to a baby whose sex was the same as their first child. This makes me so incredibly sad because a baby is a true miracle and the biggest blessing. I’m not saying people don’t have preferences on the sex of their babies or that it’s wrong to want one sex but I would hope that the people in a pregnant woman’s life would only offer love and support and enthusiasm for this blessing. 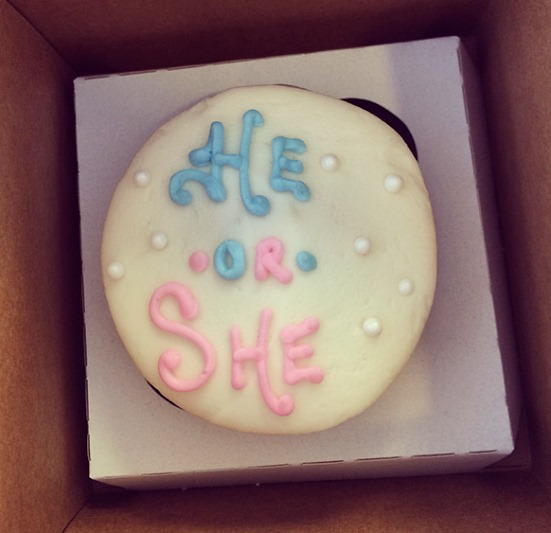 Also, for some reason, it seems like people expect women to want a girl if they have a boy already and for men to want a boy if they have a girl. But here’s the thing: I’m the mother of a boy who initially thought she wanted a girl during her first pregnancy. And you know what? I LOVE MY BOY. He’s the best. He’s surpassed every single image I had for what my child would be like and he’s PURE JOY in a tiny two-and-a-half-year old body. Being the mother of a boy and going through the intense heartache that comes along with experiencing two miscarriages filled up my heart and changed my perspective on everything. There is ZERO part of me that feels like I’d be missing out on anything if we have a boy in June. That boy will be so ridiculously loved and cherished, just as a precious little girl would be if a little girl joins our family in a few weeks. We are just so excited to meet our baby – boy or girl.

Something about not knowing our baby’s sex makes it SO much harder to discuss names! Ryan and I have chatted on and off about names for a baby girl or a baby boy and I have an ongoing list in my phone. Part of me thinks we are going to show up at the hospital with the list on my phone and pick a name from our list of 5(ish) boy and girl names.

Because we were fairly certain about Chase’s name within weeks of finding out he was a boy, this is new territory for me! I never really understood how couples could have a baby and have no name for hours or even days after their baby was born but I TOTALLY get it now! I can easily see that happening to us but I’m hoping that meeting our little one might provide some sort of clarity on the whole name thing!

For those with multiple children, were your pregnancies similar or different? Did this cause you to think you were having a boy or a girl? Were you right?

When did you decide on your child’s name?

For those with multiple children of the same sex, did you experience anything similar to what I mentioned above regarding other people’s opinions about having multiple babies of the same sex?