Navigation
Hello, hello and Happy Monday! I hope you are stopping by the blog today after a relaxing weekend!

We spent most of our weekend outside and eating… Not too shabby, right?

Our friend Ben arrived in town with his friend Alan who is visiting from England on Friday night and we enjoyed having two guests stay with us for the weekend! Ryan and I have known Ben since our Orlando days (<- That blog post takes me back! Any longtime readers remember the mouse house!? Ah!) and it was so great to have him make the drive from Florida to stay with us again.

Ben and Alan were hoping to spend some time on the lake during their visit which sounded great to us, so after a filling brunch that included banana muffins (I loosely followed this recipe) and a frittata, we lathered up in sunscreen and headed out after Chase’s morning nap. 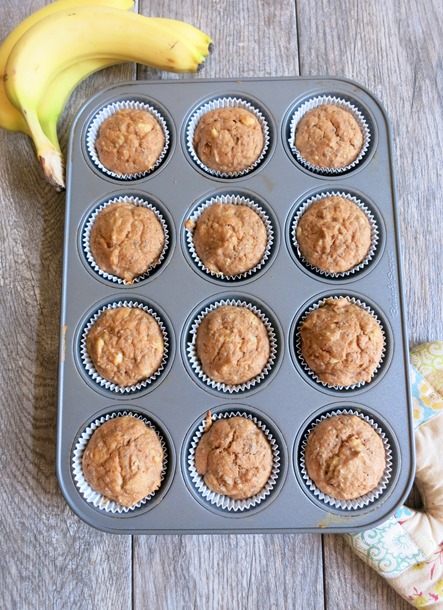 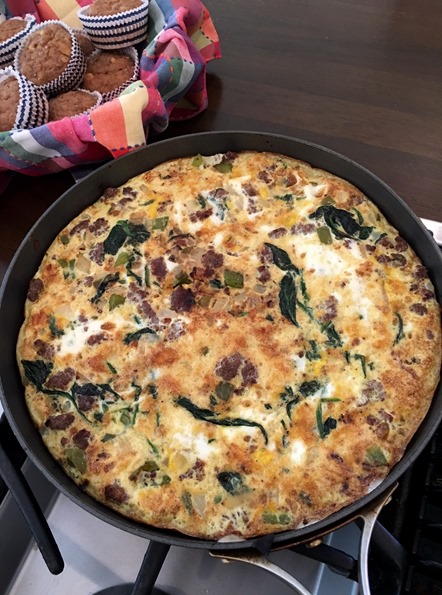 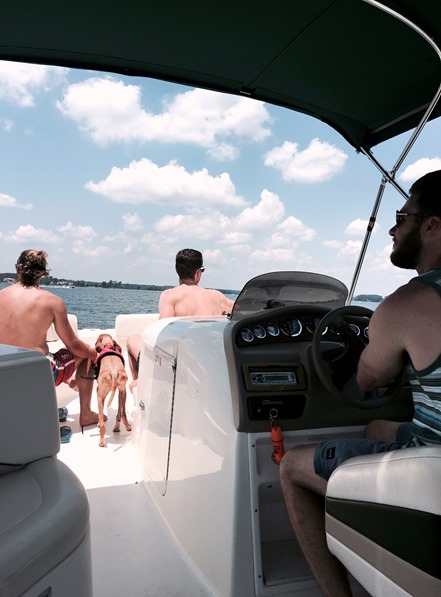 The weather was gorgeous and super sunny. We knew our time on the boat was somewhat limited since Chase’s afternoon nap loomed over our heads a bit, so we found a sandbar nearby and dropped anchor for some swim time! 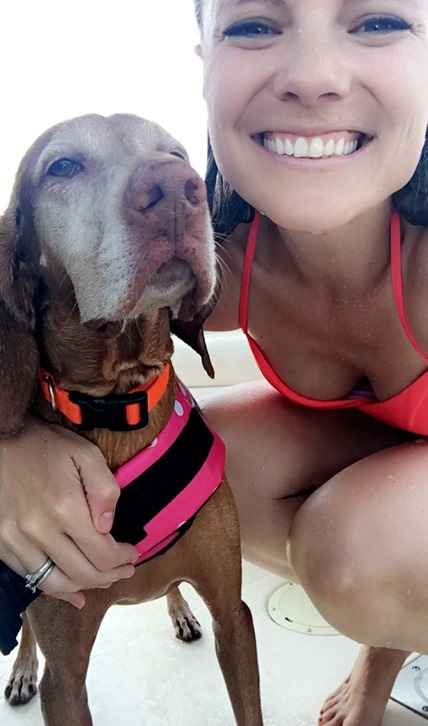 My mother-in-law recently sent us a float toy that we used for the first time on Saturday and it was fantastic!!! Chase absolutely loved it and we really enjoyed watching him splash and play under a protective canopy. 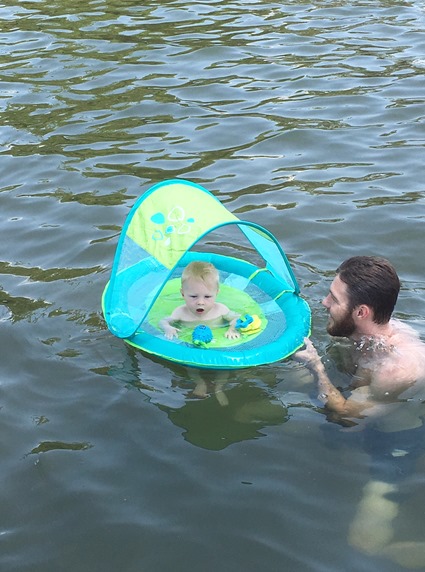 We spent about two hours on the water before Chase was ready to head home, so Ryan dropped the two of us off and we headed inside for lunch and Chase’s afternoon nap while the guys stayed out for a couple more hours.

By the time everyone was back home and Chase woke up, our stomachs were rumbling and Ben requested Alino Pizzeria pizza for dinner. 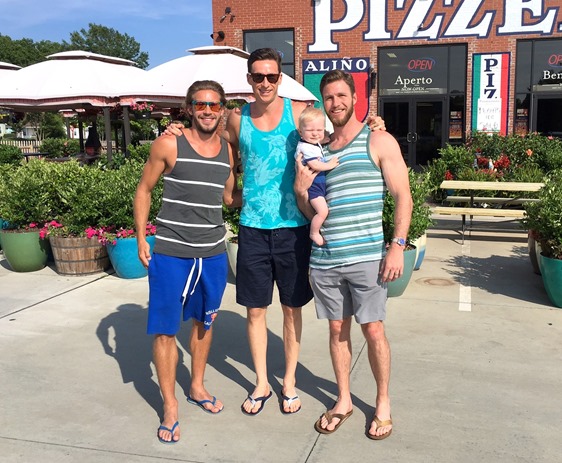 We took Ben to the local pizza hot spot last time he was in town and apparently the pizza made a lasting impression on him. We were more than happy to drive up to Mooresville for a few slices of our favorite pizza and ordered three pizzas for four adults and finished every last slice, as well as two caprese salads. (Their mozzarella is all kinds of fantastic.) 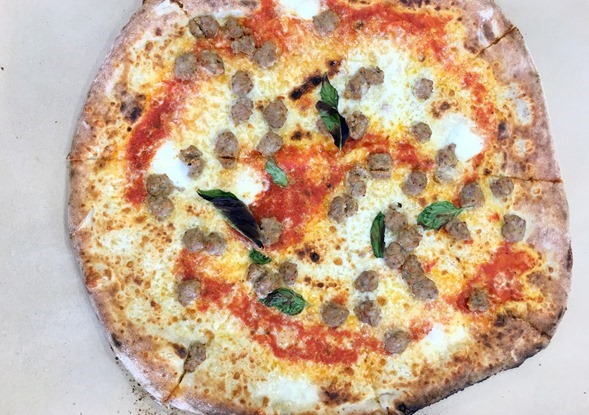 Whenever Ben comes to visit, we’ve made it a tradition to have an “ice cream party” every night and after our pizza dinner, we swung by Publix to pick up everything we needed for another ice cream sundae extravaganza.

We ate our ice cream while playing Bang!, the way-too-amusing game our friends Kevin and Chandra brought into our lives before they moved away a few months ago. (We miss them way too much!) 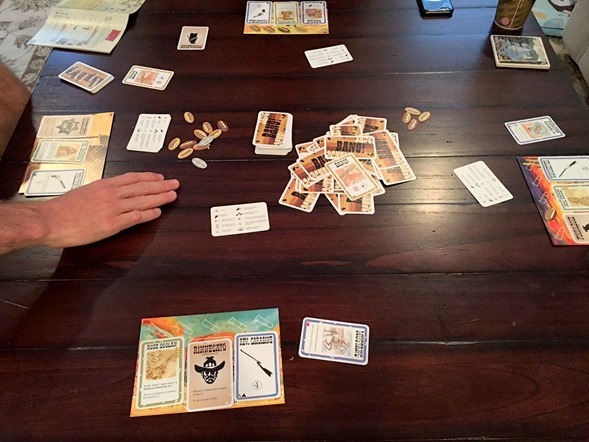 I think the boat and the sun drained everyone’s energy for a rockin’ Saturday night, so board games and ice cream sounded great to everyone which suited me just fine!

Ryan and I were up early on Sunday because Chase started making noises at 5:30 a.m., so I went in to feed him and he thankfully went back to sleep for a couple more hours before he was up for the day. This gave us a chance to ease into the morning a bit, so I prepped a batch of peanut butter baked steel cut oatmeal for everyone and while it baked, Ryan and I sat in our backyard and played fetch with Sadie while I sipped my coffee. I almost always use early mornings to get a jump start on work on the computer so it honestly felt rather special to actually take a moment to relax with my coffee while swinging on our backyard swing with Ryan. I’d love to begin every day that way!

Ben and Alan slept in until around 9:30 a.m., so while they were sleeping, we also managed to get Chase and Sadie out for a quick two-mile walk. 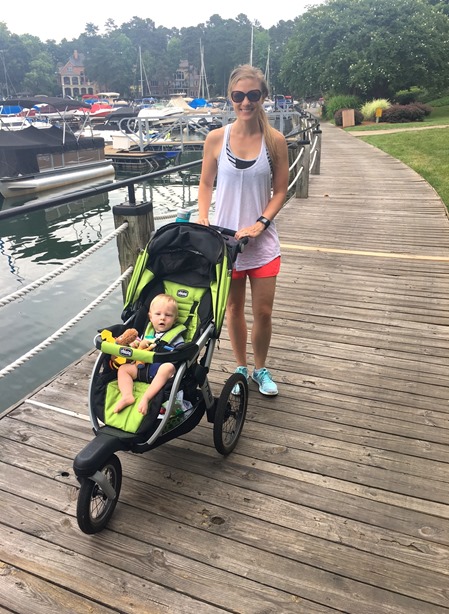 Once we were back at home, we unloaded the groceries before hopping back in the car and driving to a nearby beach for an early afternoon swim in the lake. It was slightly overcast but we still had fun splashing around with Chase and throwing sticks for Sadie. 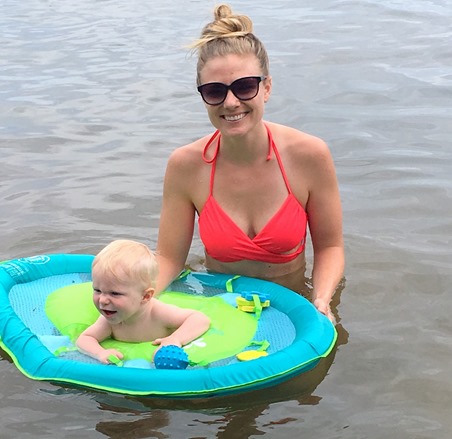 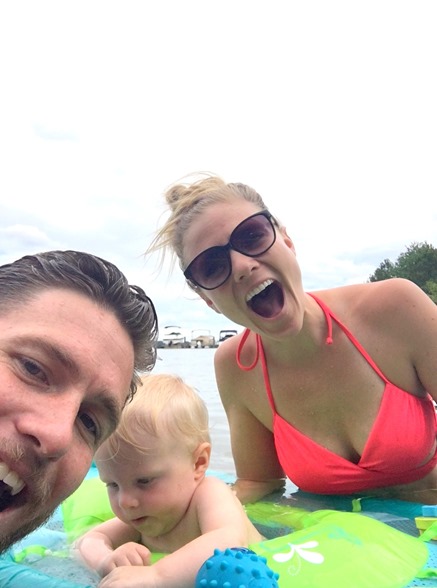 (My bikini top in the above pictures is from Victoria’s Secret this year which reminds me… Have you guys heard they will no longer be making swimsuits!? I’m so bummed!!!)

By the time we arrived back home, Chase was more than ready for his afternoon nap, so I nursed him and put him to bed before using his naptime to type up this blog post.

I’m hoping to spend the last few hours of our weekend prepping food for the week and relaxing. Hope you guys have a great Monday!
Follow my blog with Bloglovin