Even though it is so easy to microwave a sweet potato, whenever I take the time to slice it up, toss the wedges in olive oil and salt and roast them in the oven, I am always glad I made the extra effort. 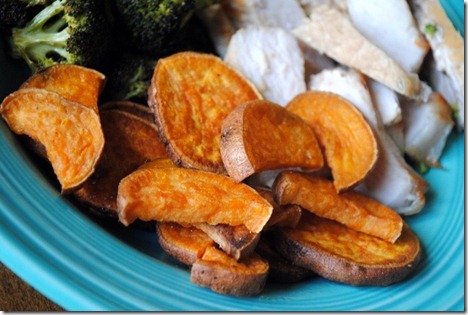 The sweet potato wedges stole the show this evening.

We ate them with roasted broccoli and pork, but I only went back for seconds of the potatoes. 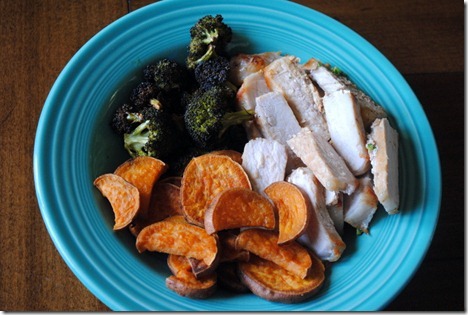 Now it’s time for the return of a long lost blog feature!

Questions of the Month: July

In March I started “Questions of the Month,” figuring it would be a neat monthly feature on the blog where I could answer some questions I received repeatedly that month. Well, the feature died a month after its debut because I completely forgot about it until a reader emailed me last week asking me if I planned to bring it back.

We use the Gentle Leader Easy Walk harness for Sadie and I cannot recommend it enough. 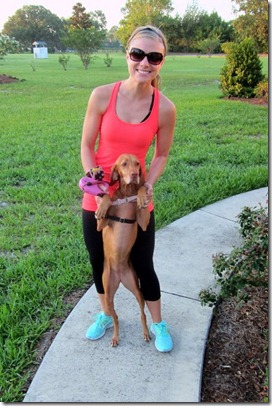 It goes around her belly and shoulders, leaving her neck free and doesn’t seem to bother her a bit. If Sadie tries to pull, the harness  basically makes her walk around in a circle. I makes walking or running with Sadie a lot more pleasant!

I got into running when I graduated from college. I found myself craving a new challenge in my life and began looking into running races, thinking that running a 5K would be a neat accomplishment.  I made it my goal to run the 3.1 mile race non-stop in August 2007. After that race, I ran a 10K and started training for my first half marathon in October using Hal Higdon’s novice training plan. I completed my first half marathon before the end of the year.

Blog posts related to half marathon training include: 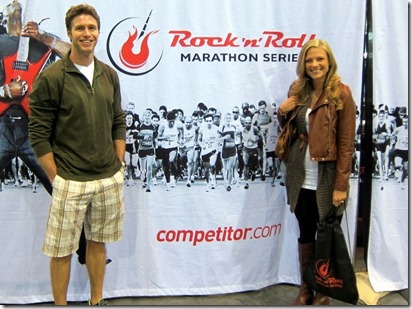