Navigation
Between a trip to the Riverbanks Zoo in South Carolina, running around Freedom Park in Charlotte and eating boatloads of ice cream on Saturday night (so much for hoping to reduce my sugar intake…), I’d say this weekend was a pretty darn good one.

The weekend kicked off on Friday night when I headed off to a baby sprinkle for my friend Lauren who is expecting her second baby in September. Chase, Ryan and Ryan’s dad went out for pizza and had a boy’s night while I enjoyed quality time with my girlfriends, distraction-free. I stayed out way later than expected for a baby sprinkle but had so much fun. (And to address the elephant in the room, of course parts of the sprinkle were hard but I’m trying to focus on what we do have at the moment, not what we lost and what we’re longing for in the future. That is easier said than done… but it is getting easier day by day.)

I fell asleep within 10 minutes of climbing into bed on Friday night which is a huge victory for me these days. I woke up on Saturday ready for a day of fun which was a good thing since Ryan suggested a trip to Riverbanks Zoo for our little crew! 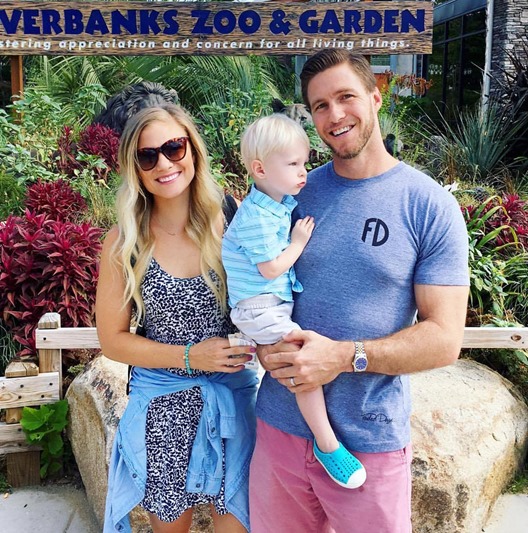 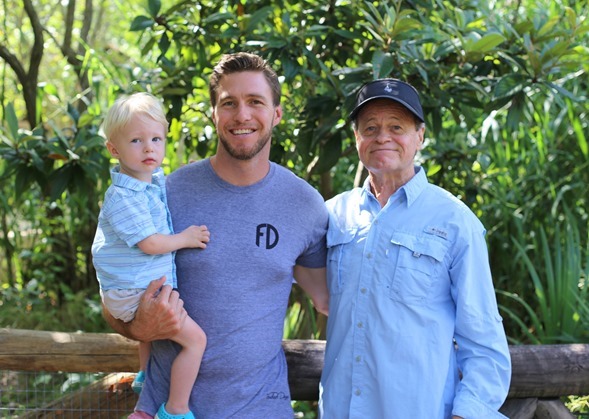 We arrived at the zoo just before 10 a.m. and immediately took off to see the elephants! 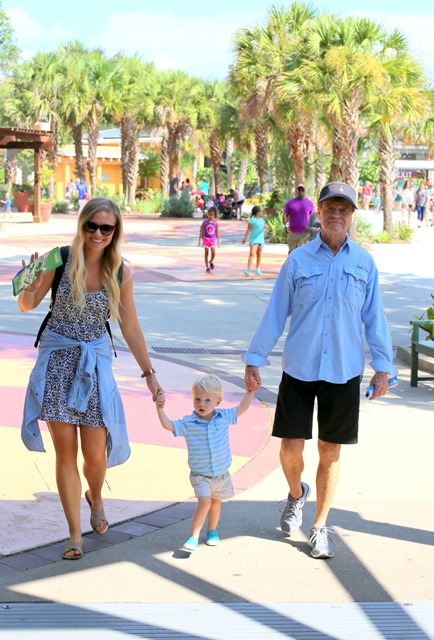 Chase is a huge animal lover and zoos and aquariums are almost always a huge hit with him these days. The Riverbanks Zoo was no exception! Ryan, Greg and I were all very impressed with the overall cleanliness of the zoo and the beautiful layout. Compared to the North Carolina Zoo, the Riverbanks Zoo was a little on the smaller size but there was more than enough to see and do with an energetic two-year-old. 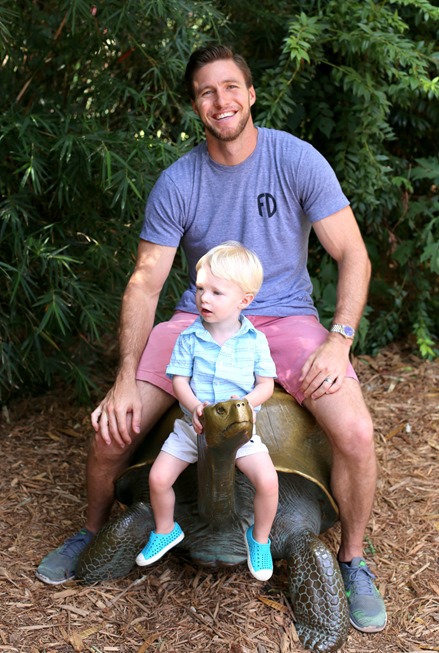 The highlight of the zoo trip for Chase came when we spotted a carousel and he immediately wanted to hop aboard. As we went to select an animal for Chase to ride, he eyed a “gee-raff” (giraffe) and an intense love affair began. The giraffe was quite the hot commodity and another kid quickly claimed it before we could get on. When I tried to distract Chase with other options he absolutely refused to sit down. (How toddlers can mold their bodies into their parents’ waists to make it impossible to put them down, I’ll never know.) We ended up waiting another turn and bee-lined for the giraffe when the merry-go-round came to a stop. 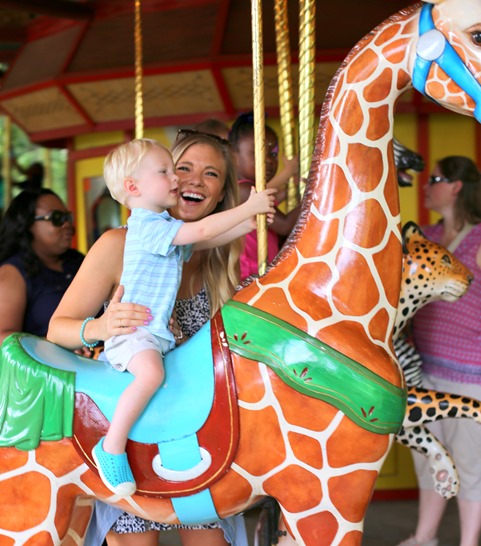 Chase’s favorite part of the carousel was looking for Ryan and Granddad every time we’d circle around and showing them how he could ride with no hands.

I was prepared for meltdown territory when he got off the giraffe but he pet his giraffe on the nose, told it “night night” (apparently it was naptime?) and we were off! 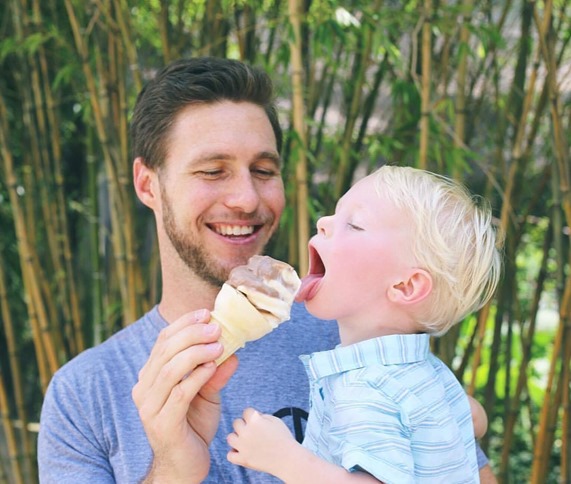 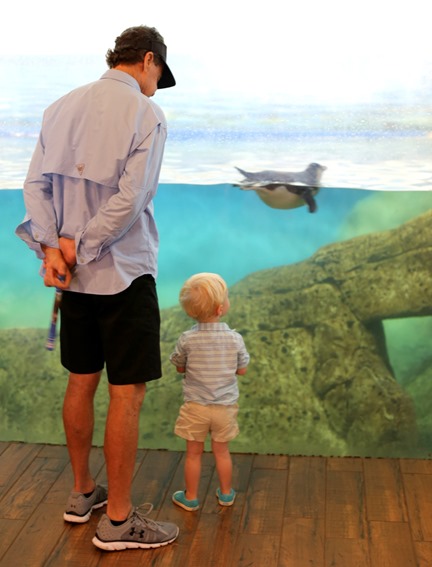 We all thoroughly enjoyed looking at the animals (the penguins put on quite a show!) and once we realized we had seen everything, we figured we’d take a quick peek at the gardens before heading home. 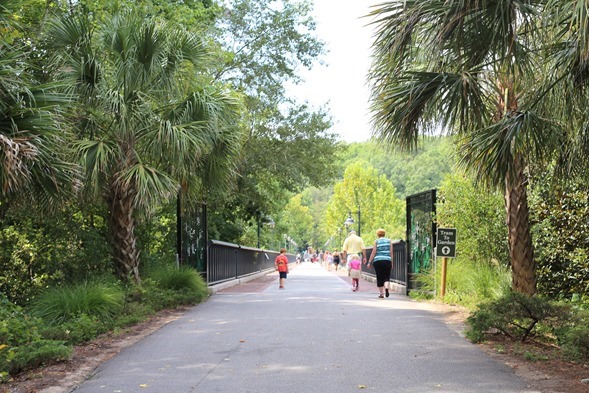 I’m SO glad we didn’t skip out on the garden part of the zoo because it was basically a kid’s paradise! They had a splash zone, lawn games, big tree houses and plenty of things for kids to do and explore in addition to the beautiful botanical gardens. (If we lived in the area, I’d absolutely want a membership to this zoo for the gardens alone!)

We wrapped up our day at the zoo around 1:30 p.m. and Chase crashed hard in the car on the way home, but only for 30 minutes. Thankfully he woke up in a pleasant mood and we read stories and played in the backseat for the next hour or so before we swung by the grocery store to pick up stuff to grill out at home. Our initial plans to go out to dinner in the city fell through thanks to a babysitter cancellation but it ended up being a blessing in disguise since we were all pooped after our day at the zoo and quite content to hang out at home.

Our friend Ben came over to join us (he’s a great friend of ours from our Florida days and moved into the area last month from Orlando) and we spent the rest of the night relaxing at home and eating an inordinate amount of ice cream. 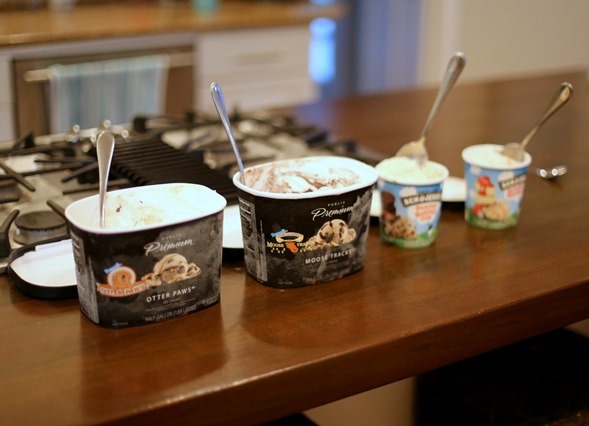 Ryan, Greg, Ben and I all share an intense love for ice cream and I’m pretty sure the 10-minute conversation we had about what would go into a quality ice cream review – texture, flavor, testing the ice cream right out of the carton vs. 5 minutes after it’s been sitting out – (<— key for Ben & Jerry’s since it’s so hard right out of the carton) would’ve been mind-numbingly boring for many people but we got way too into it. And I just realized even writing about this discussion on the blog probably put some of you to sleep. Whoops.

Chase managed to sleep in past 7 a.m. on Sunday morning and I took full advantage and remained in bed as long as possible while Ryan and his dad took Sadie out on an early-morning walk.

Once everyone was back home and Chase and I were up and ready for action, we drove a little south of the city to pick up lattes and morning glory muffins at Sunflour Baking Company before spending a few hours at Freedom Park. 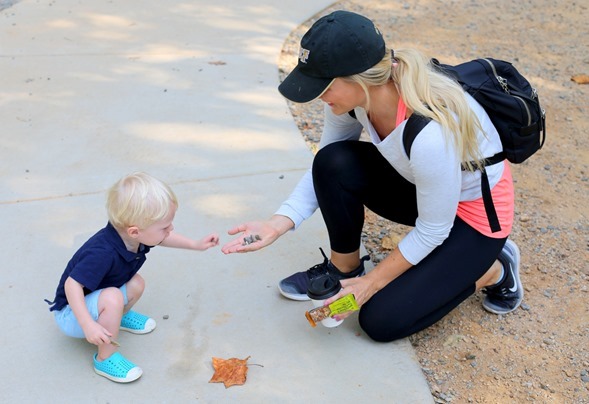 On our way to the park, we popped into CVS and I quickly snagged a few healthy snacks to help fuel us through morning park playtime. (Disclaimer: The next portion of this blog post is part of my sponsored partnership with CVS, a brand I’ve been working with for years and regularly use in my personal life as well!) 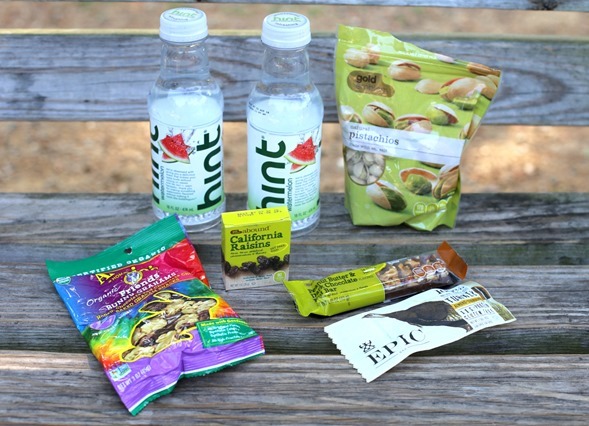 Can you tell I couldn’t resist digging into the pistachios on the drive over?

CVS is focused on adding more “better-for-you” options in their stores (175+ organic items!), and that’s a big reason we pop in to grab healthy snacks so often (and impulsively buy things like nail polish and another pinky-coral lip gloss I probably didn’t need).

Chase is in love with basically anything from Annie’s and now that his friend Lilly loves raisins, he does, too, so I grabbed those snacks for him, as well as some nuts, healthy snack bars (if you’re a fan of jerky, you must try EPIC bars!) and my favorite watermelon flavored waters. 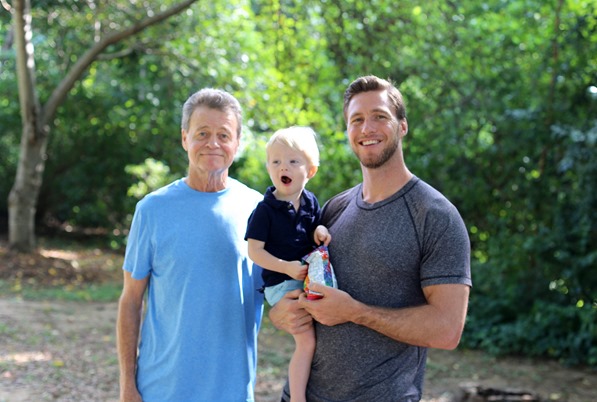 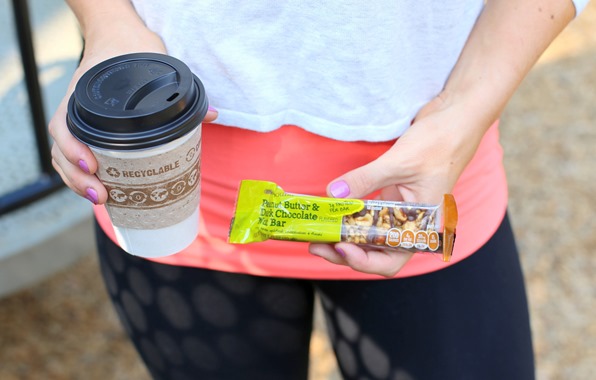 While we were at the park, we spent quite a lot of time on the playground before making our way over to the mock NFL training course where Ryan and Chase practiced sprints and worked on their agility. 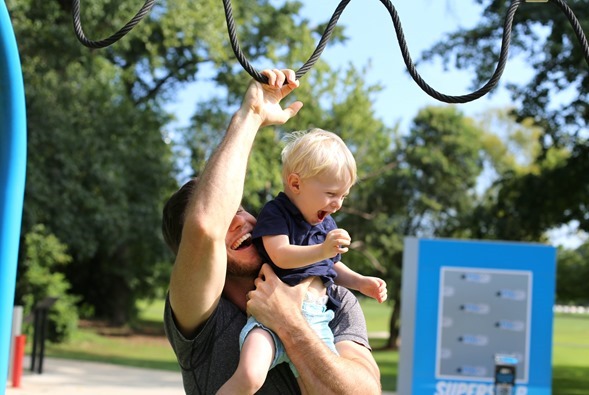 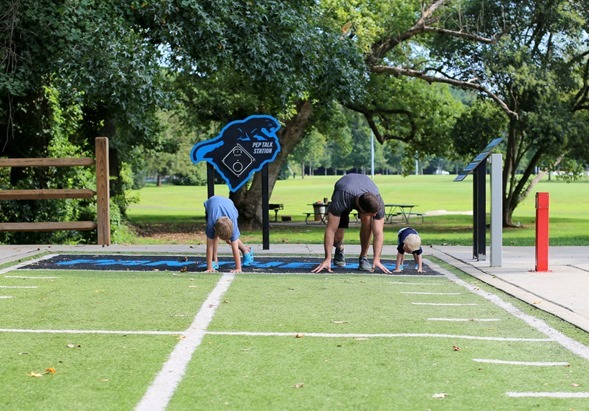 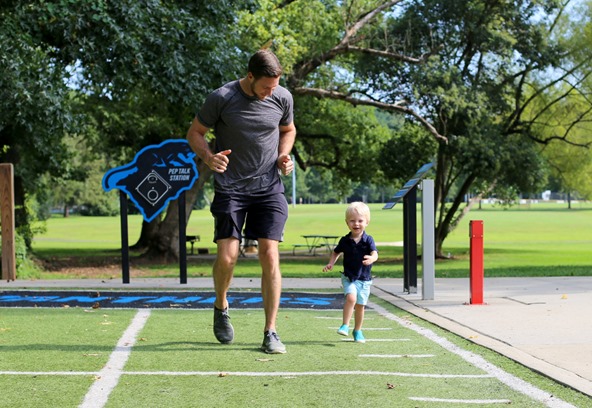 No trip to Freedom Park would be complete without a stop by the big pond to say hi to the ducks! 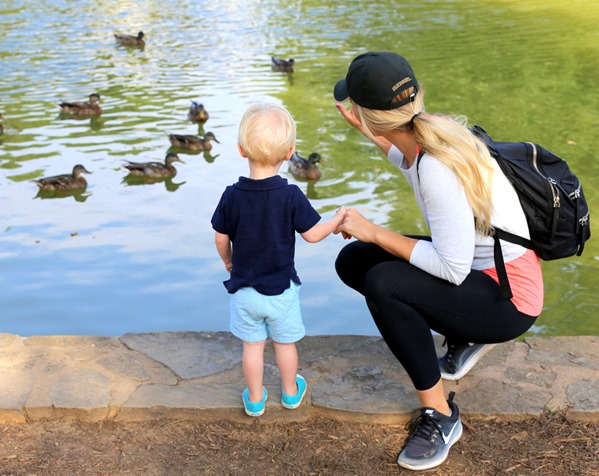 We made our way back home in time for Chase’s nap which was much-needed. While he snoozed away, Ryan and Greg went to the gym and I worked on this blog post before prepping some food for last night’s dinner and the week ahead.

We spent the rest of our Sunday close to home, enjoying quality family time. Ryan and I also spent an hour of our Sunday afternoon at Chase’s new preschool for orientation. I cannot believe he will be off to preschool in a couple of weeks! (He’ll only be going two days a week for three hours at a time, but still! I’m surprisingly way more emotional about it than I expected!)

The orientation went well and I’ll bring Chase by the school next week for a Meet-the-Teacher morning and I have a feeling that will make everything feel even more real! (Quick question: Do you guys bring your kids’ teachers gifts to kick off the school year? I’ve seen this all over Pinterest and while I’m definitely more than happy to do so, I don’t remember this being a thing when I was in school. I have lots to learn!)

I hope you guys all had a great weekend and enjoy the week ahead! Thanks for stopping by the blog today!

Disclosure: I’m proud to be working with CVS Pharmacy to help spread the word about #BetterHealthMadeEasy and how to #FindYourHealthy. All opinions expressed are my own, and all product claims or program details shared should be verified at CVS.com or with the appropriate manufacturers.