Navigation
Much of our September felt marked by travel — both for me and for Ryan — and so it felt really, really nice to have a weekend at home with zero plans on the agenda. Well, technically, we had one BIG plan on our to-do list: Celebrate Ryan’s 36th birthday! Still, at the birthday boy’s request, we wanted to keep things relatively low key and enjoy some birthday fun as a family.

Ryan arrived home from Orlando on Friday evening (his work travel has really kicked up a notch, though I don’t mention it much on the blog for safety reasons) and we had just enough time to do the boys’ nighttime routine together before everyone was ready for bed. An early bed time on Friday night meant we all awoke ready for some adventure on Saturday morning!

Ryan’s birthday was on Saturday and he was all-in on spending most of his day with me and the boys at a local farm. 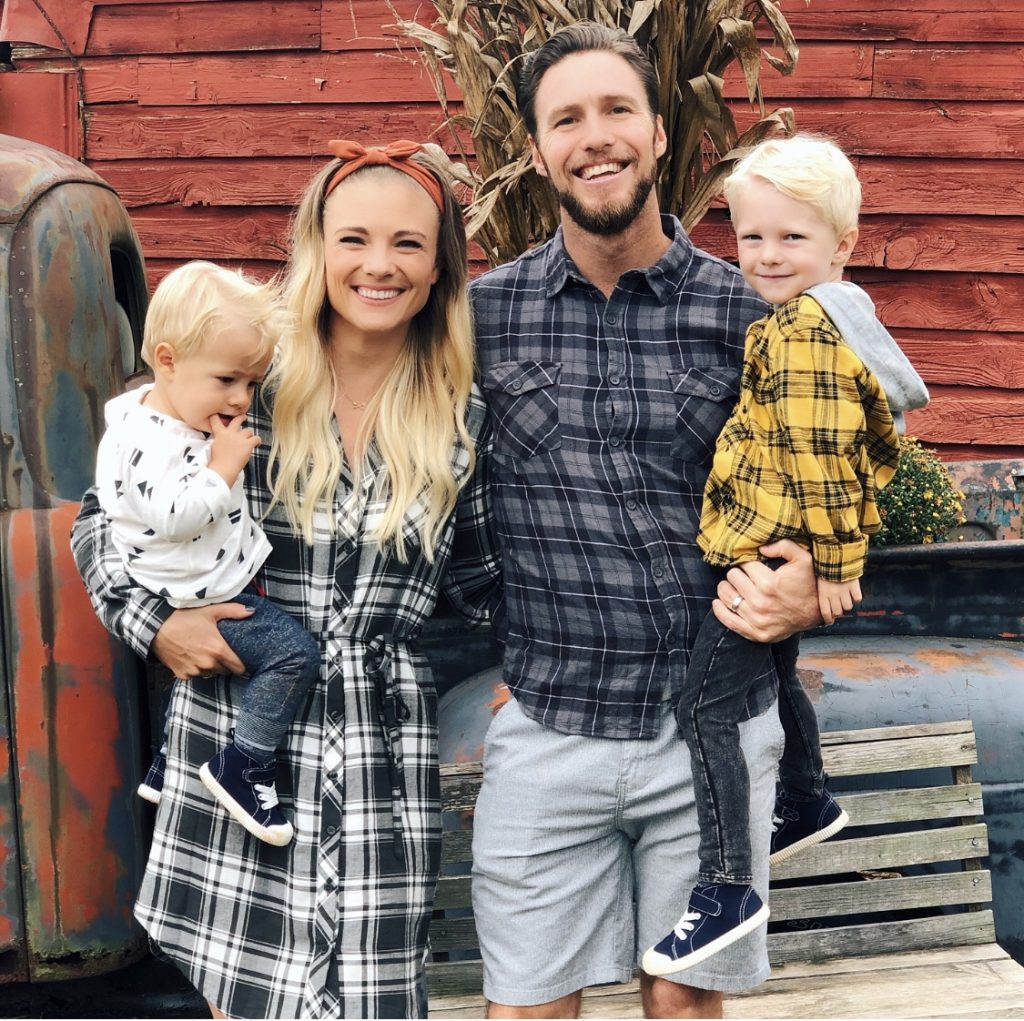 (Dress: Market & Spruce via my most recent Stitch Fix delivery — this style from Gap is similar! / Tie-Knot Headband: Aerie)

We drove up to Mount Ulla, North Carolina to Patterson Farms and took full advantage of everything the farm had to offer from the tractor rides and animal feedings to the playground and pumpkin patch. 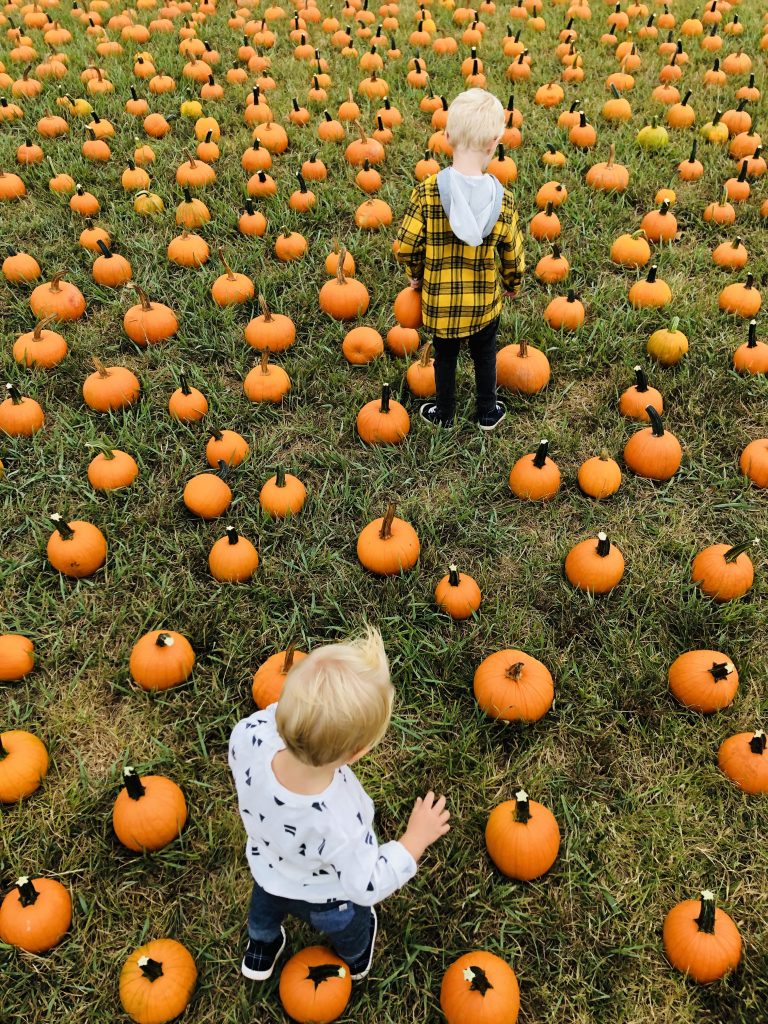 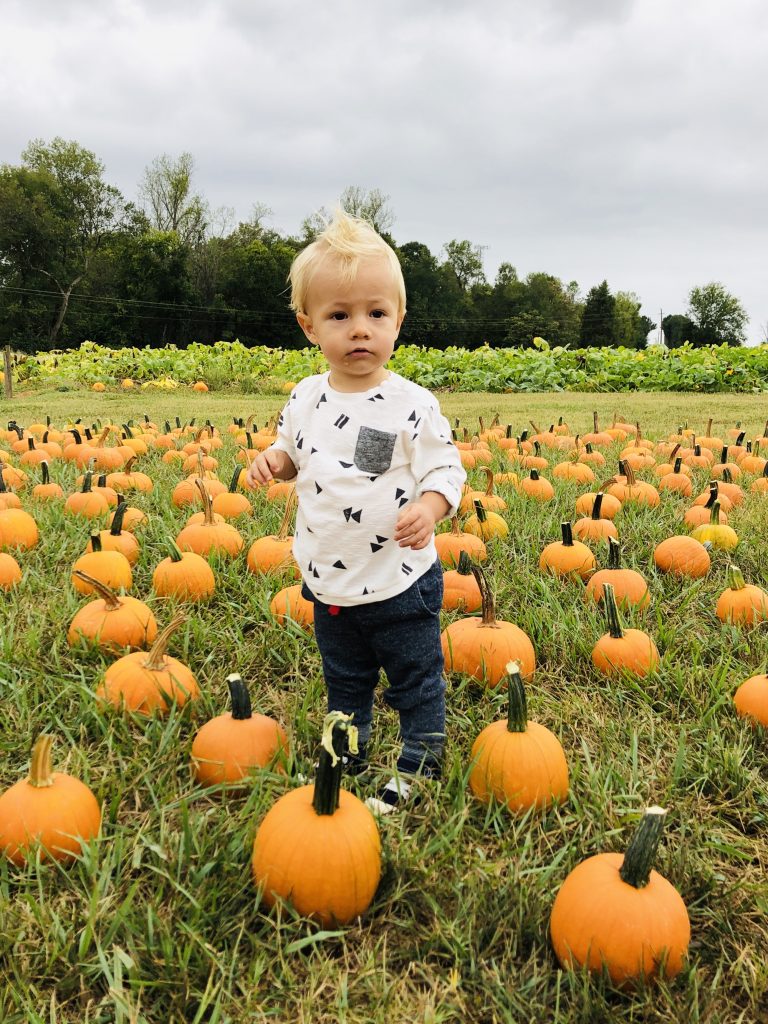 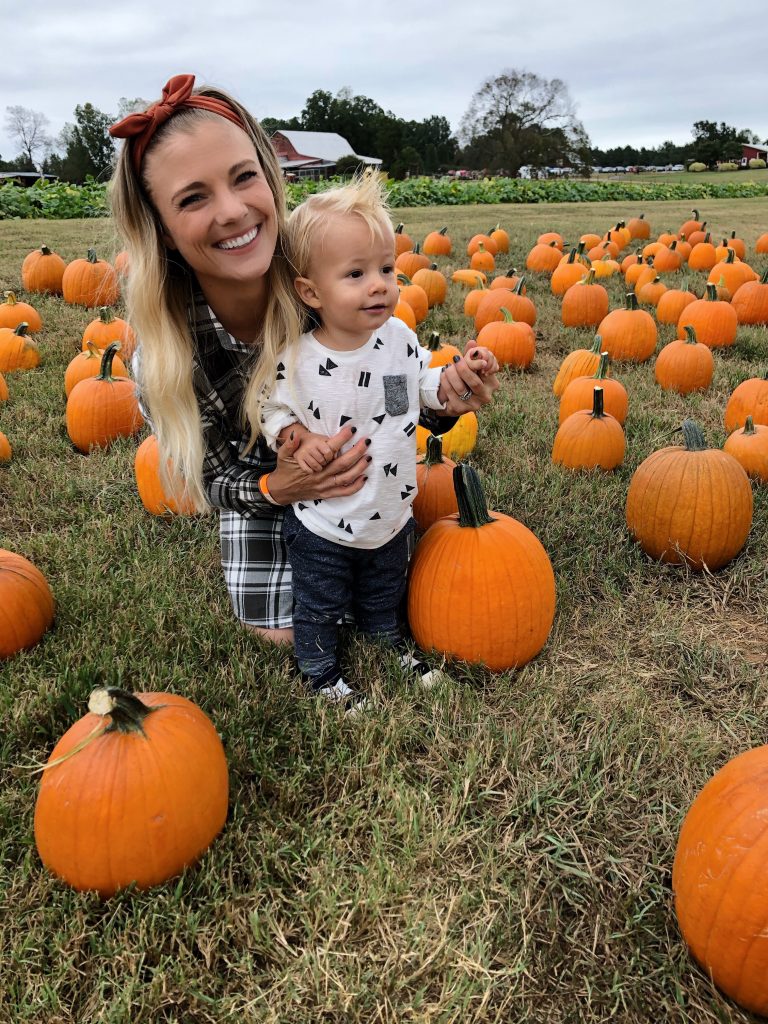 For any local readers out there, Patterson Farms is one of the best spots for kids if you’re looking for a family friendly pumpkin patch with more than just pumpkins. It has a ton of stuff to do and we easily spent a few hours on the farm. The boys loved the animals and the outdoor play area (it’s HUGE) and the various activities. 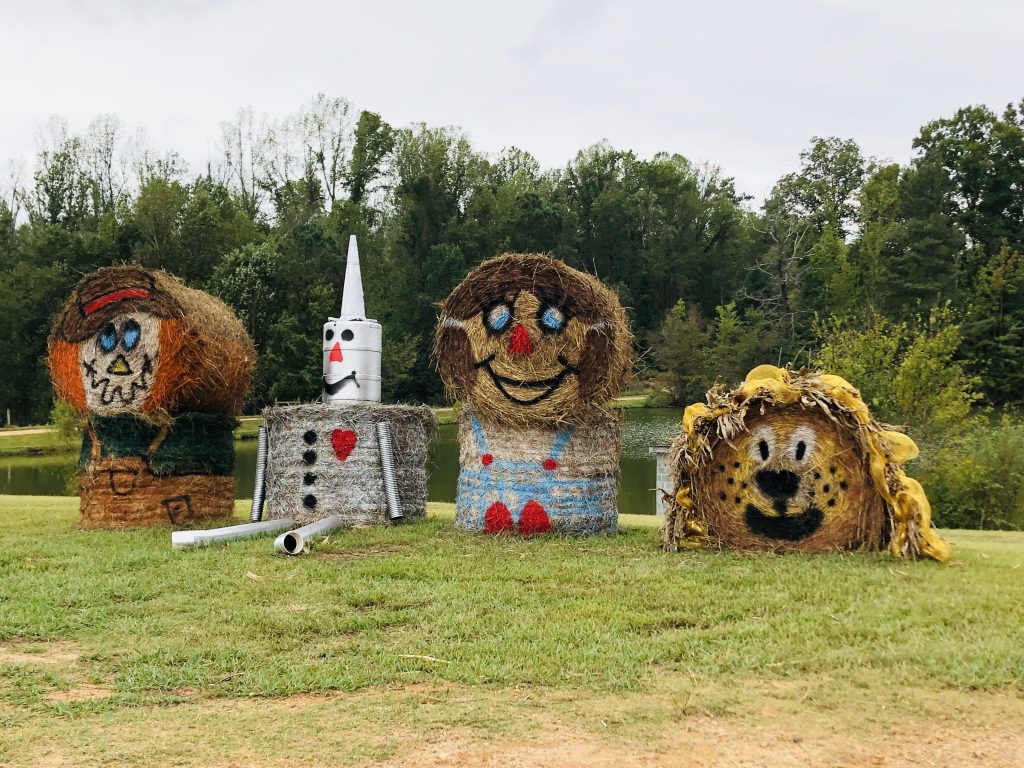 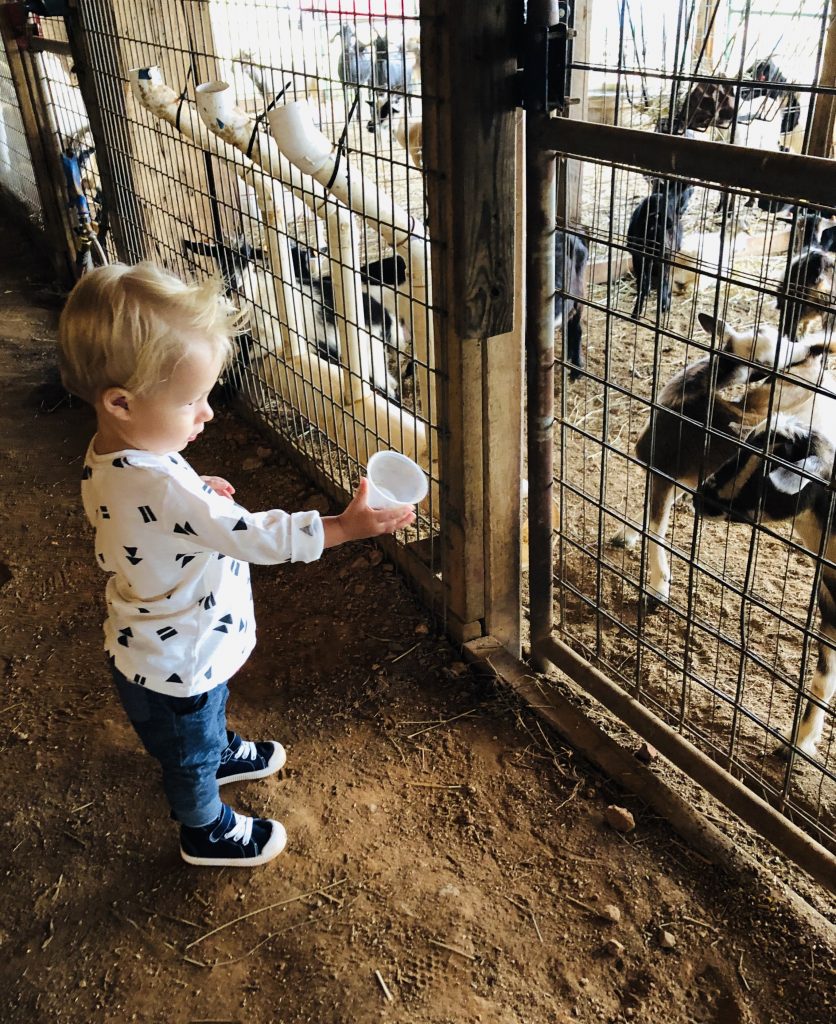 Watching Ryder muster up his courage to feed the goats from his little cup melted me. So sweet.

Chase was all-in on the pony rides and selected a pony named “Fancy” to ride because he liked her name the best. 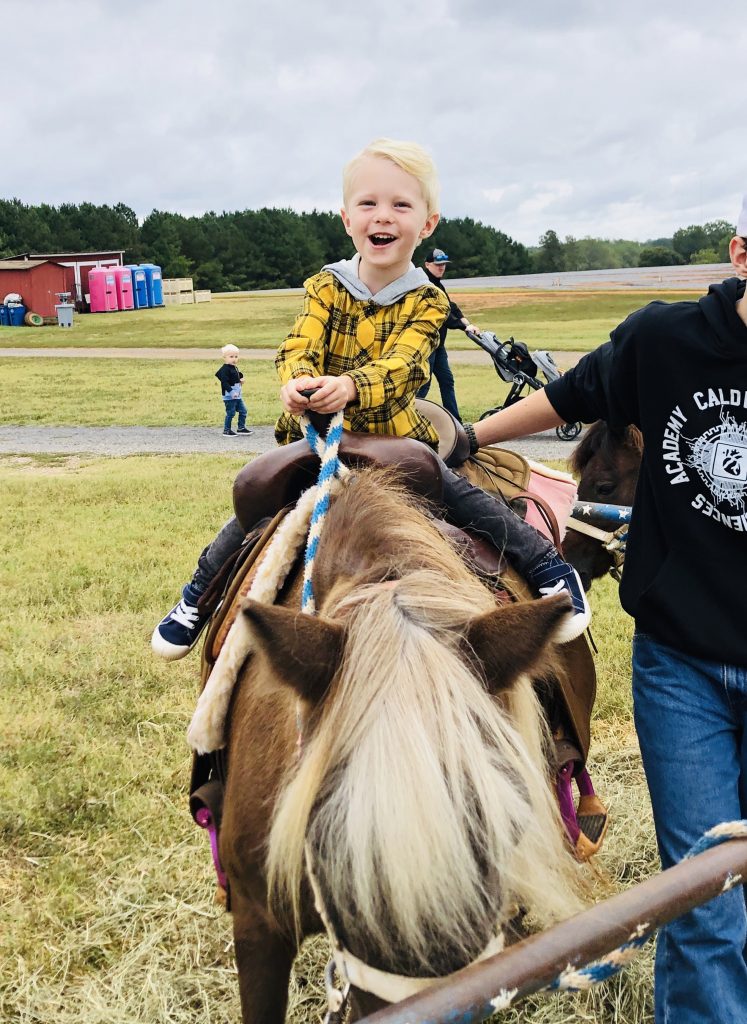 (Also, I randomly got a lot of DMs about Chase’s outfit on Insatgram when I shared this photo on IG Stories, so here are the details: Top: Sovereign Code from his recent Stitch Fix Kids delivery / Black denim jeggings: H&M / High tops: H&M — ordered them for both boys and love them!)

Two unexpected highlights during our time at Patterson Farms included the tomato slingshot launch and the tomato cannon. 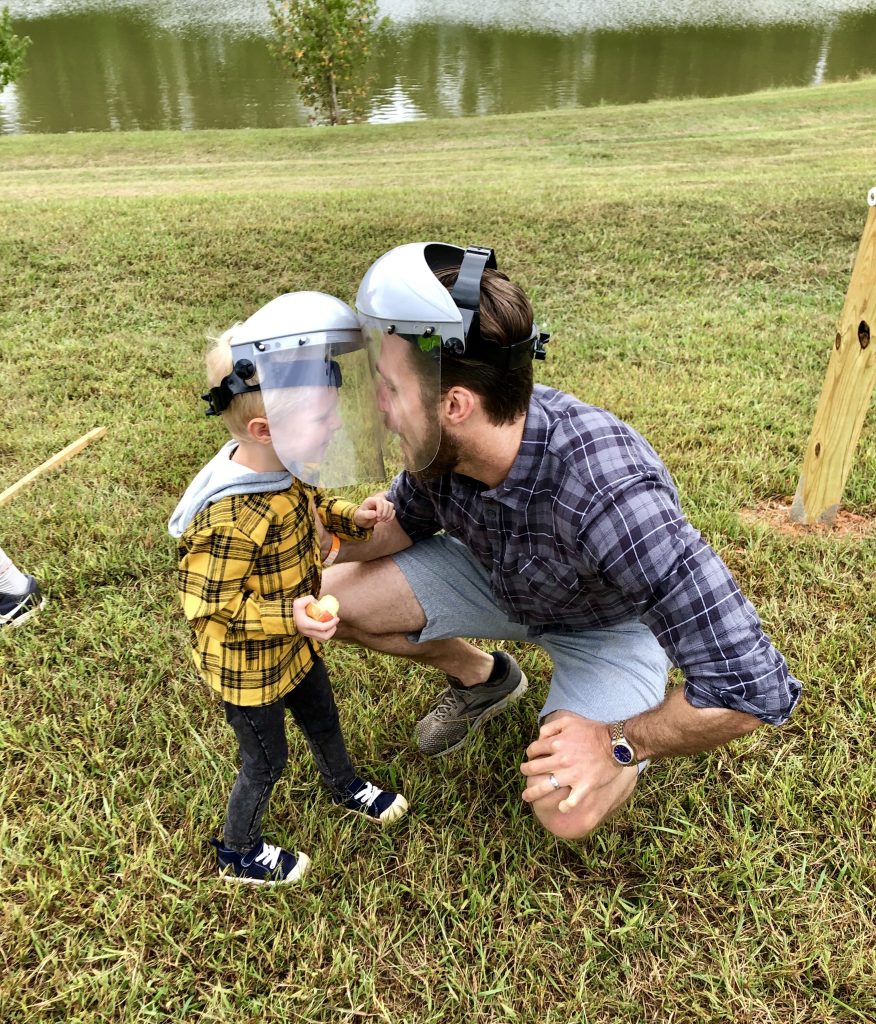 Though kids have to be 8-years-old to do the cannon or slingshot, Chase was still able to put on a face mask and “help” us launch tomatoes across a small pond. We figured they wouldn’t go too far but the launchers ended up being seriously legit and the tomatoes went flying!! It was awesome!

We stayed at Patterson Farms for several hours until our stomachs told us it was time to head out for lunch. Ryan’s favorite spot for pizza in the area is Alino’s (it’s my fav, too!) so we planned to grab pizza for lunch and eat it outside so the boys could run around as we ate. 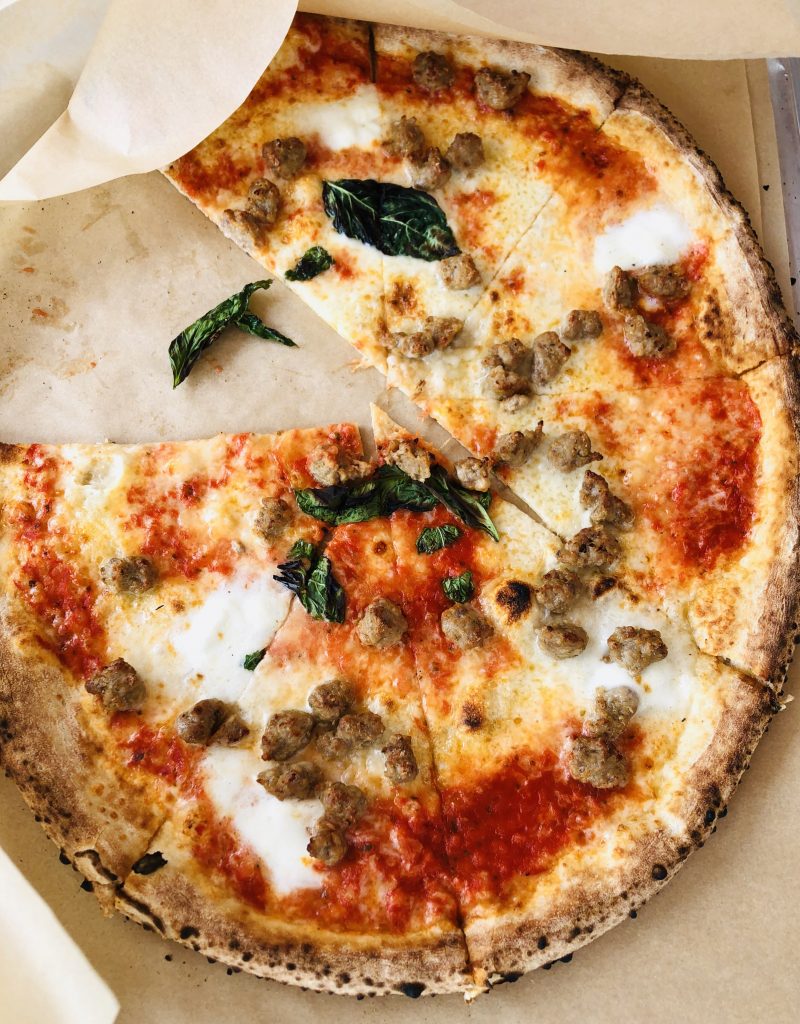 By the time we made it home, Ryder was ready for his nap and while he slept, Ryan and Chase headed out to take Sadie on a walk around the neighborhood while I began decorating our house for fall! Once Ryder was up again and everyone was back home, we hung out at home for a bit before taking our crew to Lowe’s to pick up some mums to go along with the plethora of pumpkins we bought at Patterson Farms to decorate our front porch for fall.

Of course a trip to Lowe’s is never complete without Chase riding the tractors. Ryder coerced Ryan into the fun as well with a bunch of toddler pointing and “ah ah ah” noises. 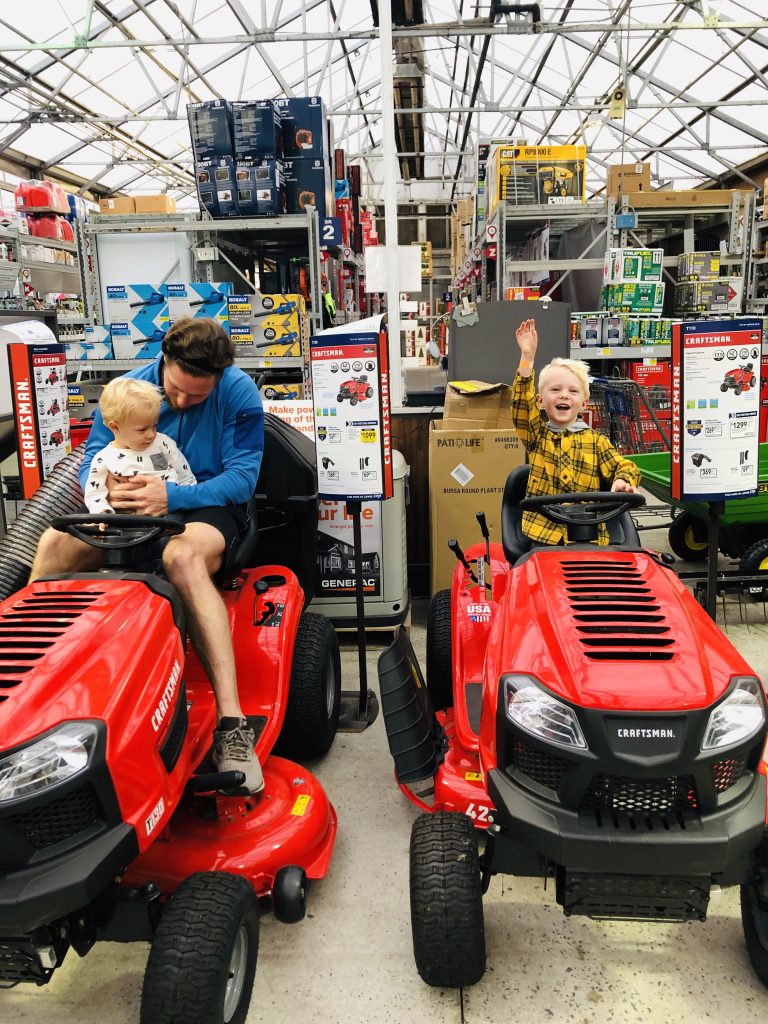 By the time we made it home, everyone was ready for dinner and it was time for Ryan to open his presents!!

We got him a bunch of random things but I was most excited to give him two blast-from-the-past gifts I found for around $10 each. 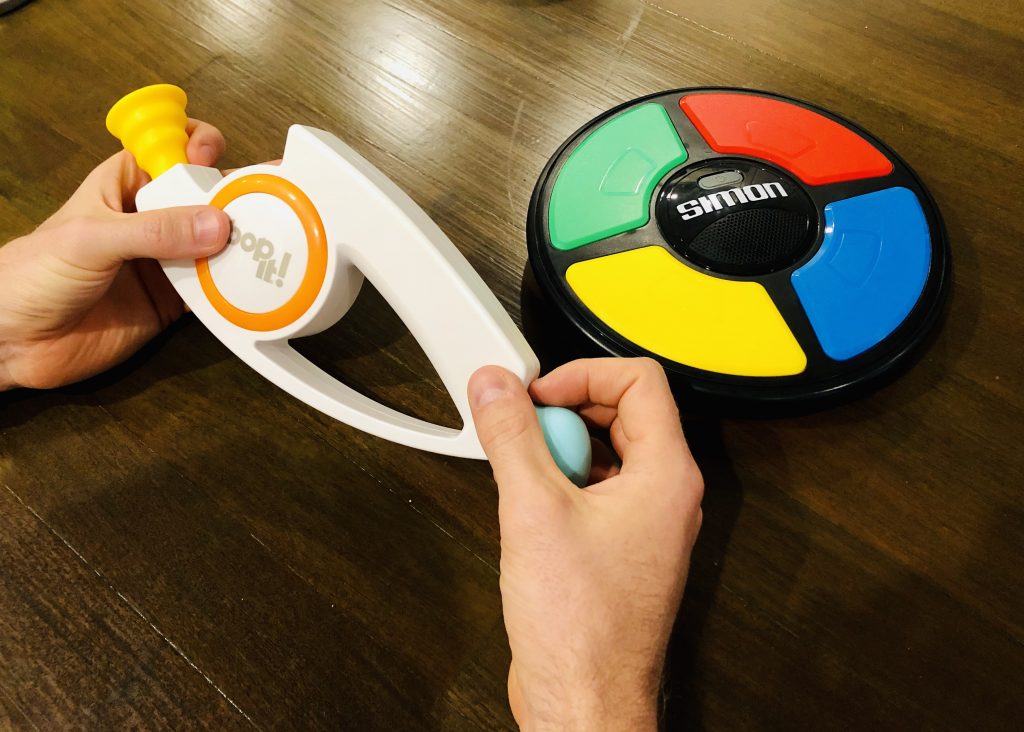 Bop It and Simon! Please tell me you guys remember these games!? To say they were a huge hit with Ryan is a big understatement and we played them a bunch throughout the rest of the weekend. Keep this idea in mind for a random holiday/birthday/Father’s Day gift out there for someone who loved these games as a kid because they were a slam dunk! (Also, I was shocked at Chase’s ability to play Simon fairly well already! He and Ryan also made up a Father/Son version of Bop It where Ryan was “bop it” and “pull it” and Chase was in charge of “twist it” and they got really good at their made-up version!)

We all managed to sleep in a bit on Sunday morning which felt like a treat. By the time we had everyone up and fed and dressed, we didn’t have too much time to waste before the 9 a.m. siblings class at MyGym! We ended up being the only family in the class which was actually a blast because we basically had free playtime with the boys all over the awesome MyGym equipment. 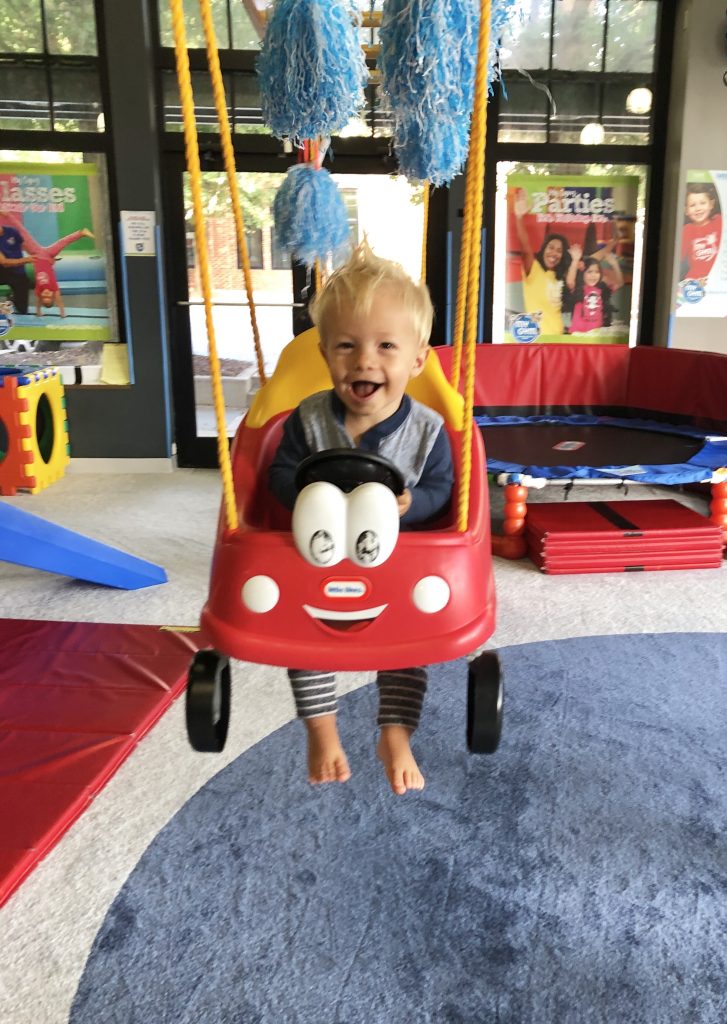 Our post-MyGym plans took us to the Carolina Raptor Center where we met up with our friends Carrie and Nick and their kids. 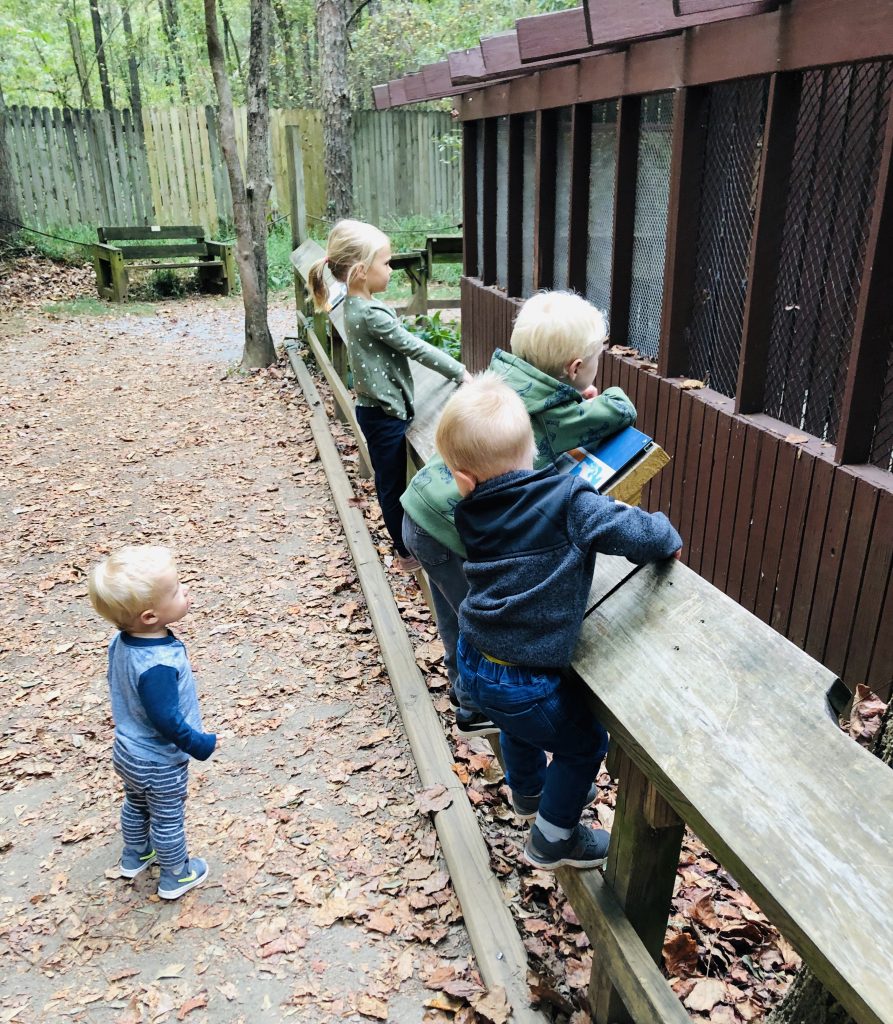 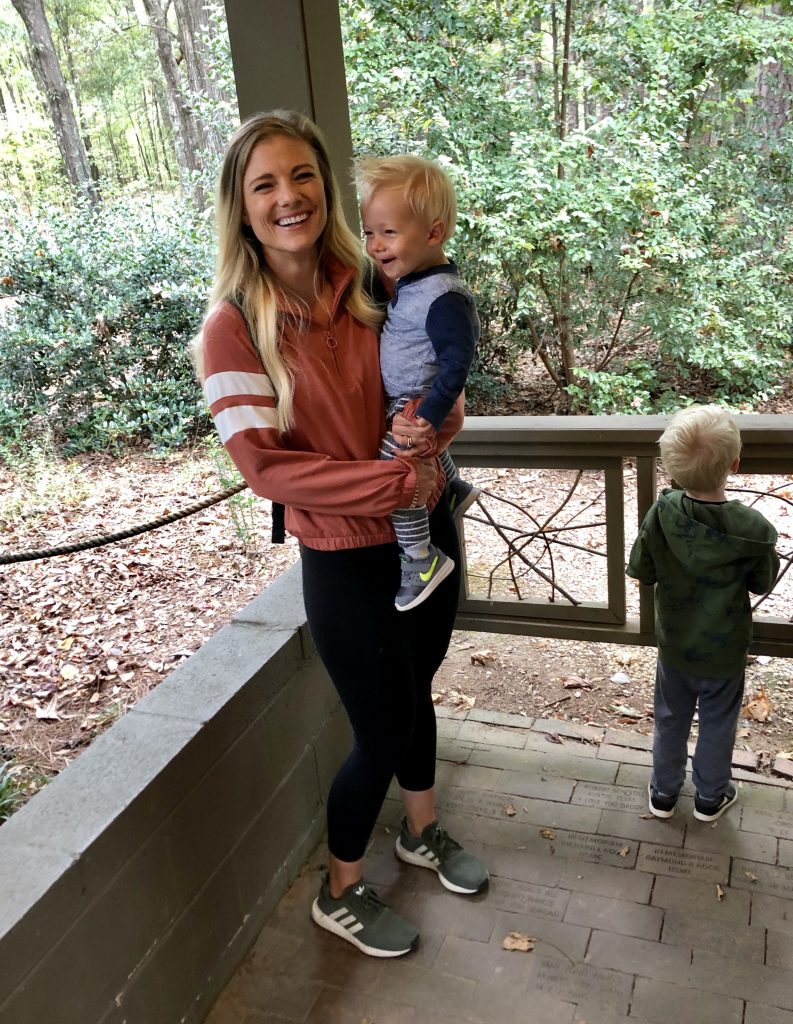 We were able to see some raptor feedings which fascinated the kids! Clearly the Raptor Center took a lot out of the littlest member of our crew because Ryder was asleep within two minutes of our drive home. Since the drive was around 25 minutes, his cat nap basically ruined his nap for the day. We tried our best to get him to settle again but a #2 in his diaper had him calling for us from his crib and a longer nap just didn’t happen.

Since both boy seemed to be in nap-skipping moods, we hung out around the house with the Panthers game on in the background and I did a little food prep for the week while everyone played. Eventually we loaded the boys in their stroller, leashed Sadie up and headed off on a walk to the park in our neighborhood for a little afternoon adventure. The weather this weekend was perfect — upper 60s on Saturday and a high of 80 on Sunday — and we were all in heaven!

The rest of our evening included pasta for dinner, plenty of rounds of Bop It and Simon and an EARLY bed time for the boys. As for the week ahead, it is a typical week around here for our crew, though Chase doesn’t have school on Wednesday due to a teacher work day. I also have plans to get together with friends for a birthday celebration on Tuesday night which should help break up the week a bit. I hope you all have a wonderful Monday!