We last left off around breakfast time on my second day in San Francisco, so let’s pick up there, shall we?

After breakfast, we walked to Union Square, a beautiful park in the middle of San Francisco, to check out the main event that was sponsored by Smartfood. 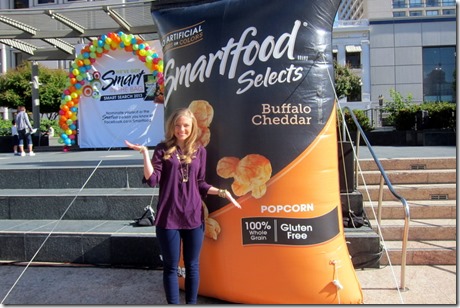 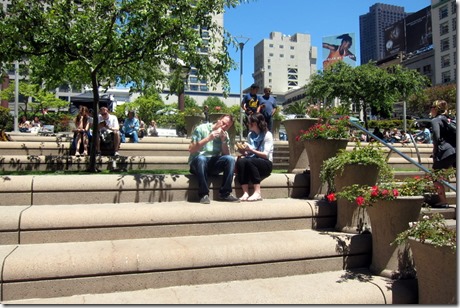 Smartfood took over the park and throughout the day team members passed out full bags of Smartfood popcorn, hummus popped chips and puffed corn to San Francisco residents and visitors. 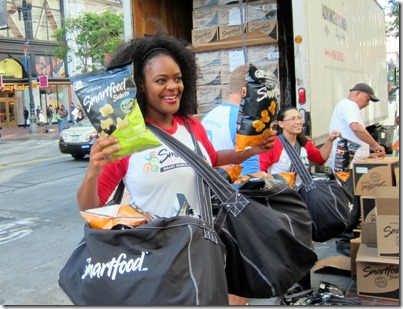 The brand reps were stationed at various spots throughout the city, so it seemed like everywhere we went that day we saw people walking around with full bags of Smartfood snacks. It was a city takeover! If you can get your hands on a bag of Smartfood Selects Sour Cream Onion Puffed Corn, I highly recommend it. It was my absolute favorite! 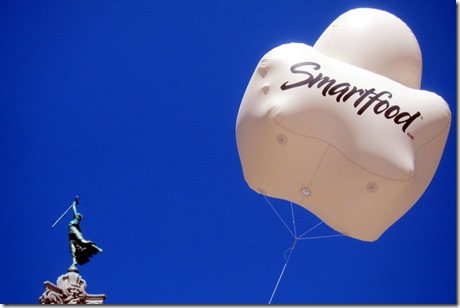 Smartfood, with the support of SELF magazine, came together to create a list of the top 10 SMARTest cities in America, based on a number of criteria. San Francisco claimed the top spot, so the big event that took place yesterday unveiled this exciting announcement and congratulated the city on their efforts to live SMART. 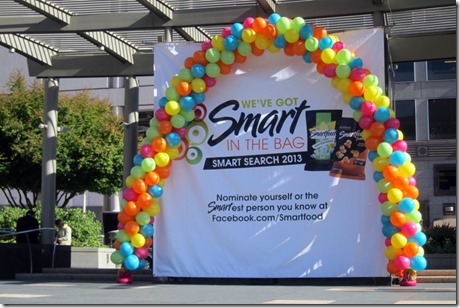 The brand broadened and redefined the word “SMART” and created an acronym that spoke to the five criteria the company took into consideration when determining the SMARTest city. 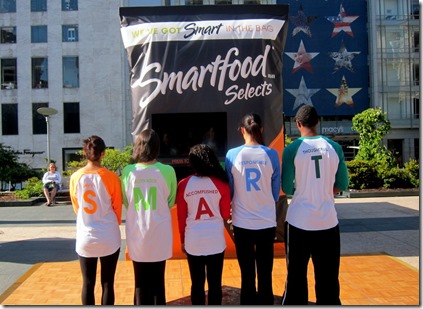 Some fun facts about San Francisco:

At around noon, the big announcement was made by Brooke Burke-Charvet! 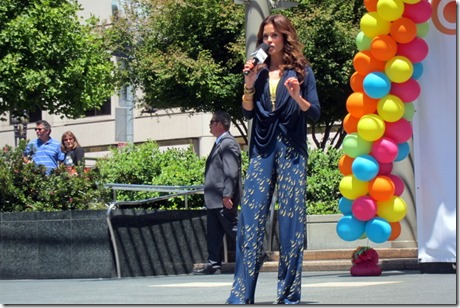 Sarah and I joked that you can spot a celebrity by their fabulous hair.

Our group of bloggers had the chance to briefly speak with Brooke in a round table format and she seemed like a very kind person. It’s clear that she is very family oriented and believes in living an active lifestyle.

Here’s a short video of our quick Q & A with Brook and SELF magazine fitness editor, Marissa Stephenson:

I had such a good time chatting with Marissa. She was such a fun person! 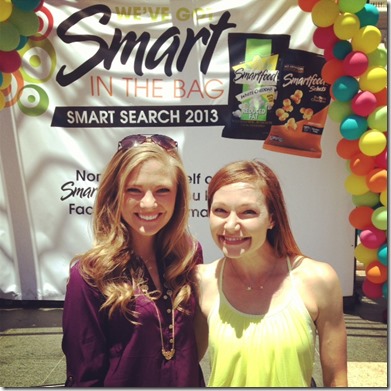 Marissa was absolutely bursting with energy and fitness is clearly a huge part of her life. She was so passionate when she spoke about exercise that it made me want to bring her back to Florida with me to motivate me on days when I’m feeling less than enthusiastic about my workouts. She is only 30 years old and I was so impressed by all that she has accomplished in her writing career. 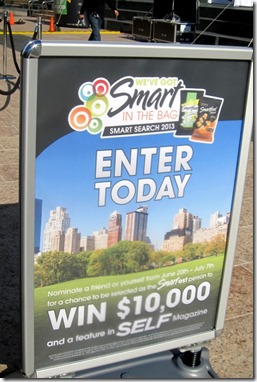 If you think that you or someone you know is savvy, motivated, accomplished, responsible and thoughtful, you can visit the Smartfood Facebook page to submit your nominations for a chance to win $10,000. The winner will also be featured in SELF magazine and everyone who enters will receive a buy one, get one free coupon for Smartfood products.

Just in case you were curious about how other cities ranked in the SMARTest city rankings like I was, here’s a list of the top 10 SMARTest cities, as determined by Smartfood and SELF magazine:

Apparently those of us who live in the south need to step it up!

The rest of the day at Union Square was spent enjoying the fun games and contests that took place all around the park!

My favorite game of the day was a trivia game that gave prizes to everyone who correctly answered a trivia question. 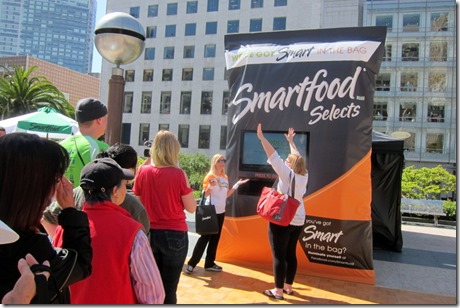 I am a big fan of trivia, so this was right up my alley. 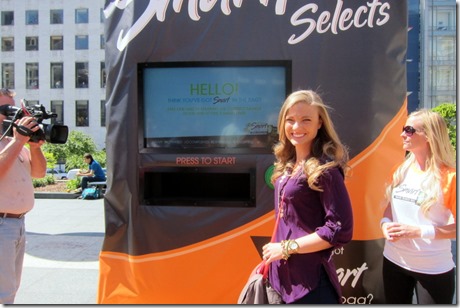 I ended up winning a water bottle! 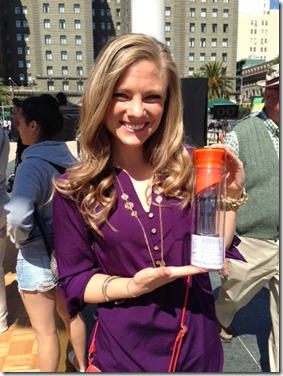 The kid behind me won a Kindle! The prizes were really awesome and included $50 gift cards, Kindles, solar phone chargers and more. It wasn’t your typical “here’s a keychain with our logo on it” kind of promotional trivia game. It was very popular and a long line formed early in the day and lasted through the afternoon.

Another activity that was quite popular was the rubix cube challenge. There were professional rubix cubers (that can’t be a real word) who came out to compete for the chance to win a Smart car! 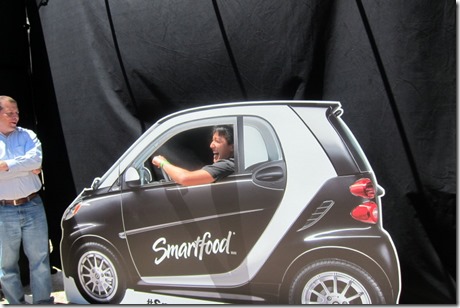 The man that won completed it in 23 seconds! 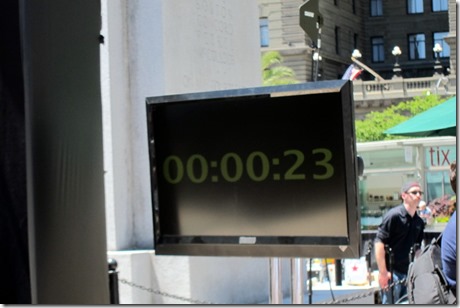 He said his record was 11 seconds, which is unreal. Apparently there’s a strategy to it that doesn’t involve peeling off the stickers to win. Who knew!?

During our time at the park, I also had the chance to meet a bunch of you guys who stopped by to say hi and I want to say a big thank you to those of you who took time out of your day to hang out with me! It is always so fun to meet readers, so I really appreciate it!

Once the event was officially over, before heading back to our hotel, Sarah and I needed a real meal and stopped for lunch. I ordered a three cheese sandwich on herb bread from Specialty and inhaled it! 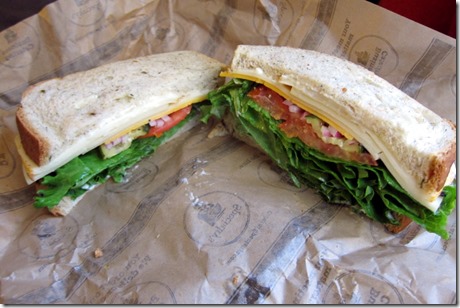 We also stopped at La Boulange for macarons. The chocolate hazelnut macaron was fabulous and reminded me of a melt-in-your-mouth Ferro Rocher candy. 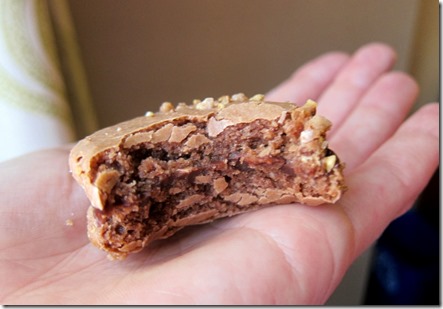 Thank you so much to Smartfood for such a fun day in San Francisco!

Disclaimer: As I previously stated, my trip to San Francisco was sponsored by Smartfood. It was a wonderful trip and now I’m dying to go back and explore the city in depth in the future!