A treat was waiting for me at the hotel’s breakfast buffet this morning.

Right when I spotted the bread, I threw two slices in the toaster before topping them with peanut butter and jelly. 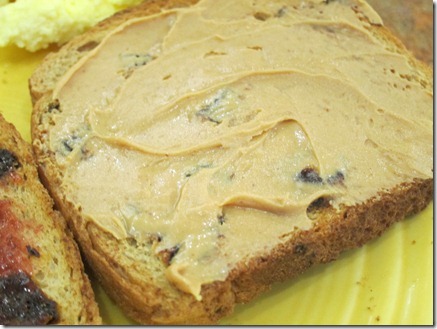 Along with the toast, breakfast included some scrambled eggs and a banana. 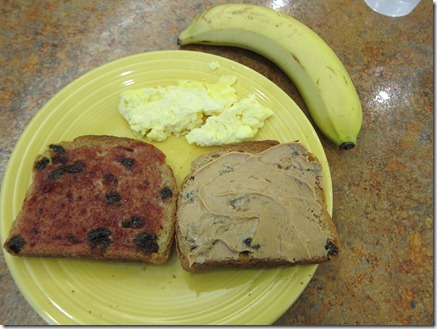 I also poured myself a hot mug of my new favorite pomegranate green tea, which I am currently enjoying as I blog. Mmm.

Moving right along… It’s time for a PBF Book Review!

That’s how long it took me to read Sarah’s Key, a moving and emotion-filled historical fiction novel.

I couldn’t put it down and spent the majority of my evening the past two nights thoroughly entranced in the book. 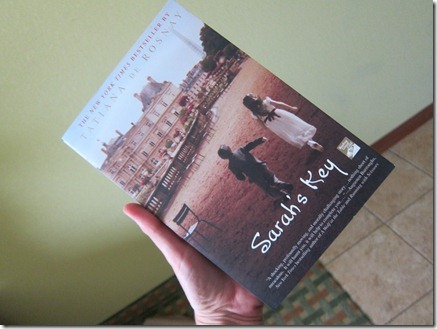 Sarah is an 11-year-old Jewish girl living in Paris in July 1942. The book follows her life, beginning on the night that her family is taken by French police to a large stadium, the Vélodrome d’Hiver, with thousands of other Jewish families who were then transported to concentration camps.

When the French police come for Sarah’s family, she tells her four-year-old brother to hide deep in the secret cabinet in his room. She locks him in the hidden cabinet, assuming her father will let him out or that her family will return to let him out soon. The book chronicles Sarah’s journey and her obsession with getting back to her brother.

In 2002, the book follows journalist Julia Jarmond, who, though researching more about the Vélodrome d’Hiver for a story, becomes engrossed in the events that occurred in Paris in the summer of 1942. Her life intertwines with Sarah’s and the book jumps back and forth between the two characters before solely following Julia as she connects the pieces between their two lives in the second half of the novel.

While the characters are fictional, the events that happened in July 1942 in Paris at the Vélodrome d’Hiver are very, very real.

Knowing that thousands of Jewish families were killed and others emotionally scarred forever because of the events that occurred only 69 years ago is what makes this book so hard to read, so gut-wrenching and so moving.

I have been deeply interested in the Holocaust since I read Number the Stars in fourth grade and struggle to wrap my head around the evil and cruelty that occurred in this world not that long ago. Sarah’s Key discusses the round up at the Vélodrome d’Hiver, an event where French policemen rounded up Jewish families, not German soldiers. I had never heard of the events surrounding the Vélodrome d’Hiver until this book and the author clearly communicates that the Vélodrome d’Hiver round up is an event that shames France and is commonly forgotten by not only the French but by people worldwide.

It is clear that the author feels that this event is one that should be remembered and I couldn’t agree more. The families affected by the Vélodrome d’Hiver round ups deserve our thoughts and our prayers and I am so grateful to have read Sarah’s Key, not only for the tremendous writing and storytelling, but for the education about such a tremendous and horrific event in history.