Navigation
I’m back in Florida after a whirlwind weekend in Colorado visiting two of my best girlfriends, Michaela and Leah. 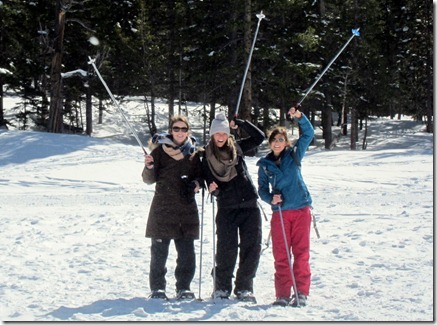 We had the most amazing time snowshoeing, exploring Denver and Boulder, eating Thai food, catching up and just being together after nearly eight months apart.

I’ve known Michaela and Leah since elementary school (Pleasant Hill for my wonderful northwest suburbs of Chicago readers), and we’ve stayed close through college and multiple moves. Michaela moved to Denver last year and I was really anxious to see her in her new hometown.

I arrived in Denver on Friday night right around dinnertime. Since Leah was getting in late, Michaela, her boyfriend, Kyle, and I all hung out at their apartment until her flight arrived.

Michaela made such a delicious pizza for us to share and I cannot wait to recreate it at home. 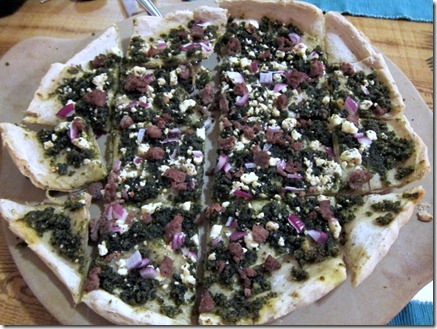 Michaela is gluten-free for health reasons, and made the pizza on a rice-based  gluten-free crust that I absolutely loved. It was chewy and flavorful and when topped with homemade pesto, feta cheese, turkey sausage and red onion, tasted fantastic! It reminded me of something Urban Flats, a tasty flatbread restaurant in Orlando, would serve.

Leah’s flight from Chicago was unfortunately delayed, but she arrived safe and sound and we picked her up at the airport after 11 p.m. and spent the remainder of the night at Michaela’s apartment talking until the early morning hours.

The next day, we awoke bright and early for quite an adventure.

We drove about and hour and a half away to a popular state park to snowshoe! 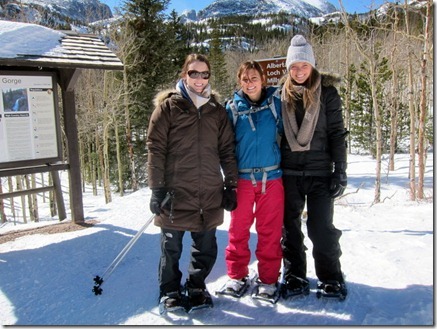 Thanks to Michaela for outfitting me in snow pants and a puffy coat! I definitely don’t have the proper cold-weather clothing anymore.

We rented snowshoes and poles for $15 and headed out to tackle several miles of hiking. 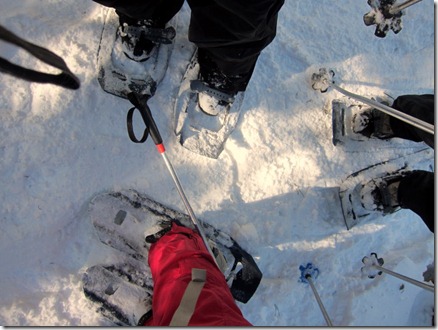 Call me crazy, but I totally pictured walking on tennis racquets when Michaela said we’d be snowshoeing. Fortunately snowshoes have come a long way and were really easy to walk in and did a great job of keeping me atop the thick snow. 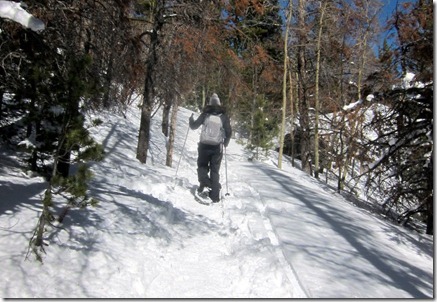 Leah and I had a bit of a hard time adjusting to the altitude in the beginning. I swear my heart was pounding so, so fast just walking at a normal pace. 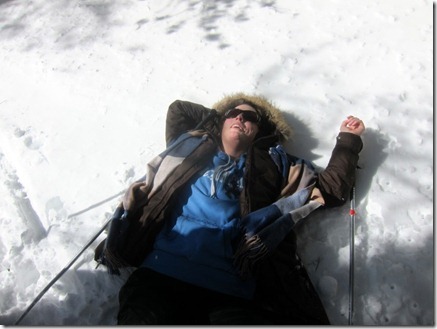 It’s absolutely crazy to me what a difference the altitude makes. I always heard that high altitudes can really take your breath away, and I know I’m affected easily by pressure changes (it takes me longer than most to descend when scuba diving because I need to equalize so often), but this was really shocking.

We took it slow and enjoyed the unbelievable views and scenery. 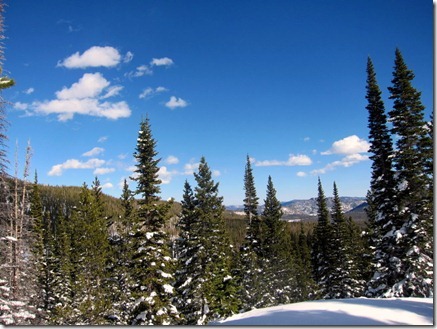 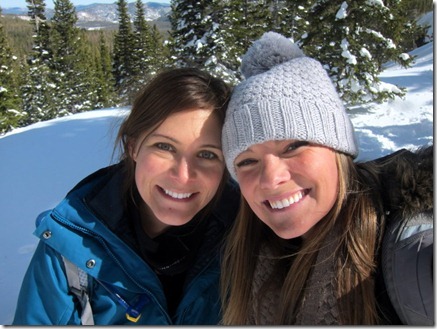 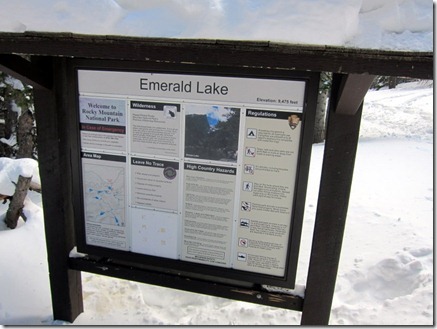 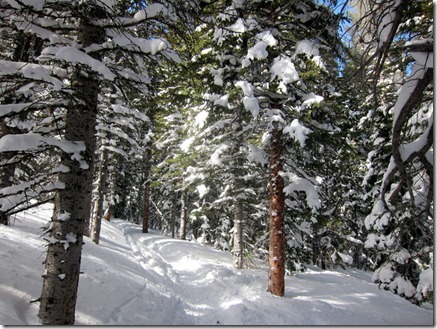 Is that not postcard material, or what? Both Leah and I said walking through the snow-covered trees reminded us of the children’s book The Mitten. So picturesque!

The goal of our hike was to make it to two different lakes that were completely frozen over. 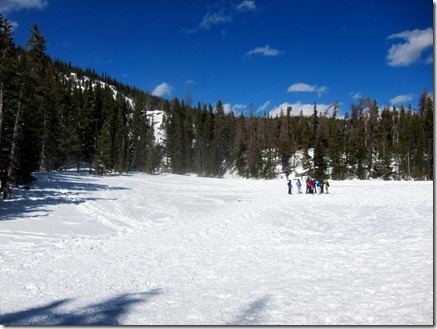 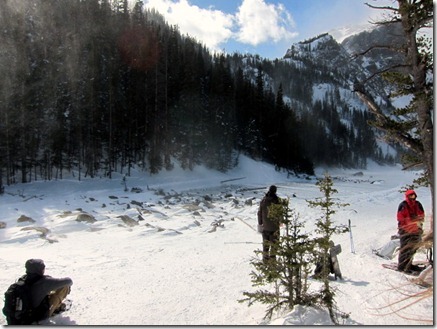 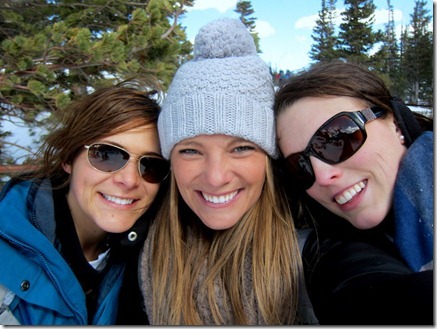 Once we reached the lakes and turned around, the hike was considerably easier since it was all downhill. We also packed a bottle of wine and snacks and stopped for a break to make a toast and eat a bit before heading back. 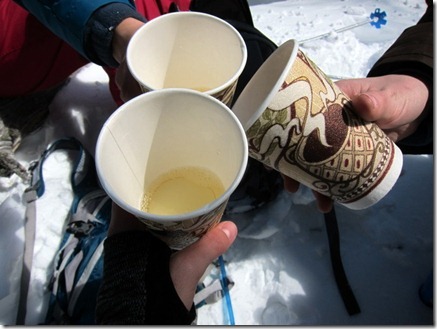 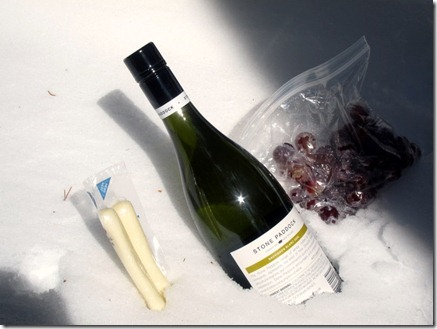 I also ate a ton of nuts (I was craving salty food like mad!) and an apple. 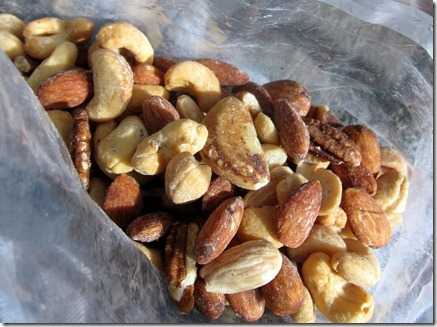 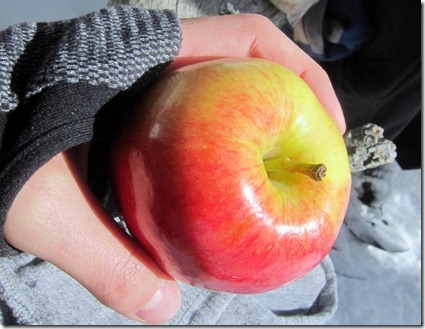 After eating my apple, I made a big mistake. I threw my core to a nearby hungry-looking squirrel. Apparently you’re not supposed to feed wild animals in state parks, and boy did I learn my lesson. 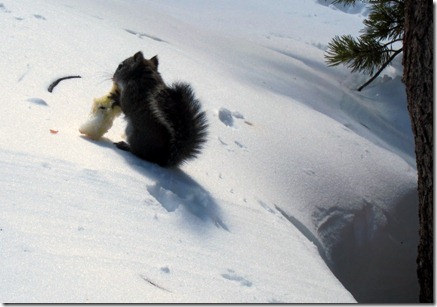 That squirrel was INSANE. Longtime readers may know that I already have major issues with squirrels after quite the incident at UCF and this squirrel only further solidified my fears.

The squirrel had NO fear. It would not leave us alone and ran right up to us, grazing our boots and running IN BETWEEN our legs. It did not relent when we screamed like crazy and tried to scare it away and jumped toward us from tree branches. It was literally fearless and we were flipping out and scrambling to gather our food and wine and get the heck out of there.

I’m pretty sure we would win the $100,000 grand prize on American’s Funniest Home Videos had we caught that little escapade on video.

We hiked the remainder of the way back to the car and laughed about the psychotic squirrel and were on a hiker’s high. Downhill was so much easier and we probably hiked back in half the time it took us to hike to the lakes. 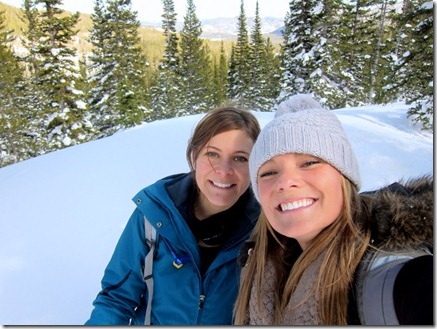 Such an amazing day!

I’ll be back soon with a recap of the rest of our time in Colorado. I miss Michaela, Leah and that beautiful state already!