Navigation
Our second day in Cusco began bright and early. After a quick hotel breakfast, we joined a small group of three other couples (two from Australia!) for an all-day tour of The Sacred Valley between Pisac and Ollantytambo.

Our tour guide for the day, Tomas, took us to some incredibly picturesque places in between our scheduled stops for the day. Beginning a long tour with a few stops for pictures of the incredible views of the Andes mountains isn’t a bad way to go! 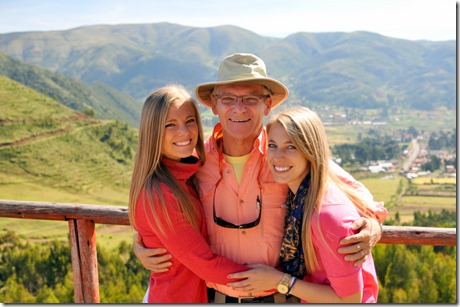 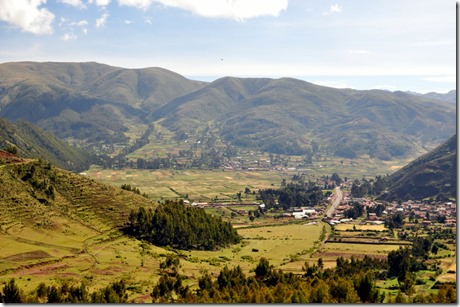 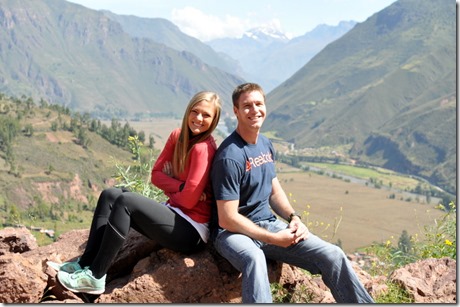 During our time in Peru, we have been incredibly lucky with the weather. No rain, lots of sun, no humidity and minimal clouds. 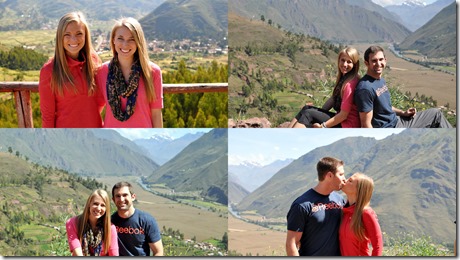 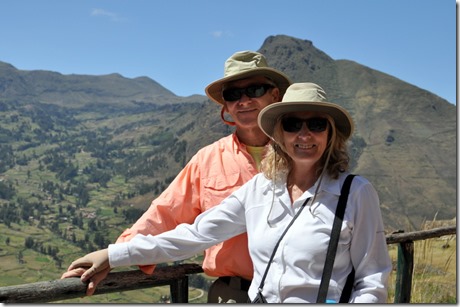 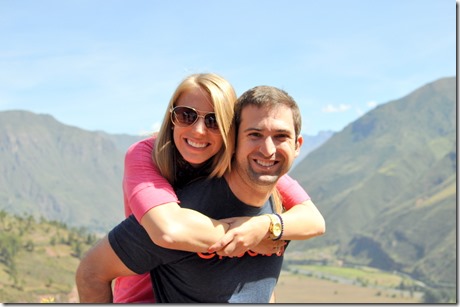 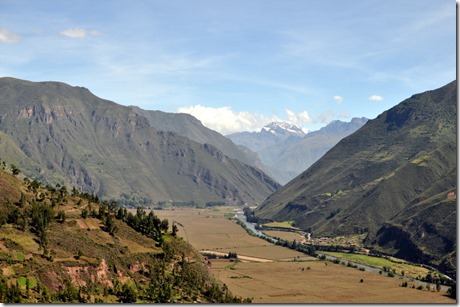 Our first official stop of the day took us to a little market where we were able to browse around, use the bathroom, take pictures of the donkeys and play with the llamas and alpacas. 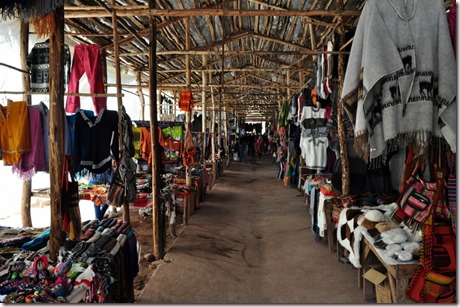 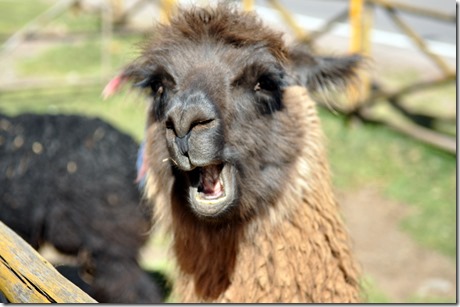 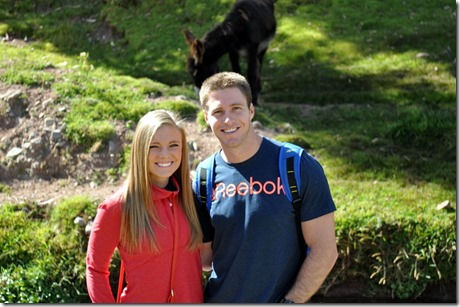 After my last travel post, I gathered that a few of you are big-time alpaca fans, so I am a little too excited to share the picture below with you. 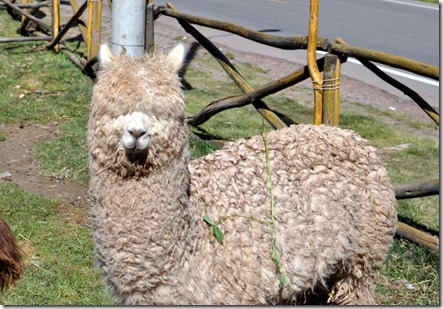 Best alpaca ever! For some reason that alpaca absolutely cracked all of us up. Since the alpaca’s eyes were completely covered in fur, it couldn’t see, so when you’d talk to it, the alpaca would just turn its head searching for the voice. It was adorable and hilarious and it is now my desktop background.

Next, Tomas took us to see Inca ruins that were quite impressive. 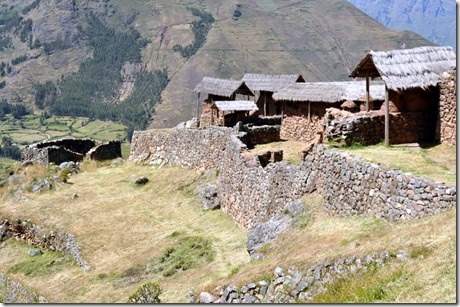 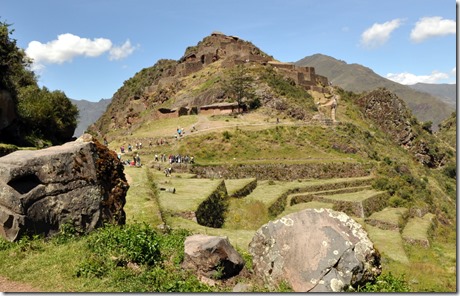 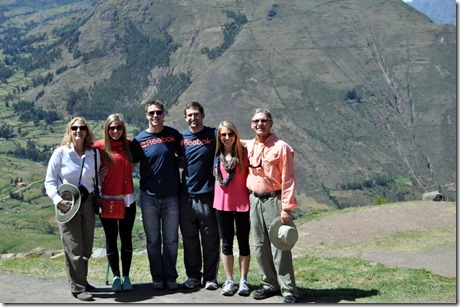 (Yes, Ryan and Ross are wearing the same shirt. They both packed the same shirt and when they realized this, they planned to wear it on the same days for the rest of the trip. They were quite a sight!)

At one point, Tomas asked our group to look around the area and locate the Inca graveyard. We all pointed to varying places, but no one guessed that the Inca burial site was in the mountain. In the picture below, you can see small holes where the Incas buried the dead. 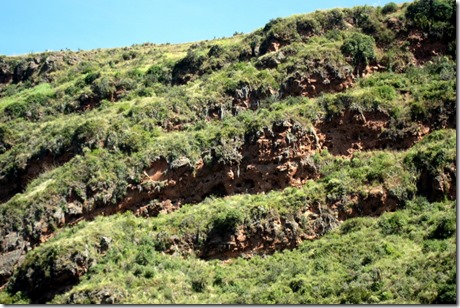 They were buried in the fetal position, surrounded by treasures. The holes are there now because grave robbers learned that the bodies were buried with valuable possessions and robbed the graves, leaving only the holes remaining.

After spending some time at the ruins, we boarded the bus again and drove to my favorite stop of the day, Pisac Market, a local market that featured produce, meat, fish, jewelry, clothing and crafts. Though the crafty areas felt a bit touristy, the produce, meat and fish market seemed to attract many locals and I loved meandering around and looking at all of the amazing food. 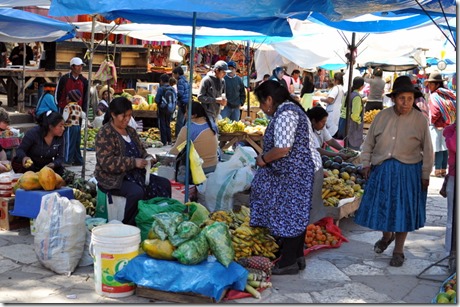 The fruits and vegetables looked so succulent and fresh and I was dying to make a big bowl of the most fantastic fruit salad. 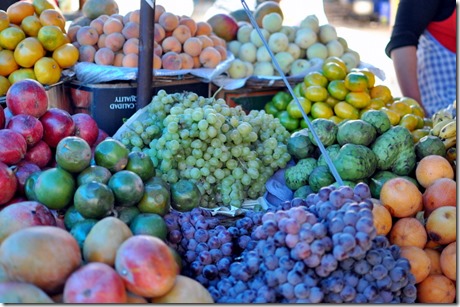 We walked around the market as Tomas pointed out fruits and vegetables that I’ve never seen in the United States before. 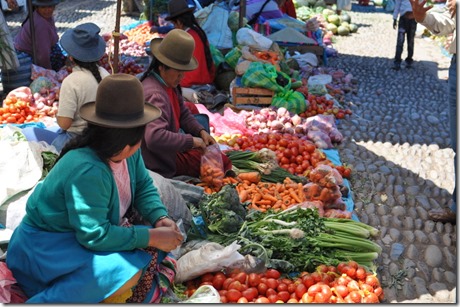 One vegetable that amused our group was a certain kind of potato that the Incas used to eat before they went off to battle. 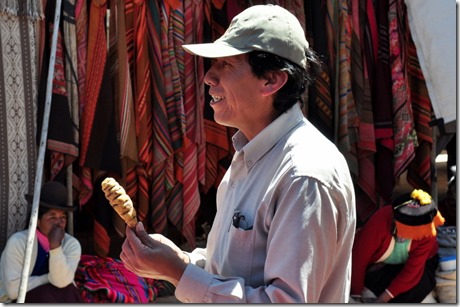 Apparently it has the opposite effect of an aphrodisiac and made it easier for the Inca men to concentrate on fighting rather than foxy ladies.

The market also included lots of jewelry, clothing and crafts. I bought three little bracelets for $5. 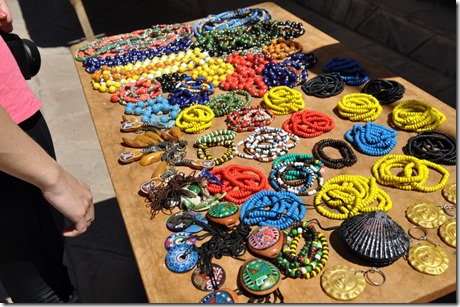 Following our time at the market, we drove into Urubamba for lunch before we were off to Ollantaytambo Temple to climb some stairs! 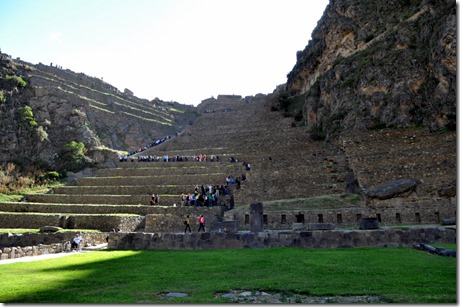 Thankfully we had a 30-minute drive to digest before we arrived and started climbing. 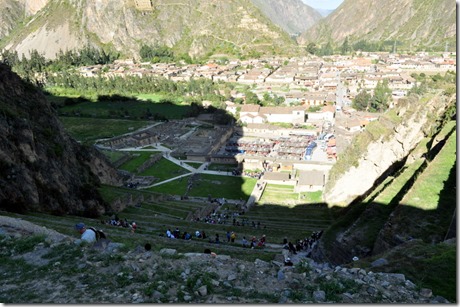 The 200 stairs took us up to the top of the unfinished Temple of the Sun. (It was unfinished because the Spaniards arrived when the Incas were in the middle of constructing the temple.) 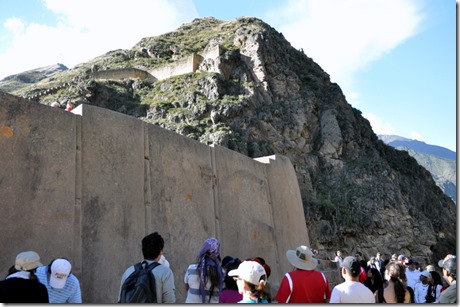 The Temple of the Sun is considered a masterpiece of Inca stonework and the views from the top were breathtaking. 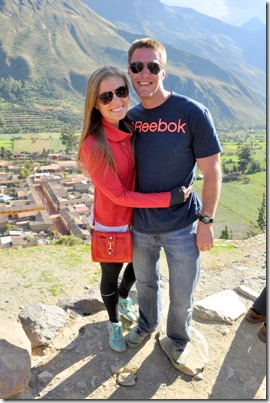 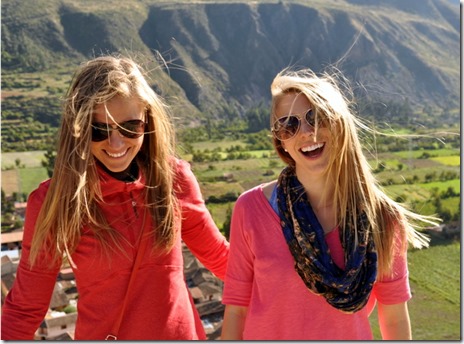 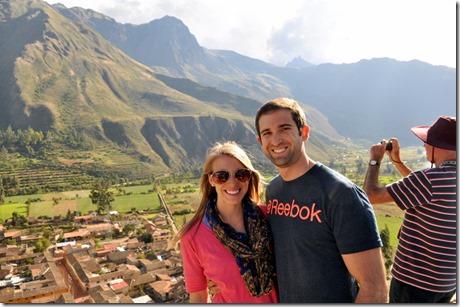 In the picture above, if you look above Ross’s head and slightly to the left, you can see the Cachicata quarry where the Incas found the rocks they used to construct the temple. They dragged boulders weighing up to 52 tons down the mountain, across the Rio Urubamba (the river that eventually becomes the Amazon) and up a steep ramp. Talk about impressive!

We spent a little less than an hour at the Ollantaytambo Temple before it was time to say goodbye to Tomas and our tour group. We had a train to catch! 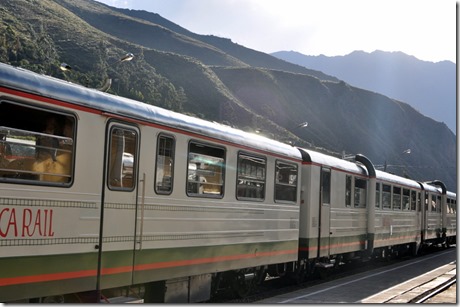 The 90-minute train ride took us to Aguas Calientes where we ate an amazing dinner before falling into bed for a good night’s sleep.

At dinner we all made sure to try pisco sour, a liquor we heard a lot about from locals. 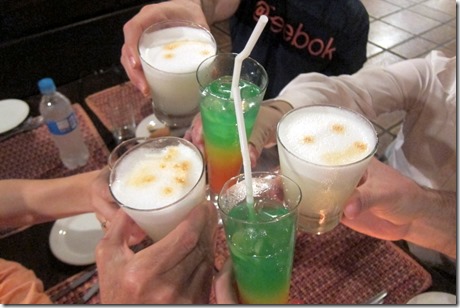 The drinks with three colors (my drink and my mom’s drink) featured a layering of flavors and included pisco sour. Those drinks were intense!

After dinner, we all headed to bed because we knew we needed rest since we had plans to head to Machu Picchu before 6 a.m. the following day.