Navigation
What a week! It was a good one for the Fagan family — Ryan and I celebrated our 9 year wedding anniversary on Wednesday and enjoyed Halloween fun with the boys on Thursday — and it looks like the fun will continue into the weekend. (Side note: Speaking of our anniversary, an Instagram follower reminded me of our awkward wedding kiss memory and I laughed out loud. Still one of my favorite memories from the day!)

Right when Ryan gets off work today, we’ll be heading off on a quick two-night getaway with the boys and Sadie. We are hoping to see lots of colorful leaves and spend most of the weekend outside. As always, I’m planning to recap everything on the blog next week but until then, let’s dive into my weekly roundup of Friday favorites, shall we? 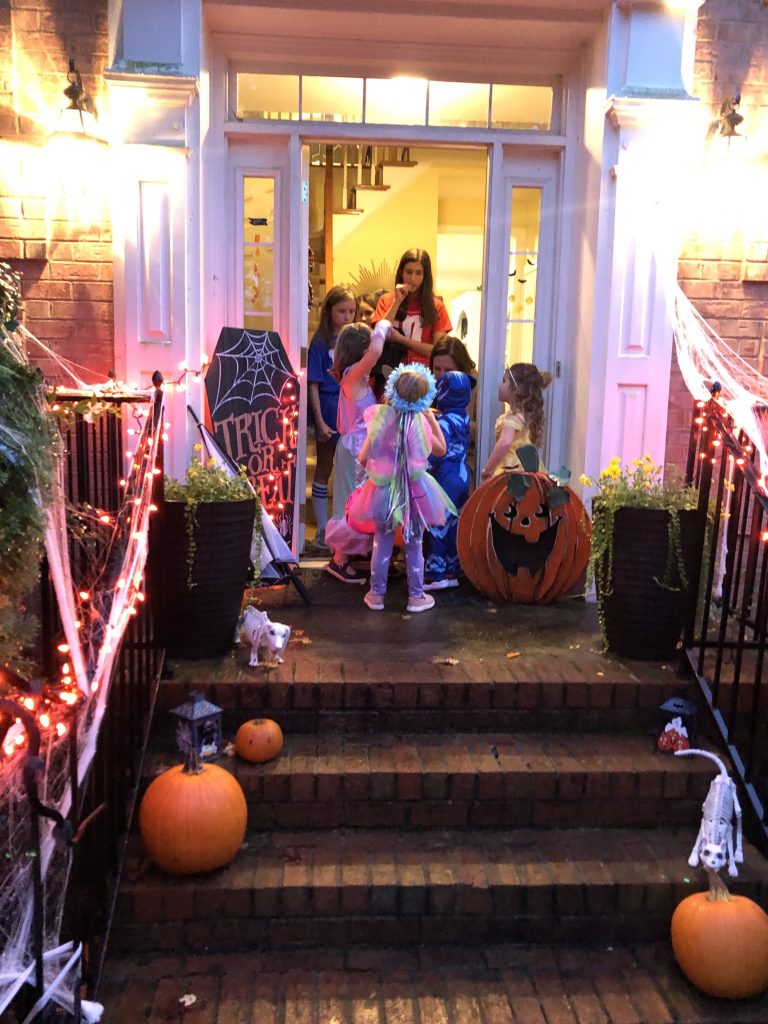 Halloween gave us a run for our money this year! The forecast called for thunderstorms all evening and throughout the day, we received updates from various neighborhoods postponing the festivities to today. We didn’t know what to do because the weather didn’t seem that terrible but right at 5 p.m. pouring ran hit! We decided to follow through with our plans and headed off to our friends’ Carrie and Nick’s house for a Halloween pizza party with our fingers crossed that trick-or-treating might be a possibility. Right around 6:15 p.m., the rain dissipated and the kids flipped out when they realized trick-or-treating was back on the table! 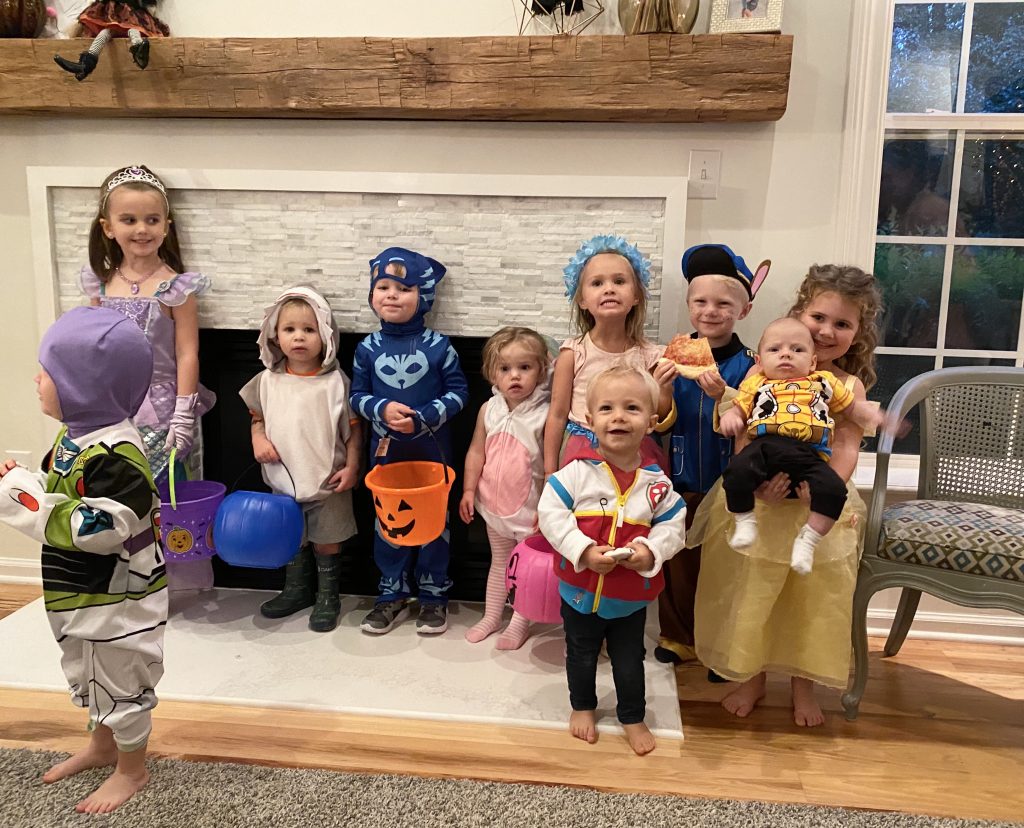 Our crew dressed up as Paw Patrol characters because our boys share the names of two of the prominent characters from the show. 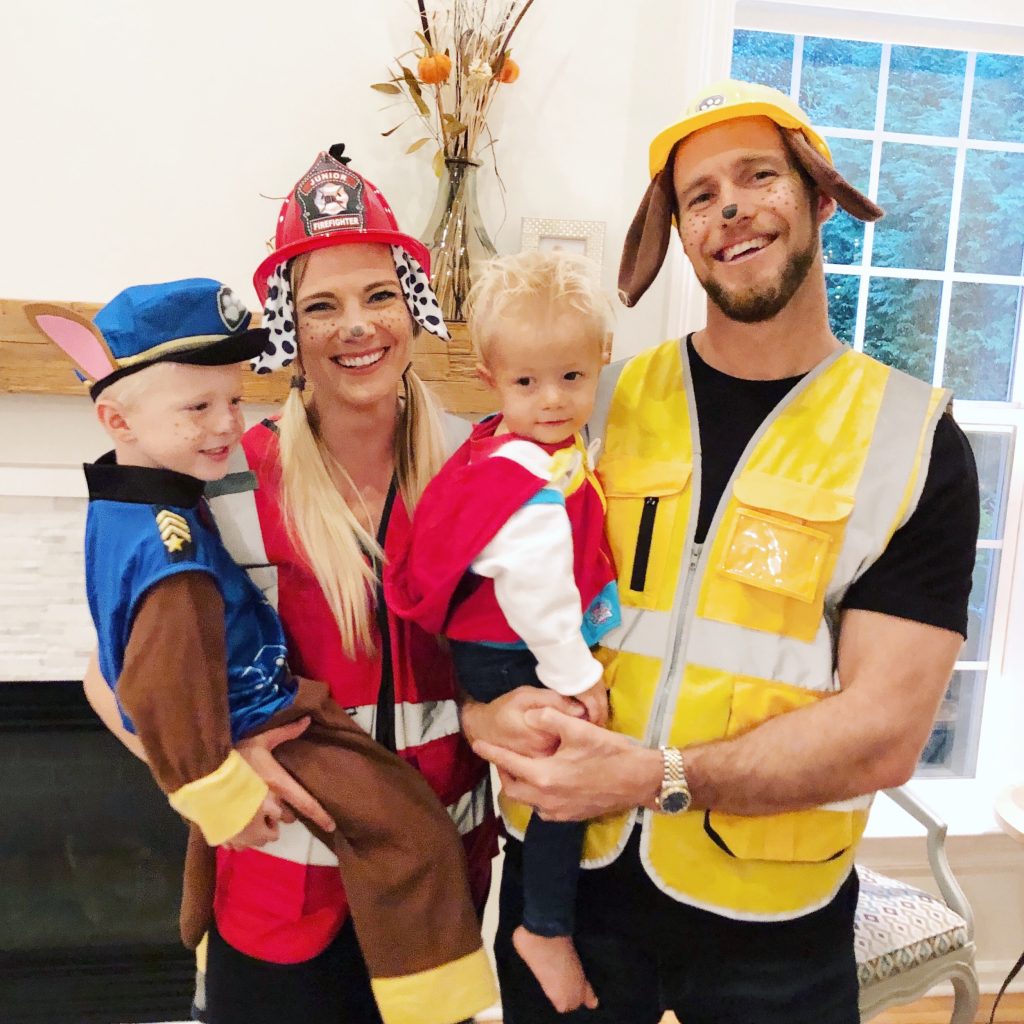 Chase was Chase, I was Marshall, Ryder was Ryder and Ryan was Rubble! (For those unfamiliar with the show, we were the four characters beginning with the dalmatian on the top row of the photo below) 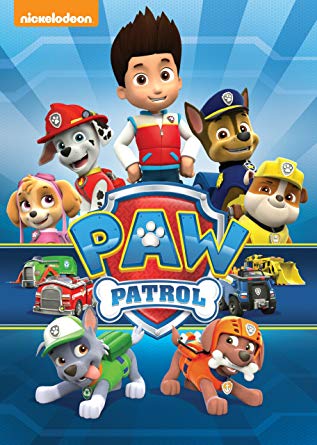 Fun fact: The fact that Chase and Ryder are both names of characters from Paw Patrol is one of the reasons Ryder didn’t have a name for 48 hours after he was born! (It’s actually the name I alluded to in this pregnancy post.) I initially refused to have kids with Paw Patrol character names but, in the end, we went with the name Ryder because we loved it so much. And he’s totally a Ryder!

Anyway, our Halloween ended up being a good one. We got a little wet when the rain returned but thunder and lightning held off so I’ll consider it a success! 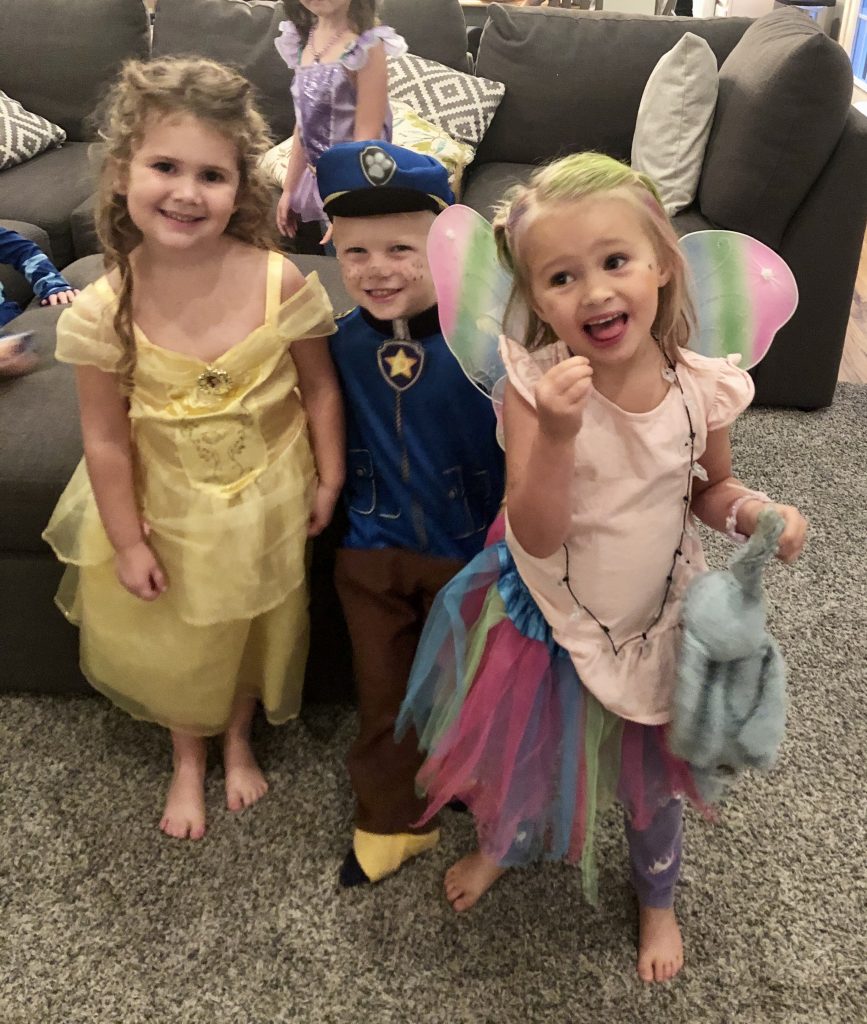 The kids clearly had a blast (we practically had to sprint to keep up with the big kids this year!) and watching Ryder attempt to trick-or-treat for the first time was adorable. Half the time he put candy from his pumpkin bucket back into the dish of the house the kids were visiting and the other times he just wanted to pet the homeowners’ dogs. 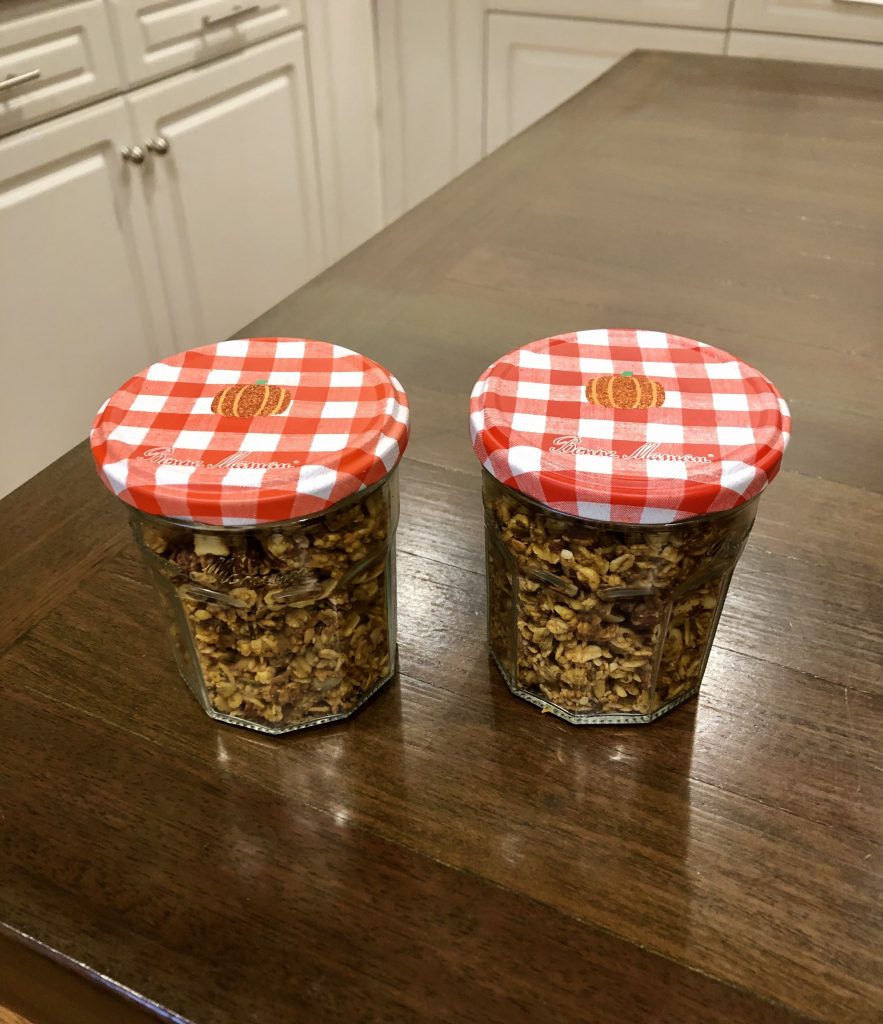 There are so many pumpkin granola recipes on the internet but a surprising few call for real pumpkin in the ingredient list. Leave it to the masterminds behind Pinch of Yum to create a pumpkin granola recipe with simple, clean ingredients that includes real pumpkin, maple syrup, olive oil and a perfect combination of sweet and salty spices. Chase and I teamed up to make a batch of the granola earlier this week (the recipe, as written, makes a LOT of granola) and poured some into small glass jars for his teachers who said they also loved it! If you’re not pumpkin-ed out yet, keep this recipe on your radar! 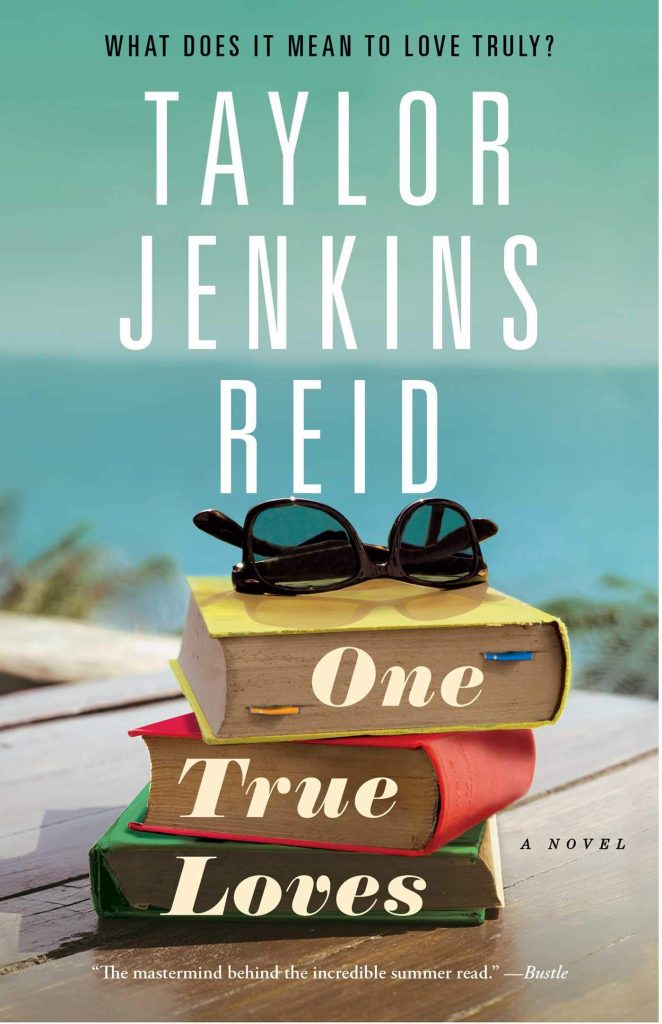 You’re not surprised to see another Taylor Jenkins Reid novel pop up in today’s post, are you? Once I find a talented author whose novels I enjoy, I often go on a bit of a reading spree with their work (I’m looking at you, Beatriz Williams and Sarah Jio) and Taylor Jenkins Reid is my latest obsession. Though it’s hard to top Daisy Jones & The Six and The Seven Husbands of Evelyn Hugo, I am enjoying her earlier work as well. In her books that touch on relationships and romance, she has a way of creating characters who seem so real and writes in a way that I find myself highlighting her words as I read because they feel so poignant.

The premise of One True Loves instantly captivated me. Emma Blair married her high school sweet heart, Jesse, and built a life with him that she loved and adored. They were passionately in love and living a life of travel and adventure when Jesse suddenly goes missing following a helicopter crash over the Pacific Ocean. Emma is left heartbroken and unsure how to move forward. She moves out of their California home and back to her small childhood hometown in Massachusetts where she helps run her parents’ bookstore. It is there that, years later, Emma crosses paths with Sam, a friend she knew from her high school days when they worked together at the bookstore. Emma finds herself falling for Sam and is soon engaged with a man she loves deeply. And then Jesse returns. He somehow managed to survive stranded for years on a small piece of land and dreamed of the day he’d be reunited with Emma. Now faced with an impossible decision — choosing her husband or her fiance — Emma struggles to figure out whether it’s possible to have more than one true love.

Snickerdoodle Smoothie (I added a hefty scoop of pumpkin to this recipe earlier this week and it was SO GOOD!) 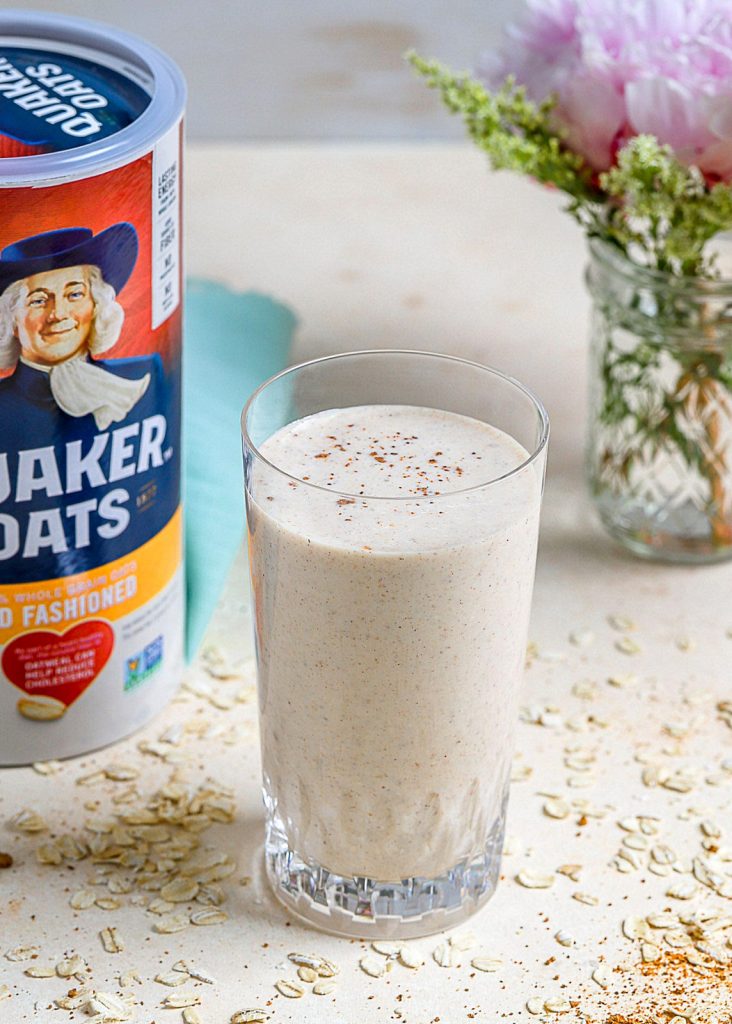 10 Blogger Recipes I Make Again and Again (I still love all of these recipe and have been meaning to do an updated version of this post!) 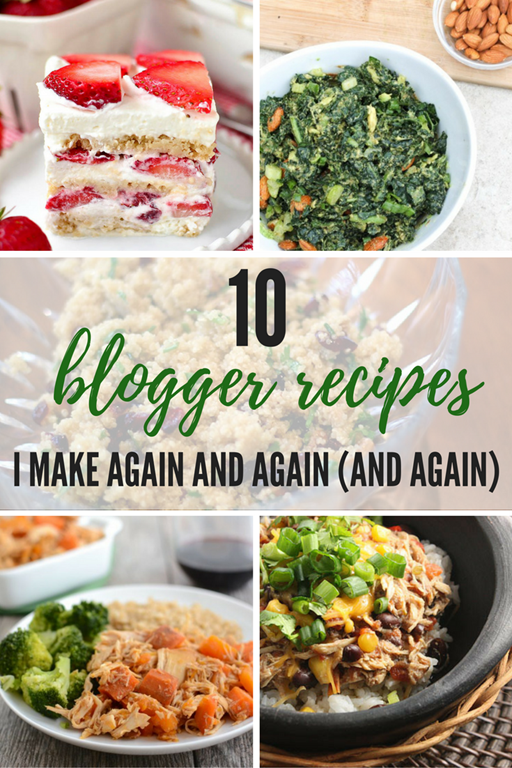 Have you made any must-try pumpkin-based recipes this fall?

What is one thing you’re loving this week?