Navigation
Is this week an insane one for everyone or what!? The days leading up to Christmas always feel a little chaotic but for whatever reason they feel extra crazy this year. (Is this what having kids does to the holiday season? They make it wonderful but totally nuts?) If I’m being honest, it admittedly takes me a bit of effort to remember to catch my breath and savor this time of year when it seems like life is running full-speed ahead. I could really use an extra buffer week before Christmas arrives next Tuesday but since that’s not happening, I’m doing my best to roll with it and get as much done as possible while still taking time for the fun family stuff.

Fortunately our weekend was filled with a lot of holiday family festivities and it all kicked off on Friday night when we had some of our closest friends and their little ones over for a Christmas pajama party. 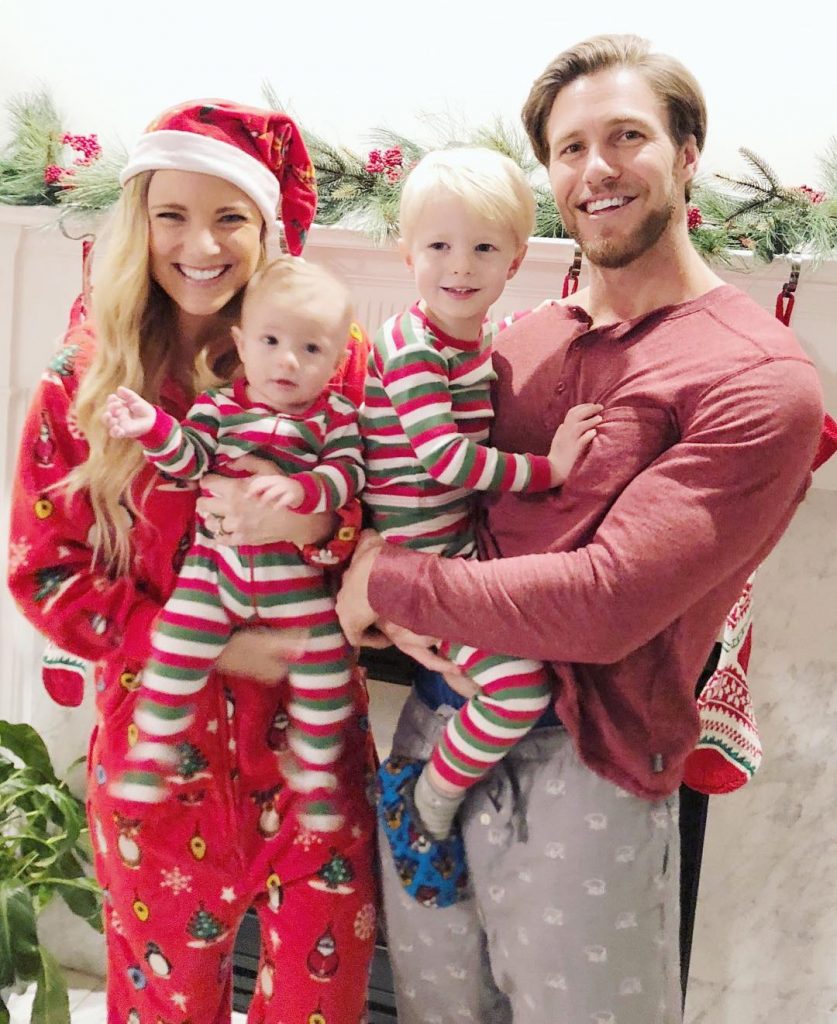 For the past couple of years we’ve stuck with an ugly sweater theme for our annual holiday party with our kids but last year we thought it would be adorable to dress our children up in matching Christmas pajamas this time around. It was so darn cute but one thing we didn’t anticipate was how much our little ones would love their matching jammies. 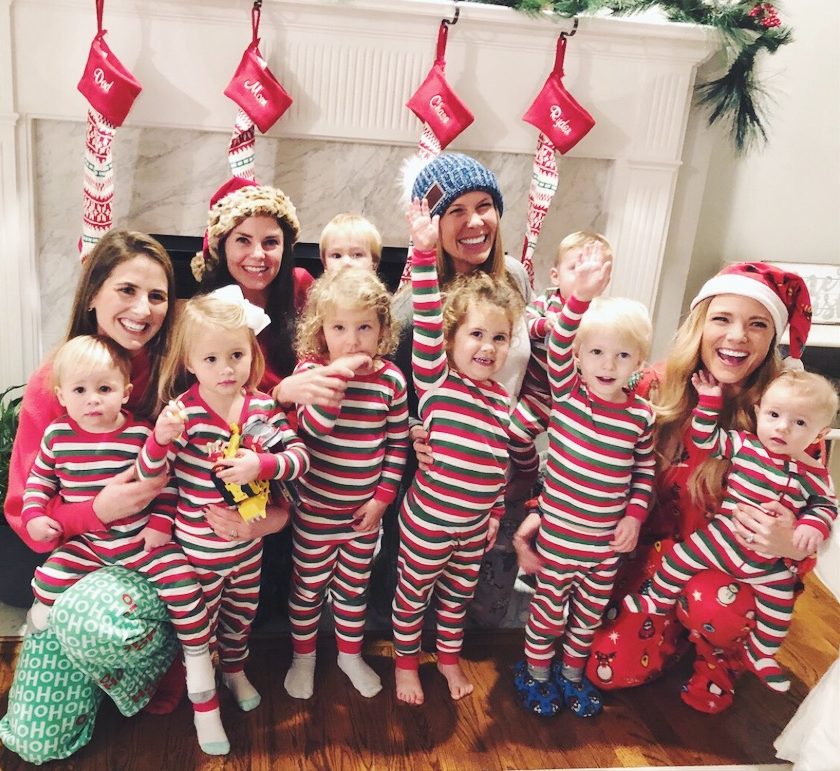 Chase got the biggest kick out of the fact that his friends and little brother were wearing the same pajamas he had on and now he keeps asking if his friends will be wearing identical outfits before we leave the house. Apparently matching is where it’s at when you’re three years old! 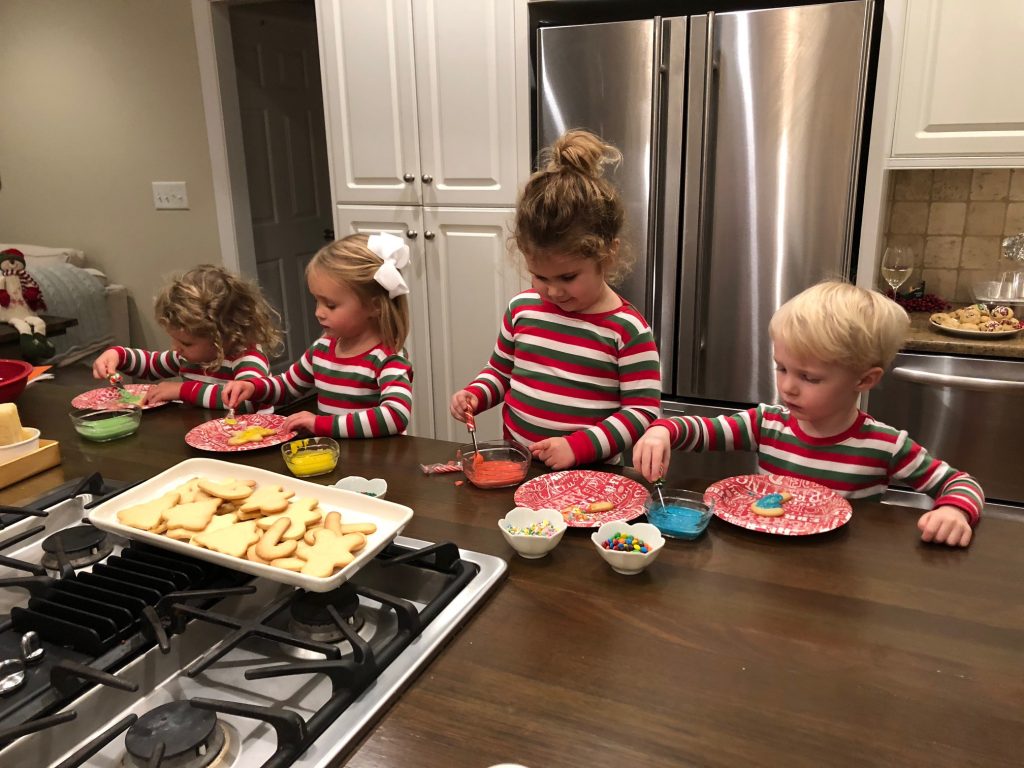 The holiday-related festivities continued on Saturday morning when we made our way up to Mooresville to Ryan’s boss’ house for her annual Santa party. Every December, Ryan’s boss organizes an annual Santa party where she hires a local Santa to come to her home for an hour to take pictures with kids. It was such a treat to have access to Santa and not have to wait in a crazy long line or brave our local mall for Chase and Ryder to have the opportunity to meet him.

We weren’t sure how Santa would go over with our boys but their encounter went surprisingly well! Chase was pretty shy around Santa but managed to say a few enthusiastic “Ho, ho, hos” on his lap. 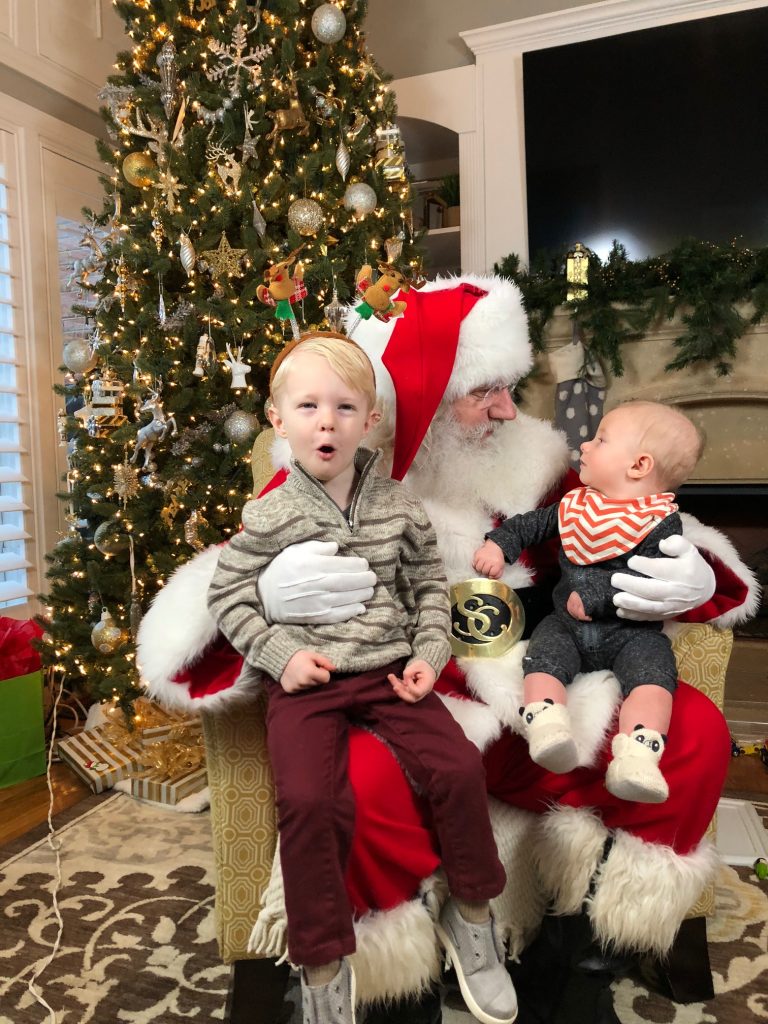 When Santa asked Chase what he wanted for Christmas, he got major stage fright and simply replied, “Yes.” I guess that means he wants something for Christmas, but Santa may never get to know what. (A firetruck is the only thing he’s asked for this Christmas so hopefully Santa will somehow get the memo, although rumor has it Aunt Leslie may have that one under control.)

When it came time for Ryder to meet Santa, we placed him on his lap and he stared at his face for the longest time. We thought for sure terrified tears were going to follow but the biggest little grin came out and he just sat there, happy as a clam on Santa’s lap. 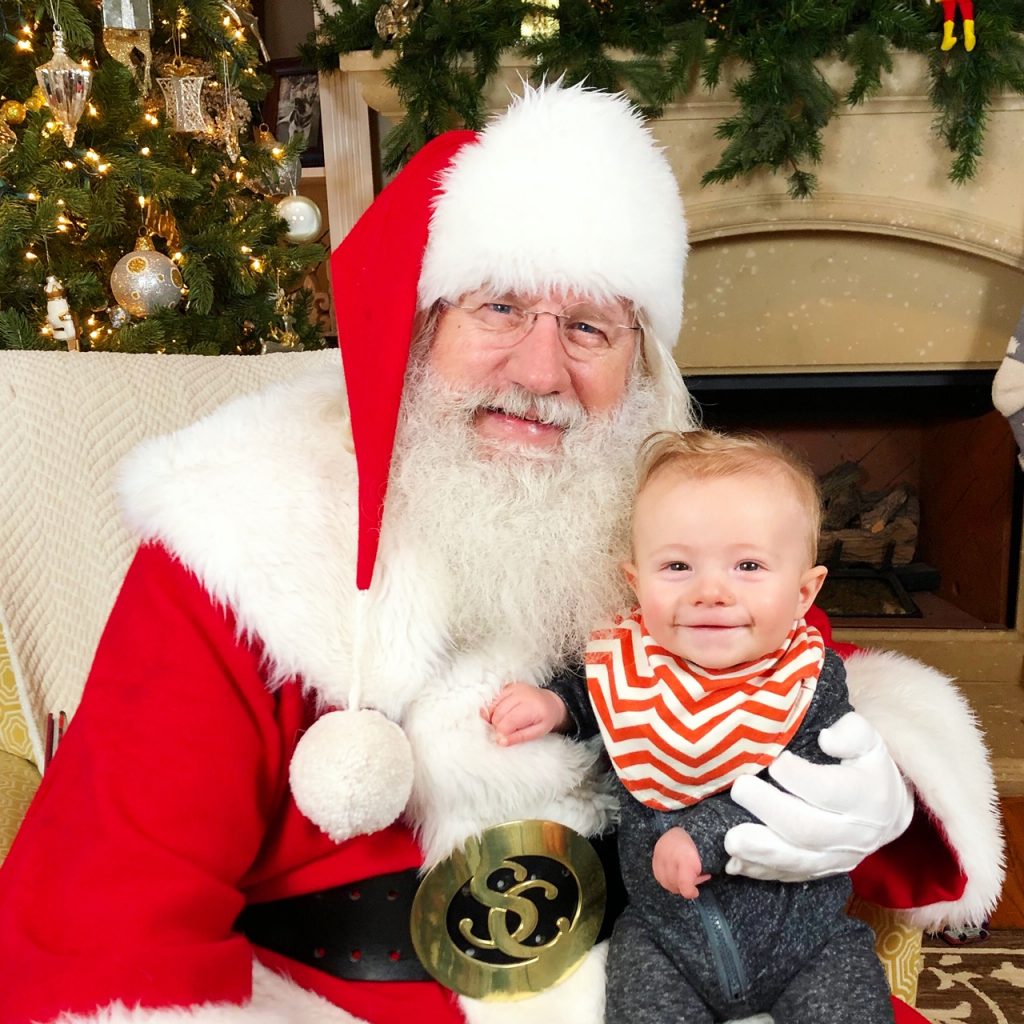 That kid, I’m tellin’ ya. He has yet to meet a person he doesn’t instantly love.

We spent the rest of our Saturday doing some more holiday stuff. I finally wrapped up ordering our holiday cards (why does it always take me for-ev-er to make up my mind on what photos I want to include!?) and then we headed off to a pottery painting studio to get a little crafty with the boys for some surprise Christmas gifts.

Sunday morning began with an early morning church service. It was the perfect way to begin the day and we rounded out the morning with a trip to the grocery store before heading home.

It was a no nap kind of Sunday in our house for Chase which actually worked out just fine because it was so gorgeous outside — 60s and sunny — and we were all itching to spend some time in the sunshine. We spent the majority of the afternoon outside and, after taking Sadie on a walk with the boys, we played at a local playground for a bit. Once we were back at home, we made Christmas cookies for Chase’s school party and ate dinner before curling up on the couch with some ice cream while we watched Elf before the boys’ bedtime.

The rest of my Sunday night was a great one and included some much-needed time with my small group friends. They came over to our house after all of our kids were in bed and we hung out for several hours and spent time catching up and exchanging holiday mugs as our own mini Christmas celebration. It was the perfect way to round out the weekend!

As for this week, yesterday was Chase’s preschool’s Christmas show and holiday party and today is his final day of school before he has a three week break. Three weeks — ah! We will actually be heading to Florida for Christmas on Thursday so I have a lot of laundry, packing and present-wrapping to tackle before we’re off. I hope you’re all having a great week so far!