Navigation
It’s fun getting the kids helping you in the kitchen and learning about food and how to cook. Here are some ways to involve kids in cooking and being kitchen helpers.

Right around the time Chase turned two, he began regularly “helping” me in the kitchen. I put the word “helping” in quotations for a reason because his level of actual assistance varies greatly and has admittedly increased significantly over the course of the past 1.5 years.

Chase got a kitchen helper cooking stand for his second birthday and it quickly became one of our most-used items around the house. (Chase still uses his cooking stand almost every day and we’ve since put felt pads on the bottom so he can run behind it and push it right up to the counter when he wants to help us in the kitchen.) I initially started including Chase dinner preparation and he now loves helping me make everything from slow cooker meals and casseroles to muffins and desserts. It didn’t take long for Chase to start asking to help with a variety of tasks and now he frequently wants to taste new foods and press pretty much every button on the oven imaginable during our cooking adventures. 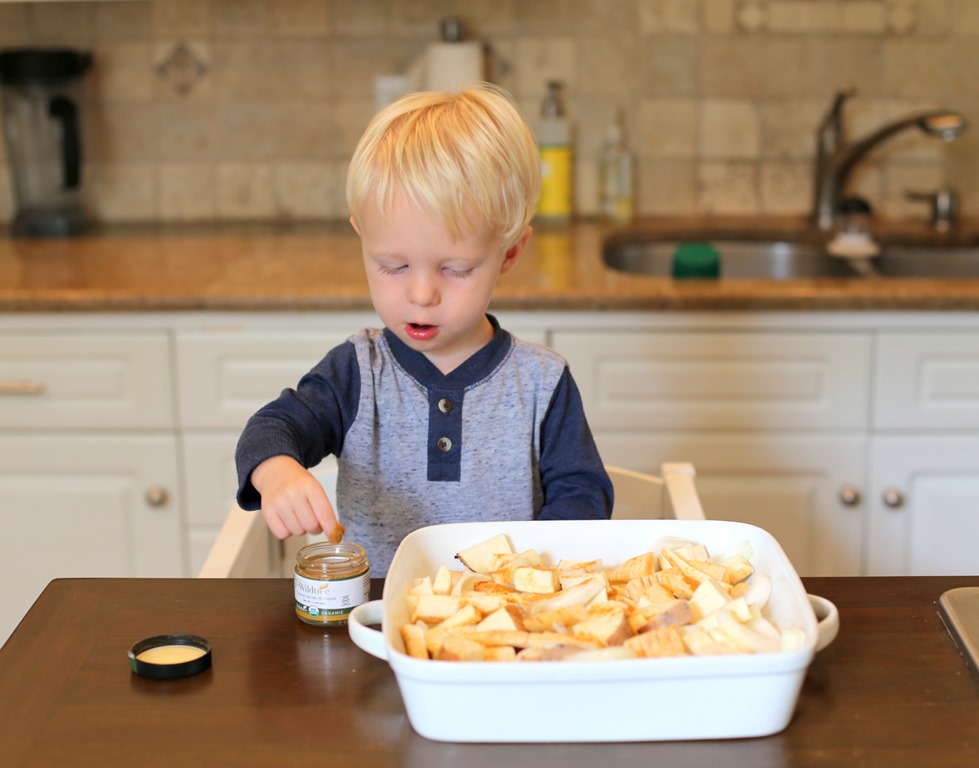 I’ve had a number of you guys reach out to ask me to share a blog post on the ways I incorporate Chase into the recipe preparation process and this post has been on my “must write” list forever! I finally got around to assembling a long list of the various ways I include Chase in kitchen fun and you may find it all detailed below.

Please note: I do not do every single thing listed below every single time Chase helps me in the kitchen but wanted to include a thorough list of the various ways I like to incorporate him into the fun of cooking and baking. Chase honestly really enjoys “helping” me these days and I love the fact that he’s learning about cooking while trying new foods and having fun. And the fact that we also manage to knock out a recipe and do something productive in the kitchen together feels like a win… even if every recipe takes 10 times longer and our kitchen is 10 times messier in the end.

Ways to Involve Kids in Cooking 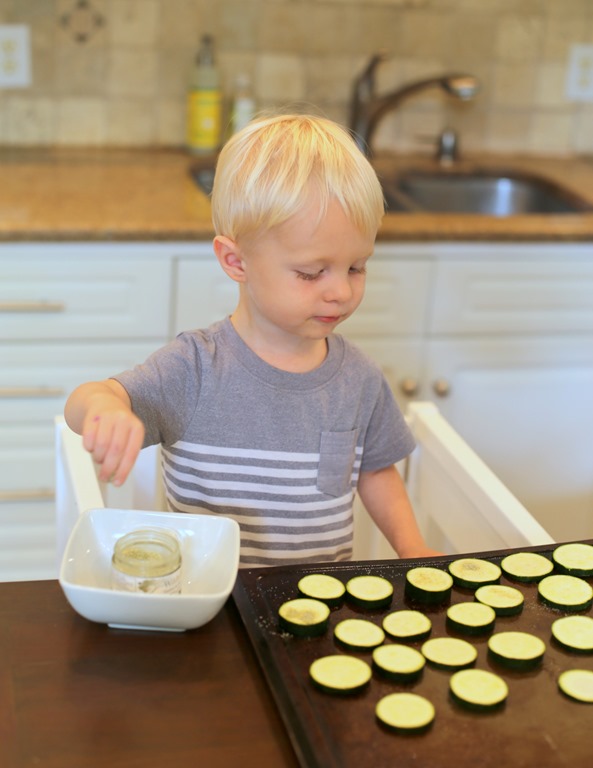 I let Chase help add spices to recipes in a number of ways. If the recipe calls for a “pinch” of something, I let him be the pincher. If I need a more exact amount of a certain spice, he loves measuring tablespoons and teaspoons and tapping them on the side of a bowl or pan to add the spice to a recipe. Also, when Chase started learning his numbers, I’d ask him to do something like “three taps” of the teaspoon on the side of the bowl which he thought was fun because of the loud tap noise but it also encouraged counting which I loved!

Also, this is a bit of a random “Mom Hack” but I also frequently slice up some cucumbers or bring out some baby carrots or hard-boiled eggs for Chase to snack on while we cook because he loves sprinkling them with a “teeny tiny pinch of salt.” (Sprinkling apple or pear slices with cinnamon is another favorite.) It’s a great way to get a healthy snack in his belly while we’re cooking or baking together and allows him to “play” with spices a little more. To help keep his sticky hands from contaminating spices/salt, I’ll add a bit to a small bowl for him that he can use as his own little stash.

Chase loves helping me stir and mix but when it comes to mixing things up with a hand-mixer or stirring ingredients together, I am all about using oversize bowls to prevent messes. Please don’t take this to mean our kitchen is even remotely spotless when Chase helps me in the kitchen, but to prevent overflow and a bigger mess than necessary, a larger-than-needed bowl is key for containing ingredients when a little one is serving as sous-chef. 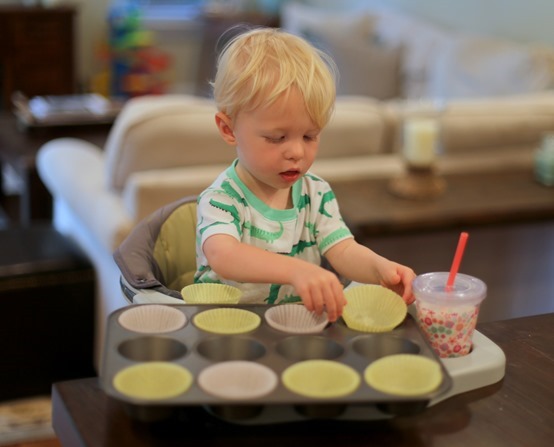 Filling muffin tins with muffin liners is a task that’s great for fine motor skills since kids have to work hard to separate the muffin liners from each other. I almost always have to help Chase with this one since the liners tend to stick together without him realizing it, but he absolutely loves this task, especially when I let him pick what muffin tin liners he wants to use from a variety of colors and designs.

I’m sure this comes as no surprise to anyone with kids around, but it seems like all children everywhere are obsessed with pressing buttons. As it turns out, cooking and baking involves a decent amount of button pressing from setting the oven or starting a blender to microwaving something or setting up the slow cooker. Chase loves being the designated “button presser” and especially enjoys pressing the oven light on and off to periodically check on whatever we made together as it bakes away. 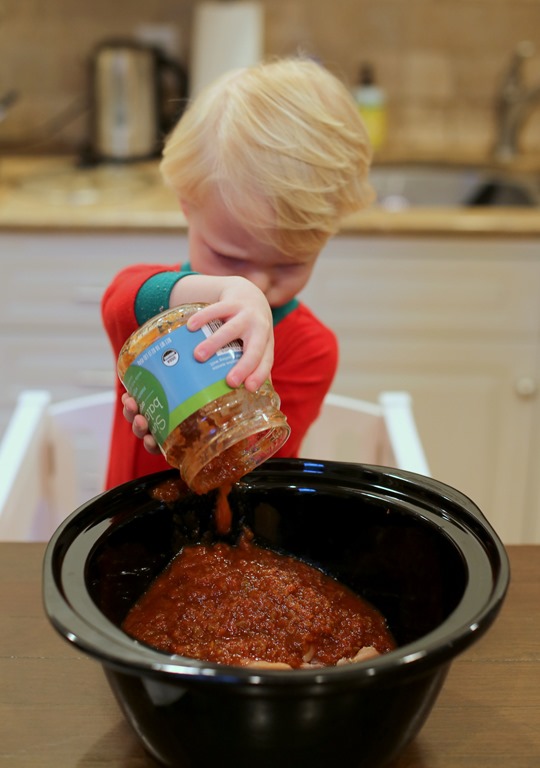 This one goes without saying but measuring (aka “digging” into a big bag of flour) and pouring anything and everything is probably Chase’s favorite task. The bigger the measuring cup, the better! 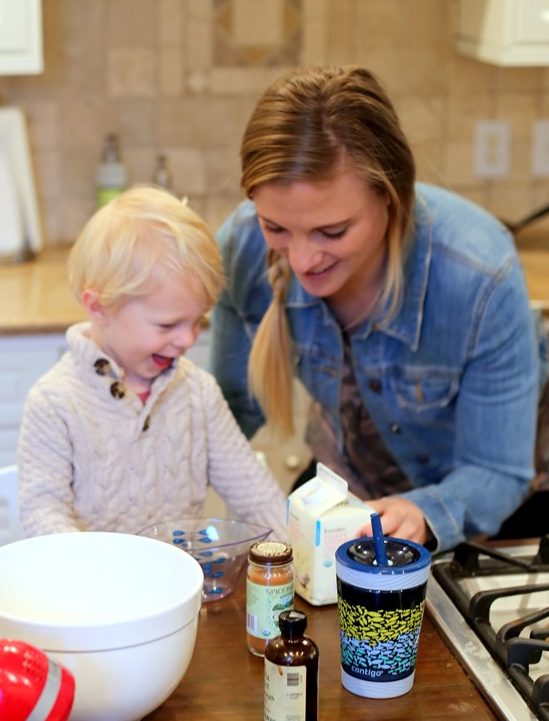 Don’t care what kind of vegetables you include in your vegetable lasagna? Ask your little one their opinion! Chase always has a strong opinion about what I should add to a recipe whenever I ask him and I think he likes feeling like his thoughts matter and that he has a real say in how we cook and bake together. And since 3.5 year olds laugh at everything, sometimes I ask him silly questions like, “Do you think we should add ice cream to our quesadillas?” which will make him look at me with wide eyes before laughing and saying something like, ” NOOO! Silly Mom!”

Chase has always been a fan of seek-and-find books and games so picking seeds out of everything from a spaghetti squash or an acorn squash to a bell pepper is right up his alley. (I will usually pre-scoop out the seeds from a larger squash so there aren’t too many remaining for him to tackle.) It’s one of those tasks I personally detest but Chase thinks is oddly fun and I love that it’s great for fine motor skill development, too! Don’t expect this one to occupy your little one for long, but it seems to entertain them for a little while at least. 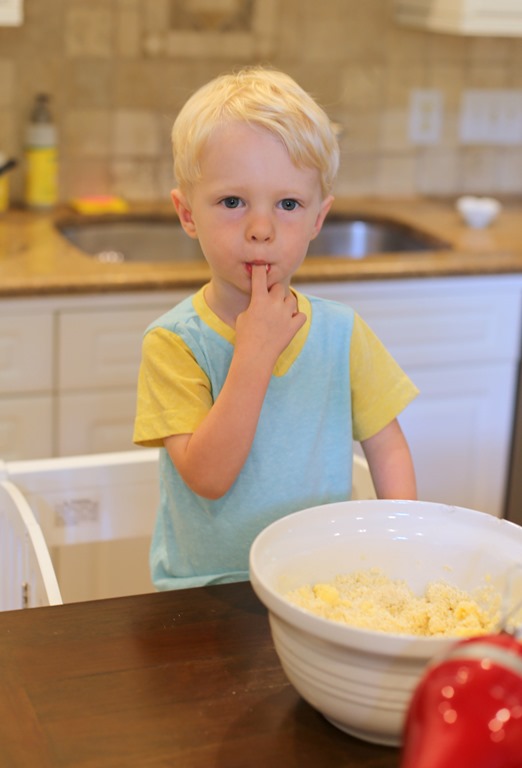 This one might not appeal to some people but since I’m far from a germaphobe and tend to lean toward the “a little dirt won’t hurt” mentality, I don’t have any problem with Chase taking little tastes of our food while we’re cooking with his freshly-washed hands, as long as it’s something only he or our family will be eating together. (We also do a lot of hand-washing during the cooking process since he’s a kid who doesn’t like dirty or sticky hands.)

While things like cookie dough and muffin batter are obvious hits, I’ve been surprised at Chase’s excitement and enthusiasm over trying different spices we use in recipes as well as sauces, homemade nut butters and more. He’s a naturally curious child and while he’s never been a kid with a giant appetite, I do think that helping me cook in the kitchen is to thank for his interest in trying a variety of foods, even if he’ll often say, “I don’t like that very much.” As a mom who hopes to raise a healthy eater, you better believe I’m psyched when he asks to try foods like zucchini or starfruit. 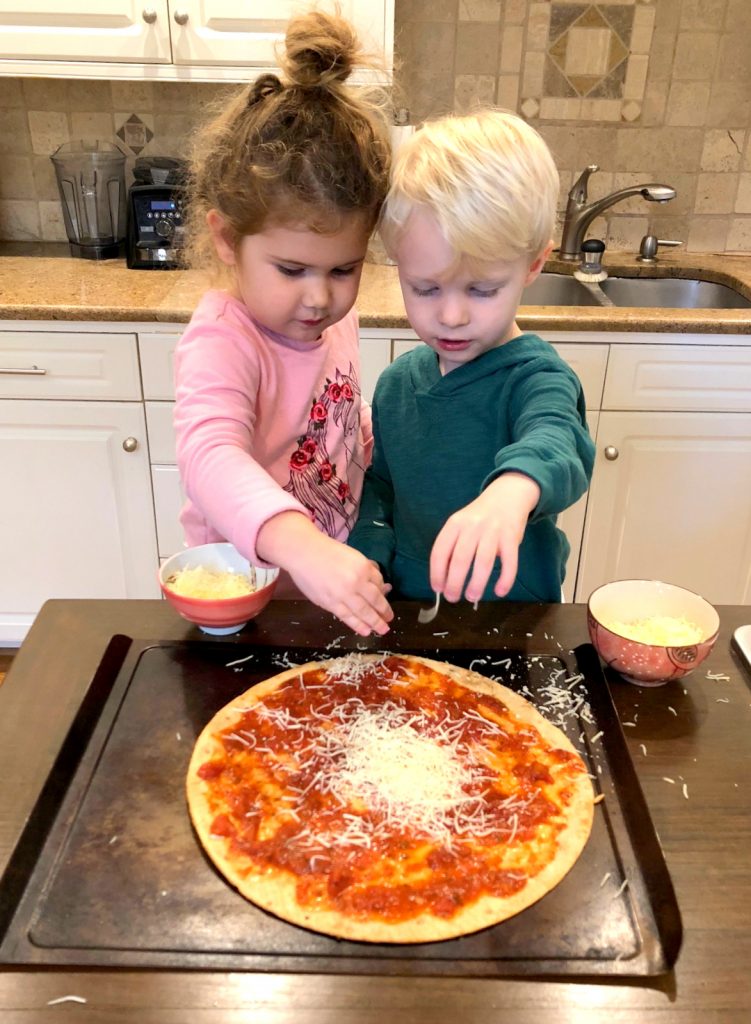 Any recipe that calls for sprinkling something like cheese, nuts, fresh herbs, chopped vegetables or sliced fruit over the top of a dish is toddler gold!  I’ll often put a large amount of whatever ingredient needs to be “sprinkled” into a bowl for Chase and let him be the designated sprinkler. Naturally he loves this task when it comes to making our own pizzas because pizza, but he’s often pretty enthusiastic about sprinkling just about any ingredient all over a big dish or pan.

Letting a two or  three-year-old “help” with washing dishes is basically a recipe for something I like to call “swamp floor” but I’ve become a lot more laid back about a water-related mess since it’s incredibly easy to wipe up. Plus, setting Chase up at the sink to “wash” dishes often thoroughly entertains him while I wrap up the rest of a recipe. I like to lay a towel down around his cooking stand when I set him up at the counter and then I fill a bowl with warm soapy water and ask for his help “washing” measuring cups, spoons and other toddler-safe kitchen supplies. I like to tell myself this is also training Chase to clean up after cooking but I’m pretty sure he just thinks of it as some kind of awesome version of bath time in his clothes.

Chase loves paging through my magazines and using scissors to cut out various pictures so when I’m done with a magazine that has recipes in it, I’ll often let him go to town and cut it up. It was during one of these magazine cutting sprees that I told him to let me know if he saw a yummy recipe he might like to make together on one of the pages. Of course he naturally picked an advertisement for some kind of a kid’s dessert treat but we eventually he saw a recipe for a smoothie that appealed to him so we ripped out the page and put it in “Mom’s special recipe folder” and then I pulled it out one day for us to make together. He remembered finding the recipe himself and I think that made him all the more excited to make it with me a few days later. 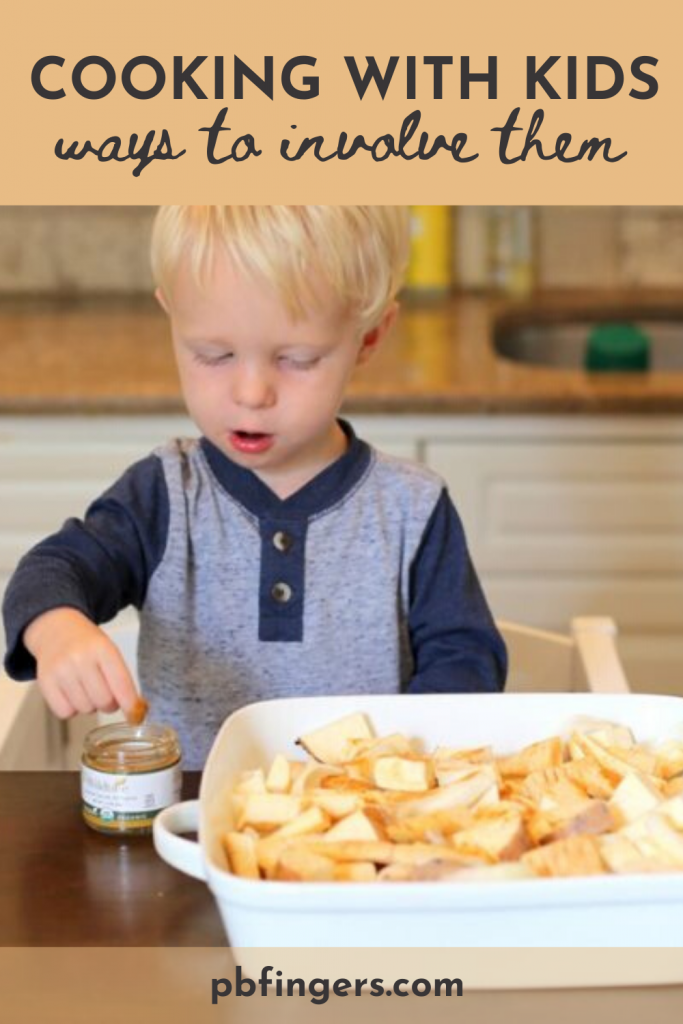 Do you ever incorporate your kids into fun in the kitchen? What are some of your favorite ways to cook or bake with little ones?

Any favorite kid-friendly recipes your little ones love to make with you? 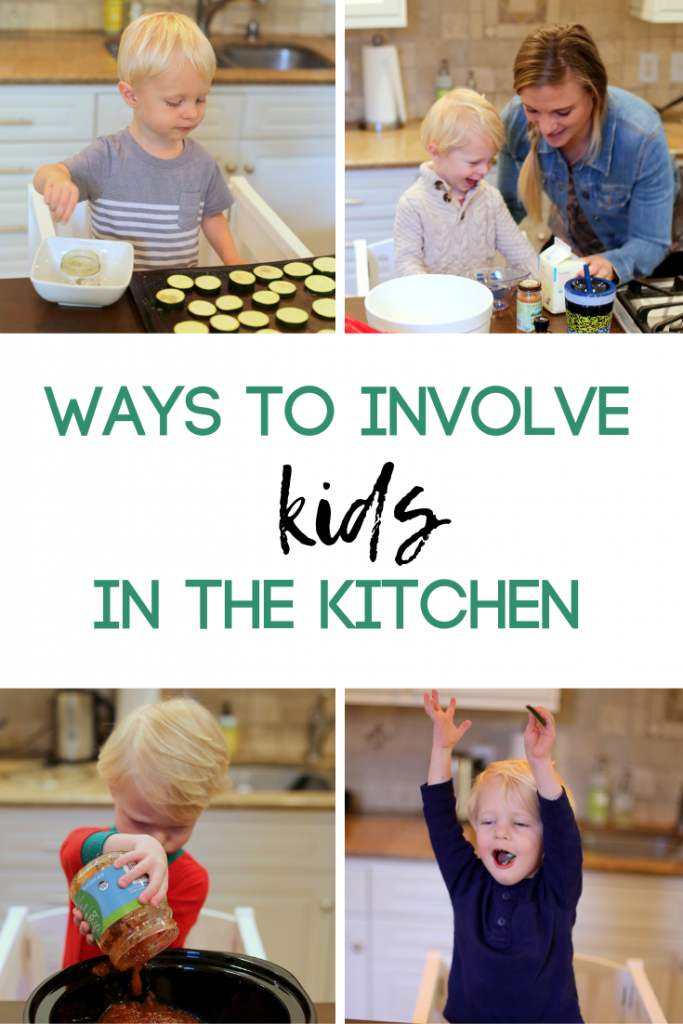