Navigation
Helloooo! How is everyone doing out there? Our week has been a decent one so far and the days have passed in a blur of weekday craziness that included working, toddler chasing, volunteering at Serenity House and reading a new book that had me all kinds of FREAKED OUT and intrigued. (More on that below!)

Since I don’t feel like I’ve really had a chance to chat with you guys since Monday, I wanted to stop by today to share a quick glimpse into our Wednesday. It wasn’t anything special but sometimes it’s the day-to-day normal life stuff I find myself drawn to writing and reading about most.

My morning began like most mornings do around here with a quick and easy breakfast that I ate while working my way through my devotionals. I made myself a bowl of triple chocolate protein oatmeal (served in a glass storage container because all of our bowls were in the dishwasher) and loved every chocolaty bite! 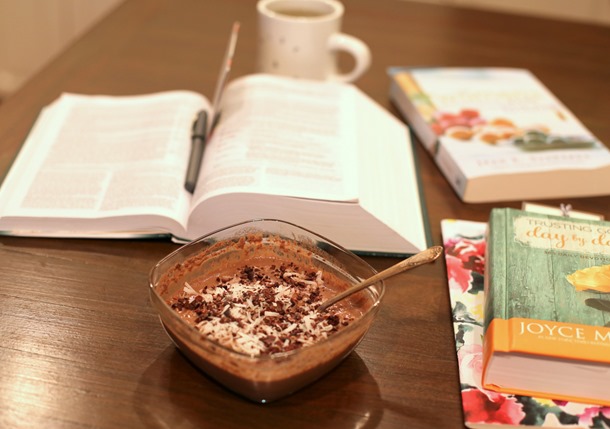 I’ve had a few people ask about the devotionals I’m doing right now and I’m actually making my way through two. The Women’s Devotional Guide to the Bible is the one I’m loosely following that actually gets me reading my Bible. (I have the Life Application Bible which is FABULOUS for anyone who needs serious help deciphering scripture… ME!) When I say I’m loosely following the women’s devotional, I mean it. The devotional is quite intense and I use it more or less as a reading plan that I break up over the course of a week. Trusting God Day by Day is a much faster, easier devotional featuring a new scripture everyday, followed by a few paragraphs from Joyce Meyer breaking the scripture down, applying it to real life and diving into it a little deeper.

Once I wrapped up my devotional, said goodbye to Ryan and got about 30 minutes of work done, Chase was up for the day and ready for mom’s attention. When I heard him making noise on the monitor, I went into overdrive and packed his lunch for preschool but left half of his peanut butter and jelly sandwich on the counter in plain view. You can probably guess what instantly became his breakfast when he caught sight of the sandwich… 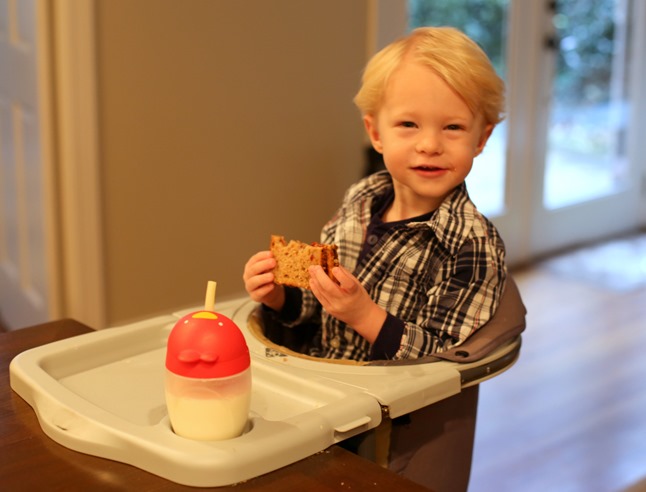 Plus some sliced strawberries and blackberries on the side!

I wanted to report back here on some of the struggles we’ve had related to battling Chase’s strong will and rapidly-increasing preferences and opinions that center around everything from getting dressed and going to bed to leaving the house, diaper change protests and more. For a solid month or so now, I’ve felt like I’ve been going into battle with a two-year-old multiple times a day for one reason or another. Whether it’s forcing Chase to wear anything other than his reindeer footie pajamas (the HORROR) or telling him we have to leave the house when he’s 100 percent enamored with his trains, I’ve felt completely exhausted by the end of the day multiple days a week. Fortunately, I’m slooowly beginning to see some light at the end of the tunnel (sometimes) and I owe a lot of it to DISTRACTIONS.

Chase’s curiosity is at an all-time high and he feeds off my moods and my excitement so I’ve been trying my best to approach certain situations that often escalate into battles with a distraction on hand and ridiculous mom enthusiasm. Here are a few examples:

Of course these don’t work like a charm every time, but they are helping a bit so I wanted to pass them on just in case any of you out there are in the phase of toddler meltdowns, too! And if you guys have any tips for handling toddler meltdowns, I’m all ears!

Chase and I managed to get out the door without too much of a struggle (thank you, Orange Monster!) and made it to preschool on time. He ran into his classroom without so much as a “See ya, Mom” and I headed off to Burn Boot Camp for a workout with my friend Laura.

We went through a leg workout that ended up being a serious booty burner! 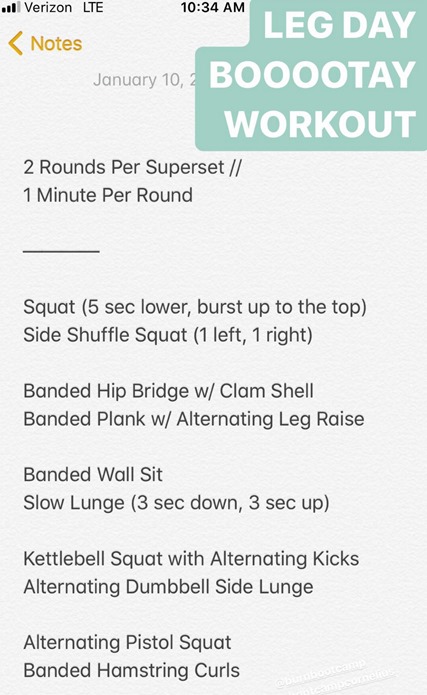 My glutes were on fie-ah after that one!

After the gym, I rushed home, ate an RXBar and went into blogger mode, quickly assembling everything for a mini food photo shoot for a crock pot recipe I hope to share on the blog next week. I made the recipe earlier in the week, so it just needed to be photographed which made the process much faster than usual. Phew! 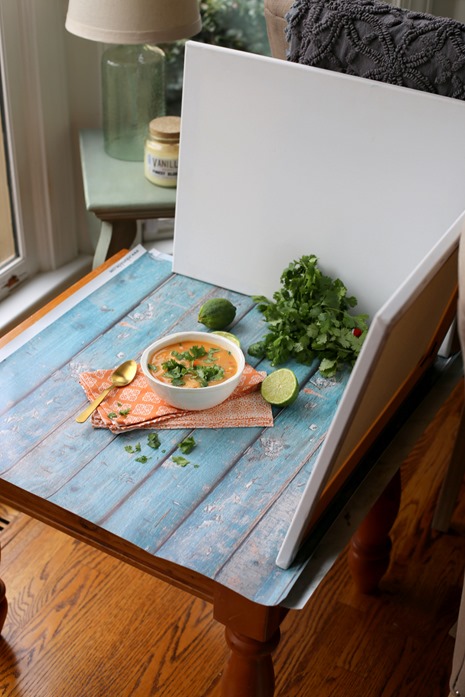 After snapping a ridiculous number of pictures, I sat down at the computer to do some photo editing and responded to a few emails before I couldn’t ignore my body’s need for a shower any longer. I quickly showered, worked on the computer for a little longer and then made myself a smoothie that looked like a gray cloud of despair. 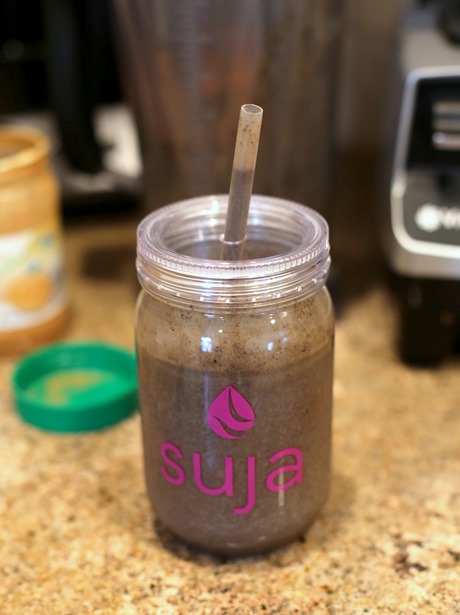 With smoothie in hand, I headed off to a quick 10-minute eyebrow appointment before it was time to pick Chase up from preschool.

A little over a month ago, I got my eyebrows done for the very first time in my entire life and I’m SOLD. I hope to keep up with them as much as possible and notice a huge difference not only from the waxing/shaping but from the tint! The tint has been KEY for me as a natural blonde. I was always so terrified to do anything to my brows because they’re so light and I worried that waxing them would make them disappear but the tint has been a game-changer.

Here’s a before/after from yesterday’s appointment: 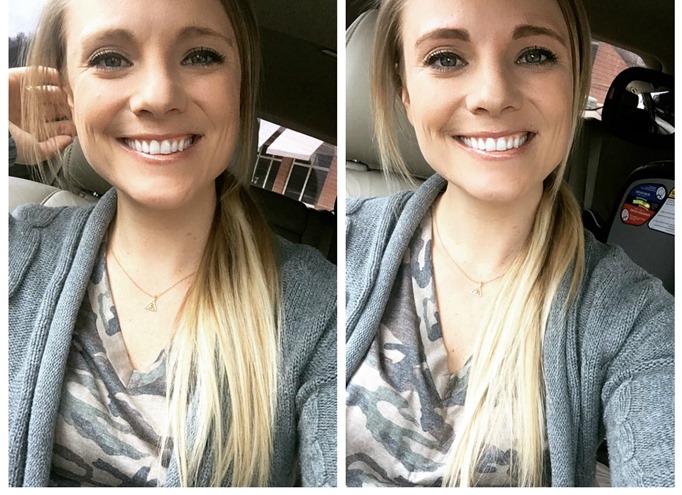 I’m far from having enviable eyebrows but I think it’s an improvement! (Note: Both the before and after are photographed without any eyebrow makeup/fillers.)

I picked up from Chase immediately following my appointment and we headed home for an early afternoon snack, playtime at his train table and a reading of Green Eggs and Ham before nap. 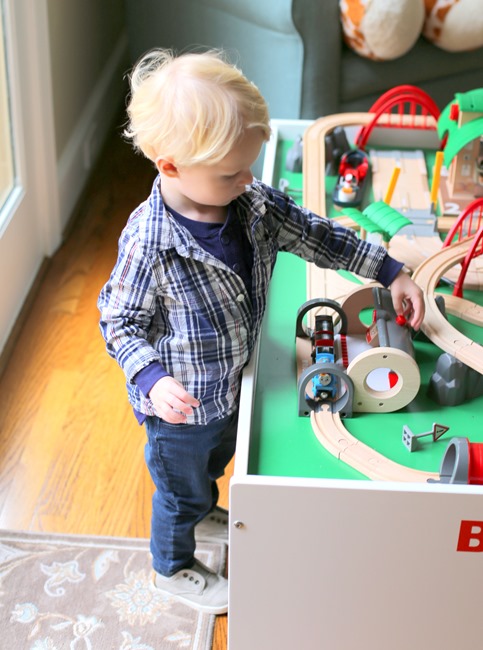 And yes, we are now the family who has a GIANT giraffe and a GIANT train table in their living room. 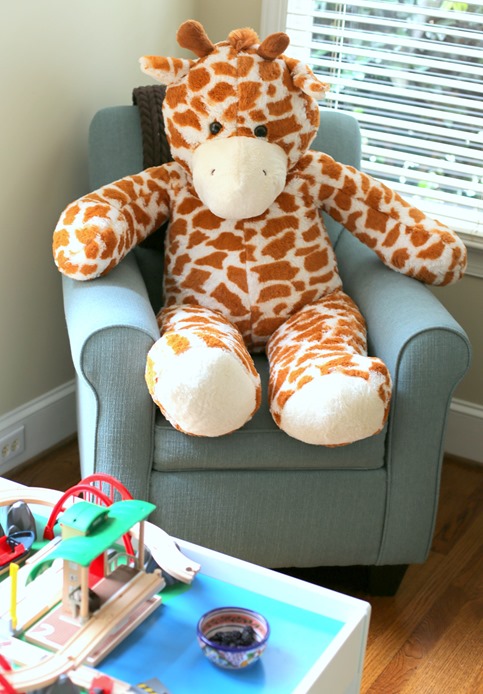 Thankfully Chase went down semi-easily and I was able to make myself lunch (reheated crock pot leftovers) and knock out some additional work for about 90 minutes before he was up again. 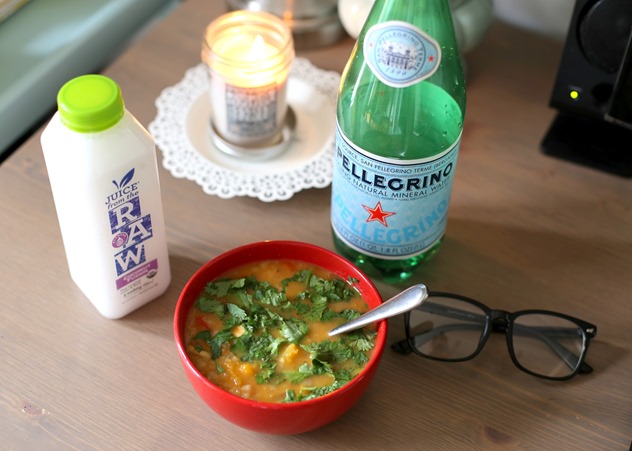 Once Chase was up, we spent the rest of the afternoon at home, making cupcakes for a birthday party play date we have on the agenda this afternoon, playing and doing some household chores in preparation for my father-in-law’s visit later today. Ryan arrived home from work right in time for us to pile into his car and head out to an event we had at our church in the early evening.

The event included dinner (totally forgot about that one when I made this week’s meal plan) so we filled up on baked ziti while we learned about child dedication.

When we arrived back home, we did an express version of Chase’s bath before settling him in his crib. Ryan and I climbed into bed a little after 9 p.m. and then I read my face off because I absolutely could not put Final Girls down. 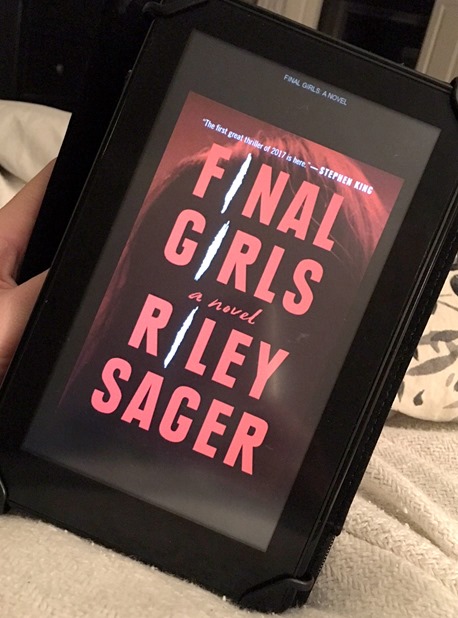 After I mentioned feeling less-than-enthused about the previous book I read on the blog, both Courtney and Heather highly recommended Final Girls to me, saying they both read it in only two days because it was so suspenseful. Well, apparently this book has a two-day reading window because after beginning it on Tuesday night, I ended up reading for waaay too long last and also finished it in two days. Talk about a page-turner! I’ll share more about it in tomorrow’s Things I’m Loving Friday post, but it was a GOOD one.

Now I’m off to the gym to squeeze in a quick workout before welcoming my father-in-law in town today! Hope you guys all have a great Thursday!